As Students Protest Against ABVP, Gurmehar Kaur Withdraws From Campaign After Threats

Delhi University student Gurmehar Kaur has withdrawn from a protest march against campus violence and has decided to leave Delhi. 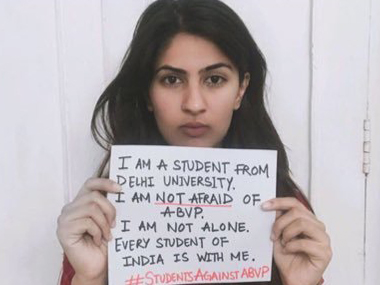 New Delhi: Delhi University student Gurmehar Kaur, who has face threats and intimidation after participating in a social media campaign against the RSS-affiliated Akhil Bhartiya Vidyarthi Parishad (ABVP), withdrew from a protest march against campus violence and has decided to leave Delhi, NDTV reported.

Following violent clashes at Ramjas College instigated by the ABVP, Kaur had changed her Facebook profile picture to one showing her holding a placard that read: “I am a student from Delhi University. I am not afraid of ABVP. I am not alone. Every student of India is with me. #StudentsAgainstABVP.”

But after being subjected to repeated threats and harassment, Kaur withdrew from the student campaign. She expressed her sentiments in a series of tweets, encouraging people to attend the protest march in spite of her absence.

I’m withdrawing from the campaign. Congratulations everyone. I request to be left alone. I said what I had to say.. (1/2)

The campaign is about students and not about me. Please go to the March in huge numbers. Best of luck.

To anyone questioning my courage and bravery.. I’ve shown more than enough

The 20-year-old was given police protection yesterday after she received rape threats, allegedly from ABVP members, over her Facebook post. The Delhi police has also registered an FIR against unknown persons over the threats, the New Indian Express reported.

On February 21, the ABVP accused Ramjas College of promoting “anti-national activities” after it invited JNU student Umar Khalid, who was accused of sedition last year, to speak at a seminar titled “Cultures of Protest”. A day later, the ABVP clashed with students protesting the manner in which it had disrupted the event the previous day. In response, students from Delhi University and JNU are holding a protest march today (February 28), captured by The Wire on the ground.

Also read: ‘We Beat Teachers Too’: True Confessions of an ABVP Footsoldier

Kaur, the daughter of a soldier killed during a counter-insurgency operation in Kashmir, has also been targeted for a video she made last year in which she appealed for peace between India and Pakistan with messages on placards. One placard she held read: “Pakistan did not kill my dad, war killed him”. This, she said, was a lesson her mother taught her as part of her efforts to get Gurmehar to let go of the irrational hate – towards Pakistanis, and even towards Muslims – that she had felt as young girl when she learnt of how her father had died.  Although her video had been praised at the time, in light of her protest against the ABVP Kaur faced intense social media backlash from many prominent figures and others who picked on the particular comment from the video and presented it out of context.

Who's polluting this young girl's mind? A strong Arm Force prevents a war. India never attacked anyone but a weak India was always invaded. https://t.co/gXHkAGi9sh

In his ‘Jan Ki Baat’ series for The Wire Hindi, Vinod Dua discussed the social media backlash Kaur faced for her video, linking it to the collapse of free speech and the threat posed to democracy.

On the other hand, political figures such as Delhi chief minister Arvind Kejriwal came out in support of Kaur. Kejriwal tweeted that he would demand action against “ABVP goondaism and rape threats” upon meeting Lieutenant Governor Anil Baijal. While sharing Kaur’s statement, he wrote:

Just listen to this. THIS is BJP. They will destroy our country. Everyone must rise against their goondaism https://t.co/MoFm8wSMqD

Meanwhile, teachers at Lady Shri Ram College have voiced their support for Kaur, Firstpost reported. “We unequivocally and strongly support our student Gurmehar Kaur and her right to express her opinion on issues that embroil our university,” faculty members of the English Department said.

“It is immensely gratifying to us as her teachers that she has responded sensitively, creatively and bravely to events in her immediate context rather than seek the safe refuge of silence,” the statement said.