Why I Started a Free Roadside Library in Rural Arunachal

Next time you visit Nirjuli, please drop by our standing library and perhaps donate a book or two to this temple of learning. Nirjuli, Arunachal Pradesh: I am here to tell you a story that is both mine, and also a reality for many young people growing up in the tribal societies in the border state of Arunachal Pradesh.

Early this month, I started a roadside free library in Nirjuli, in the state’s Papum Pare district, for the children of my community, but more on it later.

Arunachal is a young state – it became one only in 1987 after years of being a Union territory. Prior to that, it was called the North-East Frontier Agency (NEFA). Three of its borders are international.

Like other states, we too have no dearth of potential in our youth. The internet is a fairly new phenomenon in our society and can help us grow and catch up with modernity. But I reckon that we may have skipped a few stages in between. The speed at which we Arunachalees are ‘developing’ is alarming to my mind. The literacy rate is staggeringly low, and every year, the poor performance of the school-goers baffles me.

The ‘development’ model that has been adopted for the state has been such that it is no surprise that today there are more wine shops and bars than book stores. Not everyone has access to the state’s central libraries; connectivity is dismal and our road conditions are terrible, especially during the monsoons. Rampant corruption and poor management of resources are a few of the reasons for this state of affairs. Come elections and we get drawn into tall promises by the candidates; the culture of money power and clan politics takes over once again, and issues of development take a backseat.

Also read: Eavesdropping on Past Readers: A Bibliophile’s Affair With Second-Hand Books

I am the first woman from my family to pursue a higher education. As a tribal kid growing up in the border state, I had little access to books and libraries. Reading and writing were limited activities and confined only to classroom textbooks. Although we have a few government libraries in the state, my siblings and I never had the chance to visit any during our childhood. My mother is unlettered and my father who is no more, had managed to somehow study in a government secondary school in a remote village, Nyapin, in the state’s Kurung Kumey district. In the late 1980s, after my father failed to pass Class X, the family migrated from the village to Kimin. My parents were married in the traditional custom of my community, Nyishi, as teenagers. Few years later, I was born – the oldest of their five children.

My father, the late Ngurang Pinch, thrived despite his poverty. He was always reading, learning, inquiring. His resilient attitude made him an excellent orator and social worker. I admired his spirit and his passion, I wanted to be just like him. He introduced me to non-fiction books during my school days as he was travelling for his political work then – he was an MLA from the Doimukh constituency of the state – and that had exposed him to books.

The Treasure Island by Robert Louis was one of the first books that gripped me; it took me on an adventurous journey with the one-legged Captain Long John Silver, motivated me to challenge my imagination and creativity.

Just like my siblings, I, my friends and relatives didn’t have easy access to books and libraries; reading and writing was seen as an elite affair. Although a few from the state today can afford to go to private schools and universities outside the state, many still struggle to cope with the outside world. Some return home with their unfinished education. Those who wish to continue studying in the state often don’t get family guidance and support; many young boys and girls fail to pick a career.

Also read: How Lockdown Fundamentally Changed the Way I Read

Parents’ apathy towards their children’s education is one of the primary reasons behind low literacy among tribal students, especially women, in the state. Many young women, seen as liabilities, are advised to get married early. With illiterate parents, and at times witnessing domestic violence, many women anyway don’t have access to a conducive environment to read a book for leisure or to study. Over the years, all these factors have put adolescents in my community at an educational disadvantage.

This library is for my community

I run a non-profit, Ngurang Learning Institute, along with my partner and siblings. My non-profit works to impart adult education to men and women of all age, but my primary focus has been women. It was my mother’s plight as an illiterate person that compelled me to start the endeavour. Some months ago, while browsing my Facebook feed, I came across a street library in Mizoram. It was a quaint little wooden shelf attached to a wall stacked with books. Iron sheets were planked on the top to protect the books from rain and sun. I was fascinated by the idea of a roadside public library for free, where a passer-by could choose to grab a book and engage with it for a few hours.

I thought of how I had benefitted from reading so many books. As a social worker and an activist in a remote place, a great part of my learning, apart from my ground experiences, has come from books. As the former US President Barack Obama in his 2005 speech, Literary and Education in 21st Century Economy, had said, “Reading is the gateway skill that makes all other learning possible,” Books teach us and they open a world to us and help form our opinion; they influence our social and political actions.

Also read: A Brief History of Reading: The Innate Joy of Second-Hand Books

During the lockdown, with all the free time that we had in our hands, I began to check what the youngsters in my neighbourhood were up to. I had a lot of catching up to do with my old books as well. One would often find young ones spending more time on their smartphones playing online games or updating their social media profiles. You will also spot many by the riverside whiling away their time, especially during the summer breaks.

I firmed up my mind to introduce them to books. I spent close to ten thousand rupees to purchase new books to add to my old collection. I spent another ten thousand bucks to procure the wood, paint and tin sheets required by a mason to make a standing library.

It’s been a few days since the library has been functional. I see young ones curious but a little shy being seen spending time with the books. It’s a new experience for many of them. I am luring them into the joys of reading by distributing chocolates! But that’s not the right strategy in the long run, I know. 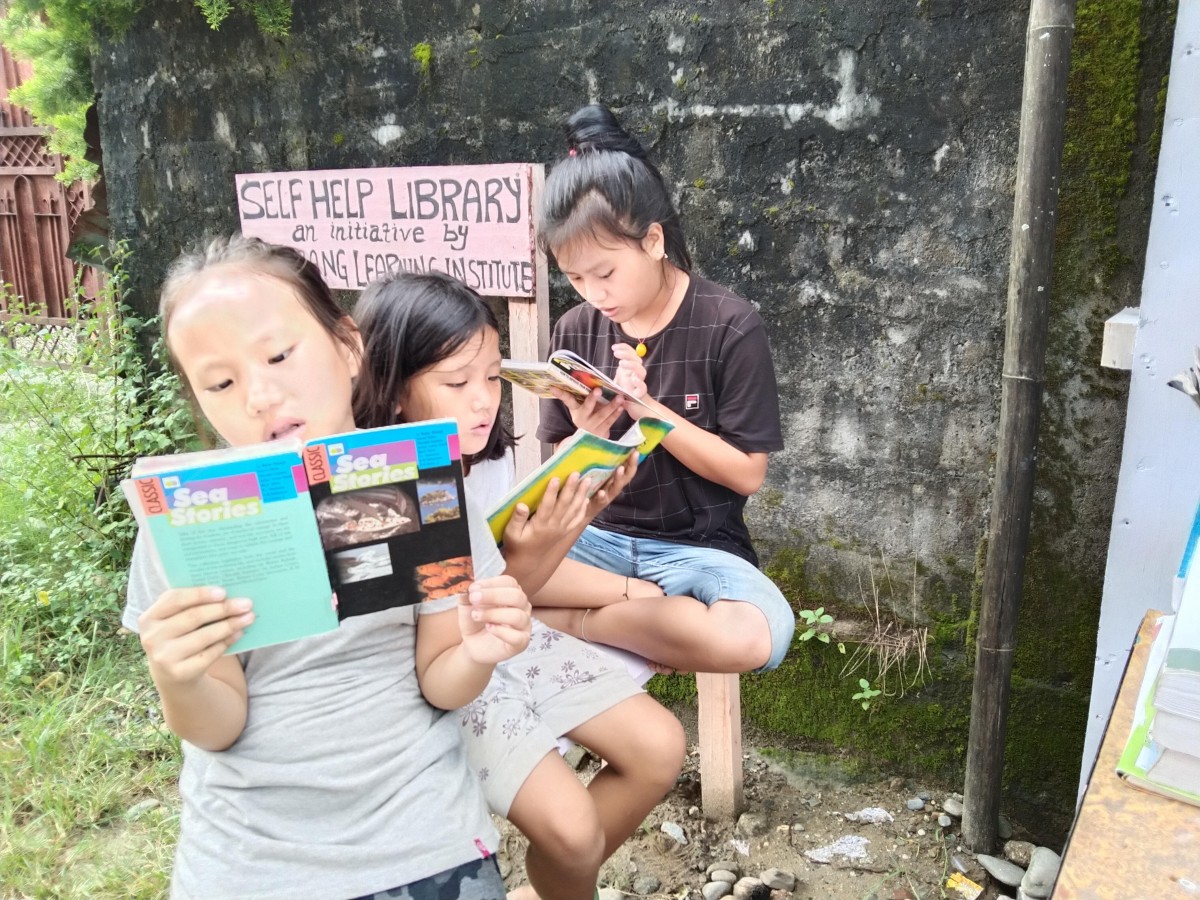 I know that it is also important to note that we are what our environment makes us. It is the responsibility of parents as well to talk to their children about their love for knowledge, give them the love and guidance they need and inculcate a habit of reading in them. If a book looks intimidating, one can begin by reading a newspaper, a magazine or even a comic book. Reading is fun, it shouldn’t be seen as a chore. The message must be drilled in at home. The earlier the better.

Visiting my library, activist Likha Tacho associated with the Green Arunachal Multipurpose Society (GAMS), said, “Reading ignites our power of imagination beyond human limit and induces in us an artistic approach towards life and can boost creativity”.

Another local activist Toko Rebia shared my vision of a free library and how it would help the deprived sections of our tribal society. A student, Pakyum Talop, after visiting the library felt reading would help him improve his vocabulary and develop a personality which may not be possible only through classroom reading.

The words are encouraging. For some days now, I wake up thinking I may have done something right. Next time you visit Nirjuli, please drop by our standing library and perhaps donate a book or two to this temple of learning.

Ngurang Meena is an educator and a social activist based in Arunachal Pradesh. She is also the founder of the Ngurang Learning Institute.