A Prayer and a Love Poem For Our Stricken World

Through a combination of stunning digital images and poetry, layered and reflective, Kashmiri artist Masood Hussain and Irish poet Gabriel Rosenstock explore what it means to be human in a world contoured by a pandemic. 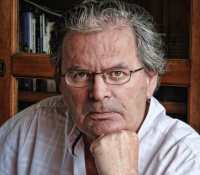 Almost a year ago, when artist Masood Hussain and writer, poet and haikuist Gabriel Rosenstock collaborated on the book, Walk with Gandhi, with Masood creating his jewel-like water colour illustrations in Srinagar and Rosenstock composing his haiku and commentary in Dublin, it inaugurated a friendship where one nudged the other to come up with references and associations from different times and cultures.

A week ago, Masood sent Rosenstock the first batch of digital images he had created in response to the new coronavirus pandemic – potent images with a sense of a familiar world become alien all of a sudden, with dislocations and distancing that is making many ask if the world will ever be the same again. Rosenstock responded spontaneously to the images, in prose and poetry (in English and Irish).

It is often said that our perception of the world – and our place in the universe – was changed, irrevocably, by a photograph of our planet taken from outer space. It showed our vulnerability and our isolation in the Milky Way. It was a lonely image in many ways, calling out for love and solidarity among the peoples of the earth.

I was reminded of that image a few days ago when Srinagar-based artist Masood Hussain sent me one of the several digital images he had created in the wake of the COVID-19 pandemic. It was a powerful image of our world in chains. There it was again, this world of ours, floating in space, its seas and land masses enchained. 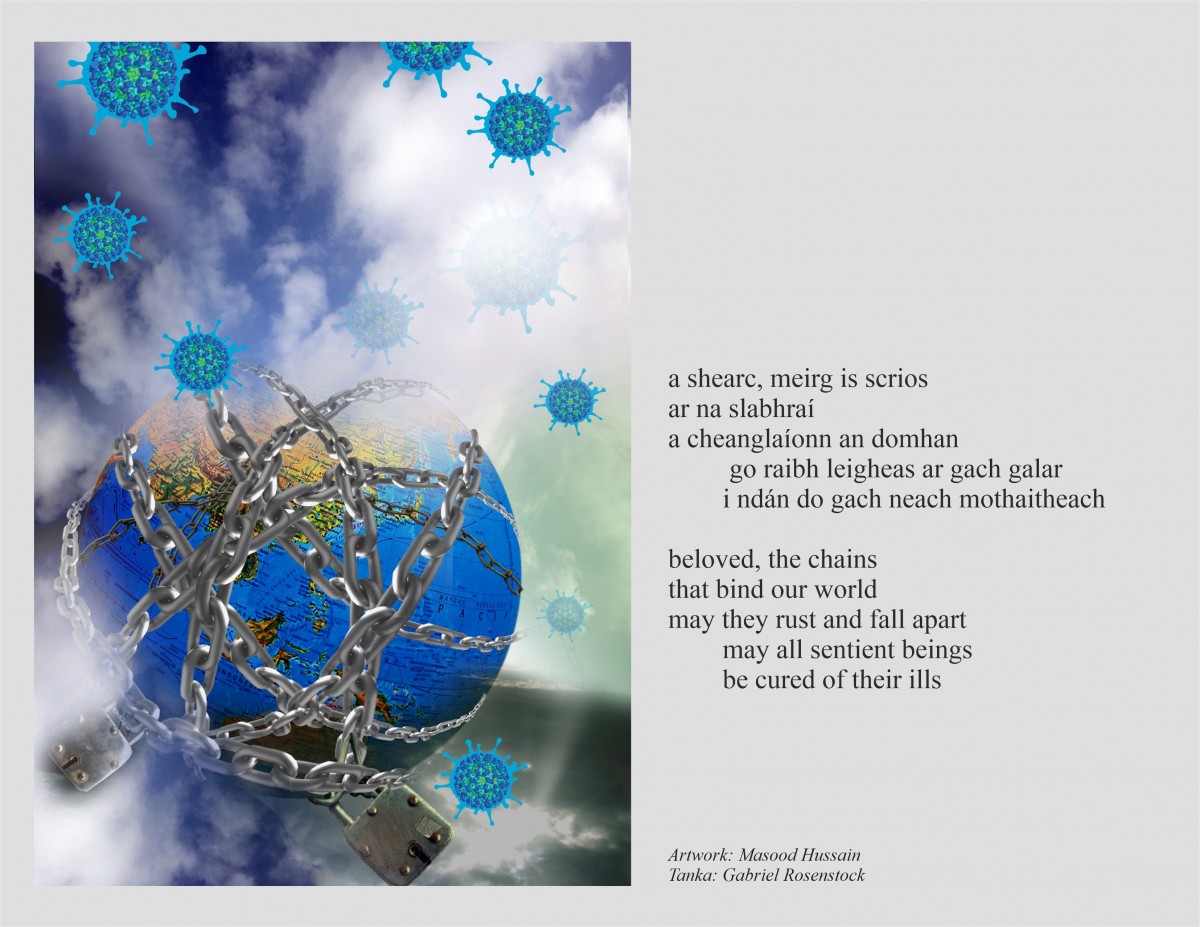 Last year when Masood and I were working on our book, Walk with Gandhi, in the final stages of the project we lost touch with each other – Masood was isolated from the world due to the lockdown imposed by the Indian government following the abrogation of Kashmir’s special constitutional status.

This time when I heard from him there were lockdowns threatening the whole world due to the new coronavirus pandemic!

Masood’s image struck me as something almost out of the futuristic imagination of H.G. Wells, the virus as an alien force, hovering with malign intent. I wrote a spontaneous tanka (one of the oldest forms of poetry in the world) in response to Masood’s image – a five-line love poem that could also be described as a poem-prayer, in Irish and English: beloved, the chains/that bind our world/may they rust and fall apart/may all sentient beings/be cured of their ills.

Also read: How a Pandemic Shattered the Harmony of Medieval Europe’s Diverse Cities

Why a love poem and why a poem-prayer? The answer is obvious, I think. What else is there to turn to in our self-isolation, whether in Kashmir or in Ireland, but love and our longing to be free.

The tanka, which stretches back over 1,300 years to its origin in Japan, is being fashioned to this day. Using such an old form of poetry – for the first time in Irish – tells us something about the resilience and universality of poetry and its ability to come in from the margins in times of crisis and helplessness and speak to us, citizen to citizen, heart to heart, on this planet of ours. Masood’s image of the bare, lifeless tree is chilling: we are all of us that child looking out and wondering what the next few weeks and the next few months will bring.

What will tomorrow’s world look like?
Will the sword – and the lathi! – become a ploughshare?
Who will rule the world – citizens or multi-national corporations?
There seems to be a general consensus that the world will never be the same again. But I wonder. In what way will it be different? There are as many prophets of doom to be heard these days as apostles of hope. In Masood’s first digital image – our world in chains – the frontiers of modern nation states were not very visible. Our world seemed to be a borderless globe.

But what do I mean by our world? Isn’t that wishful thinking?
Who owns the world?
Who wields the power – and the lathi?
Who owns the media? How much propaganda is behind not only the news but all forms of art and entertainment? Even something as seemingly innocuous as the BBC’s Antiques Roadshow is dripping with propaganda and cloying nostalgia for empire!

“No man is good enough to be another man’s master,” said William Morris, that visionary figure of Victorian Britain – textile designer, novelist, poet and socialist – who was such a radical force in the British arts and crafts movement. His statement is something I hold to be important and true. I passionately hope it will be the clarion call for tomorrow – as we think of a new world – and for ages to come as a true mark of our humanity.

Gabriel Rosenstock is a bilingual poet and author from post-colonial Ireland who has chosen the Irish language, which could be classified as endangered, as his literary medium of choice. Among his recent works is Walk with Gandhi, a book of haiku, with commentary, illustrated by Kashmiri artist Masood Hussain, and a volume of poems, Glengower: Poems for No One in Irish and English (The Onslaught Press).