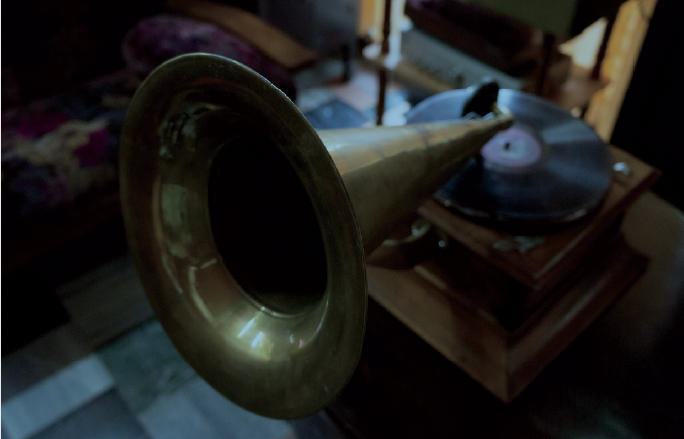 An old gramophone player with horn

In this age of digital media, gramophone records are a forgotten artifact, known only to older generations. But there are passionate collectors of old records all over the world. And early recordings of Indian music are in great demand not just in this country but abroad too. In 2012, Robert Millis came to India to study the Indian recording industry through the eyes of collectors and sound artists. His quest took him not just to the tucked away rooms of collectors but also to dusty antique shops. The result is Indian Talking Machine, a 244-page book featuring not just two CDs of the music he found but also over 300 photographs of record covers, labels and other ephemera. Millis tells The Wire about his quest and the joy of finding rare recordings.

Why did you choose this most interesting project?

In a way the project chose me. I had been collecting American 78 rpm shellac records for some time. I had and still have a fascination with American folk and traditional music; but I was also interested in traditional and classical music from all over the world, especially Asia. I knew a little about the history of recording in India and had a desire to learn more about India’s music but felt I did not have an entry point. Then it occurred to me that I should go to India and spend some time with Indian collectors and learn through them. Perhaps a little like India’s famed musical student/guru relationship. Before you set out to research this, did you know anything about the Indian recording industry?

Yes. I pursue a lot of interests around music and art: I am a musician, I produce records, I enjoy the act of recording. In many ways I am at heart a “sound artist”–I have produced and composed experimental music, made some soundtracks and music for dance and theater performances and worked with artists and museums on sound installations. So it was only natural to me to have an interest in the history of recording, the history of the field I was involved in. I had read of course about Frederick Gaisberg, essentially the world’s first record producer. Gaisberg had been Emile Berliner’s assistant (Berliner, inspired by Edison, had invented flat disc records in the 1890s-the “record” as we know and love today) and was dispatched to record first in Europe and eventually in Asia. Visiting India, Japan, China and Burma in 1902-1903, he made the first commercial recordings of music in these countries. What an adventure that must have been, in 1902. As a traveler myself I was very inspired by these early recording expeditions and wanted to know more.

India, as you know, began producing records quite early. In this respect, how was it different from other countries?

It is important that India had its own record pressing plant established in Calcutta about 1908, by His Masters Voice–records from all over Asia were manufactured there. There should be an archive and museum established at the old pressing plant–so much important and unusual music passed through those doors. Such a valuable treasure trove of material for an important time in the history of the world.

In my mind it is not so much how early recording came to India–but how quickly India took to it, how quickly artists (such as Gauhar Jan) became celebrities, how records influenced the music and fed into the film industry later, how many records were produced, how many artists were recorded.

How easy was it to find old records/memorablia?

Once you start asking, it is very easy. Certain towns and cities have antique and junk markets–that is always a good place to start. A private collection of old records

You do know that there is a community of collectors here. Did you work with any of them?

Of course, that was the point of coming to India. I first met Suresh Chandvankar who has an organization called “The Society of Indian Record Collectors”, from him I met others, from them I met more.

What unique features did you find in the early records? For example, the artiste giving her name before she begins singing.

There are many unique features. The announcements by the artists (at the end of the record, actually) are very endearing and interesting–they reveal a lot about how the world must have perceived records at that time, how the artists felt the need to “sign” their recordings. But also it is interesting to hear how good artists can compress a raga down to three minutes (78rpm shellac records play only for about 3 minutes), or how certain instruments had to be substituted because they did not record very well or how versatile artists overcame the limitations of early recording. The effect of recording on music itself is fascinating, much like the effect writing must have had on speech, or the printing press on culture

I see time in these objects, ancient and near history, a moment when a strange device–the record player–came to a country and turned it on its head practically overnight. It was interesting to explore how people lived with and stored their records, how collecting passions revealed themselves on a personal level.

How did playback singing, which is unique to India, affect the recording industry here?

My specialty is really with early recording and shellac discs, not so much with film music. I love film music too, of course–but the question of playback singing could easily fill another book. Perhaps that’s my next project!

Not that easy. Not many have survived in good shape–most are with collectors or have been destroyed. We are talking about objects that are over 100 years old and were always considered disposable anyway. When LPs and cassettes became available, you threw out your shellac discs. Now with CDs and digital music, LPs are thrown away…it is an endless cycle.

But also, “value” and “significant” mean different things to different people. There are very few old Indian records in the USA, so in that sense they are all valuable…to the right crazy people (like me) who want them! Author and collector Robert Millis outside an antique dealer’s shop

Tell us about some of your best discoveries.

Finding the first discs by great vocalists like Babu Aghor Nath Chuckerbutty or Gauhar Jan was amazing. These people recorded in 1902-1925, the age of “acoustic” recording. Electric microphones were invented in 1925, so before that you had to have a power in your voice and great artistry to project emotion and feeling into a song.

Finding perhaps the first esraj disc recorded in India (about 1906) by Professor NM Chuckerbutty. Finding any obscure regional labels (such as Bang-o-phone from present day Pakistan) and discovering music I had never heard before…the list goes on, and is still going on. There seems to always be more to learn.

The book is a visual delight. In addition you have produced a CD with some great music. Who is this book aimed at?

Thanks! I did not want to make something that was simply history, or simply about Indian music, or simply about collecting. I wanted the music and the photos and writing to speak for themselves and have some sort of related yet independent narrative. To my knowledge there are almost no releases of Indian music which cover so much territory–instrumental, vocal, north, south…usually releases of such music concentrate on one style, for better or worse. I wanted this book to appeal both to people new to and familiar with Indian music, as well as appeal to record collectors, 78 fans and so on. I guess I try to hard to please…

Still trying to figure that out…