Her work showed how scholars and poets versed in Sanskrit poetics and rhetoric poured that knowledge into the vernacular and used it to create brilliant compositions. 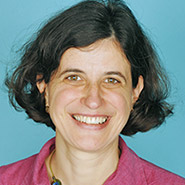 Riti or courtly poetry in Brajbhasha gets a bad press in India, the poetic equivalent of girls running around trees in films. Though still widely practised in the colonial-nationalist period, riti poetry was roundly criticised for its narrow and conventionalised range of themes — top-to-toe descriptions of the female body, categories upon sub-categories of heroines or nayikas and love situations, and hyperbolic praise of the poets’ patrons. Not only was this not “true” poetry, now defined as the expression of the poet’s personal vision and/or an inspiration for the community. Instead, riti poetry was immoral, endlessly repetitive, sycophantic, and useless — hardly surprising that it corrupted patrons, poets, and poet lovers and made them spineless instead of active citizens and staunch defenders of their motherland.

By and large, riti poetry has not recovered from this damning judgment. Only some witty or watered down examples are taught in schools in India, no one wants to study it at college and university, and in literary histories the tone veers between judgemental and apologetic. And yet this was poetry that for three centuries was assiduously studied and remembered, constantly practised and exchanged at courts and more modest gatherings, carefully chiselled in order to fit a particular circumstance or meet a patron’s need; it was poetry that taught the basic grammar of emotions, that was needed to properly appreciate music and painting; it was poetry that filled thousands of manuals, collections, anthologies, notebooks, or was illustrated in beautiful manuscripts and paintings. What were all these people about? 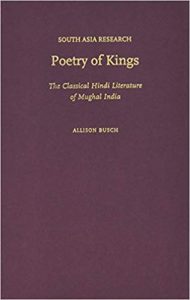 It was the great achievement of Allison Busch – who passed away far too young last week after a seventeen-month struggle with cancer – that this question was posed anew in a fundamental way. In her many important articles and her book Poetry of Kings: The Classical Hindi Literature of Mughal India (2011), which was supposed to be the first of many and now stands achingly alone as testament to her deep scholarship, Allison – for she was my dear friend – single-handedly set about re-evaluating Hindi riti poetry and explaining what it meant and how it mattered to those who practised it.

In her book, she shows how, at a particular point in time, in the first century of Mughal rule, scholars and poets versed in Sanskrit poetics and rhetoric poured that knowledge into the vernacular and used it to create brilliant poetic compositions that initially lent brilliance to local patrons but soon reached the pinnacle of the Mughal imperial court.

The book was the result of years of study, first at the University of British Columbia in Vancouver, Canada, and then at the University of Chicago, where she studied Sanskrit and Hindi with equal intensity and with inspirational teachers, one of which she would later marry. The book grew out of her dissertation on Keshavdas of Orchha, for which she spent several years in India, mostly in Banaras, along the way acquiring an enviable command over different registers of Hindi.

Keshavdas was a crucial figure in the story of the phenomenal success and spread of Brajbhasha poetry and remained Allison’s personal favourite. He first worked at the small Bundela court of Orchha and taught the ruler’s favourite singer, the courtesan Ray Praveen, but then went on to offer a long poem to emperor Jahangir, and his works circulated very widely and were copied and illustrated in sumptuous manuscripts. This is how Brajbhasha became a “cosmopolitan vernacular”, to use the expression coined by Sheldon Pollock, Allison’s husband and part of what was a formidable and mutually sustaining partnership.

In Poetry of Kings, Allison described how courtly Brajbhasha poetics worked in one of its main genres — the poetic manual, which Brajbhasha poets offered to patrons as proof of their mastery. She also showed how the taste for Brajbhasha poetry quickly spread much beyond the region of Braj, from Kutch in the West to Bengal in the East, from the Punjab Hills to the Deccan.

Poetry of Kings and her co-edited book (with Thomas de Bruijn) Culture and Circulation: Literature in Motion in Early Modern India (2014) show Brajbhasha poets to be very much on the move, entrepreneurs attaching themselves to ambitious governors and small and large rulers as necessary part of their entourage, able to create a suitably sophisticated environment but also to fulfill a range of practical functions as envoys or tutors. For, as Allison showed in her articles on Brajbhasha poetry on the battlefield and on Brajbhasha historical works that were supposed to become other books, poetry fulfilled many needs and permeated the courtly and mercantile culture of early modern North India, where the inability to compose, recite, and appreciate poetry and to produce the right verse at the right time would have marked you and me as unspeakably dull. To know poetry was necessary to be recognised as fully human, and knowledge of the poetic and emotional grammar of Brajbhasha was indispensable for what Katherine Schofield has called the “Mughal rasika”.

In one of her most brilliant pieces of writing, aptly/perfectly titled “Hidden in Plain View: Brajbhasha poetry at the Mughal court” (2010), Allison proved with not an ounce of doubt that it was not only Hindu rajas and rasikas at the margins of the Mughal empire who practised and treasured Brajbhasha poetry, it was also Muslim Mughal patrons and connoisseurs at the very core of the empire who were instrumental in spreading the taste for riti poetry.

While Persian sources and chronicles privilege Persian poetry, through brilliant detective work Allison showed that even they contain significant traces of the presence and activity of Brajbhasha poets, while there are any number of Brajbhasha works dedicated to Mughal royal and aristocratic patrons. What in Saryu Prasad Agrawal’s Akbari Darbar ke Hindi kavi (1950) had seemed like hyperbole, Allison showed to be only the tip of an iceberg. What we call Mughal culture, from the imperial court to subordinate courts, to the entourages of provincial officials and the culture of Mughal towns, was not just Persian culture. It was a multilingual culture in which Persian poetry coexisted with Brajbhasha, with Sanskrit (as Audrey Trutschke’s work has shown), with Hindustani music, and so on. How Brajbhasha poets carefully, and sometimes playfully, acknowledged this environment through their choice of words is beautifully explained in her essay “Riti and register” in the edited book Before the Divide (2009). This is a shift in the understanding of early modern culture, Mughal but also Bhakti, that we are only beginning to appreciate and work through at the level of scholarship in the various disciplines, from history to art history to religion. It is also a shift that requires collaborative research across languages and disciplines. Allison was once again a trailblazer, as the volume Culture and Circulation shows.

One of the most exciting projects she was working on was a book exploring the meanings and valence of the Nayika or heroine across poetry and painting, a book she was co-writing with her dear friend and art historian Molly Aitken. A few years ago, Allison, Molly, and music historian Katherine Schofield together discussed what it means to consider the aesthetics underpinning Brajbhasha poetry, Rajput painting and Hindustani as “intermedial”. In other words, what is the effect of listening to verses on the monsoon being sung while gazing at a painting of the rain — how each medium contributes and emphasises something particular while enhancing the experience of the others, producing a saturation of the senses that transports you to a different realm of experience and state of being. Listening to them talk felt like eavesdropping on an early modern gathering and learning to look at art, read poetry, and listen to music with new, fuller eyes and ears. It was breathtaking. 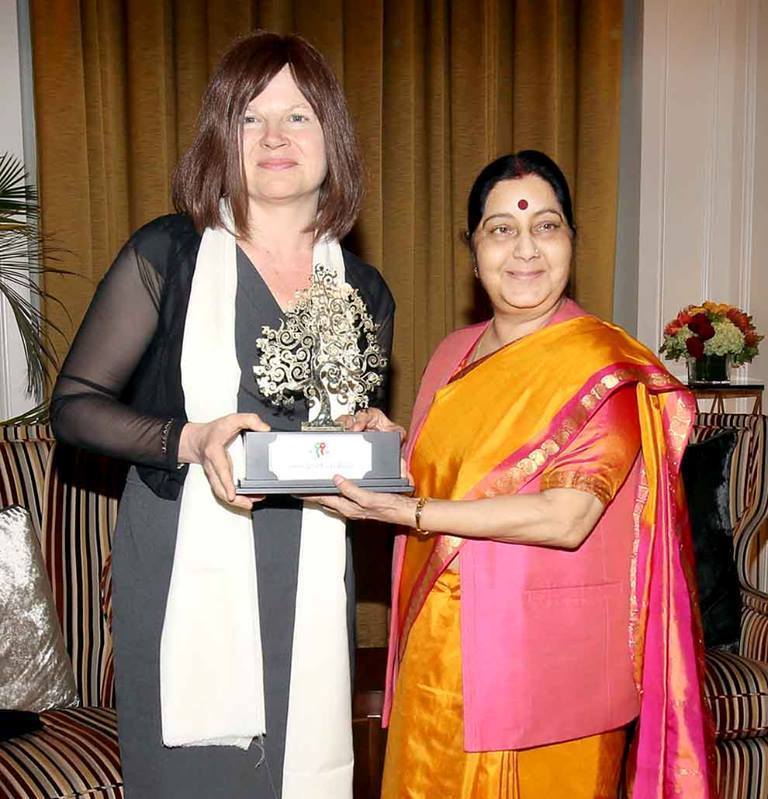 But Allison was not just a brilliant scholar and eloquent speaker, she was also a dedicated and generous teacher with a talent for creating and supporting networks of young and future scholars while honouring the older generations. Apart from her teaching, first at the University of North Carolina at Chapel Hill and then for several years at Columbia University in New York, in the last ten years she became one of the souls (the other is Imre Bangha of Oxford) of what is informally called Braj camp. This is an annual gathering where students and scholars of Brajbhasha meet for a fortnight, typically somewhere beautiful and cheap in Eastern Europe, to read Brajbhasha together, sharing the texts they are working on, discovering new ones, and in the process creating a wonderful esprit de corps for individuals who are otherwise alone in their interest in Brajbhasha within their institution (sometimes their country)! The group has grown over the years and crossed double digits. It draws participants from all over Europe, the US, India, China and Japan. Given the disparity of interests and levels of expertise and the intensity of the experience (not to mention academic egos), patience can sometimes wear a little thin, but Allison was always a soothing and firm presence, encouraging and humouring everyone along. 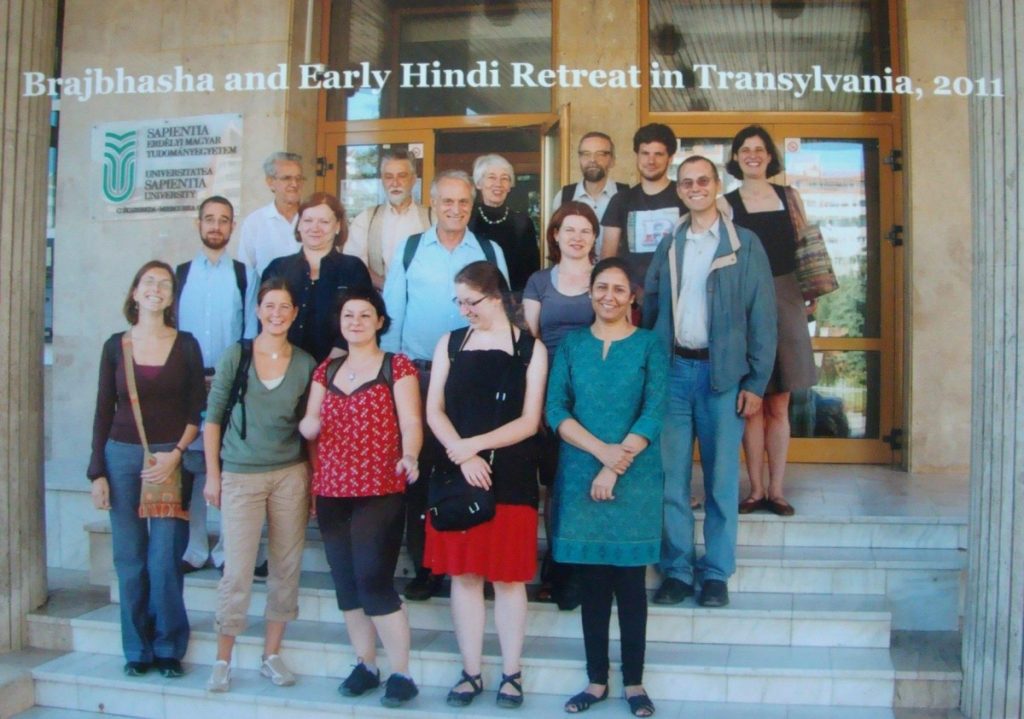 Allison had a real talent for friendship and for turning working relationships into deep personal ones, full of love and empathy. I remember many occasions in which we sneaked out of workshops, libraries, or Brajbhasha reading sessions, in order to have long and satisfying updates and exchanges about our personal lives around a pot of tea or a glass of wine, preferably in some park or somewhere outdoors.

I particularly remember two occasions, both connected with Braj camp. Once in the small Romanian town of Miercurea Ciuc we sat out for dinner at a modest Italian restaurant that however seemed to us pure luxury after the fare of the hostel where we were staying (sorry, Imre). Another, even more magical, evening we spent in the pavilion inside Łazienki park in Warsaw, when the evening coolness enveloped us as the hot summer day finally turned into night. We sat in the dark and as usual talked about life, teaching, difficult colleagues, families, and the future ahead of us, sharing our burdens as female academics trying to juggle too many responsibilities while remaining human and kind. We did this every time we met, and I thought then that we would continue to do so until we both grew old and cranky and wrinkled. That she will no longer be with us is heartbreaking. But now she will always remain beautiful and glowing and kind.