The farcical enactment of ‘the return of Ram Rajya’ signals trying times ahead. Seeing Ayodhya’s plight many speak of the curse Sita put on it for abandoning her at a difficult juncture and choosing to belong solely to Rama. 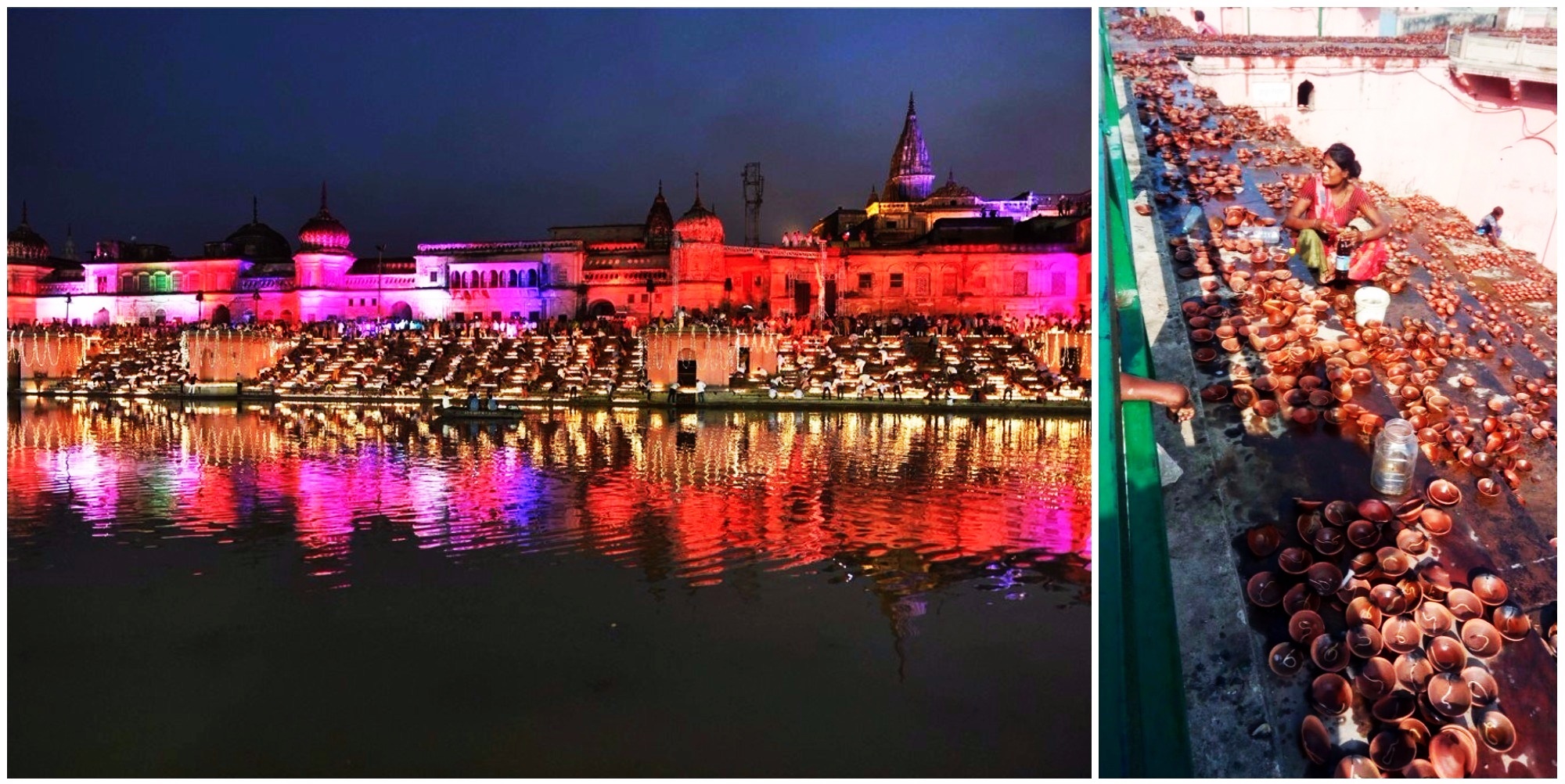 On October 18, 2017, the chief minister of Uttar Pradesh, Yogi Adityanath, presided over a lavish spectacle in Ayodhya, billed as ‘the return of treta yuga’ (the mythological age in which the events associated with the Ramayana are said to have taken place). The highlights included a shobha yatra (procession) with tableaux depicting the age of the Ramayana; the arrival in Ayodhya, by helicopter, of the victorious ‘Rama’ with ‘Sita, Lakshmana’; the ‘coronation of Lord Rama’ by the chief minister; and the finale of setting a new world record for lighting diyas, or earthen lamps.

Who knows whether the exercise was a travesty of the meaning attached to diyas or Ayodhya, or was a mockery of both. The Guinness world record for simultaneously lighting the maximum number of diyas was hitherto held by the convicted rapist Gurmeet Ram Rahim of Dera Sachcha Sauda in Sirsa, Haryana. Now, with Ayodhya providing a pretext for it, the record is in the name of the Uttar Pradesh state government – the same power-drunk government which has gone to the extent of stigmatising a monumental symbol of love such as the Taj Mahal by making it a target of communal hatred.

What are others to make of this exercise when Ayodhya itself is unable to do so? It watched dejectedly as a record was thrust upon it for a few hours on October 18 with an unseemly show of officious pomp, and now that the pageantry has ended, once again it has become forlorn. So much so that seeing Ayodhya in this state, people are reminded of the curse that crossed Sita’s lips when in her most difficult time – the most trying period in a woman’s life – she was forsaken by an Ayodhya content to belong solely to Rama. Considering the travails Sita had to endure, what could she do other than put a curse on Ayodhya, say those who recall these myths.

Today Ayodhya is as alone and abandoned as Sita was. And, like her, facing trying times. Shaken, not knowing whom to blame for its plight, and how. There was a rush of news channels to catch last Wednesday’s pomp; today there is not a single one in sight to enquire about Ayodhya’s sorrow.

News channels will be news channels, but even newspapers no longer seem interested in its lament when those in power have stated that this is just the first stage of making Ayodhya forlorn. Who knows what it will be fated to endure and see after the completion of three stages. There’s a proverb in these parts – wherever the progeny sets foot, there is nothing but ruin.

A much respected poet, Anil Kumar Singh, who teaches at Ayodhya’s Saket PG College from where the ‘grand’ shobha yatra commenced last Wednesday, says that Ayodhya’s woes are only going to deepen in the coming days. For it is in the name of Ayodhya that a farce, namely the return of treta yuga, is being enacted. Moreover, in the pursuit of a fervid ambition to raise the pennant of self-glory higher and higher, there is a plan to accomplish many more ‘record-breaking’ feats.

What is certain is that this plan cannot be accomplished without creating mayhem and turning things upside down.

Some of those inversions are clearly evident even now. See the way in which the ‘small’ Deepawali became ‘big’ in Ayodhya this year, with an accursed ‘big’ Deepawali beating its head over what transpired. The 1,87,000 diyas that were lit up on Ayodhya’s ghats on the day of the small Deepawali, gave the poor and the deprived in surrounding areas so much cause for heartburn that they could not muster up the courage to laud the sight. One can also put it another way – a dispensation generally fearful of the poor and the deprived had made such heavy security arrangements that they were reduced to watching the rows of diyas and the accompanying ovation on television screens. However, as morning broke, a feeling of having been cheated drew them to the ghats.

To watch the multitude scrabbling to collect the oil left over in the extinguished diyas in their bottles, one had to be stone-hearted – these people weren’t parasites in the mould of the legendary Mirza of Awadh who sponged off the king to play Holi.

As for the ruling dispensation which organised the lighting of the diyas on the ghats, rendering the people helpless in the process, it spared no thought for how they would celebrate Deepawali in their homes. What an irony that at a time when the people were being shown the dream – more like being led up the garden path – of Ram Rajya, the only dream within their reach was of lighting their thresholds with stale oil! 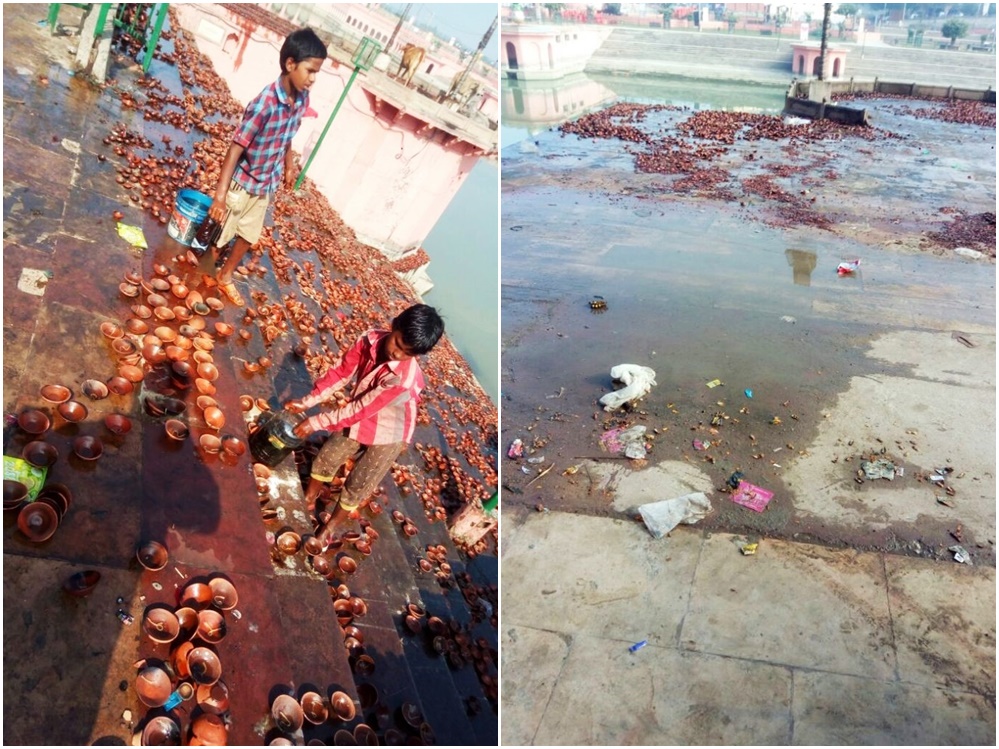 Children scrambling to collect the oil left over from the Diwali event organised by the UP government (left), garbage strewn on the ghats following the event. Credit: Krishna Pratap Singh

Seeing the kind of narrative that is being crafted now, some ‘bhakt’ may well come forward to claim that the government had ordered a large amount of oil to be put in the diyas so that the poor could collect what was left over the following morning and use it to light up their homes.

One can’t put it past the bhakts to also claim that there couldn’t have been a better way of reaching oil to poor households.

However, the one question to which the bhakts have no answer is this: for all the oil spilled in the ghats, which has ordained slipperiness and dirt in the destinies of the devout, who is responsible? Is it not those luminaries who have scripted and made use of cultural distortions to benefit politically – who in rolling out their ‘Dev Deepawali’, did not refrain from dirtying the spots where their own government had displayed silvery slogans of ‘swachchata’!

What accountability can one expect in this matter from those luminaries when some within their own flock are muttering that they who have made a business of using Lord Rama’s name to put a shine on their politics, have not even been able to keep his maryada (dignity) intact. When the chief minister reached the helipad in Ayodhya to greet the characters of Rama, Sita and Lakshmana as they embarked from their ‘pushpak vimana’ (helicopter), his attempt to garland ‘Rama’ was made difficult by his lack of inches! For his convenience the sycophants made ‘Rama’ lower his head, forgetting that it went against the dignity of the personality of Rama. In that instant the Ram Lila was reduced to a farce.

In the midst of a shower of flowers from a helicopter above and before a waiting audience of hungry school children, college students, beneficiaries of governmental schemes, and sadhus, the chief minister made many a grand pronouncement, including that of a Rs 133 crore package for various development schemes in Ayodhya. He said nobody could now halt the process of respecting Ayodhya’s sentiments and making its dreams come true, that its transformation into an international tourism hub was certain.

In the past too, Ayodhya has heard many an insincere pronouncement. Hence, untouched by enthusiasm, it kept thinking about the bus station that it has been longing for. Even the train station that has been bestowed upon it is such that after alighting from a train if a tourist needs to urgently use the toilet, there’s a risk he or she could be looking for ever. Let alone a ‘free’ toilet, there is not even a ‘pay and use’ one in sight. If the passenger happens to be female, she should be prepared for such travails at every step.

Here it’s pointless to ask whose money and how much was spent on this sarkari Deepawali. When the government of ‘saints’ states that the ‘saints’ have spent all the money, then keeping in mind the relationship between the two, there is no harm in accepting this claim. It is a telling claim: you get to know that the court of saints, ostensibly detached from worldly realities, now lacks for nothing.

But the reason for Ayodhya’s sorrow is that irrespective of the amount of money spent, it still did not benefit the local potters who make diyas or the maalis who make garlands. The reason was simple: from arrangement to supply, it was corporate event management all the way.

There is one more complaint regarding this matter, namely that the state ministry of tourism and culture got much of its preparations done through work orders, bypassing the tendering process, so that if needed there would be ample scope for denials and cover-up later.

In the midst of this commotion, the chaos and lull that stretched across the markets of Ayodhya and its twin city, Faizabad, ended up frustrating even the traders for whom Deepawali begins with dhanteras, which provides them an opportunity for additional earnings.

The last straw was the murder of a young trader in Hridaysthal Chowk on the evening of dhanteras, exactly a day before the sarkari Deepawali when an inept administration – it can’t even get back Sarayu’s water that has flowed away, say locals – was bringing back the treta yuga in Ayodhya.

In the midst of this blood-spilling, how could Ayodhya possibly celebrate and be happy?

Krishna Pratap Singh is a senior journalist based out of Faizabad, Uttar Pradesh.

Translated from Hindi by Chitra Padmanabhan. Read the original here.