A filmmaker revisits his images from a 2018 shoot at Bulandshahr, the site of a Hindu nationalist conspiracy that led to the suspicious death of a police officer, to understand how the Hindutva ‘fringe’ becomes mainstream. 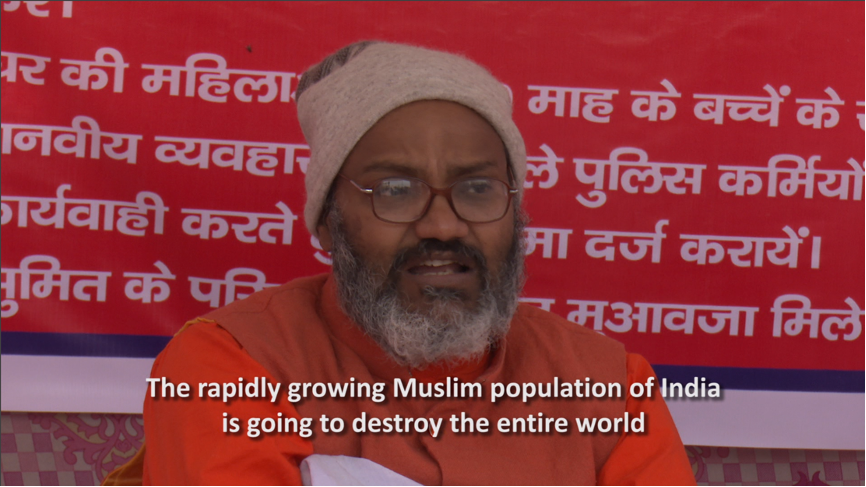 Reading the reportage in The Wire about the horrific provocation that led to the February 2020 rioting in Delhi and the incendiary remarks against Muslims and the Prophet Muhammad by the self-styled sant Yati Narsinghanand Saraswati, I decided to revisit the images of my meeting with him in Bulandshahr, Uttar Pradesh, in December 2018.

Our film team had travelled to Bulandshahr to investigate the violence that had taken place there that December, which had resulted in the murder of a highly respected police office, Subodh Kumar Singh, and the death of Sumit Kumar, a young man who appeared to have been in the wrong place at the wrong time.

The events of December 2018 in Bulandshahr that I describe here continue to deserve an urgent and thorough investigation and are a reminder of the murky and malevolent techniques that Hindutva employs to reproduce itself.

The case of the cow carcasses

On December 3, 2018, in Mahav village of Bulandshahr district in western Uttar Pradesh, several carcasses of cows appeared mysteriously on farmlands belonging to one Rajkumar Chowdhury, the former sarpanch (head) of the village. These carcasses were ‘discovered’ in this far-off location by a notorious Bajrang Dal activist, Yogesh Raj.

In a subsequent first information report (FIR), Raj claimed that he and two of his friends came upon a group of Muslim men slaughtering cows in a distant field. The Muslim men escaped upon seeing Raj and his accomplices. The FIR filed by Raj named seven Muslims from the village as responsible for the cow slaughter.

CarcassScenes.mp4 from Lalit Vachani on Vimeo.

But there are serious doubts and question marks over the veracity of the FIR filed by Yogesh Raj. First, why were Yogesh Raj and his companions walking in fields distant from their homes at 9 o’clock in the morning? How did they ‘happen’ upon miscreants slaughtering cows at this far-off location? If these young men from Hindutva groups had actually seen the miscreants slaughtering cows, how is it that the carcasses discovered at the crime scene were over 48 hours old at the time of discovery?

Why were these cow carcasses then put on display when the police arrived?

Most importantly, how is it that Yogesh Raj’s FIR mentions the names of Muslims from the village who were either minors or children, or were out of town attending a religious gathering, or quite simply did not even live in the region any longer?

In other words, how and why was a completely fabricated FIR lodged with the local police?

Timeline of a conspiracy

Most of the Muslim men in the villages of Bulandshahr district had not been at home as they had gone to the neighbouring district for the religious Ijtema procession.

Local activists told me that there was a deep design to the time the cow carcasses were discovered: they were ‘found’ in a distant field at precisely the time when there were no Muslim men in the village. This meant – very conveniently for purposes of Hindutva mobilisation – that these Muslim men were not present to defend themselves or their families when a large and violent mob of Hindus appeared in the village.

My sources in Naya Bans village in Bulandshahr also told me that Yogesh Raj had held a large meeting the evening before the carcasses were ‘discovered’, suggesting that the ‘spontaneous’ and armed mob that would assemble outside the Chingravathi police station the next morning, when Yogesh Raj blamed the local Muslim community for slaughtering the cows, had been organised.

After the carcasses were deftly gathered and loaded on tractor-trollies, this armed mob of Hindu vigilantes gathered near the police station demanding justice.  Inspector Subodh Kumar Singh challenged the mob and asked them to step back. He was attacked and chased by the mob and eventually shot dead under murky circumstances, as was Sumit, a young man who some claimed was a member of the Bharatiya Janata Party (BJP) while others described him as an innocent bystander. Later, reports would suggest that both of them had been shot dead by bullets from the inspector’s gun, with the suggestion that someone else had pulled the trigger.

The untimely death of Inspector Subodh Singh was particularly suspicious as he had been the chief investigating officer and main witness in the Mohammed Akhlaq murder case in Dadri and had arrested 10 of the 18 accused in the Akhlaq lynching. BJP politicians in the Bulandshahr area had been unhappy with him and while in the thick of the investigation, he had been transferred to Varanasi. Local activists and lawyers told me that there was a strong motive to silence Inspector Subodh Singh as he was a key witness in the Dadri case and due to give testimony in court. His family also confirmed that he had been receiving death threats. They were convinced that his death was not accidental and was part of a larger conspiracy.

The local Muslims we spoke to described Inspector Subodh Singh as a fair and fearless police officer. They believed that the armed Hindutva mob that had gathered at the police station had intended to attack the Muslim Ijtema procession that was returning to Bulandshahr. It was only the swift last minute re-routing of the procession from Aurangabad to Jahangirabad that had prevented large-scale communal violence. For these local Muslims, Inspector Subodh Kumar Singh was a saviour who died a hero’s death while protecting their community.

In a nutshell, the events of December 2018 had created a highly toxic and unsettling situation which had brought the local police at loggerheads with local Hindutva forces and the BJP administration in the state. Having lost their beloved comrade officer, the enraged police lashed out at the families of those who were close to the crime scene which had led to the inspector’s murder. Hindu households of mob members were ransacked, goods destroyed and the inhabitants and relatives (both men and women) beaten with sticks and batons. But as a parallel activity, Muslims were being rounded up and arrested in response to the claims made by Yogesh Raj in his fabricated FIR.

It was in this context that I met and filmed Yati Narsinghanand Saraswati.

Early morning on December 18, 2018, our documentary crew was about to head out to the villages near Chingravathi police station when we came across a makeshift shelter with two middle-aged men under a quilt, busy checking their mobile phones. Banners informed us that this was the scene of a hunger strike initiated by Yati Narsinghanand Saraswati – the national convener of the Akhil Bharatiya Sant Parishad (All India Council of Saints) – to protest the police atrocity on local Hindus. Other than the fortuitous presence of the local chaiwallah (tea vendor) who drew a few customers, there was no one in attendance. At first glance, there seemed to be something desultory and unimpressive about this public protest.

But I observed that Saraswati’s anshan (hunger strike) did have an overt aim. It attempted to gloss over the role of Yogesh Raj and the Bajrang Dal in fomenting the unrest and the violence at the police station. It was designed to deflect attention away from the murder of Inspector Subodh Singh by Hindutva forces and to focus on the death of Sumit Kumar and the actions of the local police against Hindus.

Swami_NSS.mp4 from Lalit Vachani on Vimeo.

Saraswati began to get irritated with me when I told him that our research and our filming showed that local Muslims were being victimised. He proceeded to manufacture fanciful, exaggerated figures about Muslim overpopulation and Hindu marginalisation in India. Describing Indian Muslims as ‘demons’, Saraswati warned those of us ‘who live in Germany, Europe and the USA’ that the Indian Muslim problem would ‘destroy’ the entire world. Of course, he could not substantiate how this would happen.

But the crowning moment of the interview occurred towards the end when Narsinghanand Saraswati suggested that Yogi Adityanath, chief minister of Uttar Pradesh, and the BJP, the state’s ruling party, were responsible for Muslim appeasement because they had ‘created more schemes for Muslims in one year than the Congress party had done in over 70 years’!

The interview with Saraswati did not end amicably. Peeved and disgruntled, he accused our team of being ‘biased’ when we talked about the victimisation of Muslims and suggested that he needed to listen to the ‘other’ side and incorporate Muslim views in his thinking.

Swami_NSS_End.mp4 from Lalit Vachani on Vimeo.

Life force of the ecosystem

I dismissed Yati Narsinghanand Saraswati as a crackpot, a desperate attention-seeker at the extreme fringes of a Hindutva movement that could not possibly find him useful or wish to accommodate him. I reasoned that any Hindutva figurehead who describes BJP rule and Yogi raj in Uttar Pradesh as ‘appeasement politics towards Muslims’ could never be taken seriously. But in making this assessment, I made a crucial mistake – one that many watchers and political observers of Hindutva routinely make.

We tend to look at Hindutva as a static and self-correcting entity that will moderate itself in the face of political responsibility and the need for good governance. We fail to understand that the Hindutva ecosystem is always in a state of constant churning, a churning that constantly pushes the extremities and the periphery to the centre. In the process, this praxis of Hindutva with its constellation of internal enemies and external threats is rejuvenated and the ‘sakriya karyakarta’ (active worker) of the Sangh Parivar is first empowered and later rewarded for hate speech when the logic of the rule of law would suggest that he should be arrested and incarcerated, or at the very least, curbed and controlled by the party high command.

A closer look at my interview with Saraswati will confirm this. The Yati Narsinghanand Saraswati whom I interviewed in December 2018 was a relatively unknown, muted hate-monger in search of a patron, a platform, a pulpit and an audience. But the Yati Narsinghanand Saraswati who resurfaced in February 2020 had been provided with all of these. He had been nurtured by the Hindutva ecosystem and given a space to legitimise and normalise communal hate speech with his strident calls for violence against Muslims.

And as we see, the list of sakriya karyakartas who have been rewarded and continue to be the life-force of the Hindutva ecosystem is long and ever-growing. To mention just a few, it includes the late Kalyan Singh, L.K. Advani, Narendra Modi, Pragya Singh Thakur, Yogi Adityanath, Parvesh Verma, Kapil Mishra and now Suraj Pal Amu, Yati Narsinghanand Saraswati and Yogesh Raj.

(In May 2021, the once absconding and prime accused in the Bulandshahr violence case, Yogesh Raj, was rehabilitated and became a legitimate and integral part of the Hindutva ecosystem by winning the panchayat elections in Bulandshahr on a BJP ticket. In what is perhaps a sign of the times to come, Raj celebrated his election victory inimitably – by physically attacking the villagers who had dared to not vote for him.)

Lalit Vachani makes documentary films and teaches at the Centre for Modern Indian Studies (CeMIS) at the University of Göttingen, Germany.