Will Bihar's Communal Pot Be Kept on The Boil Till the Next Elections?

Communal tension grew in the state after 2013, and now amidst speculations of simultaneous Lok Sabha and Bihar assembly polls, communal clashes are rising in an unprecedented manner. 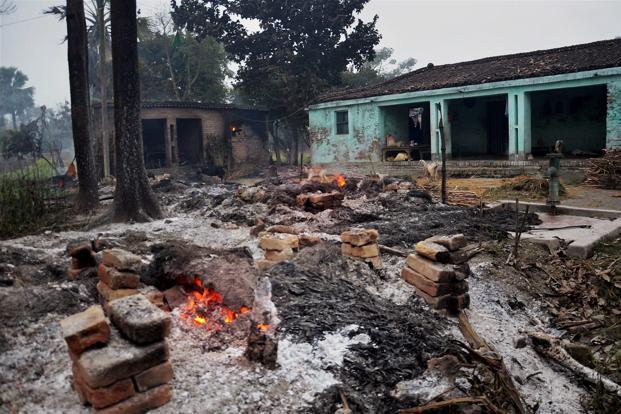 In the past three weeks, across Bihar, there have been communal clashes and violence, just short of claiming human lives. These were in Gaya, Arrah, Dhaka (East Champaran), Gaighat and Marwan in Muzaffarpur and Mahua in Vaishali. The Bihar administration has not been able to check the rapid proliferation and ever-swelling ranks of the saffron outfits. It, however, appears that last-moment police intervention to control and prevent, if not in pre-empting the violence, has largely been successful in most cases.

In a village, Ababakarpur (Mahua, Vaishali), there was acute tension last week when the Hindu Jagran Manch insisted on taking out a Mahabiri Jhanda procession through Muslim-populated villages. They were carrying traditional weapons and firearms, shouting  anti-Muslim and provocative slogans. Earlier, on January 23, in two different villages of Muzaffarpur – Gaighat, and Marwan (in Kanti assembly) – there were clashes when a Hindu procession to immerse the idol of Saraswati, the goddess of learning, insisted on passing through Muslim-populated areas. Such processions have been held earlier but never were anti-Muslim slogans raised, nor did the participants carry weapons. This year they did. The processions of Mahabiri Jhanda, Ramnavami, Durga and Muharram have been contentious since the colonial days, often engendering communal violence. Clashes on the occasion of Saraswati Puja, however, are a completely new development. In fact, earlier, this ritual often saw participation of students from both Hindu and Muslim communities.

Interestingly, there are certain areas that seem to be more prone to such tension:

Some of these Muslims also harbour aspirations of getting into legislatures. These neo-rich, upwardly mobile segments are often demonstrative about their new-found status. Some of them add to the fanfare of religious processions, such as Muhammadai Julus (Prophet’s birthday) with green flags (often mistaken by Hindus to be Pakistan’s flag), and have constructed big mosques with tall minars and domes. In such localities, whipping up anti-Muslim hatred is easier for saffron outfits. Some such [Muslim] aspirants also play a role in communal polarisation in order to consolidate the Muslim electorate.

Hoodlums from both communities, acting as brokers in thanas and Community Development Blocks – many of whom are panchayat representatives – also used for communal polarisation. This ‘politics from below’, of the new aspirational groups, is increasingly taking recourse to competitive communal mobilisation through religious processions in the public sphere.

Seats with 40% and more Muslim and Yadav electorate are expected to be rock solid support bases for the Rashtriya Janata Dal (RJD). For instance, Mahua has a total electorate of around 2.44 lakh. Local observers, through village-level booth analysis, have estimated that around one lakh people are Yadavs (55,000) and Muslims (45,000). So is Gaighat, (where a Rajput MLA of BJP was defeated by a Yadav) in eastern Muzaffarpur, [and Kanti in western Muzaffarpur, which elected Muslim representatives twice, and despite being an unreserved seat, the incumbent MLA is a Dalit, and elected as an Independent]. RJD leader Lalu Prasad Yadav’s elder son, Tej Pratap Yadav, is the incumbent MLA from Mahua. In fact, around a 100 seats (out of a total of 243), mostly in north and east Bihar, have a 30-40% Yadav plus Muslim electorate.

Also read: From Friend to Foe to Friend Again, the Modi-Nitish Bond Is a Suspension of Political Morality

State chief minister Nitish Kumar, in alliance with the Bharatiya Janata Party (BJP), had succeeded in replacing RJD in November 2005 by social engineering. He  won over the non-Yadav OBCs (almost 20% of the Bihar electorate), a large number of Dalits, and Pasmanda Muslims, who had become wary of the Yadav hegemony. Whereas in the November 2015 elections, Nitish Kumar’s alliance with RJD was seen by the non-Yadavs as an assurance to safeguard their interests.

Now, with Nitish Kumar having re-aligned with the BJP in 2017, upper caste hegemony,  particularly of the Rajputs, is seen to be staging a comeback. With Lalu Yadav being sent to jail in the fodder scam case in December, and Nitish Kumar appearing to merely be a junior ally of the BJP rather than a dominant one (as he was during 2005-13), a segment of OBCs and Dalits appear to have  become sympathetic toward the RJD. They also apprehend that Lalu Yadav’s sons and daughters might be jailed in similar cases, just before the next elections, thereby making the opposition leaderless. Speculations are rife that the BJP wishes to hold the Bihar assembly elections along with the next Lok Sabha elections. 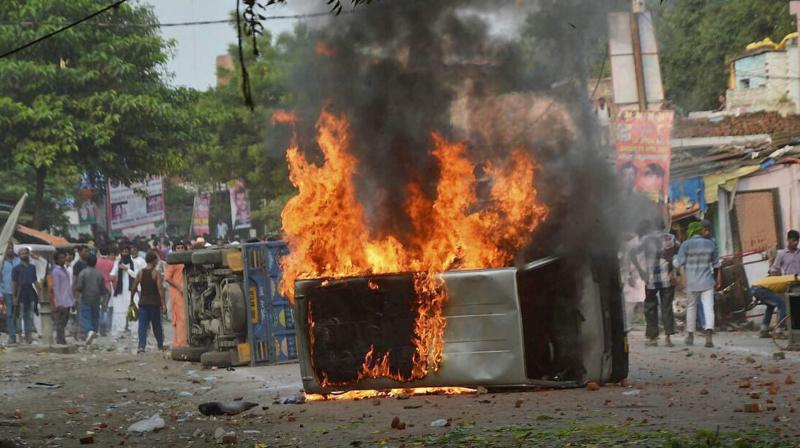 In this scenario, communal polarisation is possibly the only way for the BJP to consolidate non-Yadav Hindus behind it. That could be the reason why saffron outfits have suddenly become more visible and assertive, fomenting trouble through religious processions with provocative slogans and carrying weapons.

Bihar supplies a huge quantum of labour force to urban spaces across India. Ever since demonetisation in November 2016, most of those working in the unorganised sector have lost their jobs and have come back to their villages. This distress is further accentuated as construction work in Bihar has halted, choking wage-earning avenues. There is an administrative prohibition against sand mining. In the pre-Lalu Yadav era, sand mining was dominated by the Rajputs. In the Lalu-Rabri era, Rajputs were replaced by the Yadavs, which continued even during the Nitish-BJP era. Some of the “sand-mafia”, as they are often referred to, are supposed to be money-bags for the RJD in elections. It is understood that the ban on sand-mining intends to choke the financial resources of the RJD, so that the opposition is rendered not only leaderless but is also financially crippled. Surprisingly, the RJD is not able to articulate this particular issue and mobilise its support base – construction labourers – to expose the Nitish Kumar regime.

Be that as it may, growing unemployment and economic distress are providing an outlet, a sense of religious purpose, to the beleaguered youth who are joining saffron outfits in large numbers. Through mass contact programmes like ‘Shiv Charcha’ (particularly among OBC and Dalit women), organisations like Hindu Yuva Vahini (HYV) – headquartered in Gorakhpur, adjacent to Saran in Bihar, headed by the Uttar Pradesh chief minister Adityanath, a Rajput, Bajrang Dal etc., are proliferating in parts of Bihar, such as Saran, Champaran, extending up to Tirhut, Mithila, and Bhojpur. In Saran, HYV offices are coming up mainly in Rajput-dominated villages.

The communal riots in Muzaffarpur–Vaishali–Saran, during 2015-16, saw the participation of Bajrang Dal youths masking their faces with saffron cloth, carrying out loot, arson, plunder, setting houses and shops on fire.

Also read: Kasganj: The Anatomy of a Communal Riot

Reportedly, some youth get some honorarium for joining such organisations. Activities such as weekly morning drills of Rashtriya Swayamsevak Sangh (RSS) shakhas have become more visible even in areas which did not have any history of communal violence.  For instance, in Mahua, Vinod Rai, a Yadav, of Chak Mujahid village (who contested the last assembly election against Lalu Yadav’s elder son, Tej Pratap), and his aide Pramod Jha (member, Zila Parishad and husband of an elected panchayat chief) are said to be very active in recruiting youths to the fold of the Hindu Jagran Manch. Rai was supposed to be in touch with Pravin Togadia, who had organised Gau Pushti Karan Sangathans in Vaishali in 2014-15. Local sources say that Rai is backed by some affluent Rajputs who funded the Mahabiri Jhanda procession from a nearby village, Sehaan.

It should be noted that Chak Mujahid and AbaBakrpur villages had licenses to slaughter oxen and buffaloes to sell meat. These licenses have not been renewed in a long time.

In June 2013, Nitish Kumar broke his alliance with the BJP, and July 2013 onwards, communalisation started accelerating. Hundreds of communal clashes took place, carcasses were found in mosques and graveyards, idols defaced, bloodstains were found in temples and religious procession routes. By August 2015, these incidents had touched a peak, as the Bihar assembly election was approaching.

The market towns of Vaishali Mahua, Lalganj, and Goraul have some Muslim traders/shopkeepers as well. In Vaishali (which has a high concentration of Dalits) and Samastipur villages, a good proportion of Muslim peasants with small landholdings have gained prosperity through cash crops like tobacco, sugarcane, garlic, chilli and vegetables. So much so that one of them is a famous tobacco maker of Kolkata (Signal brand zarda of Ramzani Miyan Ansari.) This economic mobility has given rise to competition, jealousy and rivalry.

In Mahua, numerically the third single largest caste-group is said to be the Kushwahas (also called Koeris), and their leader Upendra Kushwaha, from Bihar, is a minister in the Narendra Modi cabinet. He was recently in touch with RJD leaders, which has became a concern for the BJP.

With these developments amidst speculations of simultaneous Lok Sabha and Bihar assembly polls, communal clashes are rising in an unprecedented manner. Local political observers feel that the BJP might want to marginalise Nitish Kumar to be become a dominant political force in the upcoming elections. Through communal polarisation, the BJP intends to win over segments of Dalits and lower OBCs. RSS chief Mohan Bhagwat camping in Muzaffarpur between February 6 to 15, 2018, is being seen as an exercise towards that. And this is a view held not just by the leader of the opposition, Tejaswi Yadav (in his recent tweet), but also by many other informed observers and workers from various political parties. Tejaswi Yadav, however, is yet to be seen propping up non-Yadav OBCs and Dalits leaders. Tej Pratap, despite having launched his Dharmnirpeksh Sevak Sangh (DSS) with fanfare in 2017,  remained holed up in Patna while his home turf, Mahua, was seized with communal fire.