This is the first time a member of the BJP’s National Executive has expressed scepticism of "love jihad." 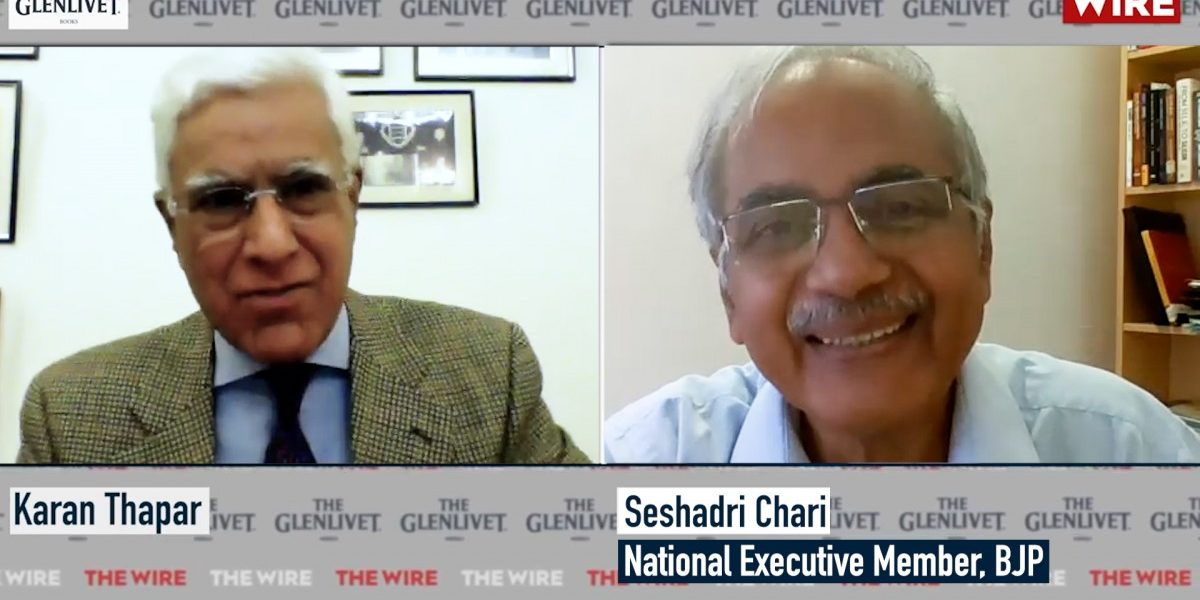 In a frequently quarrelsome and at times even aggressive interview on the Bharatiya Janata Party’s claim that young Muslim men are indulging in “love jihad” to marry Hindu girls so as to convert them to Islam and also on the connected Uttar Pradesh ordinance on religious conversion, a member of the BJP’s National Executive has admitted that love jihad is “a complex issue” and there is “a total lack of academic policy on this issue”.

He also said this is “a question of credibility”. Seshadri Chari says though “people understand the term and tend to believe it”, the phrase itself is like ‘policy-paralysis’ and ‘pseudo-secular’ i.e. terms that have become accepted and understood but for which proof is not always readily available.

More importantly, speaking specifically of “love jihad”, he adds “we need to clinically examine to see if it’s true”. This is the first time a member of the BJP’s National Executive has expressed scepticism of “love jihad.”

In a 45-minute interview to Karan Thapar for The Wire, Chari was questioned about the statement made in the Lok Sabha by the Minister of State for Home Affairs, G. Kishan Reddy, on February 5, when he said: “No such case of ‘love jihad’ has been reported by any of the central agencies”.

In response, Chari said: “When a minister says something we need to find out the framework of inquiry that was conducted and which led to this conclusion”. In fact, he asked, “Was there a framework for the investigation?” In other words, Chari appeared to be suggesting that how the issue was framed and how the concerned agencies investigated it would have determined what the minister said. Therefore, the minister’s statement that no case of love jihad has been reported does not mean that “love jihad” is not happening, he appeared to indicate.

Chari pointed out that the term was first used by the former CPI(M) chief minister Achuthanandan. He also said that the Kerala Bishops Conference had officially claimed that it knows of 4,000 cases of “love jihad”. He added: “So you can’t say it’s wrong to say young Muslim men are marrying Hindu women”.

Speaking about a separate statement made by UP minister Siddharth Nath Singh that “more than 100 cases of forcible conversions” have been found, Chari said “he should substantiate his claims”. When it was pointed out that Singh has not done so, Chari said “he will have to do it”.

Chari said the special investigation conducted for the Uttar Pradesh government by Mohit Agarwal, Inspector General, Kanpur Range, which ruled out “any conspiracy angle” in the alleged love jihad cases it investigated and “also found no evidence that the muslim youths involved got any funding from abroad”, was limited to just 14 cases. He said this does not dispose of the 100 cases Siddharth Nath Singh spoke of.

Chari is the first senior member of the BJP’s National Executive to agree to a 45-minute interview on “love jihad”. Before The Wire approached him, we spoke to several other members of the party all of whom, for one reason or another, declined to be interviewed on this subject.

Asked why a young Muslim boy, with his whole life ahead of him, would marry an unknown Hindu girl just to convert her to Islam and then find that he’s stuck with her for the rest of his life, Chari gave The Wire the following answer: “I’m not a trained psychologist to go into this”. He suggested there could be a process of “continuous indoctrination” that motivates some Muslim boys to behave in this way. He also suggested there could be “a financial angle to this”.

Questioned about the recently passed UP ordinance which requires anyone changing their religion to give the government two months advance notice, subject themselves to a police inquiry whilst the government invites objections from the public, Chari refused to accept this is an “abominable violation of the right of citizens to convert” and that it amount to a “monstrous law”.

He would not accept that changing your religion to marry a person you love is the highest expression of love nor would he accept that in a heterogeneous country, comprising a perplexing plethora of creeds, castes, cultures, cuisines and complexions, inter-marriage between faiths is the surest way of uniting the people.

Finally, Chari was asked if he was worried the incoming Biden administration could ask the Modi government embarrassing questions about its general attitude to Muslims and, perhaps, “love jihad” in particular and responded that the government can handle these with ease.