Vikram Randhawa was seen in a video exhorting his supporters to beat up Kashmiri Muslims who celebrated Pakistan's cricket victory against India. 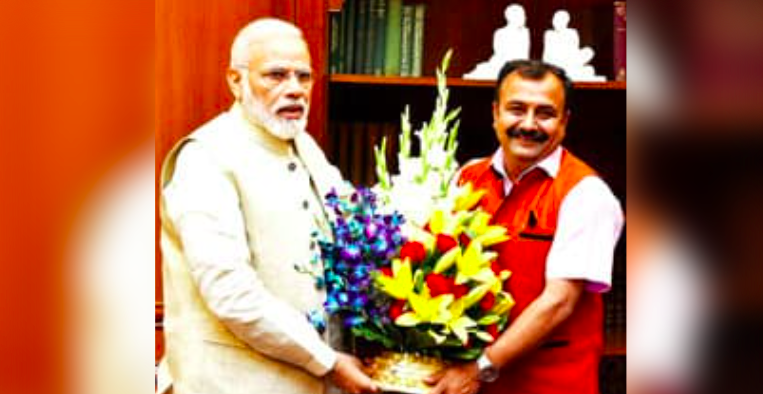 Srinagar: The Jammu and Kashmir police have booked a senior Bhartiya Janta Party (BJP) leader for hate speech after he was caught on camera using racist slurs to call for violence against Kashmiri Muslims who cheered for Pakistan in their recent T20 World Cup match against Team India.

Vikram Randhawa, a former BJP lawmaker from Jammu region who was recently appointed as state secretary of the party, was seen in a video exhorting his supporters to beat up Kashmiri Muslims and “skin them alive”. The video was first posted on Twitter by Peoples Democratic Party leader Naeem Akhtar.

Akhtar’s post on Randhawa was quote-tweeted by his party president Mehbooba Mufti who highlighted the fact that no action was taken against Randhawa’s open call to violence, but J&K students are charged with sedition for cheering Pakistan.

No action taken against an ex BJP MLA who calls for genocide of Kashmiris & to skin them alive. But J&K students are charged with sedition for merely cheering the winning team. India is surely the mother of all democracies. @JmuKmrPolice @OfficeOfLGJandK https://t.co/71BoNvixni

Sources said the remarks were made by Randhawa during a public meeting in Jammu last week, days after celebrations were reported in parts of Kashmir over Pakistan’s cricket victory.

The police have booked Randhawa for “hurting religious sentiments” and “promoting enmity between religious groups” and filed an FIR (number 357/2021) under sections 295-A and 505 (2) of India Penal Code against him at Bahu police station in Jammu.

Although non-bailable sections of IPC have been invoked against Randhawa, he has not been arrested by the police so far. Repeated calls and text messages to Randhawa did not elicit any response.

In the undated video, Randhawa, who is based in Jammu, the Hindu belt of the Muslim majority state, was seen inciting his supporters to use violence against “Kashmiri Muslims” who celebrated India’s defeat by arch rival Pakistan.

“Those who are involved in these activities should be treated in a way that their coming generations too remember the result of raising anti-India slogans or pro-Pakistan slogans on Indian soil. Not only them, their parents should also realise what kind of ungrateful children they have given birth to,” he says.

He is leader of @BJP4India and hope Home Minister @AmitShah will take note of his vision on #Kashmir pic.twitter.com/i6pb71Mbf3

“I think the agencies are doing a good job. They are not taking it (celebrations in Kashmir over India’s defeat) casually. Since the beginning, we have been demanding that not just their (academic) degrees be cancelled, their citizenship too must be revoked. They should be beaten up and skinned alive,” Randhawa is heard saying in the video.

Then, he he is heard saying:

The inflammatory remarks by the ruling party leader circulated widely on social media, prompting a massive uproar with political leaders in Kashmir as well as ordinary people ̈demanding his immediate arrest.

“So good to see this man making friends with Kashmiri people! He should be made an example out of and the law should deal with him firmly to dissuade others from being as abusive as this man has been,” former J&K chief minister Omar Abdullah said on Twitter.

So good to see this man making friends with Kashmiri people! He should be made an example out of & the law should deal with him firmly to dissuade others from being as abusive as this man has been. https://t.co/r6W0qnEkwz

“What a shame. There seems to be race to abuse muslims.Wannabes, non-entities all pitch in their bit for some publicity. Will this ever end?” asked Peoples Conference general secretary Imran Reza Ansari.

what a shame. there seems to be race to abuse muslims. wannabes non entities all pitch in their bit for some publicity. will this ever end. https://t.co/vn4y4mT1XR

The neighbouring country’s first victory over Team India in a World Cup clash had triggered celebrations in parts of the country, including in Kashmir where youngsters in the capital Srinagar and elsewhere hit the streets, despite a winter chill, and burst firecrackers.

The J&K police had registered two cases invoking the Unlawful Activities Prevention Act in connection with the celebrations at two medical colleges of Srinagar. However, an internal inquiry by Sher-e-Kashmir Institute of Medical Sciences, which runs one of the colleges in Srinagar, on Monday, found that the students had not celebrated India’s defeat.

Meanwhile, according to reports, the BJP’s disciplinary committee has issued show-cause notice against Randhawa for making “disrespectful remarks” against the Kashmiri Muslims.

“A video has gone viral in social media in which you are seen making absolutely reckless and hatred promoting remarks against a particular community. This is unacceptable to the party and has brought disrepute and embarrassment to the party,” news agency PTI reported, quoting the notice.

Randhawa has been asked to explain his remarks within the next 48 hours with the J&K BJP chief Ravinder Raina, who heads the disciplinary committee, warning of “strict action if an apology did not come soon”. Raina, according to the notice, has disowned Randhawa’s statement, saying that it had “nothing to do” with the saffron party.

This is not the first time that Randhawa, who is also the president of All Jammu Stone Crushers’ Association president, has landed himself in a controversy. In May this year, he had accused the Union minister in PMO, Jitendra Singh, district mineral officer Ankur Sachdeva, Jammu divisional commissioner Raghav Langer and SSP Jammu Chandan Kohli of facilitating illegal mining in the Tawi riverbed.

The minister had threatened to file a defamation case against Randhawa, following which he tendered a public apology.

The action against Randhawa comes days after the Ladakh police summoned a senior activist from Kargil, Sajjad Hussain, who has a vocal critique of BJP’s policies in the arid Ladakh region, for a tweet on the violence against Muslims in Tripura.

“Very sad news is coming from #Tripura for a few days, since last week Muslim are being targeted by Hindutva mob, their houses, mosques are being vandalised and burnt. Strongly condemn these non stop attacks on Muslims in #Tripura #StopAttackingTripuraMuslims,” he had tweeted.

In its summons, issued by Station House Officer of Kargil on October 29, the Ladakh police have claimed that the tweet is “likely to possess a big treat (sic) to tourists coming from different parts of the country particularly the members of Hindus and Buddhist communities who are in minority in District Kargil.”