Ground Report: 'We Don't Have Money for Food, How Will We Pay Fines Worth Lakhs?'

In Uttar Pradesh's Rampur, families say innocent Muslims were picked up by the police after the anti-CAA protests, and are now being asked to pay for damages. Rampur (Uttar Pradesh): A day after protests against the Citizenship (Amendment) Act, 2019 (CAA) at Idgah and Hathi Khana Chauraha in Uttar Pradesh’s Rampur district on December 21, Zamir Khan had just returned home after offering prayers as usual when some policemen began banging on the front door of his house. Before Zamir’s wife could get to the door to open it, the policemen had broken in, picked up Zamir and taken him away.

Upon hearing the noise, Mohammed Mehmood, Zamir’s neighbour, came out of his house. When the policemen saw him, they picked him up as well. The police allegedly also entered another neighbour’s house and arrested a young man, Pappu. He was barefoot when they picked him up. The men were beaten all the way to the police state.

When the women and children in all three houses tried to resist, the policemen threatened to lock them up as well, the families claimed in a conversation with The Wire.

After chief minister Yogi Adityanath spoke of ‘taking revenge’ against protesters and recovering the damages done to public property, the Uttar Pradesh police sent a notice for payment of damages amounting to Rs 26,23,000 to Zamir Khan, Mohammed Mehmood and Pappu, and asked them to explain why this amount should not be recovered from them. 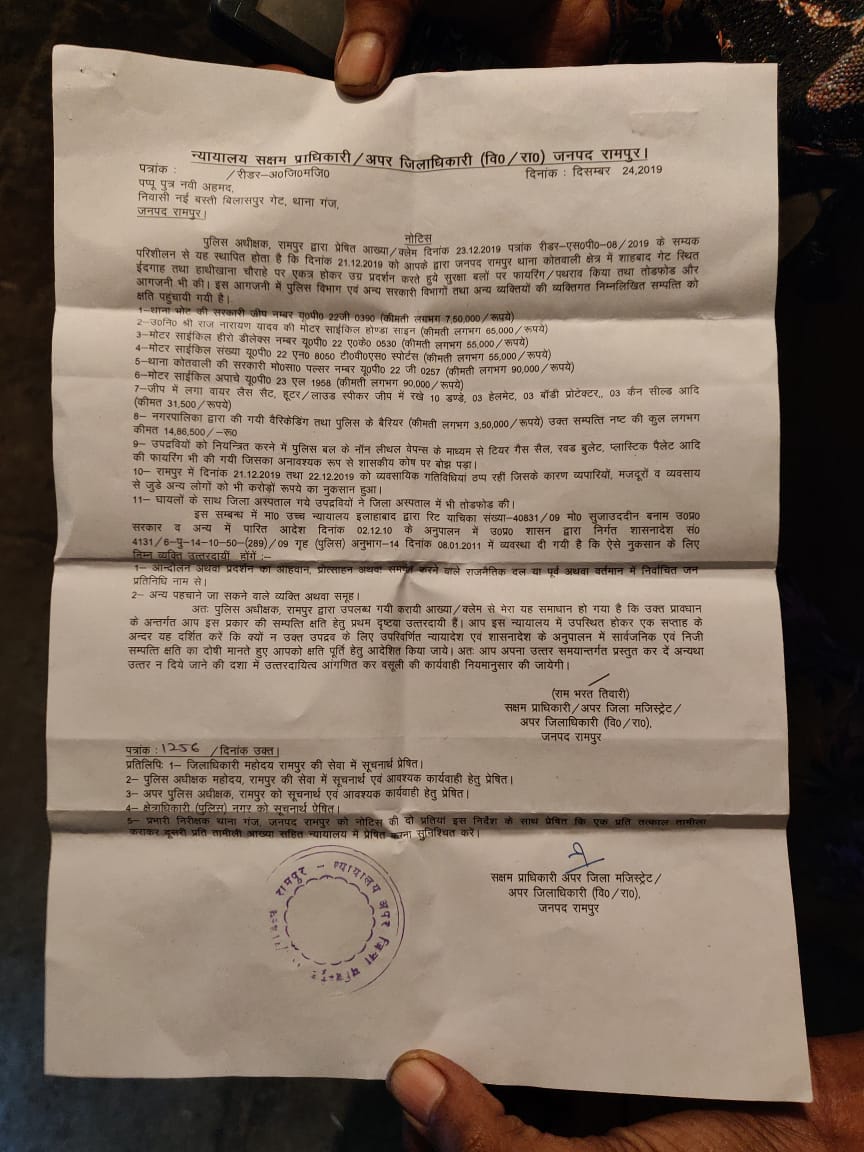 The notice sent to those arrested. Photo: The Wire

The notice seeks to recover costs of tear gas, rubber bullets and plastic pellets used by the police as well as municipality barricading and police barriers, etc.

So far, 400 people have been served notices in various districts of Uttar Pradesh. The Adityanath government has based this on a December 2, 2010 order from the Allahabad high court, which speaks of recovering damages from those who destroy public property.

However, an order from the Supreme Court in the matter states that the high court can take such action but not the government.

Zamir Khan’s 60-year-old mother, Munni Begum, is sitting at the main gate of the house in the biting cold. After the policemen broke the gate, she has to stay awake and guard the entrance. While her son languishes in jail, there is no one else who can get the gate fixed.

Zamir’s wife, Tasleem Jahan, says that in the evening, some policemen arrived at the house and handed them a notice saying, “Get someone to read it, you have to make the payment.”

No one in the family can read or write, so Zamir’s mother has sent the notice to the Qazi to read and find out its contents.

Taslim Jahan says, “We don’t know what is written in it. The policemen took our thumb impression. I have heard that we have to pay damages of several lakh rupees. My children are still hungry. We don’t have money for food, how can we pay a fine worth lakhs of rupees?”

She says, “There is no record that my son has been involved in any wrongful activity. He has no legal case against him. He had never seen a jail or a police station in his life. If he doesn’t earn daily, the expenses of the family cannot be met. He has a 10-year-old son and a four-year-old daughter.”

“When we asked them why they had taken my innocent son, they replied that they had orders from above,” she adds. 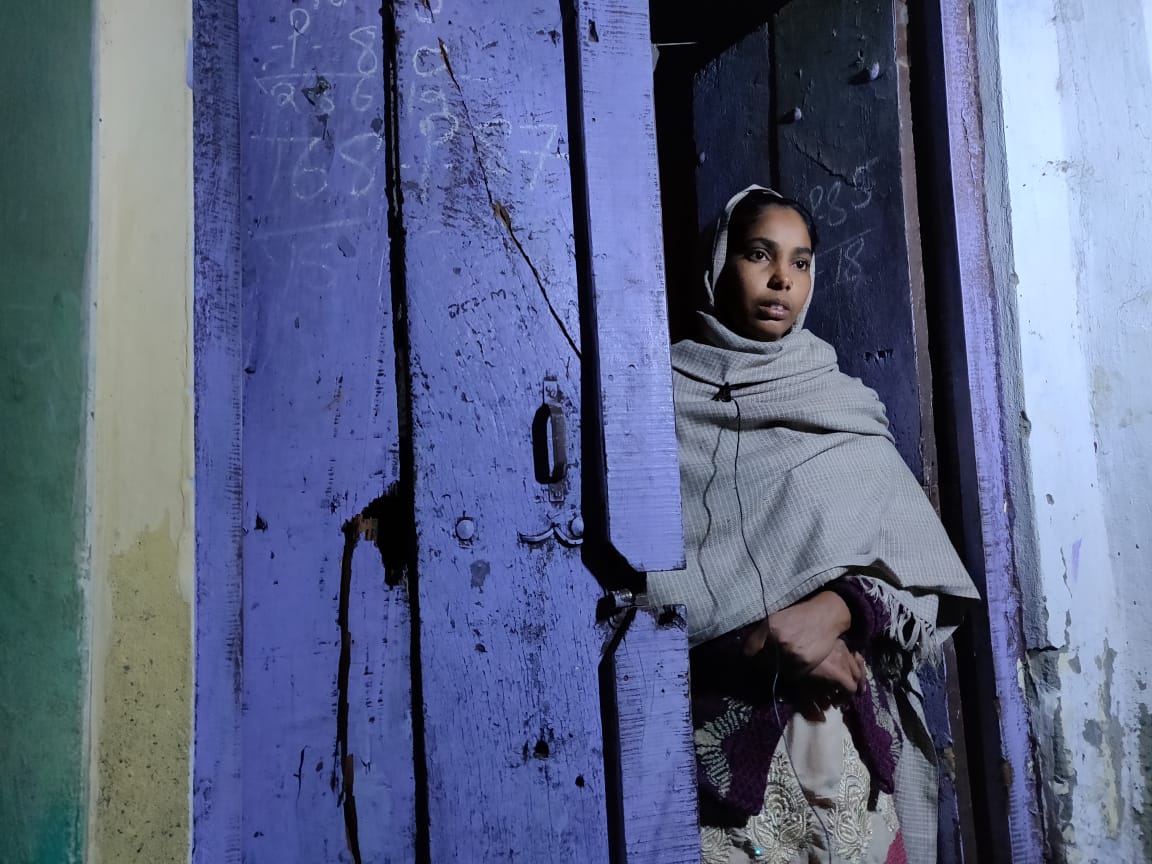 In Rampur’s Nai Basti, Mohammed Mehmood lives in a rented house next to Zamir. He used to work as a street vendor selling spices. “My husband did not participate in any protest,” says Mehmood’s wife Shabnam. “He was at home. When he heard someone banging the door of the neighbour’s house, he came out to take a look. That’s when the policemen grabbed him. When I yelled and cried, two lady cops approached towards me to beat me up.”

She further adds, “I have a two-year-old daughter. I live alone. When the police arrested my husband, he had Rs 4,340 in his pocket. He had to give the money to someone. He was also carrying the receipt for it. The police took the money and kept it. Now, they have sent a notice for payment of lakhs of rupees. Tell me, where will we get the money from?”

Recalling the police’s actions, she says, “It is nothing but cruelty. When he did not attend any protests, and did nothing wrong, why did the police arrest him? How would we know who pelted stones? They won’t even find my husband in video footage because he was at home.”

Also read: Ground Report: Hawkers Arrested in Gorakhpur Are Still Wondering What They Did Wrong

Shabnam says that if the police do not release her husband and continue to persecute him, they should put her and her daughter in jail too. Who will support them, she asks. “We are being asked to compensate but who will compensate those who have lost family members?”

Pappu’s wife Seema says that her husband was unwell on December 22, and so was at home. He was fixing the light in the house when the police began banging on the door. They barged in and without giving her husband the chance to wear slippers, dragged him to the police vehicle and took him away.

Pappu is a welder and also repairs air conditioners. Seema says, “We are daily wage earners. I don’t have the power to pay this much money. For the past three days, the stove has not been lit. My daughter is ill but there is no money for medicine.”

Seema has four daughters and a son. She says that she could not get her children better education because of the family’s poor financial condition. While two children attend a government school, the other two stay at home. 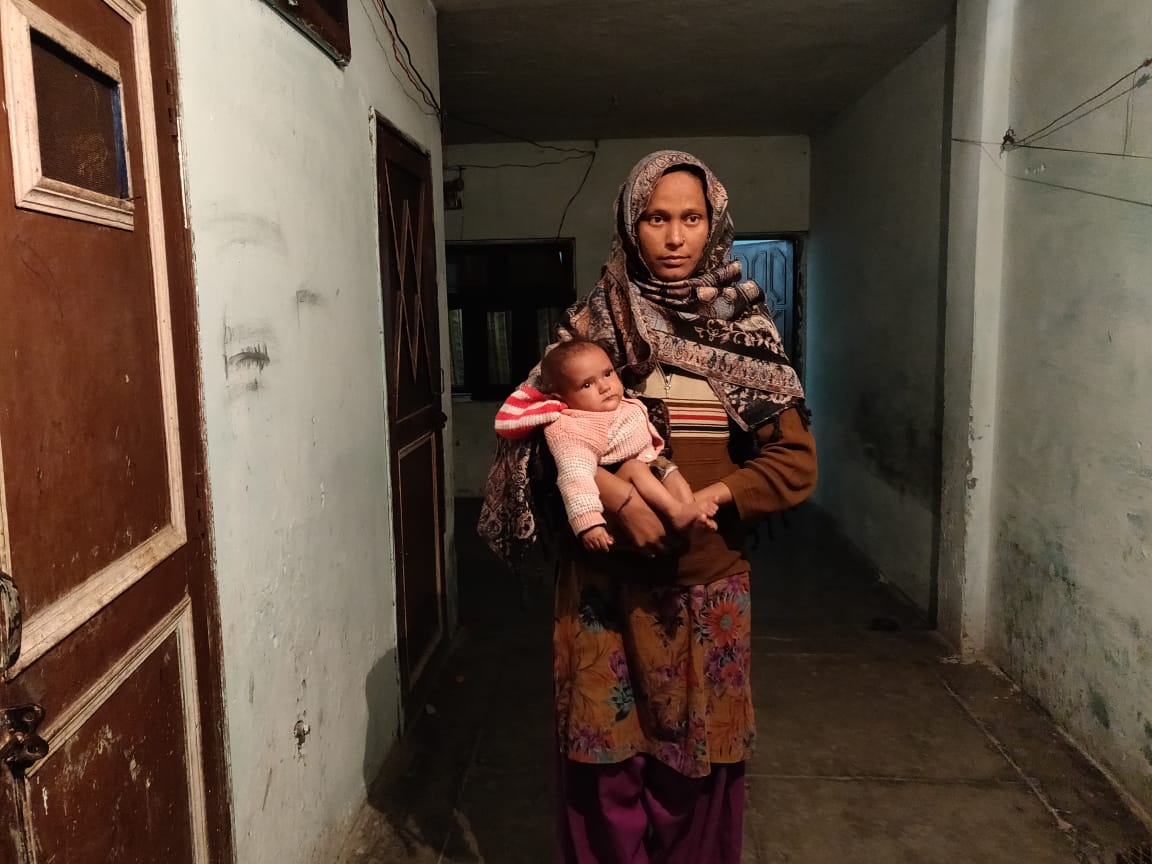 The family members of all three men also allege that when the police came to hand them the notices, they asked for money in exchange. Seema says that the policemen asked her pay Rs 200 but she only had Rs 50, which she gave them.

Mehmood’s wife Shabnam says, “If we raise our voices after such brutality blame Muslims for behaving this way. When we complain of something, we are asked to provide proof.”

Meanwhile, a former member of Congress and local leader Faisal Lala says that the police have rounded up a large number of innocent people.

When a team from The Wire visited him for a meeting, the family members of two of the detained persons were at Faisal Lala’s house requesting him to get their sons released.

The family members were so scared that they asked The Wire not to publish anything about them. The father of one of the men picked up by the police said, “If you write anything, they will beat up my son in prison.”

The mother of the young man was repeatedly saying, “Allah! My son has done nothing. He was not even present there. Let me see my son once.”

The young man’s mother is a heart patient. Recounting her grief, she began to grow breathless and fell unconscious.

Also read: Why the UP Police Claim About PFI Organising Anti-CAA Protests is Hard to Believe

Faisal Lala says, “The location of the boys can be traced from their mobile phones. I can claim with certainty that they were not there. The police have forcefully locked up many such people.”

The Rampur police have arrested more than 30 and named 116 people so far under 17 sections, including Section 307. The FIR includes thousands of unknown persons. Faisal Lala claims that the police have deliberately mentioned thousands of people as unknown in the FIR so that if anyone raises their voice, they can be arrested.

According to the police, protesters fired and pelted stones at the security forces. Also, vandalism and arson caused damage to the police department and other government departments, as well as other properties.

Rampur SP Ajay Pal Sharma said that so far, 28 people have been served notices after identification from video footage and in the coming days, more people will be sent the notice as well.

However, family members say are not educated enough to respond to the notices themselves, and nor do they have the resources to hire a lawyer to prepare a legal reply.

Zamir Khan’s mother Munni Begum says, “We are facing injustice in every way. Whether or not they give justice to my son, Allah is watching over us. He is the best judge.”