The policy advertised by the Valentis Cancer Hospital, Meerut, is discriminatory and the hospital must apologise or else we will cancel its license, district chief medical officer Raj Kumar told The Wire. 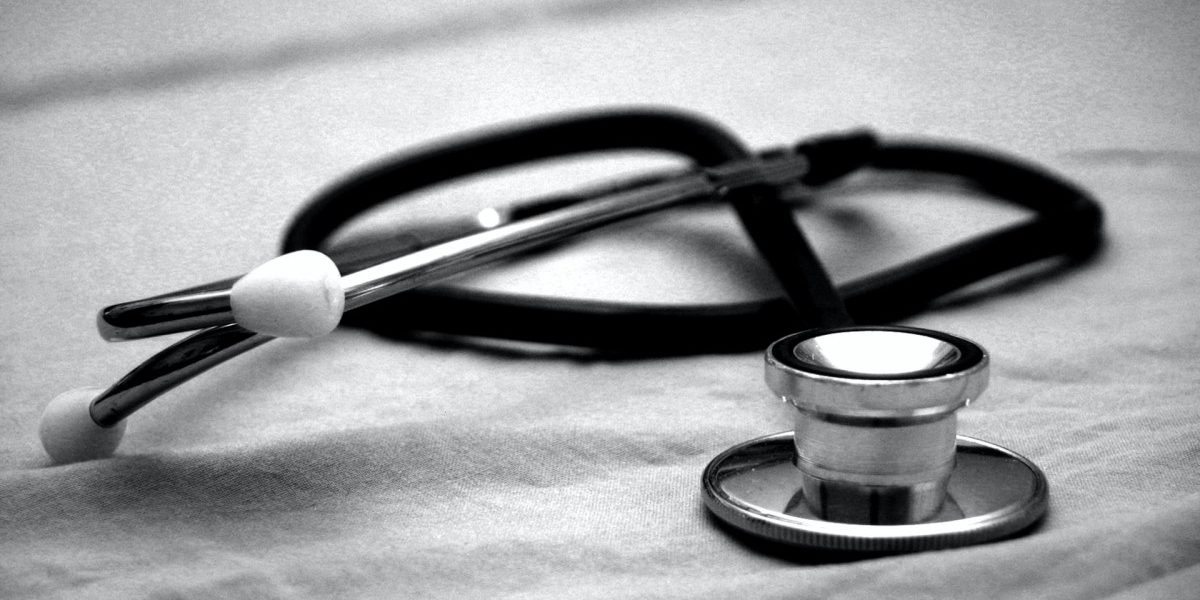 New Delhi: A cancer hospital in Uttar Pradesh’s Meerut has published an advertisement in the Dainik Jagran newspaper that it will no longer accept new Muslim patients unless the patient and a caretaker come with negative test results for COVID-19. The hospital is a dedicated cancer hospital with 50 beds and caters to the population around Meerut including Mawana, Sardhana and Muzaffarnagar.

“Several Muslim patients are not following the guidelines (like using a mask, maintaining hygiene) and they are also misbehaving with hospital staff. For the security of hospital’s staff and patients, the hospital administration requests all new Muslim patients that they and one designated caretaker get tested for COVID-19 and visit the hospital only if their reports are negative,” a part of the advertisement issued by the Valentis cancer hospital in the Meerut edition of the Hindi daily on Friday read. 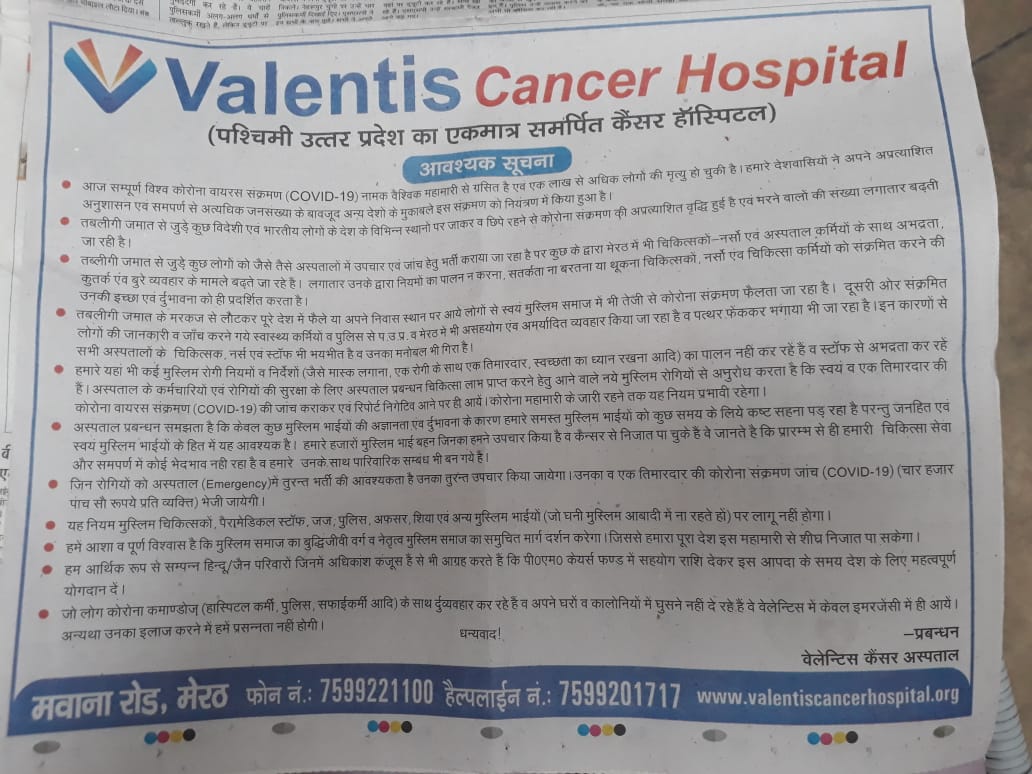 Advertisement placed in the Meerut edition of Dainik Jagran by the Valentis Cancer Hospital, Meerut, on Friday, April 17, 2020.

This policy adopted and publicised by the hospital is a violation of the National Human Rights Commission’s charter of patient rights which was adopted by the Union Ministry of Health and Family Welfare and circulated in March 2019. According to point 8 of the charter, titled ‘Right to Non-Discrimination’, no patient can be denied treatment on the basis of his/her religion or illness.

“Every patient has the right to receive treatment without any discrimination based on his or her illnesses or conditions, including HIV status or other health condition, religion, caste, ethnicity, gender, age, sexual orientation, linguistic or geographical /social origins. The hospital management has a duty to ensure that no form of discriminatory behaviour or treatment takes place with any person under the hospital’s care. The hospital management must regularly orient and instruct all its doctors and staff regarding the same,” the charter says.

The hospital’s advertisement claims that the number of COVID-19 patients has grown ‘unexpectedly’ due to the Tablighi Jamaat gathering in New Delhi. It says that most of the patients in Meerut too are connected to the gathering.

“All but two cases in Meerut are connections of the Tablighi Jamaat,” said Dr. Amit Jain, a radiation oncologist and part of the management team of the hospital.

This claim is not accurate. According to information released by the directorate of health services Lucknow on the evening of April 18, 70 patients from Meerut have tested positive for COVID-19. Of these, 46 were connected to the Tablighi Jamaat gathering.

The Valentis hospital advertisement goes on to say that people connected with the Tablighi Jamaat gathering have not been cooperating with the administration, doctors and nurses. Recently, a team of medical professionals was attacked in Meerut’s Jali Kothi area when they had gone to take a few attendees of the Jamaat staying in the area for testing. 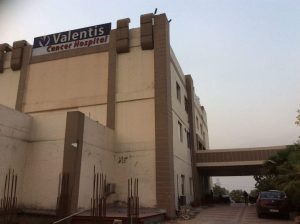 The hospital, however, has decided to maintain a relatively ‘lenient’ stance towards emergency patients who are Muslim. It says that patients requiring emergency medical aid can get admitted but their swab samples for COVID-19 will be sent compulsorily to the Meerut medical college for a cost of Rs 4,500 to be borne by the patient.

It has also said that Muslims who are doctors, paramedics, judges, police personnel, teachers and ‘other Muslim brothers who don’t live in densely populated Muslim areas’ are exempt from the hospital’s new diktat.

“It is quite clear in Meerut that all the COVID cases are coming from Muslim dominated localities. So, it is easy to identify them. It proves a risk for all other patients and to doctors and staff if muslims from these areas are allowed to come into the hospital without tests,” said Jain.

He also clarified that the need to get tested will not apply to people from religions other than Islam living in Muslim dominated localities. “In any case there are very few others in these localities. I am not saying that people from other religions cannot get the disease. But the reality is that almost all patients are Muslims coming from densely populated Muslim areas,” Jain said.

The advertisement says that the hospital is “hopeful that the intellectual class and the leadership among the Muslim community can provide guidance to the community and that because of this our country will be able to eradicate COVID-19 soon.”

Hospital apologises in clarification to Hindus, Jains for calling them ‘stingy’

A day after placing this advertisement, the hospital paid for a second notice in the Dainik Jagran. “It has come to our notice that some people of the Hindu and Jain faith have been hurt due to our notice yesterday. A wrong message has gone and we regret it and ask for forgiveness,” the clarification said. 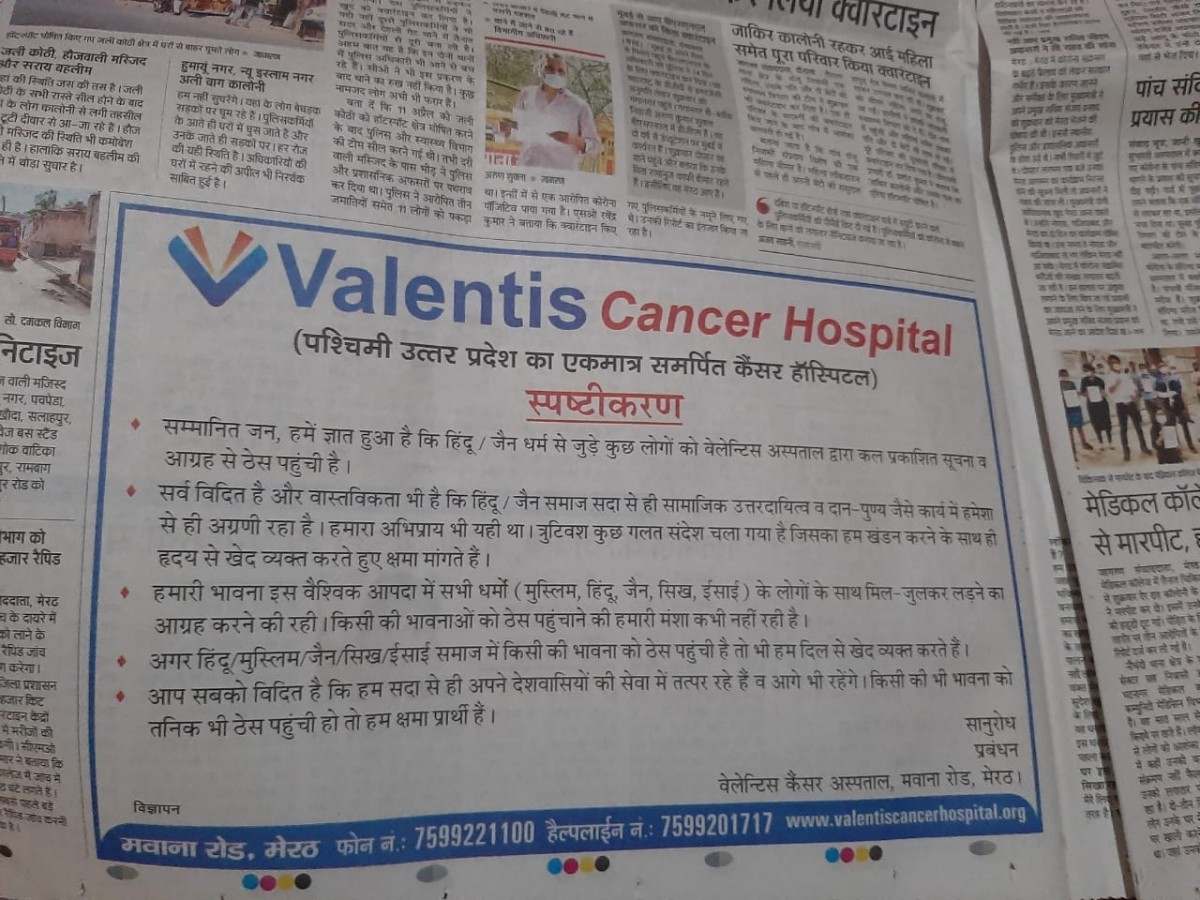 Clarification published by the Valentis Cancer Hospital in the Dainik Jagran (Meerut edition) on Saturday, April 18, 2020.

The last part of the original advertisement had appealed to ‘wealthy’ Jain and Hindu families who are ‘known to be miserly’ to donate to the PM-Cares fund.

“Apparently, the description of Hindus and Jains as miserly had hurt some people. It was a typo. It was not intentional. We regret the error,” Jain told The Wire.

However, the ‘clarification’ stayed clear of any apology or regret on its stance towards Muslim patients. The hospital continues to say that it will not admit Muslim patients ‘living in Muslim dominated areas’ unless they come with a COVID-negative test result.

“We are only saying that Muslims coming from hotspot areas have to come with a negative test result. This is for their safety only and the safety of all our patients. We are not doing this to discriminate on the basis of religion. We treat Muslim brothers on a daily basis,” Jain said.

Apart from violating the patient charter of rights, doctors at the Valentis Cancer Hospital who discriminate against Muslim patients would appear to be violating  point no. 4 in the Declaration every doctor in India must sign under the Indian Medical Council (Professional Conduct, Etiquette and Ethics) Regulations 2002.

“I will not permit considerations of religion, nationality, race, party politics or social standing to intervene between my duty and my patient,” the text of the declaration states.

Article 15 of the Indian constitution says, “No citizen shall, on grounds only of religion, race, caste, sex, place of birth or any of them, be subject to any disability, liability, restriction or condition with regard to access to shops”, an expansive term that includes hospitals.

When Dr B.R. Ambedkar was asked during the constitutional assembly debates if the ban on discrimination applied to access to doctors and lawyers, he said, “It will include anybody who offers his services. I should like to point out … that the word ‘shop’ used here … is used in the larger sense of requiring the services if the terms of service are agreed to.”

“They have not said that Muslims will not be allowed. The only objectionable part was the part about Hindus and Jain being miserly. And they have apologised for that. So it doesn’t look like any action is needed at the level of the police station. But even then we are looking into it today and if any action needs to be taken we will do so,” Singh told The Wire.

The Meerut district administration on Sunday directed the hospital to tender an apology, or its license would be suspended. “By discriminating on the basis of religion the hospital has violated medical ethics. We will issue a notice to the hospital and it will have to issue offer a public apology. If it doesn’t do so its license will be suspended for discriminating on the basis of religion,” said Meerut chief medical officer Raj Kumar.

Note: This article was updated to include the Meerut police and administration’s response.