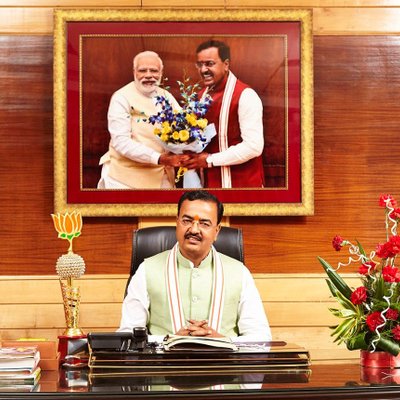 New Delhi: In an interview to BBC Hindi, Uttar Pradesh deputy chief minister Keshav Prasad Maurya refused to condemn the hate speeches and genocidal calls made at the Haridwar Dharma Sansad in December.

According to BBC Hindi, after the cameras went off, Maurya also “pulled off the reporter’s mask” and told his security personnel to immediately have the video deleted. The channel said it managed to recover the footage and has published the interview in full.

“The BJP doesn’t need to prove anything to anyone, we promote ‘Sabka saath, sabka vikas‘,” Maurya told the reporter, Anant Zanane, when asked why the prime minister, chief minister and other senior leaders had maintained a silence on the issue. “And religious leaders have the right to say whatever they want. Why do you only talk about Hindu religious leaders? Have you seen the statements made by others? Why don’t you say anything about that? Why don’t you talk about all the people who had to leave Jammu and Kashmir before Article 370 was revoked?”

“When you raise questions, they can’t be one-sided,” Maurya continued. “The Dharma Sansad wasn’t organised by the BJP. That is done by priests. And what priests say or don’t say in their programmes is their prerogative.”

The reporter then named some of the Hindutva leaders who were seen making hate speeches at the event, including Yati Narsinghanand and Annapurna. “The kind of atmosphere these people are creating…” the reporter said, before being interrupted by Maurya: “They are not trying to create any kind of atmosphere. What they think is right to say on their platform, they say. You are asking me questions that have nothing to do with politics. I have not even seen what you’re talking about. But if you’re talking about religious leaders, there are religious leaders in all religions. You should gather what all of them are saying, and only then ask questions. Then I will answer. If you had told me you wanted to ask this, I would have been prepared.”

When asked again about genocidal speech in Haridwar, ‘You are a reporter, Don’t act like someone’s agent’.
Dosti bani rahe moment. pic.twitter.com/cejJ7KQbNm

The reporter asked again about the Dharma Sansad, at which point Maurya said, “These Dharma Sansads happen everywhere. What they want to say, they say. Like what right does the All India Muslim Personal Law Board have to say that they don’t agree with the suryanamaskar? Don’t do it if you don’t want to.”

“But there is no talk of murder there,” the BBC reporter said. “Here also there is no such talk,” Maurya responded.

“There are videos that contradict that,” the reporter said.

“I don’t know what videos you’re talking about. The questions you have, are they about the elections or some other subject?” Maurya said.

“This is all related to the elections, it is happening around election time,” the reporter said.

“Don’t just combine everything like this,” Maurya said. “Speak like a journalist. You’re not speaking like a journalist, you’re speaking like someone’s agent.” The deputy chief minister then decided that the interview was over. “I’m not talking to you,” he said, removing his lapel microphone and getting up from his seat.

At the Dharma Sansad held in Haridwar between December 17 and 19, Hindu right leaders made open calls for violence against Muslims. The event was also attended by BJP leader Ashwini Upadhyay, who has previously been arrested for an event he helped organise where slogans were raised calling for violence against Muslims, and BJP Mahila Morcha leader Udita Tyagi, giving the event a level of political encouragement from the ruling party.

No leaders of the BJP have so far condemned what was said at the gathering.