As the UK Embraces Its Diversity, Indians Need to Ask Why India is Turning Its Back on Its Own

Far from being able to aspire to the top job in India, Muslims everywhere see prudence in remaining invisible. This is modern India’s ugly reality and the sooner we recognise this and start working to change it, the better. 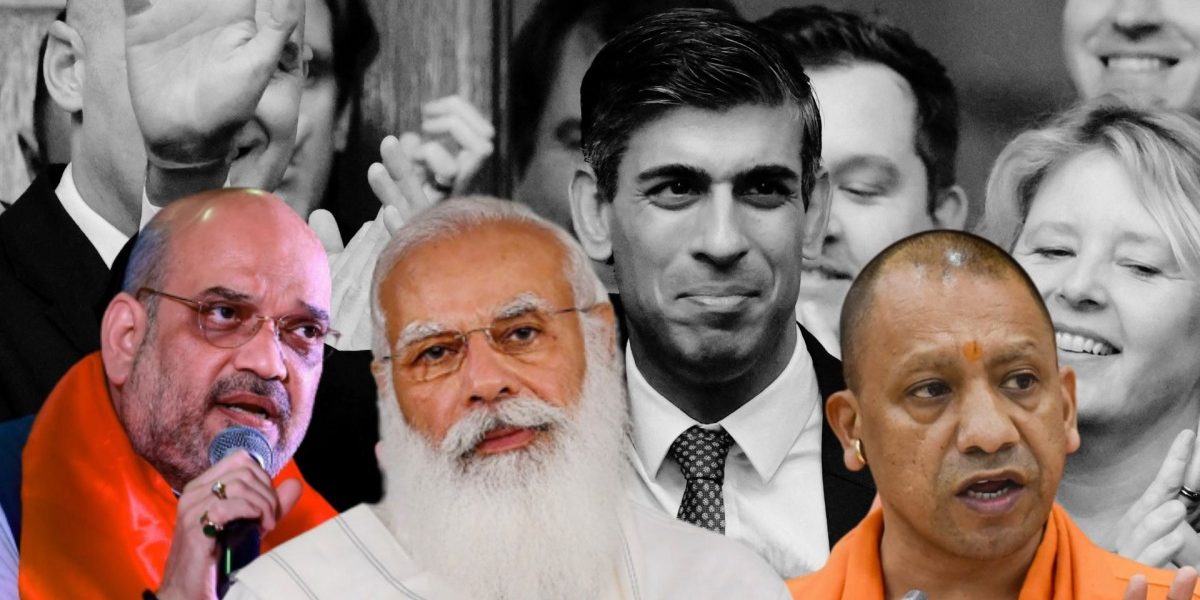 New leader of the Britain's Conservative Party Rishi Sunak walks outside the Conservative Campaign Headquarters. In the foreground are Amit Shah, Narendra Modi and Adityanath. Photos: Reuters and PTI.

I lived in London from 1979 to 1986 – as a student rather than as a migrant – but saw enough of British life then to appreciate exactly how far the country has travelled in the 36 years since I left its shores.

I was 14 when my father was posted to London, and 21 when I moved to New York. In those seven years, I completed my ‘O’ and ‘A’ levels from a comprehensive school in a South London working class neighbourhood and went on to read economics at the LSE. Margaret Thatcher was prime minister throughout this time, casual racist violence by fascist thugs from the National Front and British National Party was a fairly routine occurrence and the racism of the police – especially towards young people from the Black community – was a fact of life.

I never encountered any physical abuse and little by way of racial taunts either. During a lunch break football game in my first or second week at school, a white British kid on my side shouted to me, ‘pass the ball, Stan’. When the game ended, I told him my name wasn’t Stan. His reply cracked me up: “Oh, I meant Stan as in Pakistan”. As I recall, he said this in the least offensive way – without emphasis on the ‘Paki’ part of the word. He and his friends asked me my name and said if it was ok if they called me ‘Sid’.

From that day on, I never had any problem at the (overwhelmingly white) school. But it was clear that British society had a problem with racism, fuelled by overblown demographic fears (stoked by right wing politicians) and unfounded questions about the ‘loyalty’ to Britain of immigrants and their descendants.

Blacks and South Asians were not very visible in public life when I arrived but things were beginning to change by the time I left. There hadn’t been a South Asian or Black in the House of Commons since Shahpurji Saklatvala, the Indian-origin communist, lost the Battersea seat in 1929. But in 1987, Diane Abbott, Paul Boateng and Keith Vaz got elected and soon others followed.

This is my own little backstory to the remarkable rise of an Indian-origin MP to the post of prime minister.

Sure, Rishi Sunak’s life experiences may not be representative of those of most immigrant families but then neither have the life experiences of the other men and women – all white – who have been PM. In the UK, if there is one aspect of life that has not changed in decades, it is that class trumps race. But that’s a question for another day.

Also read: Does It Matter that Rishi Sunak Is the UK’s First PM of Indian Descent? Yes.

Indians in India have greeted the news of Sunak’s elevation with a feeling of awe and pride. For Sunak, this is a remarkable personal achievement. Most of all, it is the British people as a whole who have a right to feel proud about this profoundly symbolic moment. They have embraced and celebrated their diversity in a remarkable fashion and they are not the only Europeans to have done so. Ireland and Portugal have both had prime ministers of Indian origin. But instead of feeling happy for themselves, Indians in India sorely need to introspect about what has happened not just to the religious diversity and cultural pluralism that has been a part and parcel of Indian life for thousands of years but to India’s own history of real and even symbolic exclusion of entire communities on the basis of caste.

When Sunak was among the top contenders for the job (in a run that proved unsuccessful that time around), Kancha Ilaiah drew attention to the lesson in tolerance that ‘Christian’ Britain was now offering what he called ‘Hindu’ India:

“Britain bestrode a Christian colonial empire. Yet that Britain now allows Sunak to compete for the top job. No British opposition leader or even his party’s own competitors for prime minister have raised the question of his religion. His wealth, yes. His attitude toward the working class, yes. And his wife’s tax avoidance, yes. All very good questions in a democracy. (These questions, by the way, are rarely asked in India.)”

Compare the situation to that of India, where the government does not have a single Muslim minister and where the Bharatiya Janata Party and Sangh parivar have made it their mission to polarise India on the question of religion, especially Islam. Party leaders don’t think twice about vilifying Muslims and proclaiming their Hindu credentials. Unlike Britain, the question of religion has become paramount in the political discourse of the ruling establishment.

Even Prime Minister Narendra Modi has engaged in this politics. Witness the farewell speech he made for Vice President Hamid Ansari where he reduced a diplomat and statesman of great accomplishment to an individual whose career had been confined to a “circle” of postings linked to Islam. Or his reference to the Muslim protesters against the Citizenship (Amendment) Act as people who could be recognised from the clothes they wear. In a speech delivered in the midst of the 2019 general election, Modi mocked Congress leader Rahul Gandhi for standing from Wayanad, a constituency where “the minority is the majority”.

Other BJP leaders like Yogi Adityanath tend to be more brazen in their speeches, as was Modi too, during the early years of his chief ministership. But the broad picture is such that India’s minorities, and especially Muslims, find themselves under attack on virtually every front – their sense of belonging in India assailed in the very same way that racists in Britain tried to do to Blacks and Asians for decades. ‘Muslim-sounding’ names of towns, localities, trains etc are being changed, school textbooks are being edited to reduce the salience of Muslims and Islam in India, Muslims accused of an unlawful act can have their home demolished as pre-trial punishment without the courts batting an eyelid.

Far from being able to aspire to the top job in India, Muslims everywhere see prudence in remaining invisible. Signs of diversity are considered best left hidden else they can and will be penalised. This is modern India’s ugly reality and the sooner we recognise this and start working to change it, the better.