Udaipur: Two Arrested for Brutal Murder of Tailor Who Had Backed Nupur Sharma on Social Media

As tensions built over the killing, Rajasthan chief minister Ashok Gehlot said that those involved in the murder would be punished strictly, asking people to remain calm. Prohibitory orders are in force across the state. 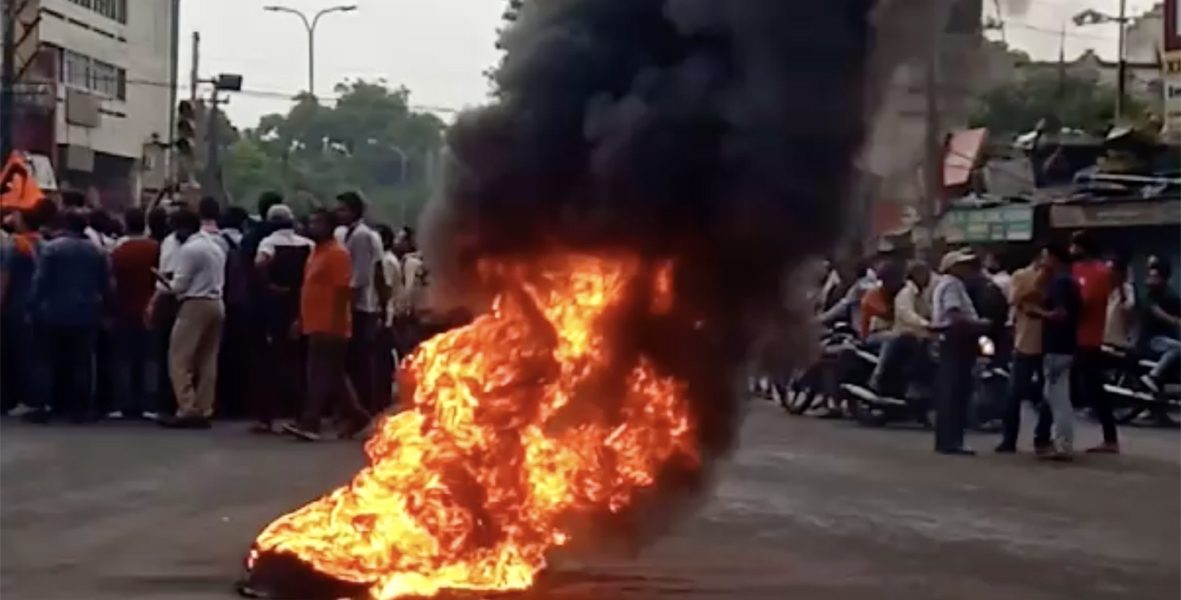 Smoke billows from a burning object after violence erupted in the area following the murder of a tailor named Kanhaiya Lal, in Udaipur, June 28, 2022. Photo: Screengrab via PTI

New Delhi: A tailor who extended support to suspended BJP spokesperson Nupur Sharma was brutally killed at a shop in Rajasthan’s Udaipur on Tuesday. Two men involved in the killing have been arrested.

As tensions built over the killing, chief minister Ashok Gehlot said that those involved in the murder of Kanhaiya Lal would be punished strictly, asking people to remain calm.

Within hours of the murder, prohibitory orders banning the assembly of people were imposed across the state for a month and mobile internet services suspended for the next 24 hours. At 8 pm, curfew was declared till further orders in seven police station areas of Udaipur city.

Two men who identified themselves as Mohammad Riyaz and Ghouse Mohammed posted a video online claiming responsibility for the killing and threatened Prime Minister Narendra Modi. They add, “Narendra Modi, tu ne aag jalaya hai. Hum bhujayenge. (Narendra Modi, you have started the fire. We will douse it.)” They also threaten to kill the prime minister.

The duo has been arrested. 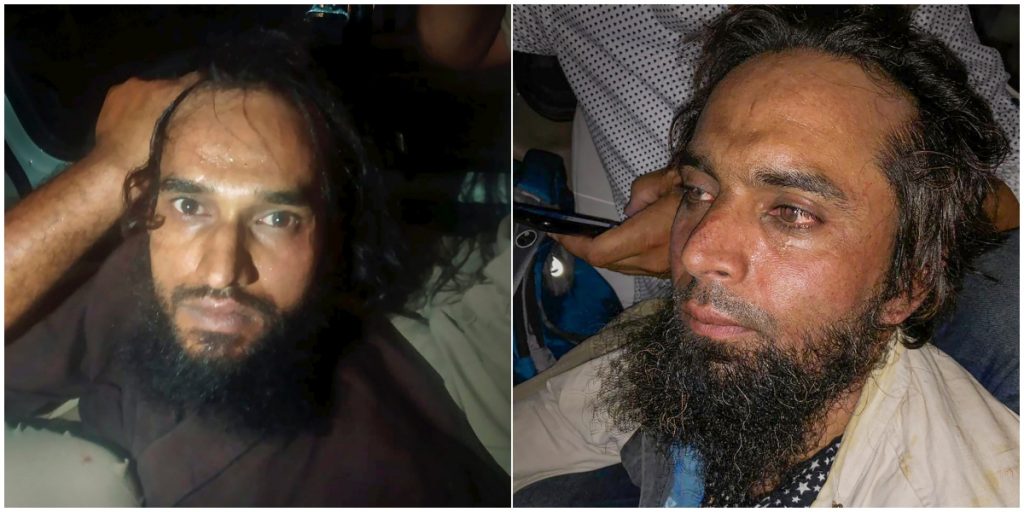 Riyaz and Ghouse Mohammed, who are accused of killing tailor Kanhaiya Lal in Rajasthan’s Udaipur on June 28, 2022. Photo: Police handout via PTI

According to news agency PTI, the accused reached Kanhaiya Lal’s shop on Tuesday afternoon under the Dhan Mandi police station area in the Maldas street area. One of the assailants, who was identified as Riyaz, attacked Kanhaiya with a sharp-edged weapon while the other recorded the killing on his mobile phone, police said.

Following the murder, local markets in the area were shut as the traders demanded that the accused be arrested. There were also protests in some areas, according to news agency ANI.

According to The Hindu, Lal was earlier booked in connection with his post and questioned by the city police. His shop had remained closed for a week because he feared for his life and started coming to his shop only from Monday.

Shopkeepers stopped police from taking away the body, saying they will allow the removal of the corpse only after the murderers are arrested and compensation – Rs 50 lakh and a government job – given to the victim’s family.

Shops in Maldas street area have been closed following the incident. pic.twitter.com/ZC113q0iJj

Gehlot condemned the incident and appealed to the people to maintain peace while assuring strict punishment for those involved in the murder.

According to The Tribune, the 40-year-old Lal published a social media post supporting Sharma, whose controversial remarks against Prophet Muhammad received widespread condemnation.

The newspaper said that Lal had been receiving threats “from persons of a certain community” since he supported Sharma.

According to The Tribune, Gehlot described the crime as “brutal beyond imagination” and said he had spoken to the leader of the opposition Gulab Chand Kataria seeking support in maintaining communal harmony.

“What has happened is extremely sad, shameful. There is tension in the country. I have been repeatedly urging Prime Minister Narendra Modi and home minister Amit Shah to address the people and calm the tempers. Every nook and alley is volatile. People are in fear. The PM should appeal for peace. It will help,” Gehlot said.

The internet has been suspended in Udaipur for 24 hours.

Curfew was imposed in seven police station areas of Udaipur from 8 pm on Tuesday till further orders after the killing of a tailor that triggered communal tension in the Rajasthan city.

A state-level alert has been issued and range IGs (inspector generals) and SPs have been asked to increase patrolling and force mobility as a precautionary measure, ADG Law and Order Hawa Singh Ghumaria said.

Chief secretary Usha Sharma directed officials to suspend mobile internet service across the state for 24 hours and impose section 144 of the Criminal Procedure Code (CrPC) – preventing the assembly of more than four people – in all districts of the state for a month.

Leaves of police and administration officials have also been cancelled.

The chief secretary has directed all divisional commissioners, inspector generals of police and district collectors to take special vigil across the state, an official statement said.

Several politicians, including Rahul Gandhi of the Congress and Asaduddin Owaisi of the AIMIM, have condemned the killing. Rajasthan BJP chief Satish Poonia blamed the Congress’s “appeasement policy” for the brutal murder.

The Jamiat Ulema-e-Hind also condemned the heinous killing , saying such an act cannot be justified in any way and is against the religion of Islam.

In a statement, Maulana Hakeemuddin Qasmi, general secretary of the Jamiat Ulema-e-Hind, condemned the “brutal killing in Udaipur apparently on the pretext of the insult to the Prophet” and called it against the law of land as well as “against the religion of Islam”.

He said whoever has perpetrated this incident cannot be justified in any way and the act was against the law of the land and “our religion”.

“In our country, there is a system of law, no one has the right to take the law into his own hands,” Qasmi said.

Case may be handed over to NIA

The Union home ministry on Tuesday night dispatched a team of investigators of the anti-terror probe agency NIA to Udaipur in the wake of the killing, officials said.

The matter is likely to be handed over to the NIA after registration of a case under the stringent anti-terror law, the Unlawful Activities (Prevention) Act.

Note: This is a developing story. Information will be added as it becomes available.