The Rajasthan police say Ghouse Mohammad visited Karachi in 2014. The Dawat-e-Islami is an organisation of Sunni Barelvis and the assassin of (west) Punjab governor Salman Taseer in January 2011 was linked by Pakistani investigators to the D-e-I. 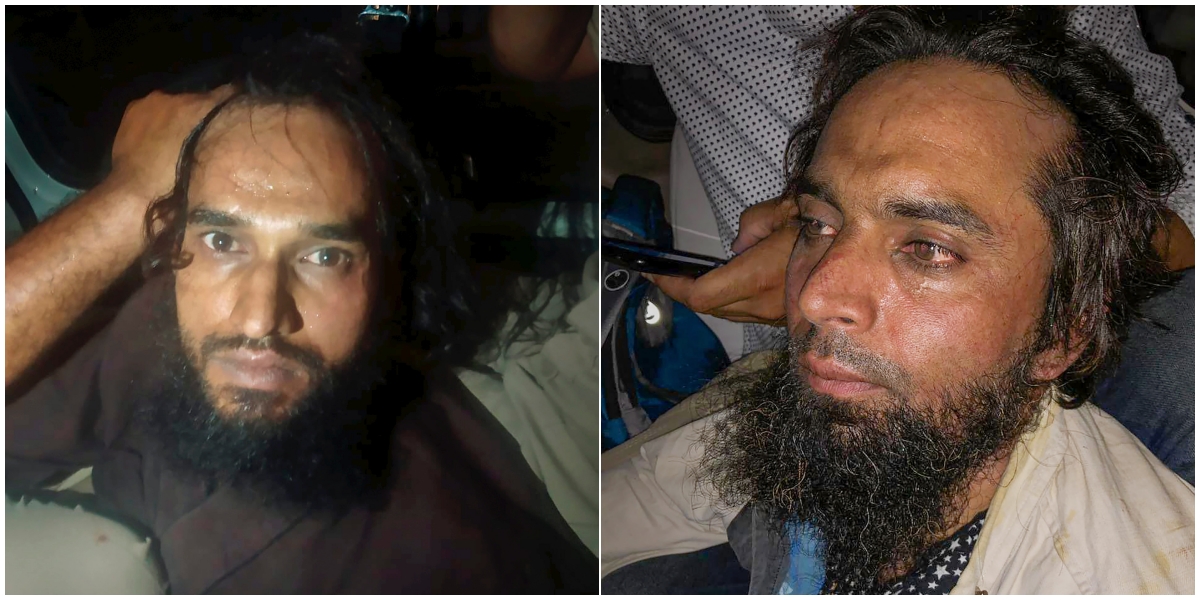 Riyaz and Ghouse Mohammed, who are accused of killing tailor Kanhaiya Lal in Rajasthan's Udaipur on June 28, 2022. Photo: Police handout via PTI

New Delhi: Preliminary investigation into the brutal killing of Kanhaiya Lal, a tailor in Udaipur, revealed that one of the two prime accused has links with the Pakistan-based Dawat-e-Islami organisation and had visited Karachi in 2014, the police in Rajasthan said on  Wednesday.

Disclosing this information at a press conference in Jaipur, Rajasthan director general of police (DGP) M.L. Lather added that the police have detained three more people in connection with the killing.

The prime accused have been identified as Riaz Akhtari and Ghouse Mohammad.

While the former hacked Kanhaiya Lal to death with a machete at his shop in Udaipur on Tuesday, the latter recorded the killing. They later posted videos online, saying they are “avenging an insult to Islam” – an apparent reference to Lal extending support to BJP spokesperson Nupur Sharma, who made controversial remarks on Prophet Muhammad during a television debate last month.

“One of the accused, Ghouse Mohammad, has links with the Karachi-based Islamist organisation Dawat-e-Islami. He had visited Karachi in 2014. So far, we have detained five people, including the two prime accused,” Lather said.

The Dawat-e-Islami is a Sunni organisation influential among the Barelvi sect of Islam. In 2011, the Karachi newspaper Dawn reported that Mumtaz Hussain Qadri – assassin of the then governor of the Pakistani province of Punjab, Salman Taseer – had “links” to the Dawat-e-Islami organisation.

The Sunni Tehreek, an offshoot of the Dawat-e-Islami, is a banned terrorist organisation in Pakistan. Another offshoot of the D-e-I is the Tehreek-e-Labbaik, founded by Khadim Hissain Rizvi. Though the outfit has contested elections in Pakistan, it has also been banned under Pakistan’s anti-terror laws. Its leaders have called for the killing of persons charged with blasphemy and also of the three judges who released a Christian woman, Asia Bibi, wrongly accused of the offence.

Earlier, Rajasthan chief minister Ashok Gehlot had revealed that the police had registered a case under the Unlawful Activities (Prevention) Act (UAPA). The murder was “meant to spread terror”, he said, adding that information has surfaced that the killers have contacts abroad.

The case will be investigated by the National Investigation Agency (NIA) and the Anti-Terrorist Squad (ATS) of Rajasthan Police will fully cooperate with the probe agency, he said.

Gehlot made the remarks after charing a high-level meeting in which he reviewed the situation in Udaipur.

Official sources said the chief minister has also convened an all-party meeting at the his residence at 6 pm on Wednesday over the killing.

Kanhaiya Lal was murdered on Tuesday by two men who subsequently posted videos online where they claimed they were avenging an insult to Islam. The incident triggered stray cases of violence in Udaipur and curfew was clamped in seven police station areas of the city.

Lal was cremated on Wednesday in the presence of a large number of people.

“A high-level review meeting was held today on the Udaipur incident. Police officials said preliminary investigation has revealed that the incident was prima facie done to spreading terror” Gehlot tweeted.

“The police and the administration should ensure law and order in the entire state and take strict action against those trying to create nuisance,” he said.

It has also been decided to give out-of-term promotion to five policemen – Tejpal, Narendra, Shaukat, Vikas and Gautam – who were prompt in arresting the accused involved in the Udaipur incident, the chief minister said.

NIA to take over case

The Union home ministry has directed the National Investigation Agency to take over the investigation of the brutal murder.

“The involvement of any organisation and international links will be thoroughly investigated,” the office of Union home minister Amit Shah tweeted on Wednesday, June 29.

MHA has directed the National Investigation Agency (NIA) to take over the investigation of the brutal murder of Shri Kanhaiya Lal Teli committed at Udaipur, Rajasthan yesterday.

The involvement of any organisation and international links will be thoroughly investigated.

The Union home ministry has dispatched a team of the NIA to Udaipur, PTI has reported.

The Rajasthan Police has also announced a special investigation team (SIT) soon after the arrest of Riaz Akhtari and Ghouse Mohammad.

Areas under the jurisdiction of seven police stations are under Section 144 of the Code of Criminal Procedure. Mobile internet services are suspended across all 33 districts of Rajasthan. The city of Udaipur is under heavy police cover.

Meanwhile, an ASI has been suspended.

“Suspension of one ASI is not enough. Action against the SP should be taken. It was his failure that the local police failed to ensure security of Kanhaiya Lal despite threat to his life,” leader of opposition Gulab Chand Kataria told reporters here.

In a video clip, Akhtari declared that they had beheaded the man and went on to threaten Prime Minister Narendra Modi. Indirectly, the assailants also referred to Nupur Sharma, the BJP leader suspended from the party over a remark on Prophet Mohammad.

One of the accused in the case, Riyaz, had filmed another video on June 17, stating that this video will be out “on the day he would have beheaded those who have insulted Prophet Mohammad.” In the video accessed by The Wire, he asks others to carry out similar actions in the state.

The victim, Lal, had recently been arrested by the local police.

The Wire has learnt that he was taken into custody on the June 11 in connection with a social media post on Islam, which was deemed objectionable by police.

Two letters by Lal to the police have surfaced. Both were dated June 15. In one, Lal appealed to the police at Dhanmandi station to initiate action and grant him protection from threats.

In his letter, Lal stated that while playing with his phone, a child had mistakenly posted objectionable content on Facebook.

Lal states that he was summoned by the station on the basis of a complaint filed against him by his neighbour. He adds that the neighbour had stated that the complaint had been filed “owing to the pressure from the community.”

Lal categorically stated that he was being threatened, was not being able to open his shop and that people had been visiting his shop to threaten him.

However, in another letter produced on the same day, he stated that a compromise had been reached with members of the community and that he no longer wants an investigation.

Additional Director General of Police Law and Order Hawa Singh Ghumaria has confirmed that a case was registered against Lal for posting “objectionable remarks on social media” on June 10 and that “he was arrested like other such cases and presented in court.”

After being released on bail from the court, on June 15, Kanhaiya Lal reached the police station and said that he was getting death threats.

Police have claimed that the local station house officer, immediately after receiving this report, called leaders of both communities to the police station. After talks between the two sides, a mutual settlement was reached, said police.

After the settlement, Lal submitted a second handwritten report stating that no further action was required in this matter.

The ADG said that the persons who came to the settlement are also being questioned by the police.