Twenty-Five Years On, India Has Still to Live Down the Shame of the Babri Masjid's Demolition

The Central Bureau of Investigation is deliberately prolonging the trial while the BJP does its best to use the Ayodhya dispute to once again stoke the flames of hatred.

A day after the demolition of the Babri Masjid on December 6, 1992, a makeshift Ram temple was hastily put in place. Here, a paramilitary soldier is seen offering his prayers at this temple on December 7, 1992. Credit: T. Narayan

India is perhaps the only country in the world where a real crime – committed in broad daylight, with evidence recorded by video cameras and presented in court by prosecutors – counts for less than an imaginary transgression that supposedly happened five centuries ago and left behind no witness accounts or  contemporary records to establish what transpired.

On December 6, 1992, top leaders of the Bharatiya Janata Party – the party that today runs the government at the Centre – gathered in Ayodhya as part of a well-planned conspiracy to demolish a historic monument that was part of the cultural and archaeological heritage of the Indian people. These leaders included L.K. Advani, who went on to become deputy prime minister but is today outside the party’s charmed circle, Uma Bharati, who is currently a cabinet minister in Narendra Modi’s government, and scores of other major and minor figures.

In the run up to the demolition of the 16th century Babri Masjid, the BJP conducted a poisonous propaganda campaign whose aim was the creation of a Hindu vote-bank. The ‘Ramjanmabhoomi’ movement it launched aimed at replacing the mosque with a temple for Ram and rested on three claims that ought to have had no place in either a movement supposedly driven by Hindu belief or in a democracy governed by the rule of law. The first was that the God whom Hindus revere as omnipresent was actually a historical personality, second, that he was born at the very spot where the Babri Masjid stood, and third, that the mosque had to be removed, by force if necessary, so that a grand temple – of the kind allegedly destroyed by Babar – could be built in its place.

If all of this was theologically (and historically) suspect, it was also legally absurd. A state governed by a constitution cannot upend the rights of individual citizens because some group makes a demand on the basis of its beliefs. In 1987, Rajiv Gandhi trampled on the rights of Muslim women in order to win the support of reactionary Muslim clerics who were upset at the Supreme Court’s verdict in the Shah Bano case. That act of injustice was finally reversed 32 years later. But the appeasement of Hindu chauvinism that began with his decision to reopen the locks of the Babri Masjid continues unabated with the courts least bothered about the rule of law despite the mosque’s demolition by Sangh parivar fanatics 25 years ago.

To get a sense of perspective on what the demolition of the Babri Masjid meant then and means today, consider the global outrage that greeted the destruction of the Buddha statues at Bamiyan by the Taliban in Afghanistan in 2001. Like the Sangh parivar, who said the sight of the mosque at Ayodhya offended them, the Taliban declared that their beliefs did not permit the statues to remain standing. There haven’t been Buddhists in Afghanistan for centuries yet every right-thinking Afghan was appalled by this act of terrorism. Around the world, the wanton destruction of historical monuments like the Babri Masjid is considered a war crime. Last year, the International Criminal Court in The Hague convicted a local leader in Timbuktu, Mali for his role in destroying some of the ancient city’s historical monuments that he considered un-Islamic. 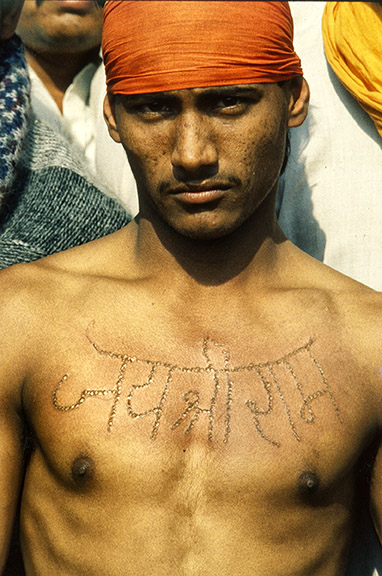 A kar sewak with ‘Jai Sri Ram’ tattooed on his chest near the Babri Masjid on December 6, 1992. Credit: T. Narayan

During a television debate on terrorism in September 2001 where Narendra Modi was a participant – he was then just an RSS pracharak – I cited the demolition of the Babri Masjid by Hindu fanatics and the killings that followed to challenge his claim that “all terrorists are Muslims”. He refused to even acknowledge that the destruction of the mosque was a crime.

CBI’s strategy is to delay matters

We know now from the peculiar manner in which the Central Bureau of Investigation is handling the criminal case that Prime Minister Narendra Modi probably still believes there is no need to punish anyone for the demolition. All the material witnesses in the case have been examined in the trial court and there is ample video footage as evidence to ensure the conviction of the main accused. Yet the CBI is dragging its feet, telling the trial court that it needs to examine still more witnesses in order to prove its case.

During the first NDA government of Atal Bihari Vajpayee and Advani, the CBI simply dropped the ball on the case. But in the wake of the Supreme Court’s decision to reinstate criminal charges against top Sangh leaders and order ‘day-to-day hearings’ at the trial court, the BJP’s strategy is to deliberately prolong matters and ensure that the demolition case goes on and on.

This CBI’s ‘go slow’ strategy was put in place by Y.C. Modi – a police officer who is close to the prime minister and has now been given charge of the National Investigation Agency as a ‘reward’. With Gujarat police officer Rakesh Asthana as special director, Y.C. Modi’s tactic of burdening the case with additional witnesses – some of whom are not even likely to assist the prosecution’s case – will ensure the case goes on indefinitely, unless the Supreme Court intervenes again to put an end to this charade.

The BJP’s hope, of course, is that a resolution of the title suit in favour of the ‘Ramjanmabhoomi’ camp – or forced mediation where the full might of the state is ranged against the Muslim side – will render the demolition case infructuous or at least rob the party of any political stigma when its leaders are eventually convicted. With nothing tangible to offer voters by way of delivery on their election promises, Narendra Modi and Amit Shah would like to hold the Ayodhya card in reserve as a means of polarising the electorate on communal lines. Certainly, the statements and actions of Uttar Pradesh chief minister Adityanath on Ayodhya indicate the party is working to a plan. 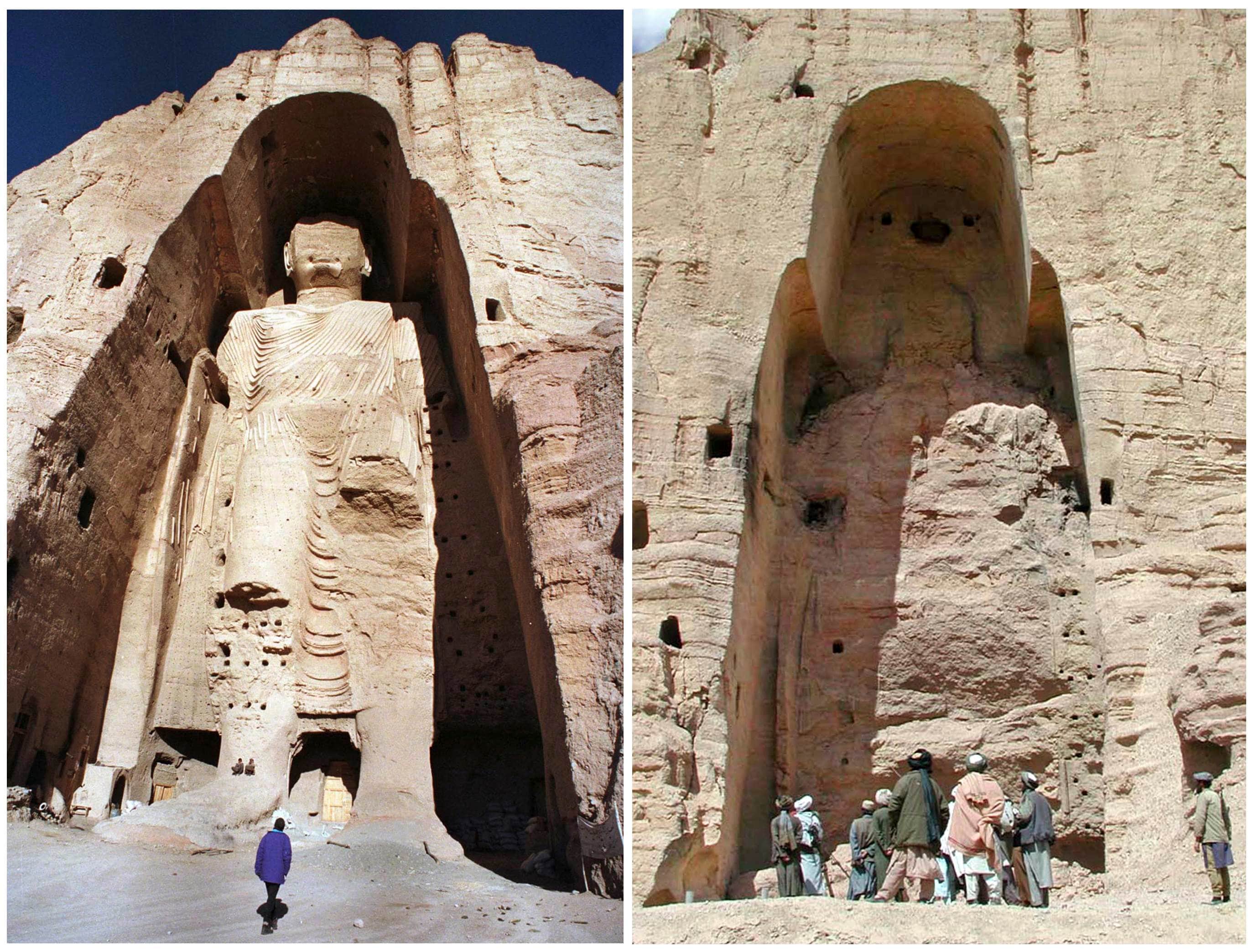 One of the Bamiyan Buddhas, before and after their destruction by the Taliban. Credit: Reuters

In the Islamic Republic of Afghanistan, the country with no Buddhists, public and official sentiment favours the rebuilding of the Buddhas. However, in the secular republic of India – a country with 170 million Muslims – the rebuilding of the Babri Masjid is not even on anyone’s agenda. So shameful is the political discourse now that other parts of the country’s Islamicate heritage – including the Taj Mahal – are being targeted by BJP leaders.

So what remains to be retrieved from the rubble that the mosque was reduced to 25 years ago? The architects of the crime have prospered and are today in power. Their pursuit of a Hindu vote-bank remains as determined as ever. Their demonisation of Muslims continues, as does their disregard for the fundamental rights of citizens. The institutions of the state which refused to take a stand in the face of majoritarian violence then – the police, paramilitaries, the bureaucracy and the courts – appear today even less likely to act as a check. How then will this chapter of shame come to a close? When the citizens whom politicians have convinced to think of themselves as Hindus go back to taking pride in being Indians again. When they act to reclaim their republic and its ideals of justice, liberty, equality – and fraternity – from the clutches of parivars and dynasties.