Besides Gender Justice, Triple Talaq Case Was Also About Separating Religion and State in Family Law

Marriage must now conclusively be held to be a secular institution, governed by civil law that confers equal rights on men and women within a marriage.

Muslim women hold placards in support of the All India Muslim Personal Law Board during a signature campaign in Ahmedabad (left), Supreme Court of India. Credit: Reuters, PTI 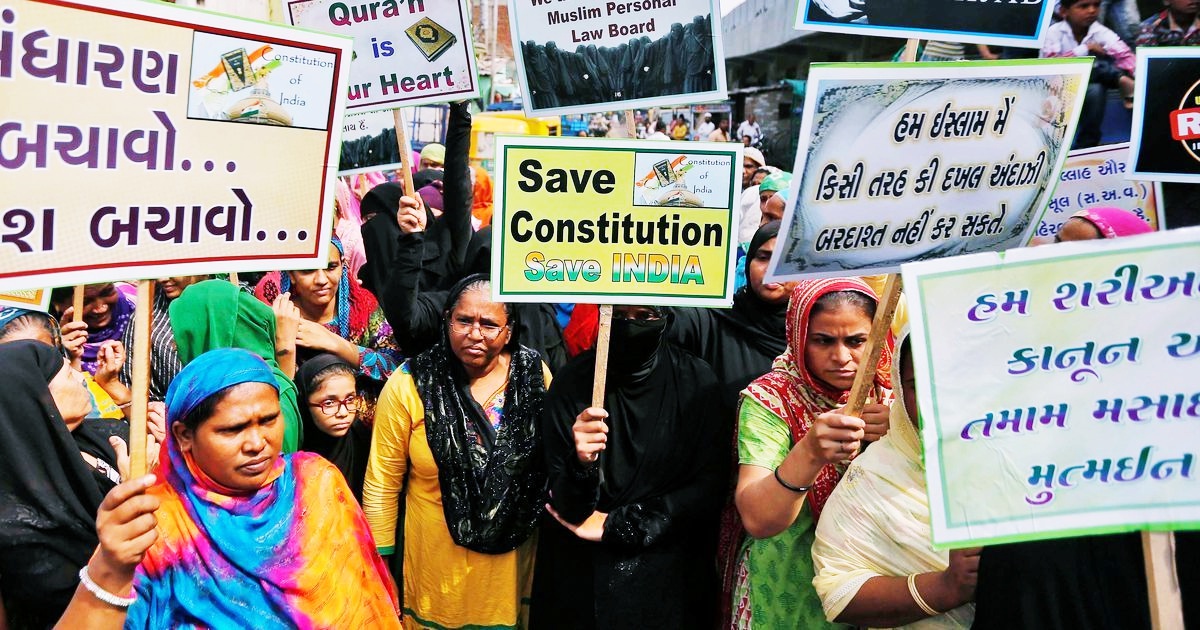 Muslim women hold placards in support of the All India Muslim Personal Law Board during a signature campaign in Ahmedabad. Credit: Reuters

“Marriage in Islam is a contract, and like other contracts, may under certain circumstances, be terminated. There is something astonishingly modern about this – no public declaration is a condition precedent to the validity of a Muslim marriage nor is any religious ceremony deemed absolutely essential, though they are usually carried out.”

These are the words of Justice Rohinton Nariman and Justice Uday Lalit in the triple talaq case. It is an example of what Oliver Wendell Holmes called the “inarticulate major premise” of the judgment. Every judgment endorses and strengthens certain values, and undermines and delegitimises others. Even though the judges may not spell it out, one reads between the lines of every judgment. In this case, the judges have founded their judgment on the search for modernity in marriage laws.

Modernity requires individuation and respect for the autonomy of individuals, the recognition of agency in all human beings, the ability to take decisions for themselves.

A failure to separate the realm of the secular from that of the religious has led to disastrous consequences in all spheres of life in this country. The expression “religious laws” is an oxymoron, for what is law cannot be religion and what is religion cannot be law. Religion, as we all acknowledge, is a matter of faith, not a matter of  law. What the constitution protects is the freedom of conscience and the right freely to practice and propagate religion.

Article 25 of the constitution, freedom of conscience and free profession, practice and propagation of religion, states:

(1) Subject to public order, morality and health and to the other provisions of this Part, all persons are equally entitled to freedom of conscience and the right freely to profess, practise and propagate religion

(a) regulating or restricting any economic, financial, political or other secular activity which may be associated with religious practice;

For too long it has been of assumed that family law is “ religious law” and is hence protected by Article 25. The irony is that the modernity of the Muslim law of marriage lies in its secular dimensions – namely that marriage is a contract freely entered into between two consenting adults. It is ironic that the All India Muslim Personal Law Board now suggests that marriage laws are protected by Article 25.

All marriages are a contract between two consenting adults, taking them out of the realm of the religious and making marriage a secular social institution with rights and liabilities assigned by law. It can hardly be suggested that a Hindu marriage is a forced one ­– solemnised without the consent of one of the parties to the marriage. All rights and liabilities that are recognised by a secular state and enforced as such are assigned by law and not by religion. A secular state does not enforce religion; it only protects religious beliefs and practices. In contrast, an Islamic state or a Hindu rashtra would enforce religion. It is for this reason that we do not have Sharia courts or Hindu courts in India.

Also read: Beyond Triple Talaq, India Needs a Debate on How to Reform Muslim, Hindu Law

What was at stake in the triple talaq case was not just gender justice but also the separation of state from religion in the realm of family law.

The chief justice of India, who authored the minority judgment, failed to separate state from religion when he elevated personal laws to the status of a fundamental right. What is more, he failed to understand that personal laws have no existence independent of the subject matter they govern. In this case, since they govern matters of family law, they are family law, nothing more, nothing less. This failure leads him to conclude that personal laws are part of the right to freedom of religion, a dangerous proposition by any reckoning.

In contrast, Justice Nairman and Justice Lalit hold that triple talaq is “manifestly arbitrary” and violates the right to equality guaranteed by Article 14. The enormity of this ruling lies in the fact that they recognise that family law is not part of religion at all, hence the question of protection does not arise. It must be subject to the discipline of fundamental rights.

This brings us back to the issue of modernity. Marriage must now conclusively be held to be a secular institution, governed by civil law that confers equal rights on men and women within a marriage. Whether to marry in a church, temple, court or anywhere else is a matter of choice, but that cannot determine the content of the marriage or its legal character, which will remain governed by state-made law.

It is that state-made modern law that we seek for all women when we talk of a gender-just code, not a uniform religious code. A vision of such a law would make marriage a contract freely entered into between two persons out of love and affection, which can nevertheless be terminated in a civilised manner. Such a law would have a provision for the just division of property, which recognises the investment made by a woman of her labour, her time and her emotions in the marriage, and distributes the assets accumulated during the marriage equally between spouses on a breakdown of the relationship. Such a law would not turn out women of all faiths, as it does now, with empty hands when a marriage breaks down.

Indira Jaising is a senior advocate at Lawyers Collective.