Videos uploaded to social media showed members of Hindutva organisations chanting slogans, some of which appeared to insult Islam, outside various movie theatres. 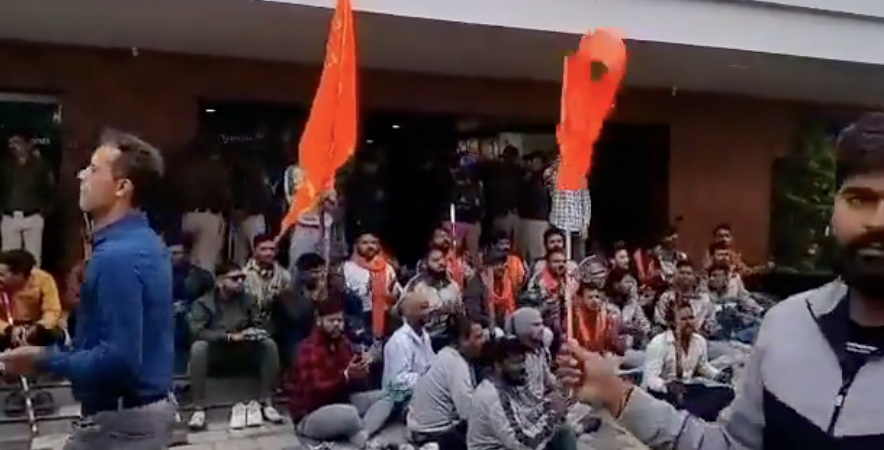 Videos uploaded to social media showed members of Hindutva organisations chanting slogans, some of which appeared to insult the Muslim Prophet, Mohammed.

Protests against Pathaan had begun much before the film’s release, with Hindutva groups leading a concerted campaign against it, on social media and through protests involving vandalism, citing the fact that an actor in it, Deepika Padukone, appears in a song in a saffron bikini.

Journalist Kashif Kakvi has tweeted videos, purportedly from Indore, Gwalior and Bhopal – cities in Madhya Pradesh. In Indore, the Hindu Jagran Manch appears to have led a round of devotional songs outside the INOX film theatre. The Bajrang Dal demonstrated outside a mall in Gwalior.

Madhya Pradesh home minister Narottam Mishra had said in December that the costume worn by Padukone was “highly objectionable” and that if the scenes are not “corrected” then the film may not be allowed to be released in the state.

Posters of the film displayed in Bhopal were torn amidst cries of ‘Jai Shri Ram’, a video tweeted by Kakvi showed. Viewers were allegedly turned away.

In Madhya Pradesh, these people of Bajrang Dal protesting against the film #Pathan are using "insulting words" for the "adorable" Prophet Muhammad of the Muslim community. Are the people of Hindu society making these people lead their religion? pic.twitter.com/oGq0TVg47a

Indore Commissioner of Police Harinarayanachari Mishra said an FIR will be lodged on “objectionable slogans” raised by Bajrang Dal workers at the Kasturi Cineplex. It is not yet clear if the above incident is the one he meant.

The news agency PTI quoted Assistant Commissioner of Police Dishesh Agrawal as having said that protests by Hindu Jagran Manch and Bajrang Dal led to some morning shows being cancelled in Madhya Pradesh.

In Agra, the Akhil Bharat Hindu Mahasabha, who had earlier issued an ultimatum against screening Pathaan, congregated at the Meher cinema hall and threw ink on a poster on January 24. An FIR was registered against some unidentified people, Hindustan Times reported.

The Gujarat unit of the Vishwa Hindu Parishad, meanwhile, withdrew its protest against the film, expressing satisfaction over the removal of “objectionable” contents from the film on the Central Board of Film Certification’s direction, Indian Express has reported.

Odisha TV has reported that in Bhubaneswar, activists of the Kalinga Sena staged demonstrations in front of several movie theatres, tore Pathaan posters and urged people not to watch the film.

On January 22, a day after he refused to comment on violent protests against the film in Assam’s Narengi, Assam chief minister Himanta Biswa Sarma had said that he had assured Shah Rukh Khan of peace during the run of his film.