'There Will Be More Communalisation and Polarisation of Assam's Political Life': Akhil Gogoi

In conversation with The Wire, Akhil Gogoi talks about the Assam elections, student politics, the accusation of being a Maoist and more 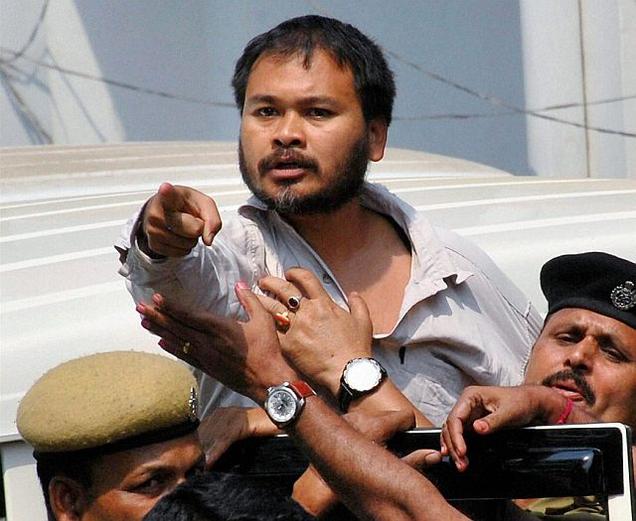 In conversation with The Wire, Akhil Gogoi talks about the Assam elections, student politics, the accusation of being a Maoist and more Guwahati: Akhil Gogoi, the 40-year-old Assamese peasant leader, formed the Krishak Mukti Sangram Samiti (KMSS) in 2005. His political struggle has mostly been directed against the building of dams, land mafias and corruption in public life.

In 2012, he teamed up with Anna Hazare in Delhi. Hazare backed his party’s aggressive blockading of dam-building equipment on the highways of Assam’s Dhemaji and Lakhimpur areas, meant for the construction of the Subansiri Lower Dam worth Rs 60 billion (in a 2002 estimate). The Congress government accused him of being a ‘Maoist’. He denied the accusations, telling India Today that KMSS respected the ideology of Mao Zedong but didn’t believe there were such a thing as ‘Maoism’.

Times of India cited him as the ‘chief of anti-BJP organisation, KMSS’ when he controversially said the party was trying to ‘do a Kashmir in Assam’ by teaming up with AIUDF in the northeastern state, like it has with PDP in Kashmir.

He has consistently spurned electoral games and this year, too, has refused to contest the upcoming state assembly polls because he does not believe that merely winning will bring fundamental changes to the lives of people.

He seems like a maverick, but sticks to his guns in a state where politicians of every hue switch or trade loyalties and ideological positions are directed by psephologists’ calculations. Excerpts:

How do you think Assam will change after these state elections?

There will be more communalisation and polarisation of Assam’s political life. Mafias and the rule of syndicate groups will be the order of the day. Social fabric based on the ethos of multiculturalism, the hallmark of the Assamese society, will break down. The Amit Shah model of governance will be the new hallmark. The power of capital/money will be aggressive. For instance, our national highways will be fully toll operated. The class of traders-businessmen will be more important in Assam’s everyday life.

In your history as a politician, what was the most important learning phase for you? Can one assume it was the period you decided to form KMSS?

The experience of neo-liberal India after the 1991 reforms on Assam has become fast visible. Assam is constantly on the warpath against the aggression of neo-liberal capital against her natural resources in the form of dam building. We see more instances of land and water grabbing along with price rise. The experience of the people of Assam against this new onslaught of capital is our learning experience.

The Left movement is weak in India. There is some form of Left-led trade unionism in Assam. The general people, farmers and others are far away from Left politics. This is despite a rich history of Left mobilisation. The example of Assam is a reflection of this.

Do you think after three terms in government Tarun Gogoi should continue to govern the state of Assam?

Tarun Gogoi should not come back. But at the same time, the Himanta Biswa Sarma led-BJP is worse in terms of its political culture and agenda. Himanta B. Sarma should not replace Tarun Gogoi.

But Sarbananda Sonowal is the official CM candidate of the BJP.

I referred to Sarma because HBS is the key figure the within the BJP and his latent ambition to become chief minister of Assam is known to everyone.

What are your views on Hyderabad student Rohith Vemula’s suicide?

The BJP-RSS is always anti-Dalit, poor and a supporter of orthodoxy.

There were newspaper reports that Kanhaiya Kumar was to campaign for the Left parties in Assam  but what are your views on the student leader?

He is surely a new icon of aspiration for the poor. But it will take time for him to establish himself as solid political worker. His oration needs to be connected to actual hard work.

A debate was sparked after the JNU arrests which raised questions about whether nationalism and patriotism are the same thing – what according to you is the difference (or similarity) between the two? How do these concepts translate to Assam, as there are so many nationalisms here?

What is your advice for rising student leaders?

The new student leaders should speak more for the poor. Students leaders from the Congress-BJP are basically stepping stones for becoming MLAs and MPs in future.

Why are you not fighting these upcoming assembly elections?

Winning elections may not bring fundamental change into the lives of people. There are different ways of changing the lives of people. We believe in changing the system. These debates are never-ending. The Kejriwal government is a result of these debates. When one should capture power, it will be decided by the specific historical context but at the same time power capture is not the sole intention.

Why did the Congress accuse you of being a Maoist? Why do they underestimate you?

When you fight for the rights of tribals, dalits and the landless, you are not expected to be the blue-eyed boy of the government. The Congress hates us because we have relentlessly fought on the behalf of the poor on issues of water, land and forest rights. If KMSS is appreciated by the mainstream parties, we will be surprised!

What do you think of Tarun Gogoi raking up the issue of the secret killings of ULFA’s kin while AGP was in power, and directly accusing the BJP’s CM candidate, Sarbananda Sonowal, of involvement in the murder of student leader Saurav Bora in 1986?

Secret killing is a truth. But no one is serious enough to punish the guilty. It is an election gimmick.

What do you think about Tarun Gogoi saying that the AGP and other regional parties have lost their regional character by tying up with the BJP, and ‘selling out’?

Assamese nationalists who are also ‘regionalist’ are very weak in terms of their economic and political outlook. They are dependent on other forces for their survival and sustenance. Often their parasitical temperament becomes very visible. They are a classic case of comprador class. This class can become communal nationalists quickly. This has happened during this election.

Do you think undocumented migration would be less of a problem if Assam were less agrarian and more industrialised?

That immigration took place/takes place is true. But whether industrialisation can resolve this crisis or not is too early speculate. Because who will be the industrialists: that is also a fundamental question. It is not simply a question of creating a labour market.

Note: The interview was edited on March 29 to include a question on Akhil Gogoi’s reference to Himanta Biswa Sarma as a chief ministerial contender.