There Should Be No Doubt That Ram Temple Will Be Built in Ayodhya: Adityanath

Suggesting that there was some sort of conspiracy at play to stop the temple's construction, Adityanath asked the crowd to be patient for "some more time." 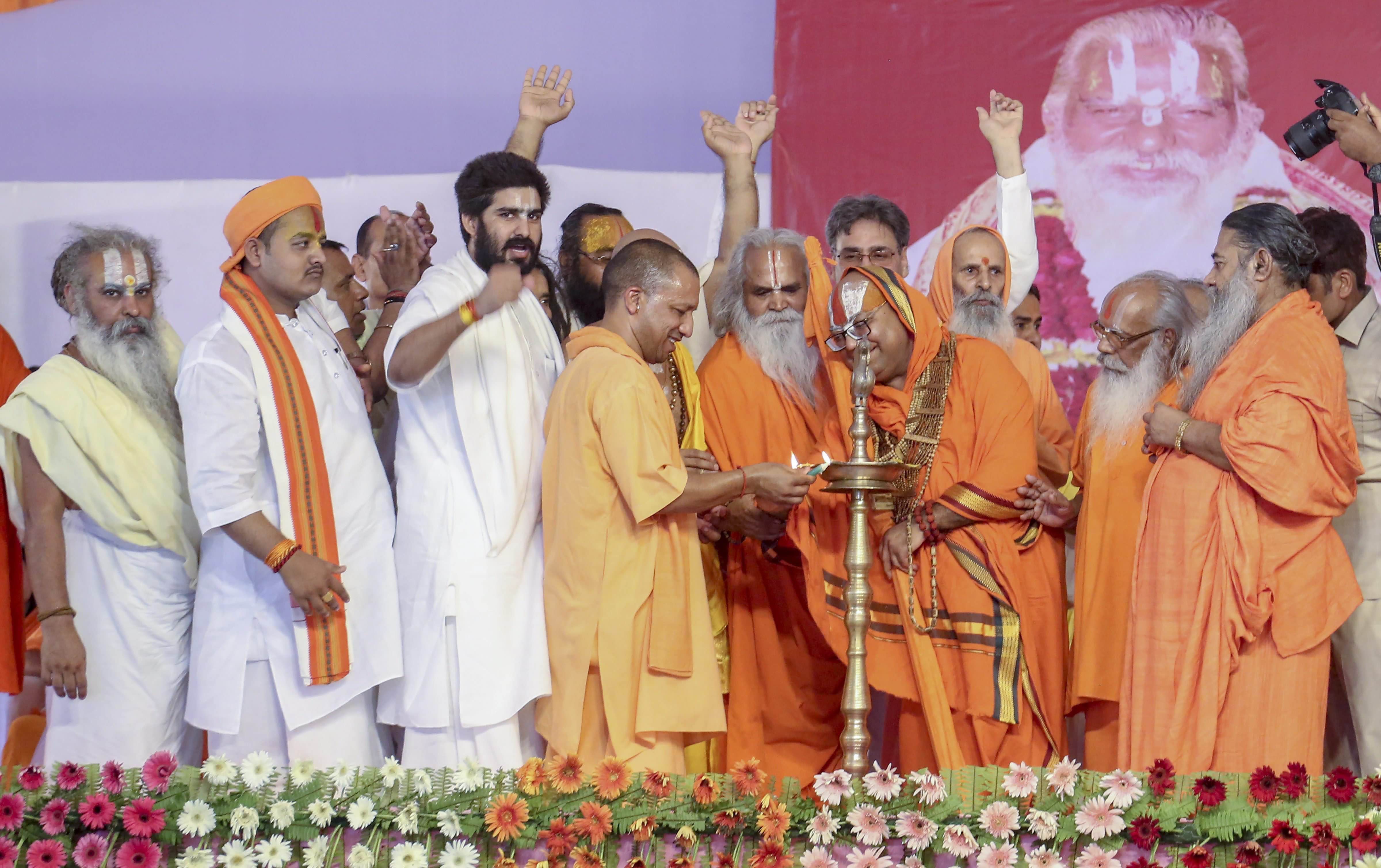 New Delhi: Uttar Pradesh chief minister and Bharatiya Janata Party leader Adityanath said on Monday that “there should be no doubt” that a Ram temple will be built in Ayodhya on the disputed Ram Janmabhoomi-Babri Masjid land.

Speaking at a ‘Sant Sammelan’ in Ayodhya, Adityanath said, according to Indian Express, “Maryada Purushotam Ram iss brahmand ke swami hain. Swabhavik roop se Ayodhya mein jab prabhu Ram ki kripa hogi toh Ayodhya mein bhagwan Ram ka bhavya mandir banke hi rahega… ismein koi sandeh hona hi nahin chahiye (Lord Ram is the master of this universe. It is obvious that when Ayodhya has his blessings, the Ram temple would be built in Ayodhya… there should be no doubt about this).”

Before Adityanath, another speaker at the event, Ram Vilas Vedanti, a member of the Ram Janmabhoomi Nyas, said that they will not be waiting for a court order before starting construction on the temple. Vedanti even invoked the Babri Masjid demolition to prove his point. “Just like everything happened then without court orders… before the 2019 elections, the construction of the temple would start in Ayodhya, I assure you,” he said.

Suggesting that there was some sort of conspiracy at play to stop the temple’s construction, Adityanath asked the crowd to be patient for “some more time.” “On one hand, they file an application in court to ensure that the hearing does not take place before 2019. On the other hand, they talk of BJP not doing anything in the direction. Ultimately, whether it’s the BJP or any government, efforts will be made to find a solution in a constitutional way.”

While this is the first time in a while the UP chief minister has raised Ram temple matter so directly and linked it to the 2019 general elections, members of the Sangh parivar have made sure that noise around the sub-judice issue continues. In March this year, the Adityanath government said that it wants to tap in to India Inc.’s corporate social responsibility funds to build a 100-metre tall statue of Ram in Ayodhya, on the banks of the Saryu river. The statue, the government said, would bring about ‘social development’.

In November 2017, days before the Supreme Court was to begin it final hearing in the matter, RSS chief Mohan Bhagwat said, “On the Ram Janmabhoomi, the Ram Mandir alone will be built. Nothing else will be built. It will be built in the same form with the same stones and will be built by the same people who fought for it 20 to 25 years ago.”

Meanwhile, the Vishwa Hindu Parishad has been preparing for the construction in much more tangible ways – by transporting truckloads of stones meant for the temple to the town. “Today, two truckloads of stones to be used in the construction of the Ram mandir have arrived from Bharatpur, Rajasthan. We need more than 100 truckloads to give final shape to the proposed Ram temple, which we are trying to import within the next couple of days,” VHP leader Triloki Nath Pandey told The Wire in September 2017.

The Supreme Court has said that it is treating the Babri Masjid-Ram Janmabhoomi case as a land dispute, and will not be allowing any third-party intervention. The bench made this declaration after a lawyer tried to intervene in the matter, saying that it involved the faith of crores of Hindus. The apex court is hearing as many as 14 appeals to the Allahabad high court judgment which came on September 30, 2010. The high court had ordered a three-way division of the disputed 2.77 acres of the Babri Masjid-Ram Janmabhoomi site, assigning a third each to the Nirmohi Akhara sect, the Sunni Central Wakf Board of UP, and Ramlalla Virajman, the idol of the child Ram placed at the site.