The Pink Revolution is Marching On 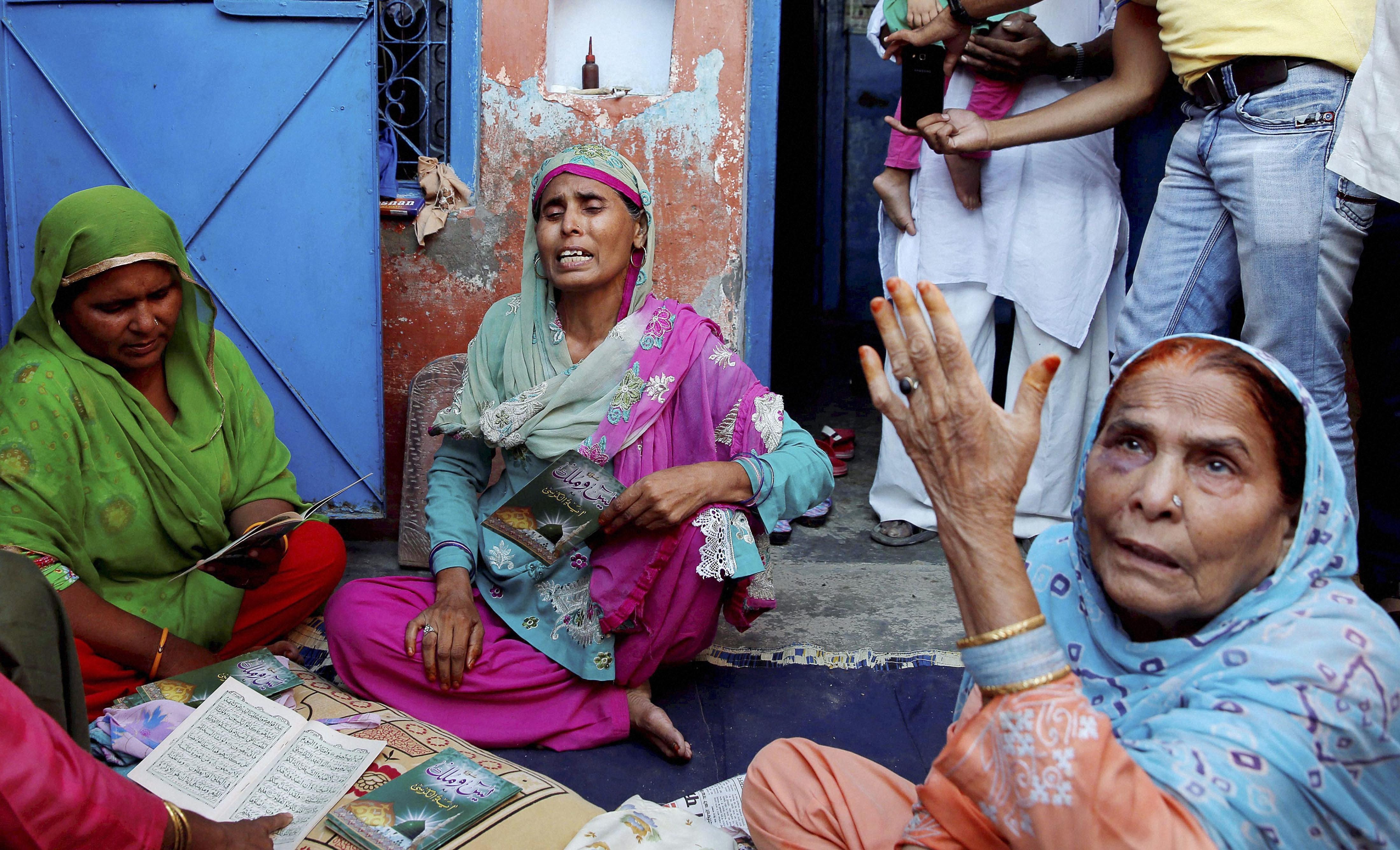 Relatives mourn the death of farmer Mohammad Akhlaq at his home in Bisara village in Dadri, Uttar Pradesh, about 45 kilometers from New Delhi on Wednesday. Villagers beat Akhlaq to death and severely injured his son upon hearing rumours that the family was eating beef. Credit: PTI

If Narendra Modi last year conjured up the spectre of a ‘pink revolution’ – cow killing on a mass scale – in the event of the BJP’s defeat in the 2014 election, what metaphor will he use to describe the murder of a Muslim father at Dadri on the outskirts of Delhi for the imaginary crime of keeping beef in his home? Were he to call the ugly incident by its proper name – a lynching – he would have to cross an ideological line that he and his party have helped place at the centre-stage of Indian politics over the past year and a half: That the slaughter of cows poses a more serious threat to the country than the slaughter of human beings in the name of cow protection.

The Prime Minister owes it to the people of this country to say it isn’t so. To declare loudly and clearly that even if that piece of meat which the Uttar Pradesh police have now mischievously taken away for ‘forensic’ analysis turns out to have come from a cow, the mob had no right to invade the home of Mohammed Akhlaq and murder him.

Modi has a responsibility to speak out this time because the violence that occurred on Monday night is a direct product of the hysteria which is being deliberately engineered in different parts of the country over the issue of cow slaughter – an issue he brought up repeatedly in stump speeches during the 2014 general election.

In an attempt to better understand the politics behind the campaign, I went back and listened to some of those speeches. Both in western Uttar Pradesh – not far from Dadri – and again in Bihar, Modi spoke at length about the dangers of “pink revolution”.

The speeches are amazing for the ease with which Modi slides between fact and fiction, using the words ‘pashu’ and ‘gai’ and even ‘mutton’ interchangeably to paint a picture of Indian villages being emptied out of their cows as the Congress government in Delhi – in pursuit of ‘vote bank politics’ – is hell-bent on promoting a ‘pink revolution’ or ‘gulabi kranti’.

“The agenda of the Congress is Pink Revolution,” he said. “We have heard of the Green Revolution and White Revolution but never pink and this means the slaughter of animals (pashu). You see, the colour of mutton is pink, and they are committing the sin of exporting it and bringing revolution… Because of this, our animal wealth is being slaughtered, our cows are being slaughtered, or sent abroad to be slaughtered… And now the Congress is saying, ‘If you vote for us, we will give you permission to kill cows’.”

In his Bihar speech, Modi asks how the leaders of the ‘Yaduvansh’ – the Yadavs – like Mulayam Singh and Lalu Prasad can ally with the Congress. “I want to ask [them], how can you support such people who want to bring pink revolution? When a pashu is cut, the colour of its meat is called pink revolution… In village after village, animal wealth (pashu dhan) is being slaughtered, pashu are being stolen and taken to Bangladesh, big slaughter houses have been opened across the country… The Congress won’t give subsidies to a farmer or to a Yadav who wants to tend his cows. But if someone opens a slaughter house to kill cows, kill pashu, then the [Congress] government gives them a subsidy.”

Leaving aside the hypocrisy involved in the Modi government presiding over a huge increase in ‘carabeef’ (buffalo meat) exports, the BJP – since coming to power at the Centre, and in states like Mahararashtra and Haryana – has moved to impose its dietary preferences on people at large. WATCH WHAT YOU EAT: The remains of the Akhlaq family’s fridge after a mob attacked the house. Credit: PTI

Where earlier, farmers were allowed to sell bulls and even cows above a certain age to slaughter houses, the law in these two states now compels them to bear the burden of maintaining these animals for the rest of their natural lives. Maharashtra has also made the possession of beef – regardless of whether it is from outside the state or from abroad – a criminal offence. The Devendra Fadnavis government, along with several other BJP-ruled states recently imposed a limited duration ban on the sale of mutton and chicken during the Jain festival of Paryushan. The Union Culture Minister, Mahesh Sharma, has publicly advocated a nine-day national meat ban during the navaratras. In Jammu and Kashmir, the RSS is pushing to ensure that a colonial-era ban on beef be strictly enforced across the state.

In response to the meat ban, the journalist Vir Sanghvi joked that if you vote for the Gujarat model, you get the Gujarat diet too. But the Dadri incident tells us the politics of food is no laughing matter anymore.

In any democratic society governed by the rule of law, there would still be space to have a debate on the citizen’s right to make her or his own dietary choices without interference from the state. After Dadri, it is clear that that argument is over.

Make no mistake – that is how far our political goalposts and moral compasses have moved in the past 16 months.We have gone past the stage where we can expect political parties and the courts to defend the right of a citizen to eat what she or he likes. The issue at stake now is a family’s right to not be attacked and killed because of the food they eat, or would like to eat – or are suspected of eating.