Protests Against Tanishq Are Not About the Ad, but Something Much More Sinister

All this talk about the so-called "love jihad" is just a façade. The fact is that those who opposed the ad really do not want any relations at all between the Hindu and Muslim communities. 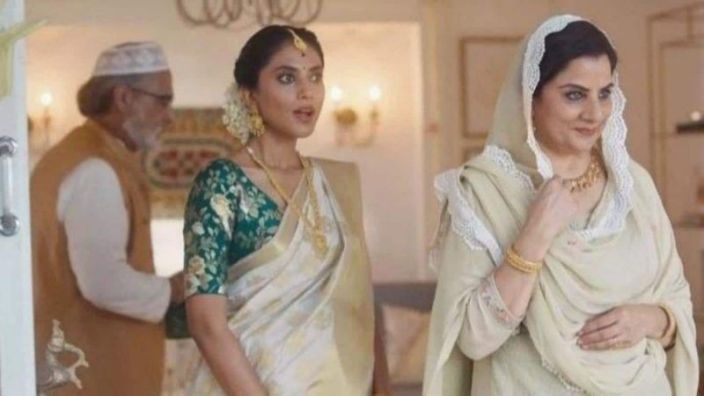 A screengrab from the Tanishq ad.

The jewellery brand Tanishq, owned by the Tata group, had recently launched an advertisement, which features apparently a Hindu daughter-in-law of a Muslim family. It depicts a ceremony similar to a baby shower. The daughter-in-law points out to her mother-in-law that the ritual is not followed in her family. Gifting her jewellery, the doting mother-in-law replies that the ceremony is to keep her happy, treating her as a daughter instead of a daughter-in-law.

Delicate, laudable sentiments! However, in India of a few years ago, except for those who can afford to purchase jewellery for all such occasions, nobody would have bothered to give the ad a second look.

Yet, in eloquent testimony to the venom that has permeated the very lifeblood of India’s body politic, a vicious online attack was launched on the social media against the company and the ad. Eventually, succumbing to the pressure, the company withdrew the ad. Criticism is every citizen’s right, but the implications of this particular criticism are far more serious.

Apparently, those criticising the ad could not tolerate the “sacrilege” or “blasphemy” of a Hindu daughter-in-law in a Muslim family. Once again, it is their right to feel so. However, they alleged that the ad promoted what they called “love jihad”, something, which is not only fictional and imaginary, it is potentially capable of inciting communal hatred too.

That the daughter-in-law in the ad is both surprised and deeply moved by the gesture of the ritual was described as “apologetically expressing her gratitude to her in-laws for the acceptance of her faith“. This may be a matter of interpretation, but then, the fact of the company buckling under pressure and withdrawing the ad was projected as a sort of “victory” of “united Hindus”, whatever that means.

The critics have every right to boycott Tanishq or any other product for that matter, for any reason, rational or irrational. It is reported that Titan, which owns the brand Tanishq, saw its share price fall 2.58 % the day after #BoycottTanishq had trended on social media. That is a business risk, which the company must take and there cannot be any reason to complain.

From the legal point of view, the company too had the right to withdraw the ad and they were not obliged to give any explanation to anybody even if their abrupt withdrawal projected them in very poor light.

But they unnecessarily complicated matters by using the words “inadvertent stirring of emotions” and “hurt sentiments” in their contrived explanation. They also spoke of “well-being of our employees, partners and store staff”. Clearly, they were apprehensive of attacks on their stores. It does not matter whether any attacks took place or not.

This Freudian slip permits us to peep into some very ugly reality staring in the face of Indian society.

Where and how the criticism falters

First up, there is no illegality in a Hindu girl having been married into a Muslim household. It is such an established fact that it needs no comment.

I refuse to bite the bait of the so-called “love jihad”, because, as admitted by the government itself, there is nothing called “love jihad”. To comment on their narrative would amount to this fictional concept a degree of legitimacy.

There is an attempt to justify the protests, reminding the readers of the protests over the film Bombay (1995) and those over Gadar: Ek Prem Katha (2001). But those disputes too were wrong, and nor can that wrong cannot be used to justify this wrong.

Some are also questioning the timing of the ad, particularly in the backdrop of a recent murder of a youth in Delhi, allegedly over an inter-faith love affair. This is ridiculous. The ad was released for the coming festival season, at a time when jewellery makers want to reach out to consumers. The killing has nothing to do with it.

Some people have talked about the issue of reciprocity. Challenges are floating on social media that if any company has courage or pretensions to be secular, let them make an ad showing a Muslim girl married into a Hindu family. This too is ridiculous.

Love marriages are spontaneous affairs that happen because of “free will” of those concerned. There is no law which dictates that if X number of marriages of Hindu girls with Muslim boys take place in a year, there ought to be necessarily the same number of Muslim girls married with Hindu boys.

‘Love jihad’ is just a façade

Reacting vehemently to a fictional depiction of a Hindu girl having been married into a Muslim family is not just intolerance, it is something much more sinister.

Let us face it. All this talk about the so-called “love jihad”, suggestive of an anti-national conspiracy, is just a façade, a clever design to conceal their real motives. The fact is that those who opposed the ad really do not want any relations at all between the two communities.

This kind of bigoted people do not seem to tolerate the very existence of Muslims anymore. Given a chance, they would like the Muslims to vanish out of mind and out of sight, the narratives of marginalisation and social exclusion paling before it. They would want them to become invisible.

This is acutely reminiscent of the situation depicted in the novel Invisible Man by Ralph Ellison. Widely hailed as one of the greatest novels of African-American literature, the invisibility of the narrator in the novel is about the invisibility of identity—above all, what it means to be a black man in the USA—and its various guises, in terms of both personal experiences and the force of social illusions.  Something of that kind is happening here.

Maintenance of communal peace in the society under the threat of legal action is one thing; a wilful, happy acceptance of the diverse components of our society is quite another. Communal harmony, as we love to envisage, is dead for all practical purposes. Hatred has irretrievably cleaved the spine of our multiracial, multicultural society. Now, the best we can hope to do is to redeem our individual souls by relating to and loving “the others” at our individual levels. Let love not die within our hearts; society may be damned.