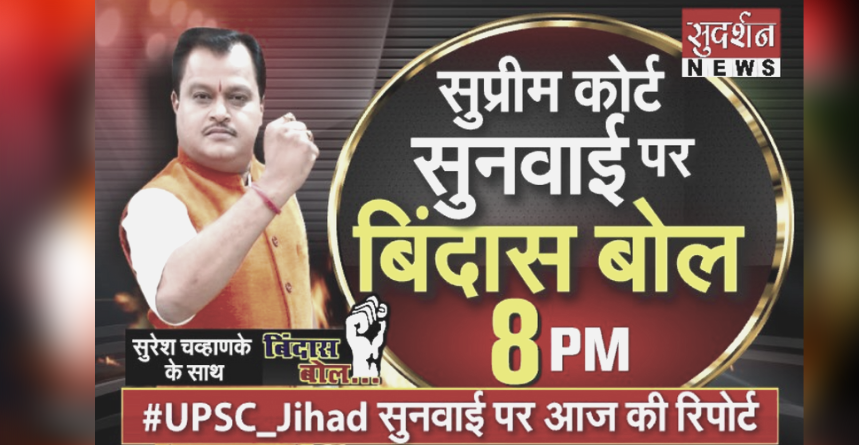 A promotional teaser of the UPSC Jihad programme on Sudarshan TV, focusing on the hearings. Photo: Twitter/@SudarshanNewsTV

The SC refused a pre-broadcast ban on the show. A bench headed by Justice D.Y. Chandrachud is now hearing a plea against the provocative show and on September 16, 2020, the top court temporarily restricted the channel from airing the remaining episodes. “The Supreme Court staying something is like a nuclear missile. But we had to step in because nobody was taking any action,” Justice Chandrachud said.

Chavhanke attempted to show that Muslim aspirants are favoured in the exam as the government offers them benefits to the disadvantage of Hindu candidates.

Chavhanke’s entire show was based on the premise that a greater number of Muslim aspirants are taking the UPSC exam, thus suggesting an organised ‘infiltration’ in Indian bureaucracy. The final result of 2019 UPSC exam was declared on August 4, 2020. Out of the 829 qualifying candidates, 42 were Muslims which is 5%. Only one Muslim candidate was in the top 100.

Data from the last five years collated from the UPSC website does not show a ‘sudden’ rise in Muslim qualifiers but the percentage varies between 3% to 5%. Since the recruitment number is not constant every year, the graph below shows the percentage of Muslim candidates out of the total number of qualifiers in 2015-2019. 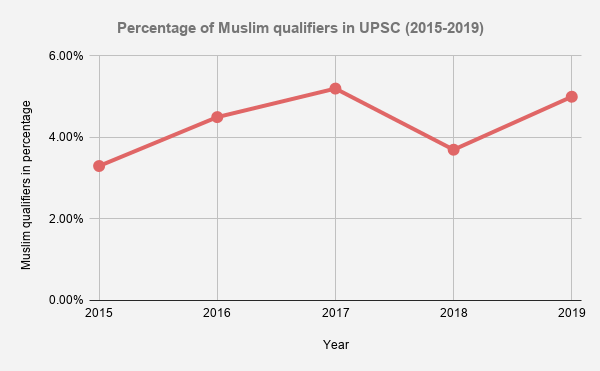 Therefore, only in 2017 a little over 5% Muslim candidates qualified in civil service examination. At about 20:15 minutes into the show, the channel conveniently skipped 2018 in its data which would’ve shown a decrease in Muslim qualifiers compared to the previous year. 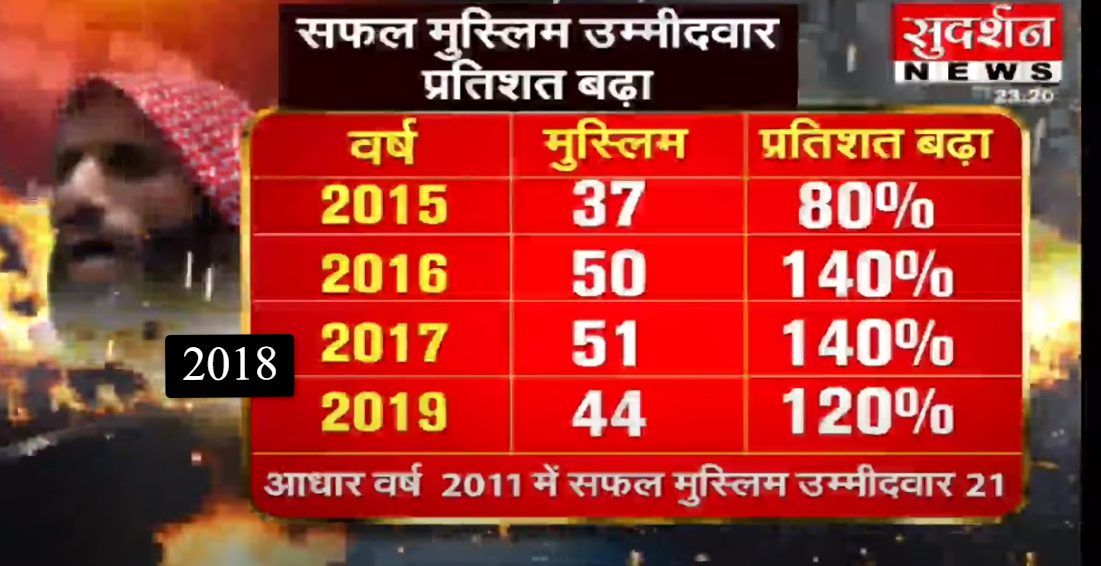 Picture 2: a claim made in the show about the increasing percentage of successful Muslim candidate in UPSC from 2015 till 2019.

Sudarshan News claimed that the age-limit for Hindu candidates is 32 and the same for OBC Muslims is 35. Picture 3: Relaxation in the age of Muslim candidate was raised by Suresh Chavhanke.

In a notification issued by the Union Public Service Commission on February 12, 2020, the lower age limit for all candidates is 21 years. Picture 4: notification issued by UPSC on the Age-limit to appear in the examination.

The age limit is also relaxed for other groups such as those in defence services, commissioned officers, people with disabilities, etc. The notification further states, “Candidates belonging to the Scheduled Castes and the Scheduled Tribes and the Other Backward Classes who are also covered under any other clauses of Rule 6(b) above [which provides upper-age limit relaxable for certain categories]” will be eligible for grant of cumulative age relaxation under both the categories.

Backward classes among Muslims are eligible for the upper age-limit relaxation granted to OBC. However, Muslims are not the only minorities in OBC which also includes Hindus. To suggest that Muslims solely reap the benefits of OBC quota is erroneous.

It is noteworthy that the community does not make the cut in the SC or ST category. Paragraph 3 of the Constitution (Scheduled Castes) Order, 1950 states, “Notwithstanding anything contained in paragraph 2, no person who professes a religion different from the Hindu [the Sikh or the Buddhist] religion shall be deemed to be a member of a Scheduled Caste.”

He made the observation after the National Council of Dalit Christians’ (NCDC) petitioned that religion should not be a consideration for the SC/ST status. Dalit Muslims and Dalit Christians, descendants of Hindu ‘untouchables’, have been demanding their inclusion in the SC category which continues to be opposed by Dalit Hindus.

Throughout the show, Sudarshan News compared general category Hindus with OBC Muslims misleading viewers that the latter is favoured in the exams. Four out of the six claims fact-checked in this report are based on the same premise. However, both Hindus and Muslims belong to general and OBC categories and the comparison cannot be across groups where every class of people is given the same benefits.

The channel also claimed that Muslims are given the advantage of more attempts to take the exam. Hindus can take the exam six times while Muslims get nine attempts, as per Sudarshan News. 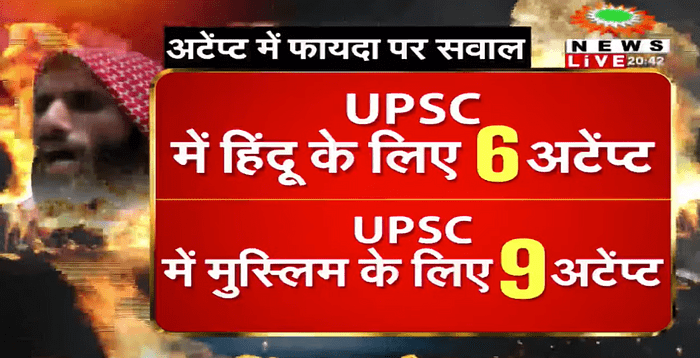 Picture 5: Comparison in the permitted number of attempts taken by Muslims and Hindus as per Sudarshan News.

The UPSC notification does not give a religion-based restriction on the number of attempts. It merely states that every candidate shall be permitted six attempts except persons belonging to OBC, SC and ST categories and those with disabilities will be given nine attempts. It is also noteworthy that the six-attempt rule is applicable to general category Muslims.

Picture 6: the notification of UPSC shows that it doesn’t permit religion-based attempt in the examination.

At about 45:30 minutes into the show, Chavhanke claimed that cut-off marks are also set lower for Muslims. He compared the minimum qualifying marks in 2009 (for reasons best known to him) for Muslims and Hindus as if no ‘non-Muslim’ belongs to the SC/ST and OBC category. 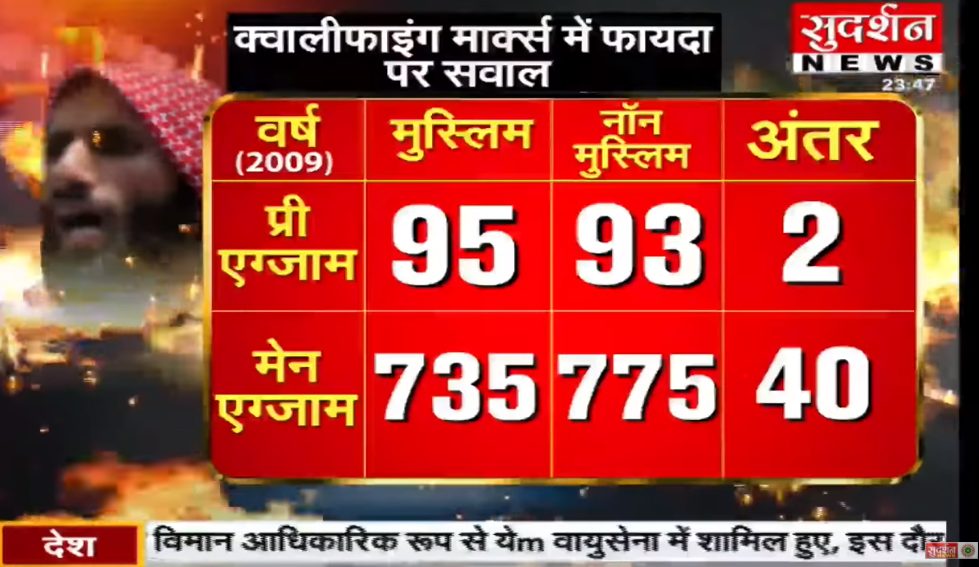 Picture 7: a claim made in the Sudarshan News that the cut-off marks are set lower for Muslims.

The UPSC releases cut-off marks for both prelims and mains every year. Below is the minimum qualifying standards/marks secured by the last recommended candidate in various categories in the Civil Services Examination 2019. Again, the cut-off marks are not based on religion but social and economic discrimination, i.e., for SC, ST and OBC groups.

Chavhanke then proceeded to describe another ‘favour’ given to Muslims. At 47 minutes, he said that former Prime Minister Manmohan Singh set up five coaching centres for UPSC exams “out of which, four were set up in Muslim universities.”

According to an article in The Print, the government had set up “five centres between 2009 and 2010 to provide underprivileged communities with free residential coaching for the civil services and other government exams.” At the heart of ‘UPSC Jihad’ controversy is the coaching centre in Delhi’s Jamia Millia Islamia. Chavhanke called the students from Jamia who cleared the UPSC exam “Jamia ke Jihadi”.

IPS officer Kavendra Singh Sagar, who serves as superintendent of police (SP) in Banswara, Rajasthan was a student at Jamia coaching centre in 2014. He told The Print that “underprivileged communities — not just Muslims, but also the Scheduled Tribes (STs), the Scheduled Castes (SCs) and women” study at the facility.

Furthermore, the Ministry of Social Justice and Empowerment provides free coaching services to SC and OBC students irrespective of religion. 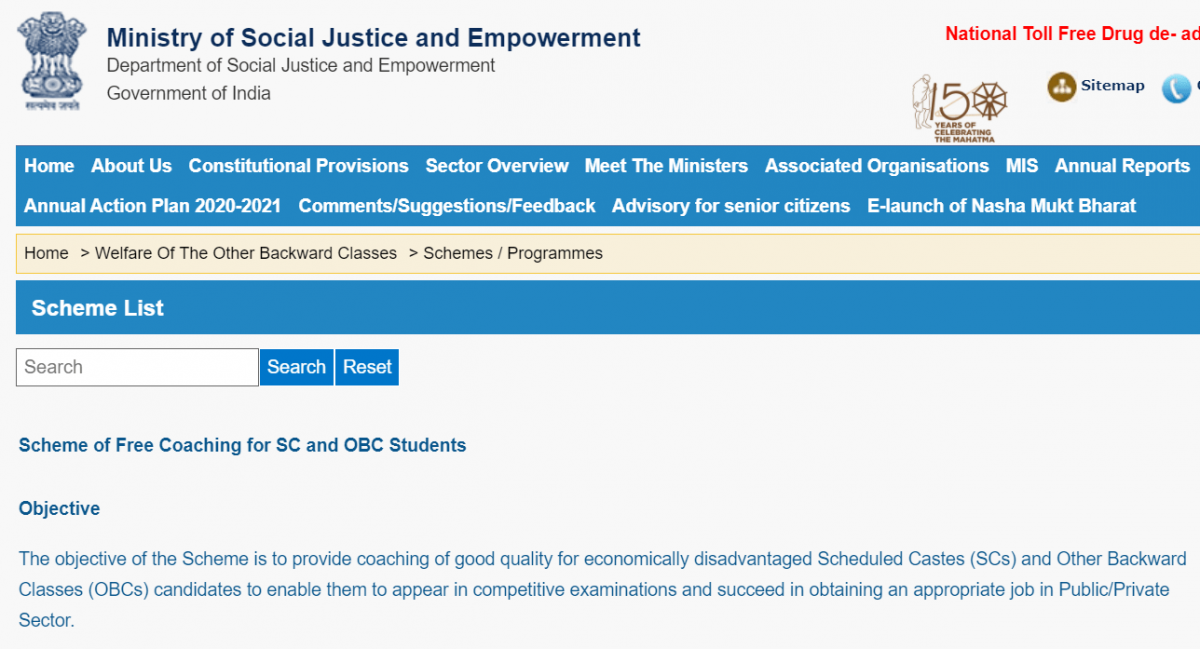 Picture 9: notification of the scheme for free coaching services to SC and OBC students irrespective of religion on the website of Ministry of Social Justice and Empowerment.

After the UPSC 2019 results were declared, Minister of State (Independent Charge) Minority Affairs Abbas Naqvi said that over 140 youth belonging to minority communities were selected. A PTI report quoted the minister saying that “inclusive empowerment” under the Modi government has “ensured that many from among the minorities are selected for top administrative posts.”

Sudarshan News also brought Zakat Foundation into the spotlight for coaching Muslim candidates but did not mention RSS-backed coaching institute, Samkalp Foundation, which claimed a 61 per cent success rate in this year’s exam, reported The Print. Zakat Foundation has filed a plea in the SC against the Sudarshan News program stating that the NGO has been providing and funding coaching not just for needy Muslim candidates, but for candidates from all faiths for eleven years. He played an interview clip where the interviewer can be heard telling the aspirant, “Your interview is not a normal interview. You should prepare yourself that your interview will not be conducted in a normal, average manner. The reasons for this is your age and religion.”

As soon as the clip stopped playing, Chavhanke screamed a question to his audience, “Why is it said that your interview will be special? Is it because you hail from a particular community? Is this related to the community getting more marks in the interview?”

The clip aired by the channel was uploaded by private IAS coaching centre Drishti IAS. The mock interview was conducted on Azharuddin Zahiruddin Quazi whose All India Rank (AIR) in UPSC 2019 was 315. The interviewer indeed made the statements aired by Sudarshan News, however, the channel played a clipped video. At 31 minutes, the interviewer added that very few Muslim candidates qualify for an interview. “We say this to almost everybody. This has both advantages and disadvantages.” He advised the aspirant to expect to be evaluated differently from others. The interviewer merely listed the challenges Quazi might face during his interview for his socio-economic background.

The one-hour long show piggy-backed on misinformation to make false assertions about the nature of civil service examinations in India. In the garb of ‘investigative journalism’, Chavhanke promoted discriminatory and provocative views targeting the Muslim community. The show was also criticised by the IPS Association which termed it “communal and irresponsible piece of journalism”.