“Officials and politicians visit our colony before any election. At times even threaten us to vote else we will be forced to vacate. After all these years we still have no home, we don’t belong anywhere.” 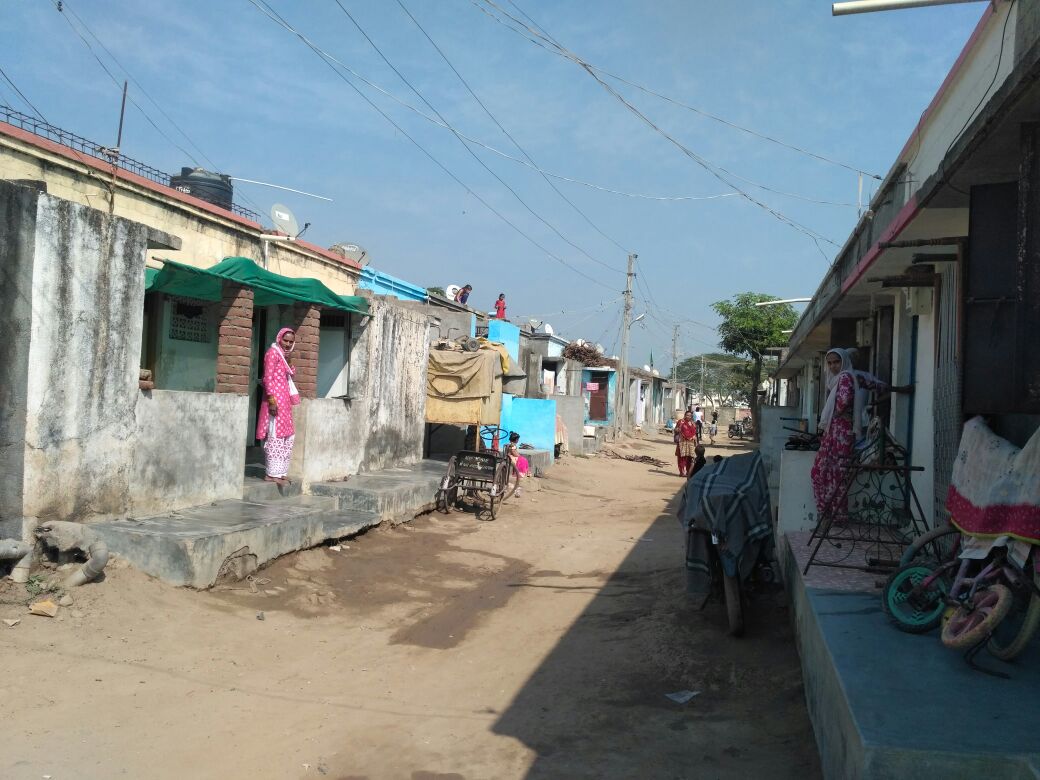 On March 16, 2002, Rahimbhai along with his family of seven, took refuge in a relief colony in Tankaria in Bharuch. Sixteen years later, the 12 feet by 20 feet room that was meant to be a temporary relief camp became his family’s permanent home.

The rehabilitation colony at Tankaria established by an NGO, Islamic Relief Committee (IRC), today is home to eight families who were affected in riots of 2002 and migrated from various areas in Vadodara, Kheda and Ahmedabad.

“I used to drive a private bus and own a meat shop. We fled from Makdarpura, Vadodara, where we had a house. A representative of IRC brought us here at Tankaria. We paid about Rs 2,000 for an electricity meter in 2002 from whatever money we could take with us while fleeing. But we got electricity connection only in 2005. We have no way of going back to where we were. My house was burnt and my meat shop has been taken over and is being run by someone else,” tells Rahimbhai, who now sells imitation jewellery to earn a living.

Struggling for 16 years to to get ownership rights, Rahimbhai says, “We want ownership of the house where we have been living for 16 years now. The children have grown up and are getting married, we cannot go on living in one room. We don’t have any documents that will make us eligible for a loan. We have no option but to live here. We have tried conveying this to the officials of IRC but they never met us in 16 years to discuss transferring the ownership rights.”

Currently there are over 3,000 families living in 83 relief colonies across Gujarat – 15 colonies in Ahmedabad, 17 in Anand, 13 in Sabarkantha, 11 in Panchmahal, eight in Mehsana, six in Vadodara, five in Aravalli and four each in Bharuch and Kheda districts. Most of the colonies have been built by four organisations – Jamait-e-Ulema-e-Hind, Gujarat Sarvajanik Relief Committee, Islamic Relief Committee, and United Economic Forum – besides some small trusts and local NGOs. 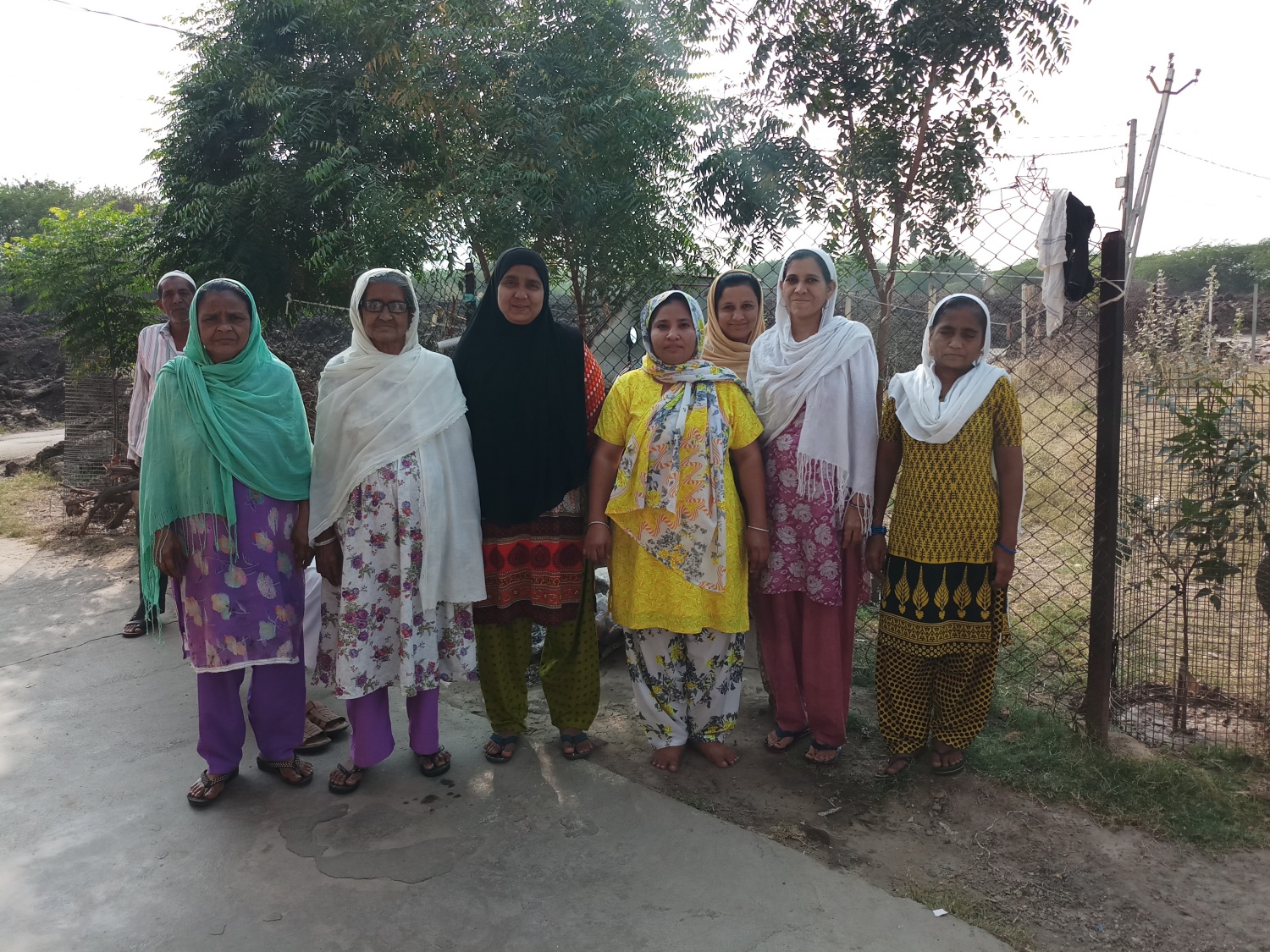 “These colonies are mostly built on the outskirts of the cities and towns. Some colonies don’t even have drinking water, anganwadis or primary schools. These colonies were supposed to be temporary shelters but due to hostile conditions most of the riot displaced chose never to go back. Those displaced in riots have been living in these colonies since 2002, but few have been able to transfer the housing title in their name. This has raised the fear of being displaced for a second time,” Shamshad Pathan, an Ahmedabad-based advocate and activist told The Wire.

“There were people displaced by the riots who had paid an amount of money to collectively buy a piece of land from a private owner so as to establish a relief colony. However, most of the riots victims have either lost the legal documents in the frenzy of 2002 or proper documents were never handed to them. In cases as such in Himmatnagar and Anand, the inhabitants of the colonies are also being threatened to vacate as the concerned land is very valuable now,” says Ujjaini. 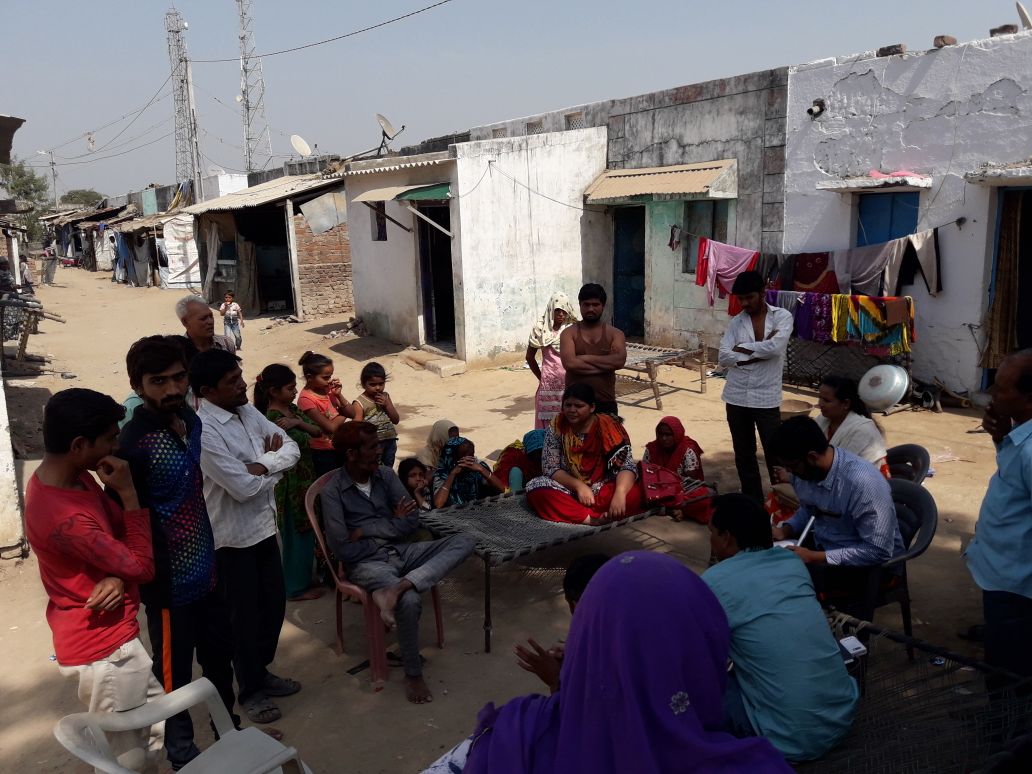 One such colony is Murtazanagar in Pipli village in Anand. A colony with 19 houses with tin roofs, non-plastered walls that have developed cracks and no internal roads or lights, is home to 24 families. The inhabitants of Murtazanagar were landless farmers or labourers from different villages of Anand who now mostly work as daily wage labourers.

“We (the 19 families) bought this land for Rs 1,10,000 in 2002. Each family paid whatever money we could back then. Later some NGO helped us to build the houses. We haven’t been given proper legal documents of the transaction yet. Now that the land value is in crores, the landowner who sold the land to us has asked us to vacate. The men go to the nearest towns for work, our women and children who stay back are threatened by the former landowner,” says Yakubbhai, a 42-year-old resident of Murtazanagar.

“With help from some activists we have filed a case against the former landowner. We spent all the money we could on this land. I work as a labourer and am the sole earner of my family of seven. I manage to earn about Rs 100-150 a day. My eldest son is 17 years old now and has tried many a times to get a decent job in factories around Anand but he was refused each time for being a Muslim,” says Yakubbhai.

In some cases, like in Ahmed Latif colony in Mehsana, houses meant for those displaced by the riots have already been sold. In Mehsana’s Agol village, five of the 41 families have migrated because of poor living conditions. 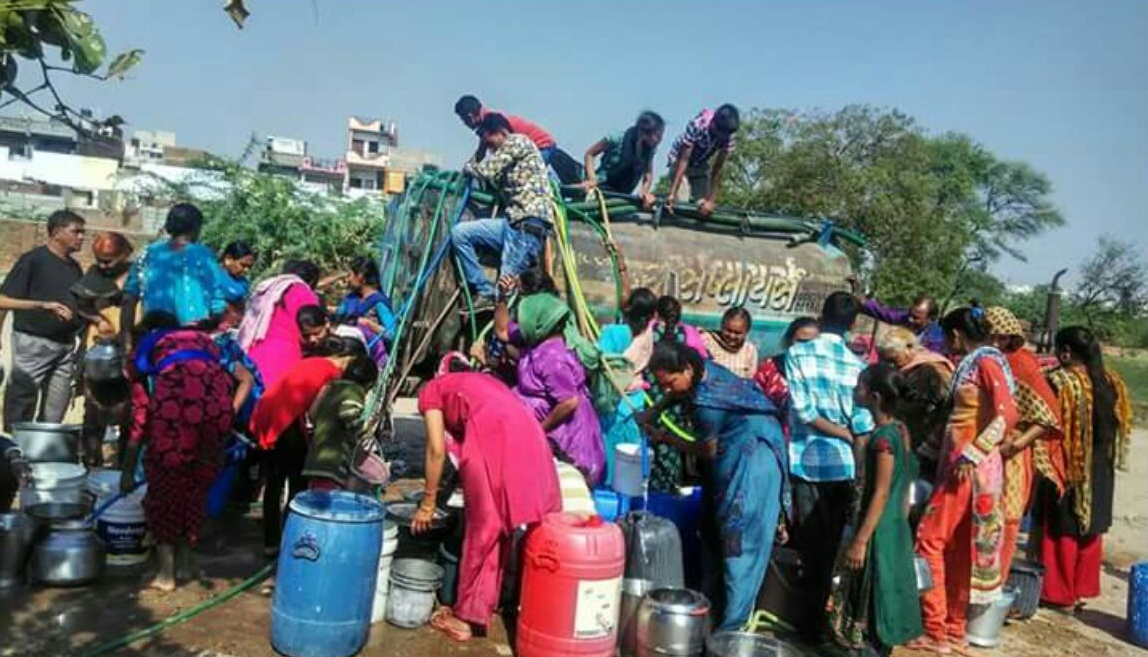 An old photo of water tanker at Madaninagar colony. The residents got water connection only in 2016. Credit: By special arrangement

“Despite abysmal living conditions and the lack of basic amenities, the people who were displaced in the riots have never thought of returning to their old hometowns in these 16 years, primarily because they are still scared to go back. Many have maintained contact with old neighbours and have even managed to rebuild their old houses. But in most areas affected by riots, properties were later sold at an extremely meagre price,” says Samir Sodawala, an activist associated with Janvikas who lives in Panchmahal, one of the worst affected areas.

“Eral, a village in Panchmahal, is the only instance in Gujarat where riot victims decided to go back to their village and rebuild their lives. However, the village still remains hostile. There are regular incidents of Bajrang Dal activists engaging in feuds with the riot victims. There have been many incidents of molestation of women from these families. Just six months ago, members of the Bajrang Dal interrupted Azan (prayer call) (and) had it stopped,” added Sodawala.

Over the years, many relief colonies have also become easy locations for anti-social activities. The Bombay Hotel area near Citizennagar colony and Madaninagar colony in Ramol in Ahmedabad are two such colonies. 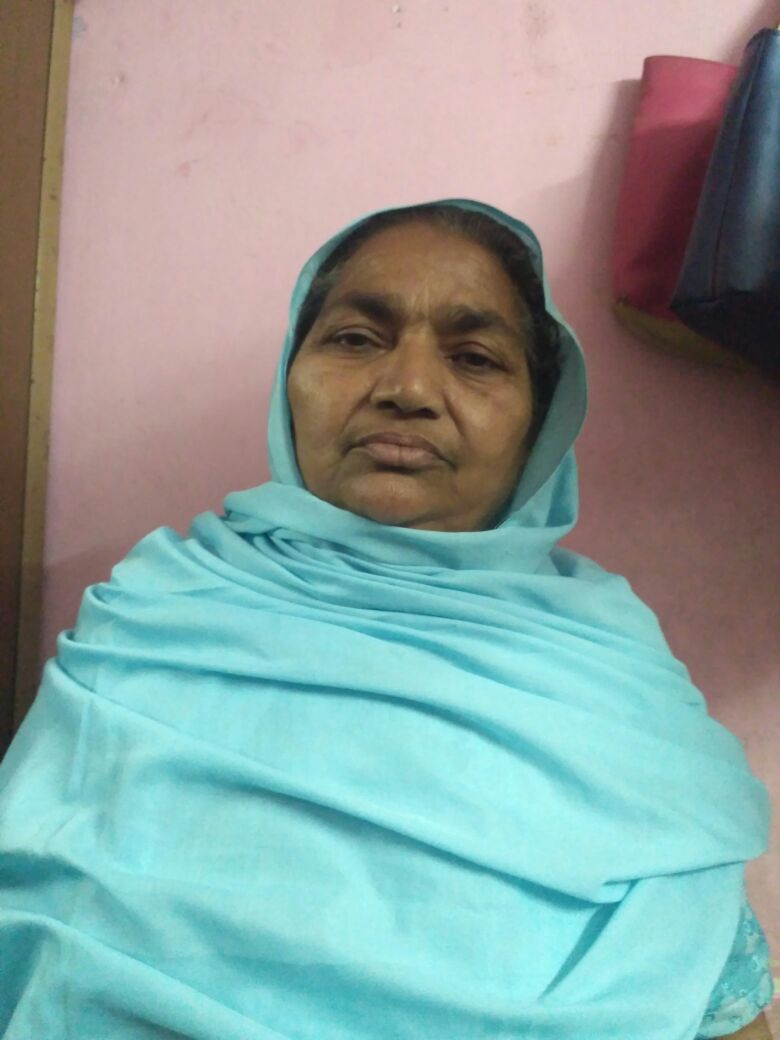 “Madaninagar is one of the colonies in Ahmedabad which has been a vulnerable location for anti-social activities. This remains one of our concern,” says Sharif Malek, resident of Madaninagar colony.

Madaninagar colony, home to over 300 families, established by Jamait-e-Ulema-e-Hind is the largest colony in Ahmedabad.

“We got electricity connection a year after we came to live here. But we got water connection only in 2016. Initially women would walk about a kilometre to fetch water from a bore well. Later tankers of water would be supplied and managed by representatives of Jamait-e-Ulema-e-Hind. Each family had to pay Rs 150. But women still had to fetch water from the tankers and many a times a scuffle would break out in the attempt to get enough water for one’s family,” says 53-year-old Zubedabanu, mother of Sharif Malek.

“Over the years, many women of the colony have suffered miscarriages in the process of carrying water,” adds Malek.

In 16 years, many representations have been made to the government apprising the chief minister about the condition of these relief colonies. According to data from Janvikas, five applications have been written to the CM of Gujarat and more than 15 memorandums sent between 2015 and 2017.

“We haven’t received any aid or help from the government till date. Multiple representation seeking intervention to help us get ownership rights of the house we have been living in for past 16 years have gone in vain. Many of us have been refused loans as we don’t have proper documents,” says Mirkhan of Hussainabad relief colony, Himmatnagar.

“Officials and politicians visit our colony before any election. At times even threaten us to vote else we will be forced to vacate. After all these years we still have no home, we don’t belong anywhere,” he adds.