Ground Report: ‘Normalcy’ Returns to a Corner of Delhi, But Fear and Grief Are a Step Away

A boy’s birth is celebrated even as a long row of houses and shops behind lie scorched and vandalised, each shop looking like it has been blown apart from the inside.

Lakshman Singh, his wife Geeta and their children. Lakshman thinks their home wasn't harmed because of the 'Happy Diwali' banner at the door. Photo: Jahnavi Sen

New Delhi: There’s a party on in Shiv Vihar.

The pink and white shamiana (tent) is lined with chairs, and food is served out of kadhais meant for a feast. A DJ is setting up his sound system. “Iska beta hua hai, aaj naamkaran hai (He’s had a son, this is the function to name him),” an elderly woman tells us, pointing at a man standing in front of us.

Although not entirely keen to talk to us, he introduces himself as Sandeep. “The riots never made it to our lane,” he proclaims. “We made sure of it. There are three Muslim houses here, we guarded the lane all night and in the morning, helped them leave with the police.”

Shiv Vihar is one of the several North East Delhi neighbourhoods where riots occurred early last week. It is perhaps among the worst-affected areas, and parts of it now resemble a ghost town. 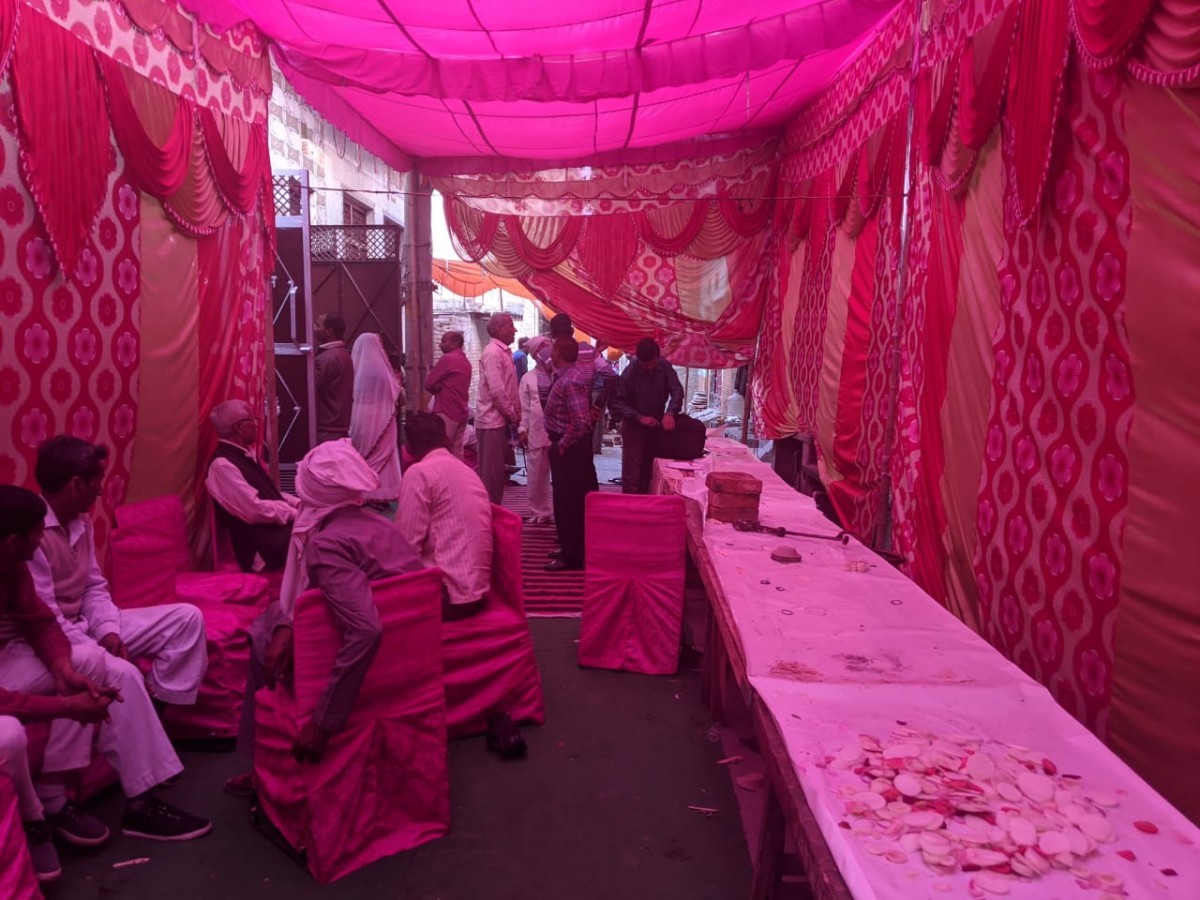 The older woman, though, plays down the extent of violence and arson. “We helped them [Muslims who lived in the same lane] survive. We guarded them. We stood outside the lanes and told the mobs that there are no Muslims here,” she says. “But now they are turning around and saying ‘Hindus burnt our home’ and ‘Hindus wanted to kill us’. How is that fair? Now we are scared, what if they come back and decide to take revenge?”

Women gathered around her agree. “We haven’t slept a wink all week,” one of them says.

“Too many Hindus have died,” another woman agrees.

At this point, Sandeep lets out a forced laugh. “How can you say that?” he asks the older woman. “How do you know this reporter is not a Muslim?”

The party tent is starting to fill up now. It is open from one side and closed off from the other. As the DJ starts to play a Bollywood song, children in parallel lanes start running towards the party, dancing.

The other side of the shamiana, though, is a whole other world.

With the tent blocking access from one side, we approach the parallel lane by going around the neighbourhood. Immediately, one thing stands out – the huge Rapid Action Force (RAF) presence. Several houses are marked with Hindu imagery – swastikas, ‘Happy Diwali’ banners, pictures of gods outside.

The RAF men are at ease here, sharing tea and milk with the residents, sitting on plastic chairs that have been put out. Some shops are open, several people are sitting in the sun outside their houses. Other than a few stray slippers by the side of the road and some shards of broken glass, there is little to suggest that large-scale violence took place here.

About 200 metres down, though, that changes. Dramatically.

The RAF men here are not sitting. They’re on edge, hands hooked into their rifles. “No gathering here!” they repeat to any group that stops to take photos. A fact-finding team is trying to make its way through the glass, rubble and burnt houses, but keeps being told to move along. 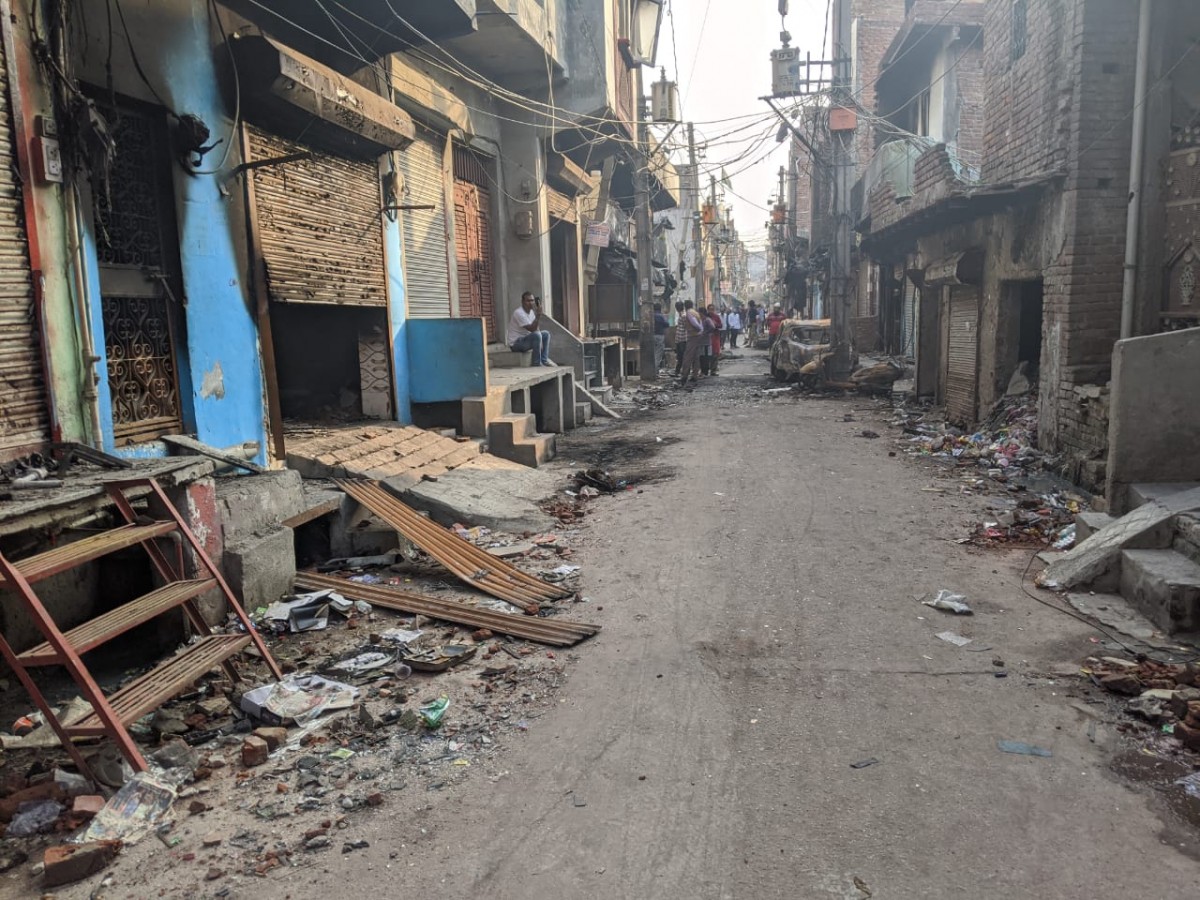 The lane in Shiv Vihar where all the shops and homes have been destroyed. Photo: Kabir Agarwal

The houses and shops here have been scorched and vandalised. Each visible shop looks like it has been blown apart from the inside. The shutters are smashed and lie tattered, as if they were made of cardboard. The walls are disfigured and look like they could crumble if nudged. Clothes, shoes, papers, bricks and burnt vehicles lie scattered outside.

A frail, nervous-looking young man, perhaps still in his teens, enters from the side lane and attempts to reach his house, also burnt and vandalised. An RAF man armed with a rifle and a baton stops him. “The whole thing could collapse! Why are you here? I don’t want to see you here!” The young man retreats hastily, trying to placate the jawan.

We catch up with him. He is not keen to talk. “The house was burnt on Tuesday (February 25). Luckily no one is hurt,” he says and speeds off.

Further down, an even narrower lane leads to the Madina Masjid. The path to it is lined with broken tables, planks of steel, bricks and more debris. Inside the mosque too there is destruction everywhere. The fans are broken and bent upwards. The floor is lined with soot and burnt cloth. The windows are shattered. Its second entrance – which leads to another lane – is even more difficult to get out of, with broken grill, glass and pieces of the mosque’s masonry blocking the doorway. 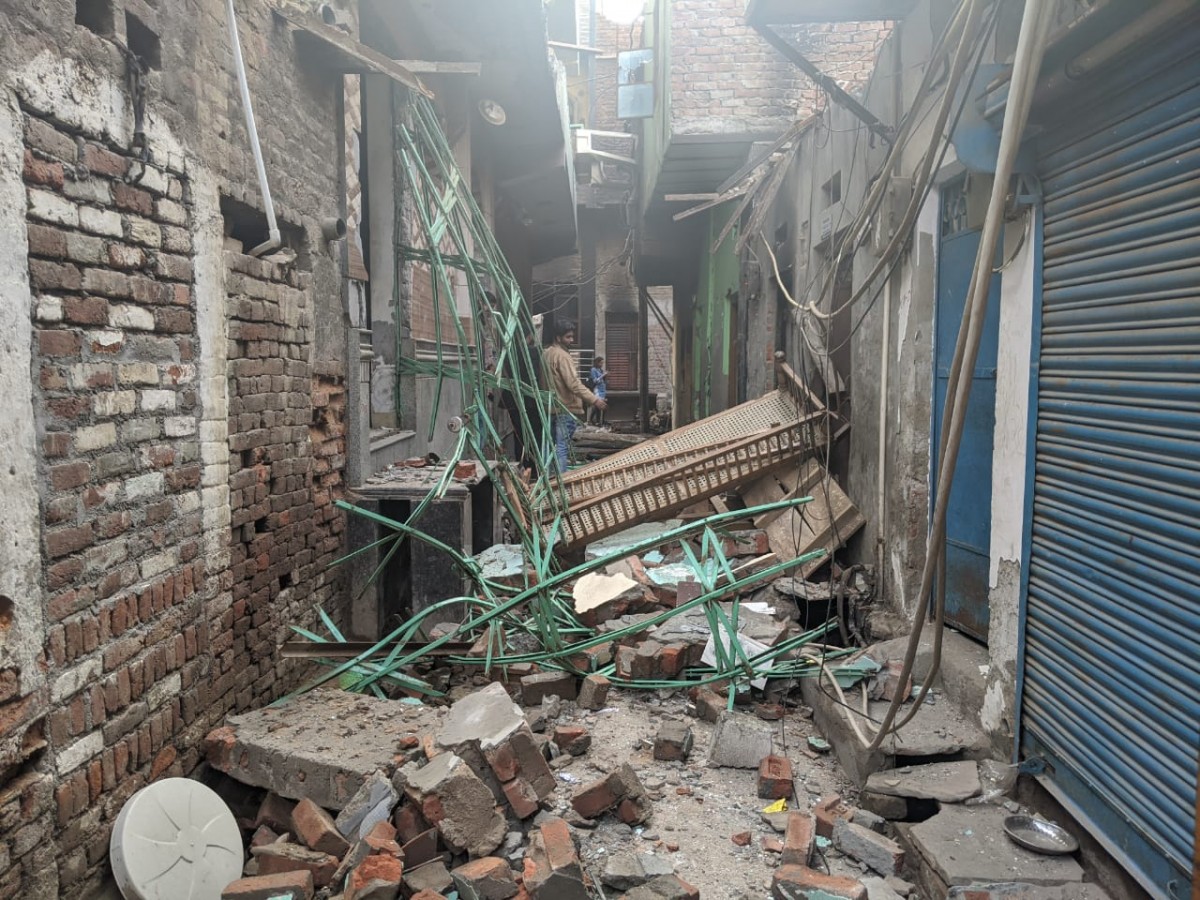 Madina Masjid is inaccessible from one side. Photo: Kabir Agarwal

On this stretch, it’s not just the Muslim homes that have been burnt. While it can’t be confirmed why the mob burnt the few Hindu homes and shops as well, it is possible that nobody was stopping to check. Adjacent to the Madina Masjid is the home of Uma Kant, who says he and his family barely survived the mob. “They were mindlessly vandalising and setting everything on fire. I just picked up my three-year-old granddaughter and ran. For a while, I didn’t know whether the rest of my family had survived,” Kant tells The Wire. “I saw death from up close.”

Outside another stretch of scorched shops, Sheela Devi, a Hindu woman probably in her 80s, is sitting on her haunches. Her family owns the five shops in the row and lives in the house above it, she says. To her left and right were Muslim homes. She and her family had gone home to her village close to Agra when violence broke out in the area. “I have no idea who did this (to our lane),” she says. “But everything has been destroyed. They have destroyed and looted our shops. Even our home upstairs has been burnt.” 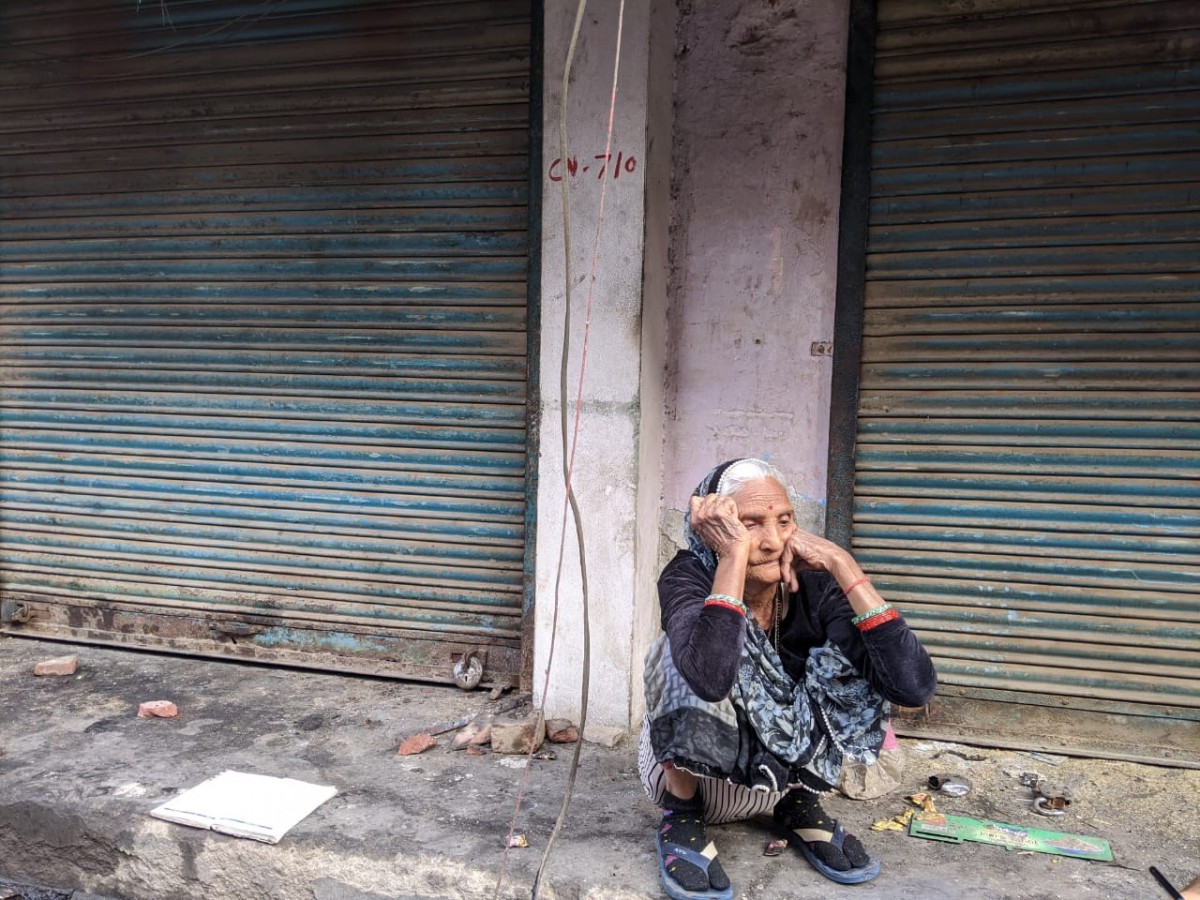 Sheela Devi, sitting outside the shops her family owns. A Hindu woman who lived in a row alongside Muslims, her house and shops were also burnt by the mob which rampaged through here last week, burning and smashing everything. Photo: Jahnavi Sen

Back towards the party area, a few lanes down from the celebration, a family of four has just come back to their house. There is a clear distinction in their particular gali – here, the Hindu homes have been left intact, while the Muslims homes have been broken or burnt. There is a ‘Happy Diwali’ banner on their doorway, and Lakshman Singh thinks that’s how the mob knew not to burn their house.

“We were scared and we left,” he says, surrounded by his pregnant wife and two young children. His father is inside the house, still scared about coming out. “We didn’t know if we would be spared. We came back this morning to find our house untouched.”

He is a daily wage earner who works in construction. “There has been little work in the last few months. And the last seven days, I have not got any work at all,” he says.

He and his sons point to the damage their neighbours’ – Muslims’ – properties have suffered. Two charred cars, plundered homes, a balcony that has collapsed, walls that have caved in.

So were Muslims specially targeted, have they lost more? “Yes. Muslims have definitely lost more.”

And two lanes over, the party continues.