"There is a Very Blatant, Outright Murder Campaign Against Me," Says Salman Taseer's Son

The campaign against Shaan Taseer shows that the intolerant atmosphere that led to his father's untimely death has not ebbed. 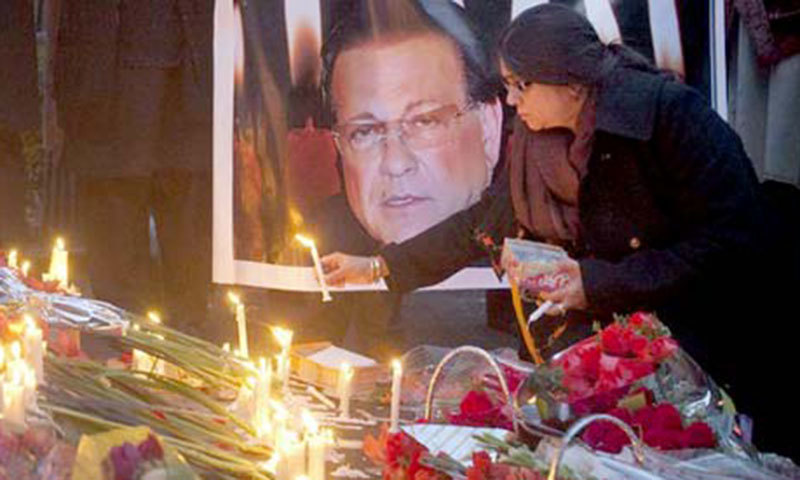 A women lighting a candle at the death anniversary of Salman Taseer. Credit: Reuters

New Delhi: Six years after the governor of Pakistan’s Punjab province was assassinated by his own bodyguard, his son Shaan Taseer has become the target of an “outright murder campaign” by a hardline Islamist group. This campaign started after Taseer, in a Christmas video message, professed sympathy for Pakistanis who have been prosecuted by the country’s anti-blasphemy laws.

On January 4, 2011, Taseer’s father Salman Taseer was shot 28 times by his bodyguard, Mumtaz Qadri after advocating that Asia Bibi, the first woman to be sentenced to death for blasphemy, be given a presidential pardon.

Like his father, Taseer has kept up a steady stream of activism both on the ground and on social media, in particular over the urgent need to repel section 295C of the Pakistan Penal Code that criminalises blasphemy and punishes it with death.

In the last week of 2016, Taseer, a 45-year-old artist based in Canada recorded a short video to extend wishes for Christmas and hope that the victims of blasphemy law would be free soon. The 34-second clip was first uploaded on the Facebook community page for Pakistani Christians, which Taseer shared on his own account several hours later. The message was as follows:

My name is Shaan Taseer. Merry Christmas to all of you. On this Christmas, please keep all of your countrymen in prayer who have been victim of religious extremism, especially Asia Bibi, Nabeel and all those who have been hurt by this inhumane law. Please pray that their troubles are eased soon. May you have lots of happiness wonderful day of Christmas. Pakistan Zindabad [Rough translation]

On 29 December, the Tehreek-e-Laibaik Ya Rasool Allah, a network of Barelvi groups, filed a complaint against him in Lahore’s Mughalpura police station for describing the blasphemy law as “inhumane”. Their written complaint, posted on their Facebook page, claimed that Taseer’s remarks in the video were “foul, derogatory, hateful and somewhat puerile”.

Demonstrating their inherent confidence that no action will be taken against them, the Islamist group, who openly celebrate Mumtaz Qadri as a saint, made a not-so-subtle threat towards Taseer in their official police complaint.  “Also, that in past it was seen that no action was taken by any security agency or court against the father of the culprit who committed the same crime & most probably this is the reason that a person from general public came up & took the responsibility,” it said.

A day later, the police did file a first information report on the video – but against unknown persons. The official document claims that the police found Taseer’s video in an USB flash drive that was lying outside the police station. Since they couldn’t ‘identify’ him, the FIR was filed against ‘unknown’ persons under Pakistan penal code’s section 295 A against ‘hate speech’.

“It is a joke,” Taseer told The Wire on phone from Ontario. “I have worked with the police before. It takes a significant amount of money, bribery or a significant amount of political influence to make the police do anything. This would have to be the first time in history of Pakistan police that they walk out (of police station), find a USB, open it up and become so concerned about the content that they launched an investigation”.

The police filed the case under “tremendous pressure from the Sunni Jamaat”, he said. While the government has only filed one FIR, Taseer believes that the religious groups are trying to register multiple cases against him across Pakistan to further intimidate him.

In the last two years, Taseer has become deeply involved in campaigns against the blasphemy law and religious extremism. He joined the civil society siege on the Lal Masjid in Islamabad, which began as an outpouring of anger against its cleric, Maulana Abdul Aziz, who refused to condemn the massacre of the children at Army Public School in Peshawar in December 2014. His activism broadened to speak out against the hate speech pedalled by some religious clerics and banned organisations calling for the death of certain minorities like Ahle Sunnat Wal Jamaat (ASWJ).

Taseer is rather bemused about the specific section of the Pakistan Penal Code under which he has been charged (hate speech and religious incitement).

“No action was ever taken against them so far [for engaging hate speech].  And now, the first incident of police action that we see is against an anti-hate speech activist for a Christmas message. The irony over here is as thick as a fog,” he added.

The police complaint by the Sunni Tehreek has been accompanied by a sharp escalation in death threats made against him. A perusal of Taseer’s social media accounts show that there is a lot of support for him, but there are threats of death with repeated mention of his father.

“There is a very blatant, outright murder campaign against me. As a result of that campaign, I am getting a lot of messages saying that they will murder me, that they don’t care what happens to them, that they want to be another Qadri”.

In a way, Taseer had been expecting the Islamist groups to turn their attention towards him, one day. “This is the first time that I am at the receiving end, but frankly, I am not taken aback”.

He listed close compatriots who have paid the ultimate price for their activism. “Just last year, my friend Khurram Zaki was murdered. A year before, it was Sabeen Mahmud. These are colleagues that one has worked with. Therefore, this does not come as a complete surprise. One has been part of this. If you are part of the activist community in Pakistan, many get picked up and killed”.

Human rights group have been regularly highlighting that the blasphemy laws are frequently used to settle personal scores. But, once invoked, it becomes a rallying point for local Islamists to flaunt their influence.

In October 2015, the Pakistan Supreme Court had also made the same observations while refusing appeal to consider Qadri’s case leniently. “The majority of blasphemy cases are based on false accusations stemming from property issues or other personal or family vendettas rather than genuine instances of blasphemy and they inevitably lead to mob violence against the entire community,” said the order.

Being actively involved in this type of activism, the Christmas message was not the first time that Taseer had spoken out in favour of the anti-blasphemy law victims.

“I support their families financially. I have arranged for their legal defences. The case of Nabeel Masih is known to the world because of me. He came to me and I took his case to the international media. I keep talking about them,” he said.

Masih, a 16-year-old Pakistani Christian, was arrested last September after a complainant claimed to have seen a derogatory post on the former’s Facebook page.

“I support Asia Bibi’s family financially. So, I am very close these families of victims of blasphemy and my connection with them is nothing new”.

Then why have the Sunni Tehreek targeted him now? “They have used the whole affair of my father’s killing as ammunition to expand their influence in society. They have glorified Qadri [Salman Taseeer’s assassin] and are helping to build a shrine for him in Islamabad,” he pointed out.

He believes the death anniversary of his father was the catalyst fuelling Sunni Tehreek’s urgency in filing a case against him. “I am only guessing, but with my father’s death anniversary coming up, they probably thought it was a grand time to use that for a peg to weave a song and dance”.

Even as Taseer seems unfazed, the recent threats have certainly jolted his family. “My mother has been constantly scolding me. Of course, family is always concerned,” he added.

Despite the police complaint, Taseer does plan to return to Pakistan, as part of his regular trips. “But, I will be taking precautions. I won’t be announcing my whereabouts or movements”.

When Salman Taseer was shot dead, it had felt like that killing was shocking could jolt Pakistani establishment out of its practice of turning a blind eye to the activities of proscribed groups, often under the garb of national security and strategic depth. The flower petals showered on Qadri by lawyers as he was presented in court quickly disabused any such notion.

Six years on, Taseer believes that Pakistani society has become more divided. “My father’s death anniversary was celebrated throughout the country as a symbol of peace and tolerance among the minorities and intelligentsia,” he said.

On January 4th, Punjab police arrested over 150 members from religious group, Tehreek-e-Laibaik Ya Rasool were as they attempted to organise a rally in favour of the anti-blasphemy law in Lahore. A day later, members of the same group defaced the outer wall of the Karachi Press Club which was covered with large portraits of Pakistani human rights activists like Sabeen Mahmud and author Fatima Surraya Baija.

In Pakistan, and India, society has become more polarised, just as there are similar trends worldwide, says Taseer, adding that there were also specific localised reasons for this in his country.

The 20-point National Action Plan, unveiled by the government after the APS attack, had a provision for “registrations and regulation of Madrassas”, but it has to yet be fully implemented in the last two years.

“There are 30,000 madrassas in Pakistan, which are all unregulated and churn out radicalised young men,” he said, adding, “There is a very inherent radicalisation of Pakistani society”.