Sachin Pandit's Facebook profile not only advertises his extremist views but also his proximity to key BJP leaders from Uttar Pradesh. 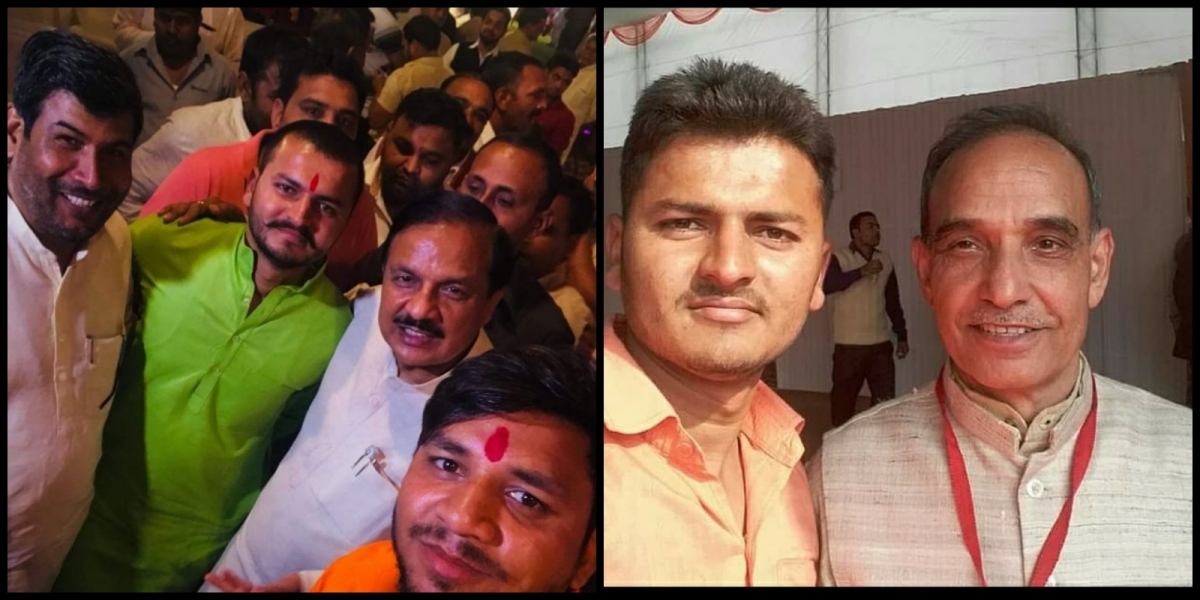 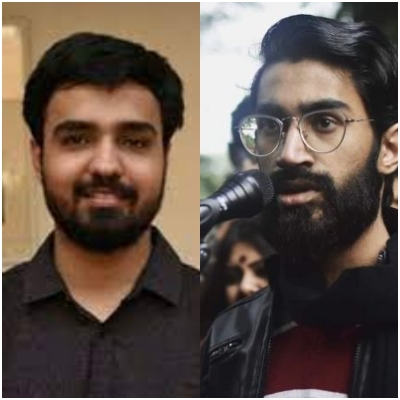 New Delhi: One of the two Hindutva extremists arrested for opening fire on Asaduddin Owaisi, the All India Majlis-e-Ittehadul Muslimeen (AIMIM) chief and MP from Hyderabad, says he is a member of the Bharatiya Janata Party (BJP) and his Facebook profile carries numerous photographs advertising his proximity to key BJP leaders from Uttar Pradesh.

Owaisi’s convoy was fired at on February 3, 2022 at the Chhajarsi toll plaza when he was leaving for Delhi after an election-related event in Meerut. The MP tweeted that his assailants comprised 3-4 people who fled the scene, leaving behind their weapons. He was safely escorted to another vehicle and left for Delhi. At least 3-4 bullets appear to have been fired in the attack.

On Thursday evening, the Uttar Pradesh Police said it had arrested two people – Sachin Pandit and Shubham – and that country-made pistols have been recovered from them. The two have been charged with Section 307 of the Indian Penal Code (attempt to murder) and Section 7 of the Criminal Law Amendment (‘Molesting a person to prejudice of employment or business’).

One of the accused, Sachin, seen in the photograph released by the police in a white jacket, is a resident of Badalpur, Noida and claims to have a law degree. His photograph matches the profile of a Facebook account titled “Deshbhakt Sachin Hindu” and analysis of the page’s contents reveals not just his violent views but also the fact that he is a member of the ruling BJP.

His violent views on Facebook range from wanting to assassinate Asaduddin Owaisi to asking Prime Minister Narendra Modi to send him to Pakistan as a suicide bomber. He has also shared a post glorifying the militant Hindutva supporter who had opened fire upon Jamia students during the anti-CAA protest on January 30, 2020.

He posted his BJP membership slip on his Facebook page on July 7, 2019, tagging Shripal Verma, BJP’s district president for Gautam Buddh Nagar. Even before formally announcing his membership of the BJP, Sachin publicly displayed his affiliations with the party. In several of his Facebook posts, he calls BJP MLC Shrichand Sharma his “Guru”. He was involved with the campaign team of BJP candidate from Gautam Buddha Nagar Mahesh Sharma, the former Union culture minister in Modi’s government and current MP from this constituency. 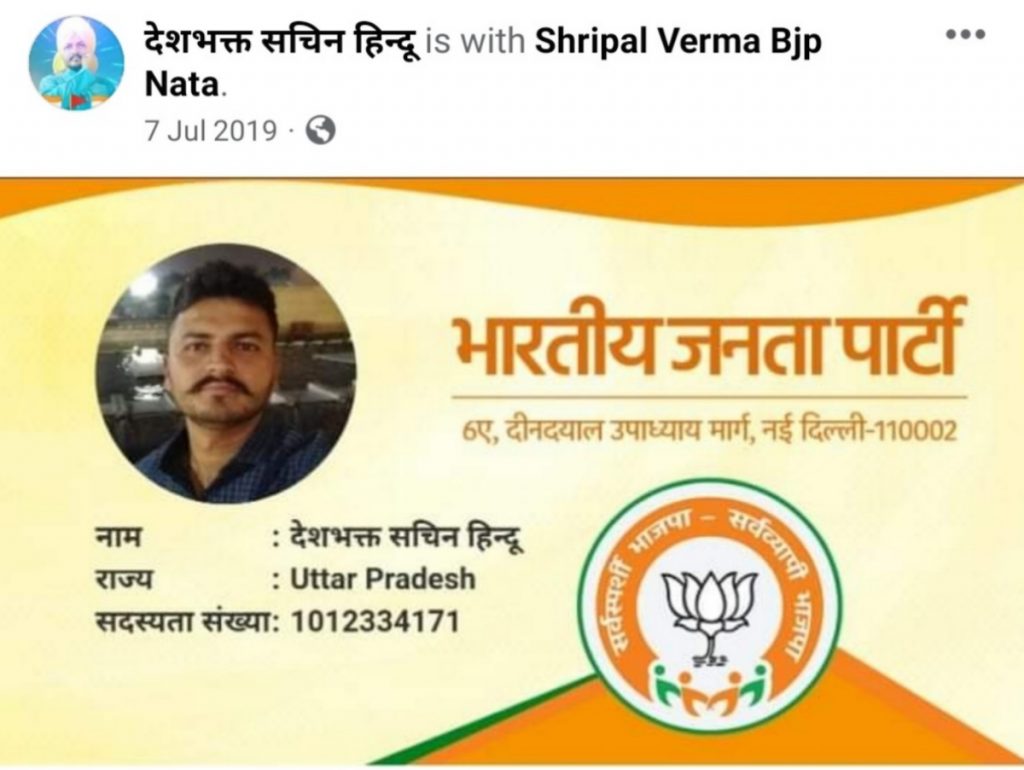 Pandit also uploaded pictures with top leaders of the BJP in Uttar Pradesh and Delhi, including a selfie from 2017 where he can be seen standing close to Amit Shah, who was then BJP president. Pandit’s ability to come so close to Shah – the second most important leader in the BJP after the prime minister – is bound to raise questions about the government’s less than even-handed approach to extremism and terrorism in the wake of his involvement in an attempted political assassination. 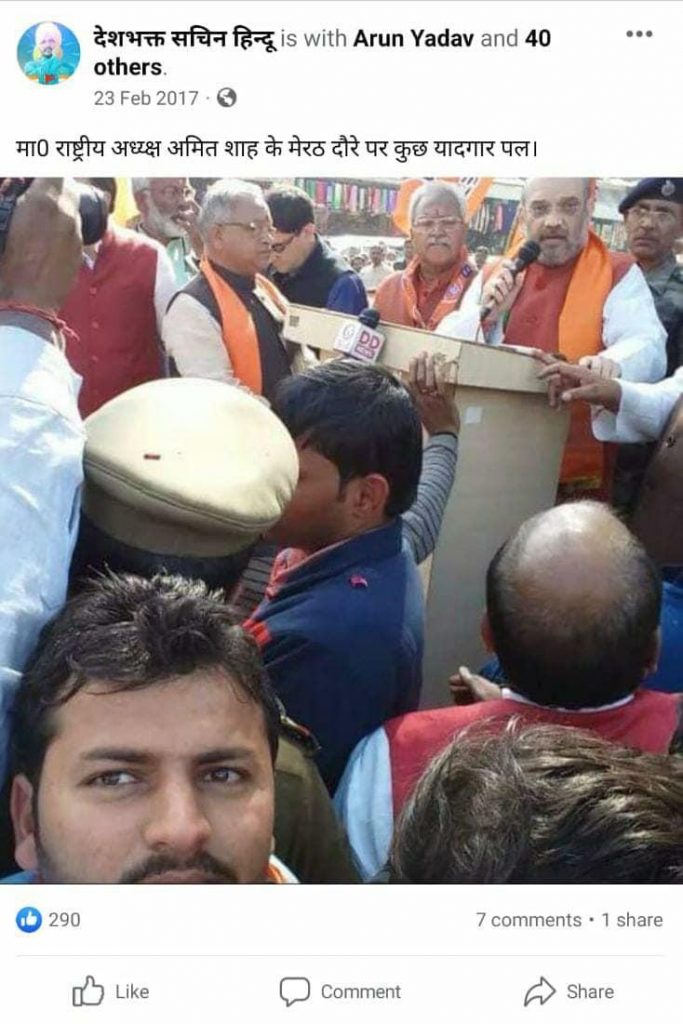 A selfie from 2017 in which Sachin Pandit is seen standing close to Amit Shah. Photo: By arrangement 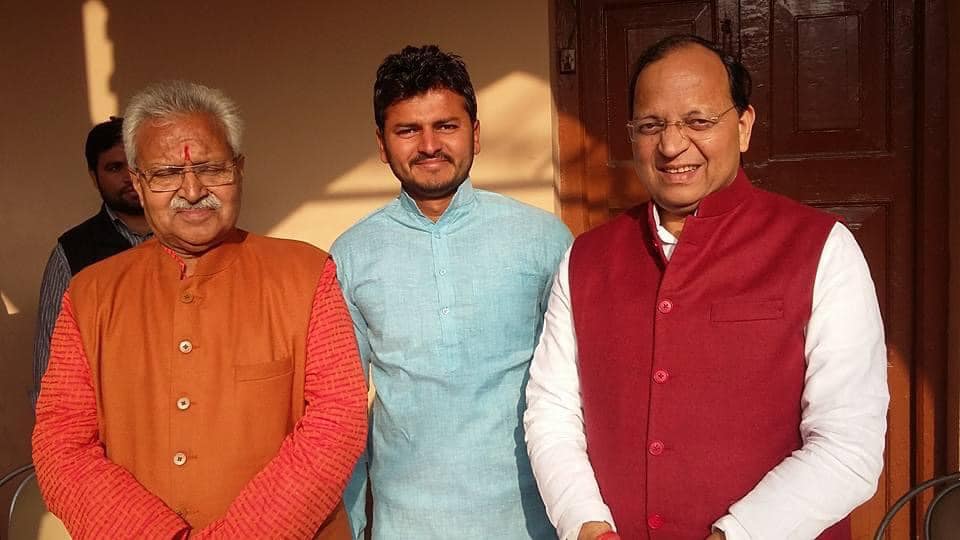 On December 26, 2021, while campaigning for Amit Prajapati, a Hindu Raksha Dal candidate contesting the UP assembly elections from Loni, Pinky Chaudhary had exhorted his followers to assassinate Owaisi. Citing an edited video of Owaisi about alleged police brutalities on Muslims and Dalits, Chaudhary called for retaliation. “I want to warn Owaisi, as long as the volunteers of Hindu Raksha Dal and warriors of Hindu Raksha Dal are working for Hindutva, they will slit your throat and glorify my name,” he said in the video.

The video also shows Chaudhary, who is an associate of the Hindutva extremist Yati Narsinghanand, calling for genocide against Muslims (‘fast poison’) and Christians (‘slow poison’). The video is still available on Chaudhary’s social media.

However, this was not the first time when followers of Narsinghanand have incited hate and violence against Owaisi. In fact, in an article on “how Narsinghanand scared Owaisi” in the right-wing propaganda website ‘Kreately’, promoted by BJP leader Kapil Mishra, there is a direct reference to shooting Owaisi.

The article lauds Narsinghanand’s violent messages and mentions that when he learned that Owaisi wanted to hold a rally in Ghaziabad in 2014, Narsinghanand allegedly declared that he would shoot Owaisi. “Cops tried to persuade Yati and also said that on the day of the rally you will be under our watch. He replied that this is even better, I will not shoot at all… the bullet will be fired and then you will also testify that if Yati ji was with us then how can he shoot?” the article adds. This account of the 2014 incident was published in 2021 and was widely shared. There are other inflammatory articles promoting Narsinghanand on the website too.

On November 9 2021, Suresh Rajput, a disciple of the militant Hindutva priest uploaded a video on Facebook about Owaisi. In it, Rajput called Muslims “pigs” and described the violence against the Muslim minority in Tripura – which was widely reported at the time – as “Diwali”. He even glorified sexual violence against Muslim women in the video, The Wire had reported. The video reached 2 lakh people in less than 24 hours. According to AltNews, despite multiple violations, Rajput continues to make and promote violent videos on Facebook.

Sachin Pandit has also shared videos of Yati Narsinghanand exhorting Hindus to put aside their caste differences and unite against the ‘common enemy’, the ‘Jihadis’ [Muslims]. In addition, he has been sharing inflammatory videos against Owaisi. In one recording shared on his Facebook page, Owaisi is shown as a traitor, with a knife placed near his throat with the demand that he leave for Pakistan. 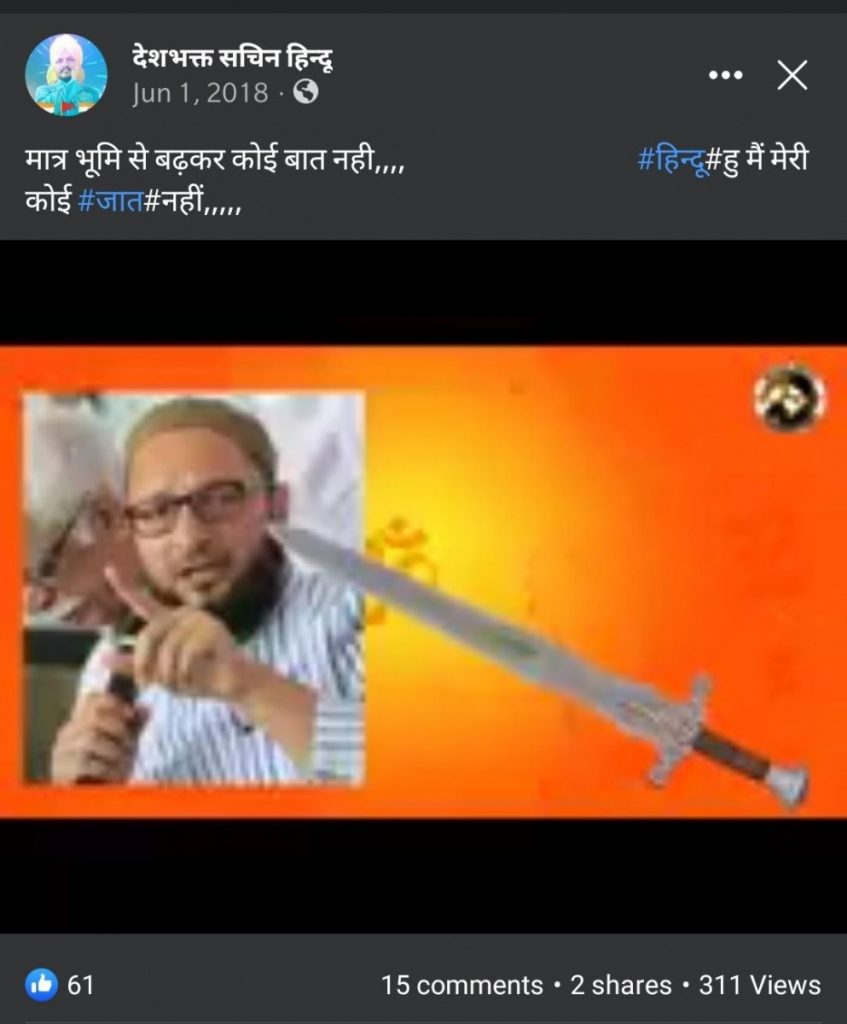 A photo on Sachin Pandit’s facebook profile with a knife pointing at Asaduddin Owaisi. Photo: By arrangement

Violent videos against Asaduddin Owaisi are not new. Mainstream news channels and anchors like Suresh Chavhanke of Sudarshan TV have described him as a demon, a traitor and “worse than a dog”. The Hindutva pop music industry led by Sandeep Acharya, another disciple of Narsinghanand, has made graphic videos and hate songs against the AIMIM leader.

After Sachin and Shubham were arrested by the police, Vishnu Gupta, the Hindu Sena leader whose group had vandalised Owaisi’s official residence in September 2021, applauded the shooters and extended legal aid to them.

The National President of @Hindusena Shri @VishnuGupta_HS has announced to give legal aid and respect & honor to Sachin and Shubham who threatened to attack @asadowaisi car, this is not an attack on Owaisi but a warning.#Hindusena #asadowaisi @Outlookindia pic.twitter.com/f8UuCuw5i2