It is one thing to say that the Congress party should not keep the focus on the RSS strategically. It is quite different a thing to use this opportunity to say that it is not only futile but wrong to critique the RSS. 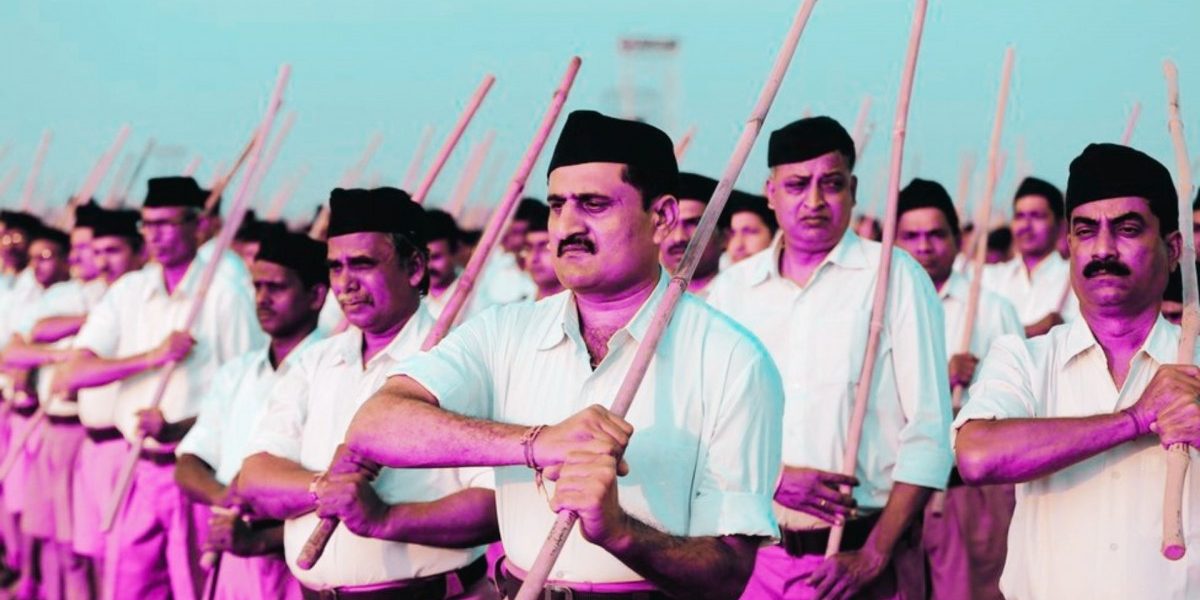 Attempts to whitewash the Rashtriya Swayamsevak Sangh are intensifying. Congress party leaders, especially Rahul Gandhi, are being warned by intellectuals of different hues that it would only harm them and their party if they criticise the RSS.

Sudheendra Kulkarni, who admires Rahul Gandhi and sees in him the future of India, is worried by his constant attack on the RSS during the Bharat Jodo Yatra. In a recent article, he wrote that these attacks were  not only unnecessary but also damaging for the Congress. The argument that the focus of the yatra should be on the people and its message should always be positive is a valid one. You cannot make negative figures like the present prime minister or the RSS the centre of the Yatra’s discussion.

Rahul Gandhi and the Congress Party should talk to the people, make them aware of what is happening around them. If the centre of the discussion is Narendra Modi and the RSS, then the discourse will naturally get dragged down to their level. So, the challenge before the Yatra is to help people rise above the current rhetoric of hate dominating India’s political and social discourse and act on a higher plane of empathy and compassion. These are fair points.

However, to ask the Congress to talk about itself, its politics and its message is one thing and quite a different matter to say that the RSS is an organisation which has united India and is therefore beyond criticism. The claim that the RSS is a patriotic organisation is laughable. Such a claim is deeply insulting to Indian Muslims and Christians and also Sikhs. The role of the Sangh and its ‘parivar’ in violence against Muslims and Christians in independent India is well documented. Different enquiry committees and fact-finding teams have found the hand of the RSS and its affiliated organisations in many communal riots that have taken place in India.

Can one deny that the RSS was behind the campaign that ultimately led to the destruction of the Babri Mosque, an event which led to the killing of hundreds of people across India? An RSS man, Lal Krishna Advani, led it. Another RSS man who was assisting him in  his Rath Yatra is the Prime Minister of India today. 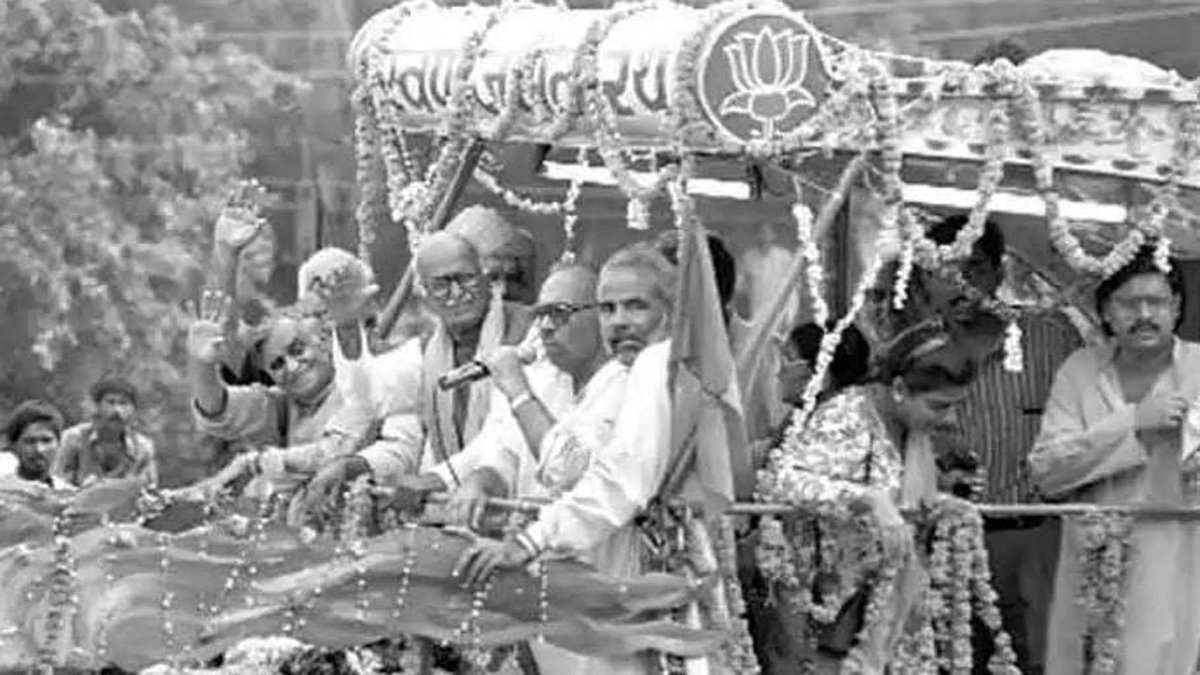 Was the objective of the campaign noble? Was it justified? It meant death and destruction for Muslims. But it damaged Hindu society in a much more devious manner. It started a process which has helped the Hindutva groups further their goal of producing Hindus who are full of suspicion and hatred towards Muslims and Christians. It has also carried this hatred outside India through various Sangh affiliates and created strife in countries like Canada, Australia, USA , England, etc.

Can we forget the slogans of ‘Babar ki auladon ko…”(‘Babar’s progeny…’) or “Pakistan ya kabristan” (‘Pakistan or graveyard’)? Who coined these if not the people who belong to the RSS network?

Has this hate campaign against Muslims ceased? What are the ‘unofficial’ organs of the RSS – Organiser and Panchajanya – doing every week? What are its affiliates the VHP and Bajrang Dal doing?

The apologists of the RSS absolve the organisation of these crimes because at no point of time has the RSS been arraigned in any court of law as an accused. Scholars who study the RSS know the reason. The RSS takes care that there is no documentation of the association of people with it. Are we aware of the number and names of people who give annual guru dakshina (money given to a teacher) to the Sangh?

Can we ask for a list of its members? Does it furnish its annual accounts to the state authorities? And why is all this not seen as being problematic?

Is it a coincidence that students studying at the Saraswati Shishu Mandirs and other educational institutions affiliated to the RSS come out with minds viciously biased against Muslims and Christians? My personal interviews with some of those who studied in these schools reveals that their education had turned them  suspicious towards Muslims – if not completely anti-Muslim. I happened to examine one MPhil dissertation which specifically looked into the working and curriculum of the schools run by an RSS affiliate. It described in vivid detail how these schools, which number in the thousands across the country, use their morning assemblies, their class room activities, syllabus, etc. to manufacture a mind which is narrow and suspicious towards diversity. 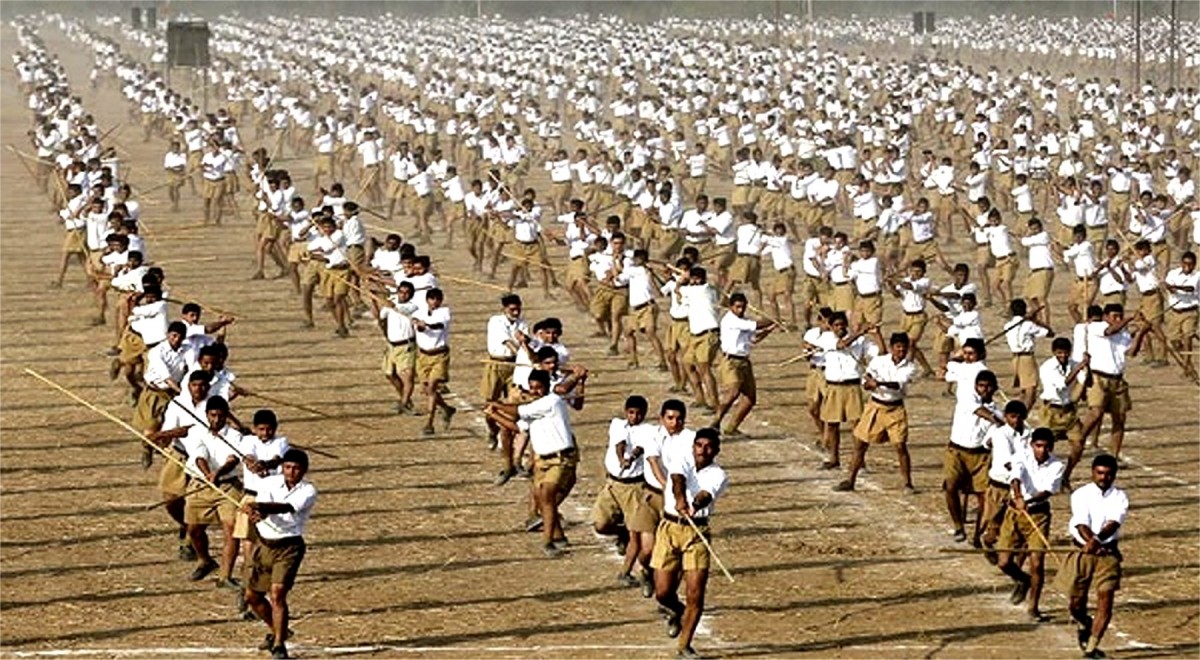 The RSS treats India as a Hindu Rashtra. Isn’t it obvious that the concept of Hindu Rashtra  goes against the constitutional design and vision of a secular India?

Our attitude towards the RSS says a lot about ourselves. Curiously, some Gandhians feel that the RSS was doing a necessary job of defending Hindus. Against whom? Even if accept that competitive communal politics was a feature of colonial India, there was no scope for it in independent India. Even then, the RSS didn’t change its objective of making India into a Hindu Rashtra. Even after the assassination of Gandhi and the ban on the RSS, many Congress people  were ready to do business with it.

The RSS seeks to militarise Hindus. Why? Against whom? Why doesn’t this disturb us? Why do we find it acceptable that a Hindu mind is being manufactured, which feels that it is the best and that other religions and cultures are inferior to it? Why doesn’t the notion of Hindus being the first citizens of  India perturb us?

In a recent piece, Professor Badri Narayan says that the image of the RSS as a violent organisation was constructed in the initial years of the post-partition India and now it has faded in the  public imagination. Constructed? Does it mean that the RSS was not actually violent and it was the constructed image of it as a violent organisation, which was responsible for people’s alienation from it? According to him this image has now given way to a different picture of the RSS because of its seva (service) work among different sections of Hindus. Does it really do seva?

Badri Narayan says that people (he means Hindus) don’t differentiate between Hinduism and Hindutva. Hence, calling it an organisation of the ideology of Hindutva does not go against it. We know that most of the people cannot discriminate between the two but does it make Hindutva less dangerous? Does this confusion not make it even more necessary for us to educate Hindus about the dangers of falling into the trap of Hindutva? That it is a political project aimed at capturing India while masquerading as the protector of Hindus? Should we not warn them that they should not send their children to the hate factories which run in the name of educational institutions of the RSS? That they must examine everything the RSS says carefully to find its falsehoods.

There is another argument – that the RSS has expanded its base amidst the Dalit and Adivasi communities and therefore one should be careful while criticising it. They wouldn’t accept the criticism. Does the act of finding space in these communities make the organisation progressive and beyond criticism?

The RSS is the single most dangerous source of instability in India. Think about an organisation, which openly trains Hindus in lies, suspicion and hatred. Lies about their past, their present, about Muslims, Christians. These lies lead to suspicion and then hatred towards others.

These are facts and not assumptions. The RSS is also more dangerous than other organisations because it is an entire ecosystem of hatred. Hundreds of organisations espousing the ideology of Hindutva flourish in this swamp. The RSS functions without any accountability for the actions of its affiliates and its members. So, it can easily distance itself from them, once they have done their job.

It is difficult to fathom the reason for the urge of some people to normalise the RSS and treat it respectfully.

It is one thing to say that the Congress party should not keep the focus on the RSS strategically. It is quite different a thing to use this opportunity to say that it is not only futile but wrong to critique the RSS. It is the job of intellectuals, more than any political party to make people aware of the web of lies of the RSS which traps them and suffocate their reasoning and stifle their sensibilities.