Following a similar disruption on April 20, Hindu groups had held a protest demanding a city-wide ban on offering Friday prayers on open plots. 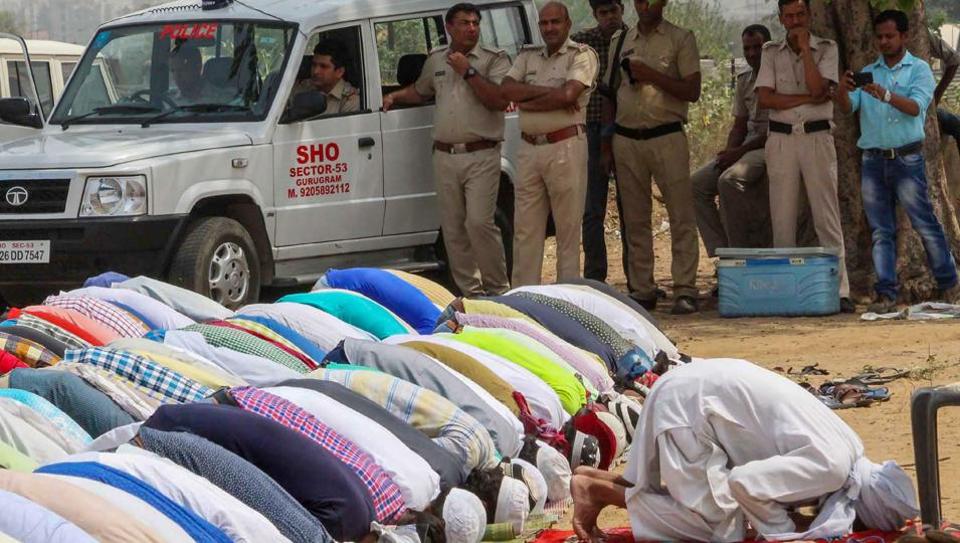 New Delhi: Members of several right-wing Hindu organisations once again prevented Muslims from offering namaz on open plots in various parts of Gurgaon today, May 4. This development came after similar disruptions on April 20, which were following by protest rallies by various right-wing organisations in the Haryana district, demanding a city-wide ban on offering Friday prayers on open plots.

While many expected the city administration to act and persuade the Hindu groups to relent, the priorities of the Manohar Lal Khattar-led BJP government in the state clearly lie elsewhere. Instead of resolving the crisis, the government decided to erect iron boards at some of the plots in question, saying that the land in question belonged to the Haryana Urban Development Authority (HUDA) and that “status quo” needed to be maintained on it as per a high court order.

The problem had first surfaced when six men disrupted Friday prayers at a vacant plot in Gurgaon’s Sector 53 on April 20. About 500 men were gathered on the government-owned plot when the accused disrupted the namaz with chants of ‘Jai Shri Ram’ and ‘Radhe Radhe’. While it was alleged that the accused were affiliated with pro-Hindu groups, the police had denied this and stated that they were all from the neighbouring village.

The Wire had earlier reported on the arrest of these six men.

Subsequently, several Hindu organisations, led by the Sanyukt Hindu Sangharsh Samiti, had staged a demonstration in Gurgaon on April 30, demanding that the case registered against the six be withdrawn and a city-wide ban be imposed on prayers by Muslims in open spaces in the vicinity of Hindu-dominated neighbourhoods.

There are 22 mosques in Gurgaon and about 106 open spaces where namaz is offered.

According to an Indian Express report, the protesters had submitted a letter addressed to Khattar and deputy commissioner Vinay Pratap Singh alleging that under the false pretext of prayers, the worshippers were chanting anti-India and pro-Pakistan slogans and that they intended to occupy the land illegally.

“When some patriotic youth stopped them from doing this, police conducted a one-sided investigation. Does chanting ‘Vande Mataram’ and ‘Jai Shri Ram’ come in the ambit of offence that the youth were arrested?” they said in the letter.

A report in The Hindu had also quoted Gurgaon Shiv Sena president Gautam Saini, who was among the protesters, as saying, “Crimes against women are on the rise across the country and it is difficult to establish the identity of these men offering namaz in large numbers near the village every Friday. It is not known whether they are Rohingyas, Bangladeshis or Mewatis. It is a potential threat to the girls and women of the village.”

He argued that these men were allowed to assemble anywhere for prayers without prior intimation to the administration every Friday, even though, by law, permission was required for holding meetings and protests.

The outfits had also stated this in their letter:

“Rohingyas and Bangladeshis residing in Gurgaon should also be identified and marked. Permission should not be given to read namaz in Hindu colonies, sectors and neighbourhoods. Permission should only be given in those places where the strength of this population is more than 50%, otherwise there will continue to be a possibility of peace being obstructed.”

These allegations were countered by the Muslim residents who had come to offer prayers. The complainant in the case and head of the Nehru Yuva Sangathan Welfare Society Charitable Trust, Wajid Khan, said the residents had been gathering at the site for over a decade for prayers. “We don’t even talk to each other when reading the namaz; chanting slogans is out of the question. These are just false allegations,” he charged.

Following the protest by the Hindu groups, the administration had put up public notices at the disputed sites. At the Sector 53 plot, a notice board was put up saying it was HUDA land.

Indian Express correspondent Sakshi Dayal tweeted that “a board has been erected at the plot near Wazirabad, Gurgaon, where namaz used to be read on Fridays, stating the land belongs to HUDA. 2 weeks after prayers were disrupted, even as right wing groups threatened action, namaz was not read in the area this week.”

A board has been erected at the plot near Wazirabad, Gurgaon, where namaz used to be read on Fridays, stating the land belongs to HUDA. 2 weeks after prayers were disrupted, even as right wing groups threatened action, namaz was not read in the area this week. @IndianExpress pic.twitter.com/68cb4Lu1Js

She also put out a photograph of the renewed protests by Hindu groups today saying: “Right wing groups fanned out across Gurgaon on Friday afternoon, acting on their threat of ensuring namaz is not read in vacant plots and parks in the city. Cyber Park & Sikanderpur were among the places they visited to prevent worshippers from reading namaz.”