With the situation spiralling out of control, police resorted to lathi charge initially and then opened fire at protestors. According to the police, the situation is now under control, as several parts of the city are under curfew. 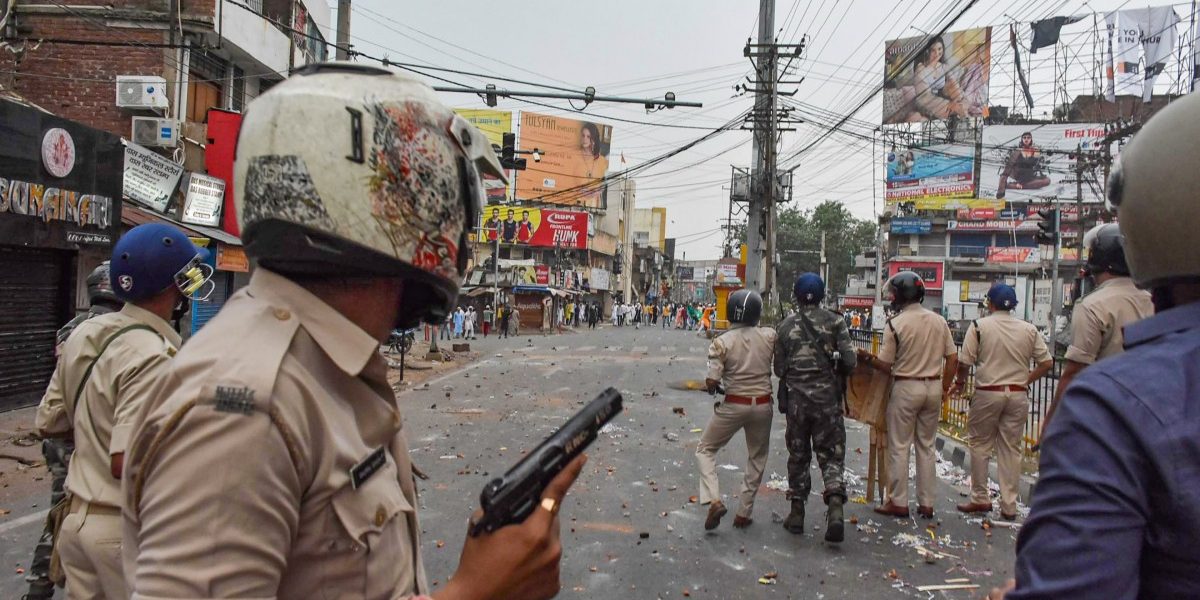 The peaceful protest spiralled out of control as a few protestors began pelting stones after the police attempted to disperse the crowd gathered near the Hanuman Mandir, which is just 150 meters away from Iqra Masjid on the main road.

Videos shared on social media show how in a bid to disperse crowds, amid reports of stone-pelting, police opened fire.

Senior superintendent of police Surendra Kumar Jha has suffered severe injuries. Curfew is enforced in different parts of the city, including on the Ranchi Main Road and in the Daily Market area.

The injured are currently being treated at the Rajendra Institute of Medical Sciences (RIMS), Ranchi. According to the latest information, at least 18 people suffered severe injuries in the firing. The deceased were identified as Mobasir of Islamnagar and Sahil of Christia Nagar on the Mahatama Gandhi Road. The families of both the victims confirmed their deaths. However, an official confirmation from authorities is still awaited.

The city saw two protest gatherings by Muslims after Friday prayers – one near Doranda Rasladarbaba’s Mazhar and the other near Iqra Masjid. While the first gathering turned into a procession from Mazhar to Rajendar Chowk, the second was a human chain.

People joined the human chain from Ratan Talkies and Hindpiri area, proceeding towards the Daily Market. Near the market, where the Hanuman Mandir is situated, stone-pelting took place, resulting in a face-off between police and protestors. To quell the pandemonium, the police first resorted to lathi-charge and then opened fire.

The primary plan of the protestors was to form a human chain near Iqra Masjid, but pelting stones was totally unanticipated. 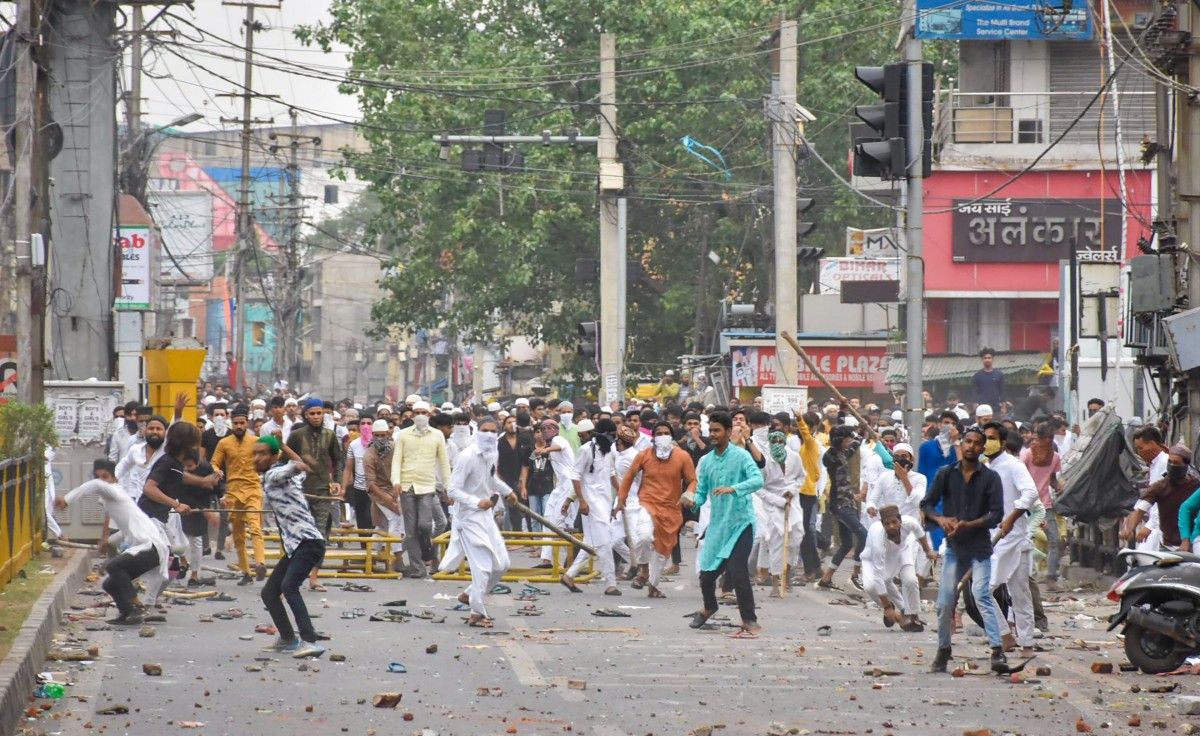 Miscreants throw stones on police during a protest over controversial remarks made by two now-suspended BJP leaders about Prophet Mohammad, in Ranchi, Friday, June 10, 2022. Photo: PTI.

Speaking on the situation on the ground, DIG Anish Gupta said that the situation is currently under control. He added that police have been trying their best to normalise the situation by deploying heavy police deployment all over the city.

Since the comments of Nupur Sharma on Prophet Mohammad resulted in international outrage, there has been a clamour for her arrest from across the country.

Against this backdrop, a call for Bharat Bandh was issued on June 10 by a social media handle from Ranchi without revealing the name of the organisation behind the call. It contained a poem saying that it is the time for Muslims to show the people who dishonour Prophet Mohammad that they are still alive. The Bandh call was not supported by any of the established Muslim organisations.

However, in the last couple of days, the situation in Ranchi has turned tense. Information has been going around the city for the past few days that after Friday prayers Muslims would protest demanding the arrest of Nupur Sharma and Naveen Jindal.

On Thursday night, a message was circulated on WhatsApp stating that there would be a protest near Phirayalal Chowk after Friday prayers without mentioning any organisation behind the protest call. Muslim organisations denied their involvement in circulating the message in question.

The location chosen for the proposed protest in the message is also strategically significant. Phirayalal Chowk is very close to Upper Bazar, which witnessed the horrific Ranchi riots of 1967, and is currently populated by businesses run by Hindus and Sikhs. The memories of the 1967 riots still haunt the Muslim survivors now living in different localities of the city.

One of the local Muslim activists, who didn’t want to be named, told that those messages could have been circulated to make the situation worse. He also added that the protestors proceeded toward the main road in a peaceful manner and there was no stone-pelting.

It is alleged that several fringe elements may have entered the procession and pelted the stones at the Hanuman Mandir to take advantage of the situation.

Few eyewitnesses even alleged the role of one Bhairav (Bhairo) Singh, one of the known history-sheeter and Hindutva leader of the locality in the whole incident. They accused him of provocation from being inside the temple.

It maybe recalled that in 2018 in Upper Bazaar, Singh ran a campaign against the Muslim shopkeepers saying that he would ensure that they left their shops. Coincidentally the call for the march on Friday was at the same place at Upper Bazaar-Phirayalal.

The general secretary of Markaz- e-Muslim-Ulema-e-Jharkhand and Imam, Iqra Masjid Obaidulah Qasmi, on Friday morning sent a message to the WhatsApp group ‘Aam Janta Help Line’ run by a few social activists. The message clarified that the protest call was not given by any Muslim authority. It also sought to drive home the point that the battle against Nupur Sharma is being fought legally at the national level and urged Muslims to maintain caution against any fake calls.

Explaining how the events unfolded Irfan Khan, state president of the Muslim League, present at the spot on Friday afternoon said, “After the conclusion of Juma Prayers in different mosques, protestors gathered at the main road area to register their protests. As they were proceeding further, there was a complete crackdown by the police, leading to several persons getting hurt. Close to 10 people are currently facing bullet injuries.” 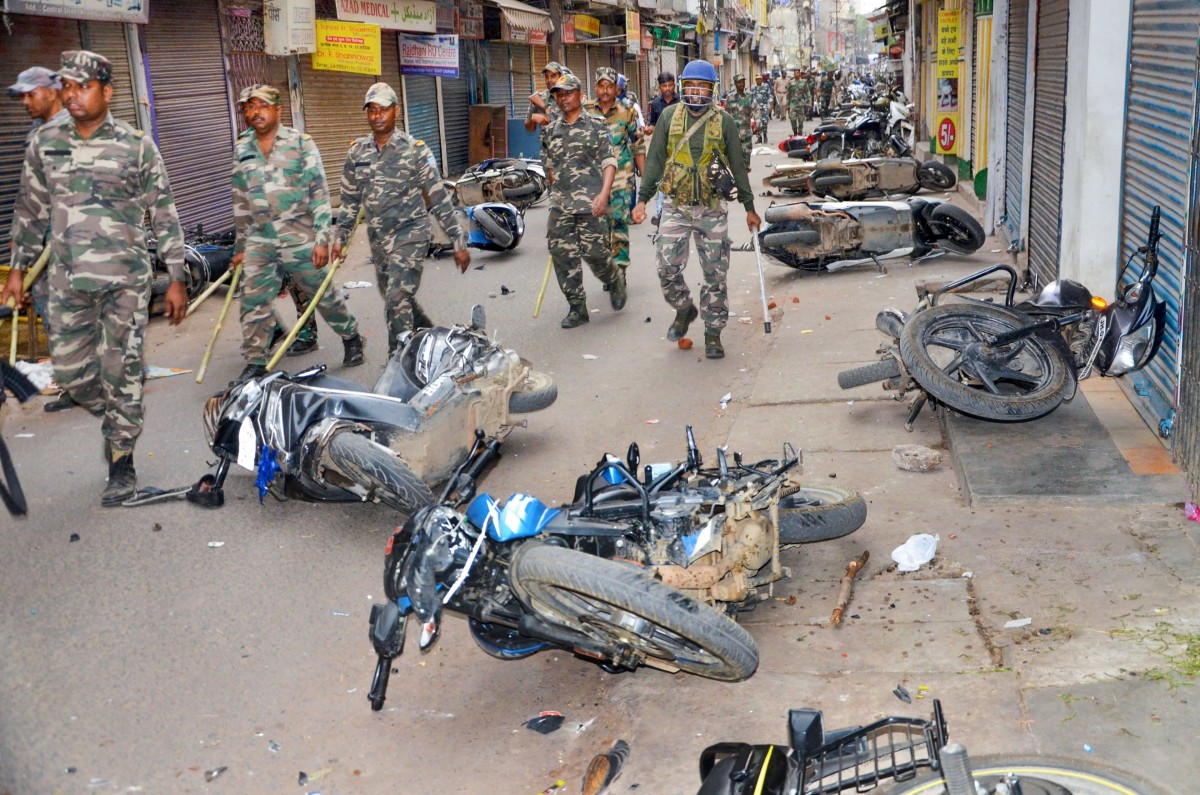 He added, “Three people are reportedly on a ventilator post the crackdown. This was a complete administrative failure. They could have used tear gas, pellet guns or water cannons. Why were automated guns and weapons used on civilians?”

Speaking to The Wire, Nadeem Khan, a member of the CPI (Marxist-Leninist) in Ranchi stated, “This is a complete administrative failure. The crowds could have been dispersed using a water cannon or tear gas shelling. However, this brutal crackdown has led to a person losing their lives and the number of deaths could increase.”

In a public statement, Jharkhand chief minister Hemant Soren stated that the violence in Ranchi was worrisome. Appealing for peace, he added that strict action will be taken against miscreants.

Currently, with the curfew being imposed, the situation is under control, but the environment is still tense.