'Sheikh Saheb, the Poison of Communalism is Penetrating our Educational System'

A letter written by filmmaker and freedom fighter Rajbans Khanna four decades ago calls on Sheikh Abdullah to lead the battle against anti-Muslim feelings in India. 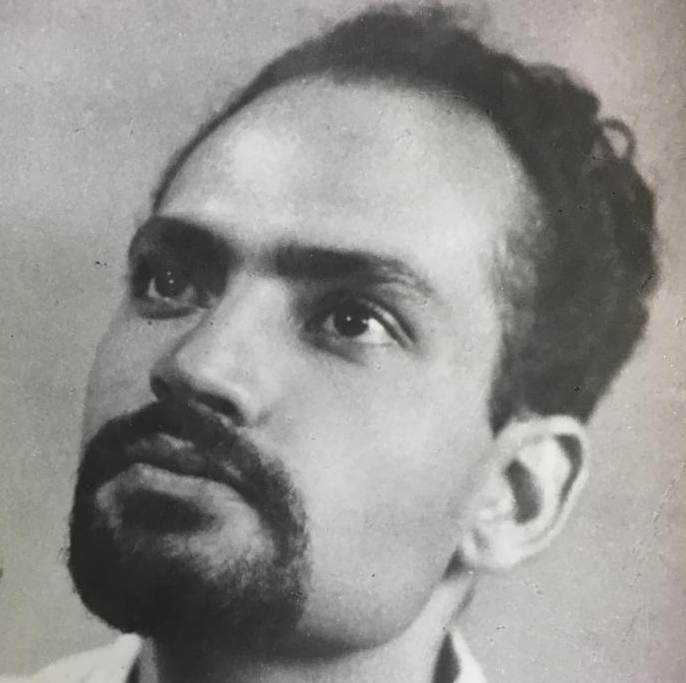 Sunday, August 11, marks the 100 birth anniversary of the late freedom fighter Rajbans Krishen Khanna, director of many award-winning political documentaries, including Gautama the Buddha, which had won the President’s Gold medal in India and a nomination and Special Mention for Best Director at the Cannes Film Festival in 1957.

In 1947, Khanna was invited by Sheikh Abdullah to help rebuild the organisation of the National Conference. In October that year, when Pakistani invaders crossed over into the state, he became a Commander in a Kashmir militia and later, a chairman of the Kashmir Cultural Front, tasked with organising Kashmir’s writers, poets and artists to inspire the people of Kashmir.

Khanna, who had been with the Communist Party of India in Lahore and then Kashmir, went on to make films in Bombay, but maintained his relationship with Kashmir, making several documentaries including The Story of Kashmir and The Rivers Will Not Forget.

Through it all, he maintained a lively correspondence with Sheikh Abdullah. Below are excerpts from a letter, written in 1980, which expresses alarm at the rising communalism targeting the state and Muslims in general.

Ever since the disastrous communal riots at Moradabad, I have been thinking how distressed and shocked a person like you must be to see that even 33 years after Independence we have not been able to achieve the religious tolerance and communal harmony for which you have fought for the last 50 years; for which Badshah Khan struggled with all his might, and for which Gandhi ji laid down his very life.

The cause of our failure in this most vital field lies, I think, in the fact that we have allowed our educational institutions, all over the country, to be penetrated with communal poison. Our schools and text-books are still giving the totally false and distorted picture of history, which the British imperialists handed down to us, a false and baseless picture of Hindus and Muslims fighting continuously against one another, and making no attempt to live in harmony and peace. Rajbans Khanna and his wife Usha in Kashmir. Photo: By special arrangement.

Also read: Through Art, Taking on the Misrepresentation of Muslims

Indeed so rich is the history of the contribution which Muslim saints, Muslim scholars and Muslim kings made to evolve a unified and harmonious culture in India; so inspiring is the history of the Muslim heroes who fought shoulder to shoulder with their Hindu brethren for the freedom of their motherland, that it is tragic that we do not give this true picture of our common history to our children, and still allow their minds to be poisoned by the distorted history which the British have left behind.

I think that the time has come when Sheikh Abdullah should make a decisive and lasting contribution for this urgent and vital task.

I suggest that Sheikh Abdullah and his government should set up immediately a “Sher-i-Kashmir Centre for National Integration”.

I am suggesting the name “Sher-i-Kashmir” for this Centre because I want people all over India to remember Sheikh Abdullah for the ideals for which he has fought and suffered all his life – the ideals of Hindu-Muslim unity; of religious harmony and secularism; an apostle of the true teaching of Islam, which teaches respect for all religions, universal brotherhood and democracy. Sura II – 136 of the Koran, which I read in Allana Yusuf Ali’s translation in Lahore many decades ago, comes to my mind:-

“Say ye: We believe
In God, and the revelation
Given to us, and to Abraham,
Ismail, Isaac, Jacob,
And the tribes, and given,
To Moses, and Jesus, and that given
To (all) Prophets from their Lord:
We make no difference
Between one Prophet and another,
And we bow to God in Islam.”

In order that the activities of the “Sher-i-Kashmir Centre for National Integration” may have an impact all over the country, I suggest that its headquarters should be in the house on Rouse Avenue, New Delhi, where Sheikh Abdullah was confined in exile for years.  I am suggesting Rouse Avenue because I want the entire country to remember the place where Sheikh Abdullah was imprisoned and exiled.

I suggest that this “Sher-i-Kashmir Centre for National Integration” should bring out a series of illustrated booklets and short educational films on all those periods of Indian history which show how the best elements amongst Hindus and Muslims have always joined hands with one another; have striven to evolve a common culture and have jointly contributed to the enrichment of all aspects of Indian life.

The Centre should see that these illustrated booklets are sent to every school and every library throughout India, and the short films are screened through the films division and through field publicity units throughout the country.

There are so many subjects on which these illustrated booklets and short films can be made, that it is impossible to list them in one brief note. But to give just a few examples :- 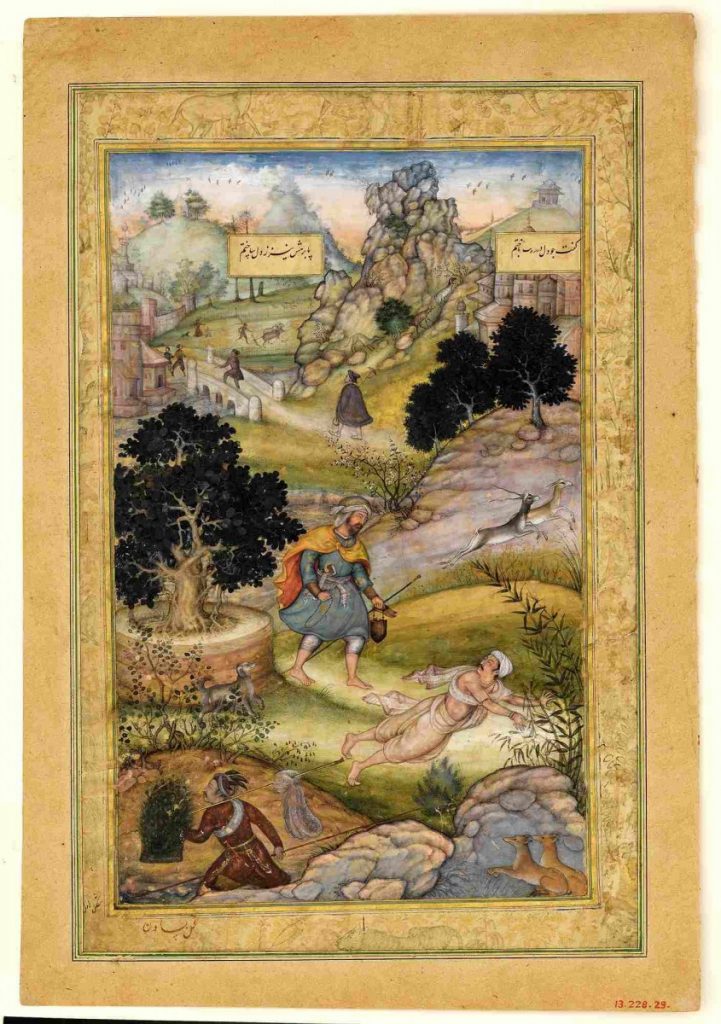 In this folio from a quintet by Amir Khusro, a Muslim pilgrim learns a lesson in piety from a Brahman. Photo: Wikimedia Commons

1) The teachings of the Sufi Saints, of Hazrat Nizam-ud-Din Aulia, of Khwaja Moin-ud-Din Chishti, of Syed Jalal-ud-Din Bukhari and Baba Fareed, all of whom helped to bring about a great fusion of Hindu and Muslim religious thought and brought the two communities closer together.

2) The teachings of the Bhakti Saints who derived their inspiration really from the Sufi Saints and from the spirit of equality and universal brotherhood preached by Islam – Kabir, Nanak, Tulsi, Raidas, Namdev, Narsi Mehta, Tukaram, Vidyapati, Meera and Lalla of Kashmir.

3) The life of Dara Shikhoh who translated 52 Upanishads from Sanskrit into Persian, and wrote his monumental work, Majma-ul-Bahrein, the ‘Meeting of the Two Oceans,’ bringing out the common points between Vedantism and Sufism.

4) The Muslim poets who wrote in Hindi and whose excellent Hindi poetry has become the common heritage of both Hindus and Muslims. Poets such as Amir Khusro, Jayasi, Abdur Rahim Khan Khana, Masood, Qutab Ali, Akram Mohd. Shah, Anees and Dabir.

5) Naquib Khan who translated the Mahabharata into Persian.

6) Nawaz, who with the encouragement of emperor Faroukh Sajjar, translated Shakuntala into Urdu.

The history of Hindu-Muslim unity in all fields of human endeavour is so rich in our country that it is impossible to mention all of them in one brief letter or note. But I am sure you will agree that these films and booklets on this rich history will open the eyes of the modern generation and will combat the communal poison which misguided fanatics are trying to instil into their minds.  The work which “Sher-i-Kashmir Centre for National Integration” can do to educate our people on secular lines, would be of such lasting value that it will be remembered by the entire country for generations to come.

This letter has been edited for length and clarity.