Since there is no law that prescribes the death penalty for men who marry their wives on false pretences, the UP chief minister's reference to funerals sounds like a call to vigilante violence. 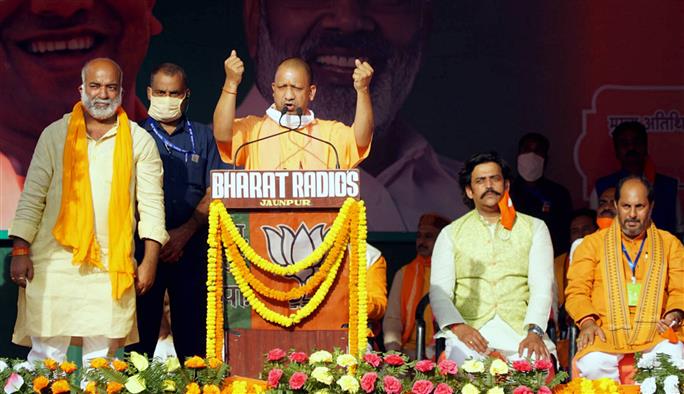 New Delhi: In his most menacing comments to date on Hindu-Muslim romance and marriage, Uttar Pradesh chief minister Yogi Adityanath on Saturday warned men who “hide their identities” and “play with the honour of daughters and sisters” to get ready for their own funerals.

Speaking at a BJP election rally in Jaunpur, Adityanath referred to a recent Allahabad high court judgment which said that if an individual converted to another religion purely in order to marry, that conversion would not be valid, and then said, “This is why our government has decided that we will act to stop love jihad in a firm way”.

‘Love jihad’ is the term Hindutva politicians have coined and use to describe an imaginary conspiracy they themselves conjured up in which Muslim men supposedly dupe unsuspecting Hindu girls into marriage in order to convert them to Islam. In more fanciful versions of this conspiracy theory, this is said to be part of a grand and secret plan of eventually turning Hindus — who are 85% of the population — into a minority in India.

Ironically, the judgment Adityanath referred to had nothing to do with allegations of love jihad but pertained to the request a Muslim woman and Hindu man – who married of their own free will – had made for protection in the face of opposition from their families. The court, however, declined to direct the state to stop interfering with their “peaceful married life” since the woman had converted to Hinduism purely in order to get married.

Though the case had nothing to do with ‘love jihad’, the chief minister made a reference to the court’s judgment in order to play on insecurities the Bharatiya Janata Party has been stoking for some time in UP of Hindu women falling in love with Muslim men.  Speaking in Hindi, he said:

“We will bring an effective law – those who hide their name and identity and play with the honour of daughters and sisters, I am warning them in advance: If they don’t stop, their funeral processions will be taken out,” he said

While he used the phrase ‘Ram naam satya hai’ – which Hindu mourners traditionally chant while taking a body for its last rites – Adityanath’s reference to “love jihad” made it very clear the bodies would be that of Muslim men.

Since there is no law by which someone can be lawfully put to death for marrying a woman on the basis of a concealed identity, the chief minister’s reference to funerals is tantamount to encouraging vigilantes to resort to mob violence.

As chief minister and home minister, Adityanath knows there have been documented instances of Muslim men being attacked and killed by mobs in Uttar Pradesh because of inter-religious romances and marriages.

In August, the Adityanath government said it was preparing an ordinance and “action plan” to prevent “love jihad”, though it is not clear how this term is to be defined.

Whatever the government’s next steps, it is clear that inter-religious romance in the state will become an increasingly risky proposition for young couples.

Given the threat such couples face from disgruntled members of their family not just in Uttar Pradesh but others parts of India, it is customary for the police and courts to take steps to ensure their physical safety. But in UP, with the police in Kanpur running a ‘special investigation team’ to probe so-called ‘love jihad’ and the courts too – as evidenced by the latest Allahabad high court ruling which Adityanath cited – reluctant to intervene, the danger of vigilante violence will be much higher.

Unlike Madhya Pradesh and nine other states, Uttar Pradesh does not have a law outlawing religious conversion. Last year, the UP State Law Commission submitted a report to the Adityanath government making the case for such a law and included a draft statute, the UP Freedom of Religion Bill. Cover of the 8th Report of UP Law Commission on Religion, 2019. The cover image reproduces an illustration from hindujagruti.org, which stands for “the establishment of the Hindu Rashtra”.

While the draft law broadly copies the provisions that other states have adopted of outlawing forced conversions or those induced by allurements of one kind or another, it also proscribes religious conversion for the sake of marriage – a provision only found in the Uttarakhand law enacted in 2017.

The law commission report’s cover illustration and another image inside are taken from hindujagruti.org, a website that says it stands for “the establishment of the Hindu rashtra“. And the report seems overly concerned about inter-religious marriages:

“Therefore to curb such practice it is necessary to make a provision to declare null and void such marriages where conversion was done for sole purpose of marriage and like other matrimonial disputes, jurisdiction should be given to Family Court or where Family Court is not established to the Court having jurisdiction to try such cases. Liberty should be given to either parties to present the petition in the competent court.

In short, the proposal is that inter-religious marriages where either spouse converts will necessarily have to have the imprimatur of the court.

Courts have a locus to adjudicate on the religious identity of married couples only if the dispute before them pertains to family law-related questions.

In the landmark Lily Thomas case which the Supreme Court decided in 2000, a complaint  was brought to it by the Hindu wife of a Hindu man who was going to convert to Islam in order to marry a second (Hindu) woman. The court ruled that an insincere and  opportunistic conversion effected solely to get around the Hindu personal law ban on bigamy would not allow the man to claim the ‘benefits’ of Muslim personal law.

However, the recent case before the Allahabad high court had no such dimension. The Muslim woman did convert to Hinduism and the couple solemnised their marriage under Hindu rituals, but their need for protection from vindictive family members would have been just as acute if they had had a civil marriage under the Special Marriage Act.