When Rabbits Are Impressed by the 'Simplicity' of the Wolf

What does the meeting between eminent Muslims and the chief of an Islamophobic organisation mean for the onward march of Hindutva? 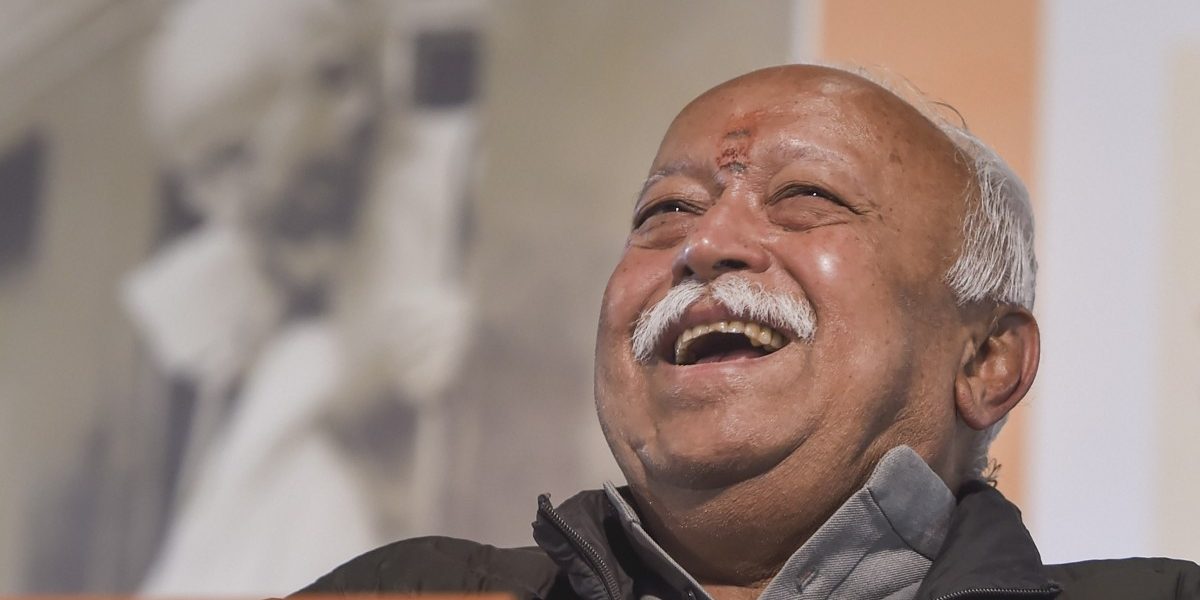 Some eminent Muslims recently met Mohan Bhagwat, chief of the Rashtriya Swayamsevak Sangh (RSS). Their eminence has a lot to do with the high positions some of them held in the state apparatus – one is a former chief election commissioner, another a former lieutenant governor of Delhi, a third a deputy chief of the army.

The person they met is also eminent, though he does not hold any office in the government. He heads an organisation which is now running the Indian state, through its members like Prime Minister Narendra Modi and others.

Last week, the eminent Muslims provided some information about their meeting with Bhagwat. Through newspaper articles and video interviews, they went to town explaining the significance of the visit and why they thought it necessary to engage with him.

Curiously, the eminent person they visited didn’t feel it necessary to say a word about this meeting. As an aide explained, “All kinds of people come to see him”. In other words, this interaction was one such meeting and should not be read into much.

This itself explains who was more eager to meet whom.

The eminent Muslims informed the media that their conversation with the RSS supremo was very positive. Bhagwat listened to them silently, without any interruption. His attention convinced them that he was really serious about their words.

Why, he even laughed on one occasion when, apparently, they explained why Muslims cannot procreate in large numbers – a charge often levelled against the community by the RSS – with the collective aim of outnumbering Hindus. Bhagwat’s laughter meant that he had noted this important point too.

So, what does this mean? From tomorrow, will the RSS will stop telling Hindus that Muslims are conspiring to expand their population? Will each Muslim born should not be seen as a threat to Hindus?

Bhagwat’s visitors were greatly impressed by the fact that the room of the Sangh pramukh was very simple. He was also very punctual. That his simplicity and punctuality were extraordinary to them shows how these qualities have become rare in their and our lives. On the other hand, it also tells you that by possessing the qualities of simplicity, discipline, humility, and so on, you can get a license to propagate the ideology of hate.

Gandhi, who also lived a punctual and simple life, was not at all confused by the simplicity and discipline demonstrated in the shakhas of the RSS. Discipline was also a virtue of the Nazis, he warned his friends.

This meeting has been treated as a major event, possibly because the visitors to the chief of an Islamophobic organisation happen to be Muslims, but more so because they are former bureaucrats, army officers and journalists. Their eminence made this meeting important. They have worked in decisive positions for the Indian state.

Did the delegation know that this very eminence is seen as a threat by the RSS and did they raise this matter with Bhagwat? The report adopted in March, 2022, by the Akhil Bharatiya Pratinidhi Sabha – the Sangh’s highest decision-making body – expressed concern over a sinister conspiracy by a ‘particular community’ to infiltrate the government machinery. Those who went to meet the RSS chief belong to that same ‘particular community’ that the Sangh was talking about, without taking its name. They are, in the eyes of the Sangh, early ‘infiltrators’. And the RSS does not want more like them in the state machinery.

The Sangh’s report is exactly what Sudarshan News had claimed two years ago. It accused Muslims of ‘UPSC jihad’, ‘job jihad’ and also ‘education jihad’. Muslims are conspiring to infiltrate the government machinery by cornering government jobs – this is the poison the channel tried to spread before the Supreme Court, in September, 2020, ordered it to stop.

Yet, a year-and-a-half later, the RSS, in a formal written report, repeats this bogus charge. The Sangh objects to the creation of a Muslim middle-class because middle-classes can be vocal and will speak on behalf of not just themselves, but the wider society, too.

The Sangh does not want Muslims to reach decision-making positions in Indian society. They should, instead, be subordinate to Hindus and live their lives according to the wishes of the RSS. If the RSS has its way, Muslims will not be allowed eminence. Had the RSS been as powerful a few decades ago as they are now, the five eminent Muslims who met Bhagwat would never have been allowed to reach the positions they did in the first place.

We don’t know if this theme ever came up in the discussion. But we are told that this was only the beginning of a process. So, hopefully in their next meeting, the five will consider requesting the RSS to withdraw their report.

We have been told that the Sangh chief is upset that Muslims call Hindus ‘kafirs’. In my long life – and I have been brought up in a Muslim locality – I do not remember any Muslim calling me a kafir. On the contrary, many Muslims remember the innumerable derogatory words that have been and are being used for them in schools, on the street, in offices. I don’t know whether this delegation complained about why Muslims are addressed like this. Or did the RSS chief laugh when it was, if at all, mentioned?

Hindus feel bad that Muslims eat beef, Bhagwat apparently told his visitors. The team agreed and said that Muslims could avail of other sources of protein. They said that already in many states, laws against cow slaughter are in force and Muslims should respect the sentiments of Hindus and follow the law.

One wonders if they asked why the Sangh and the Bharatiya Janata Party (BJP) do not open their mouths on the consumption of beef in states like Kerala, Goa and Nagaland. It is clear from this that the Sangh’s love of the cow is only an excuse to spread hatred against Muslims and justify violence. Besides, it is not Muslims alone who eat beef. There are numerous communities in the Hindu fold who do so too.

The RSS knows that now, it is very difficult to act like Hitler. The idea of a ‘Final Solution’ may be attractive, but it is impractical and costly. The best and cheapest solution is to turn Muslims into second-class citizens forever.

I remember a remark by an RSS intellectual in a TV discussion a few years back. The occasion was Muharram. We were talking after an incident in Delhi in which Muslims were prevented from bringing a Tazia to the square of a locality in Delhi. The RSS intellectual said, in a very humble manner, that Muslims would have freedom in India but with some restrictions. As long as they stay within that limit, they will have no problem.

The RSS knows Germany’s model can’t be repeated. It is better to turn Muslims and Christians into permanently subjugated populations, who agree to live according to the way of life prescribed by the Sangh. If they want to ensure that hot-headed organisations like the Vishwa Hindu Parishad or Bajrang Dal don’t use violence against them, Muslims should stop doing things that make Hindus run out of patience.

We are told that the delegation has managed to get some assurance that Muslims would not be lynched. One of its members has also accepted that India is a Hindu Rashtra. However, the problem before this delegation – and the RSS – is that majority of Muslims are still fighting with all their resources to reclaim the republic. They have not given up on the idea of a secular India where they have equal rights.