"The anxiety over women entering into marriages of choice has deep-seated patriarchal and casteist roots, wherein a woman is perceived as property, and handed over from her parents to her husband’s family, safely within the community and caste, with little say in the matter." 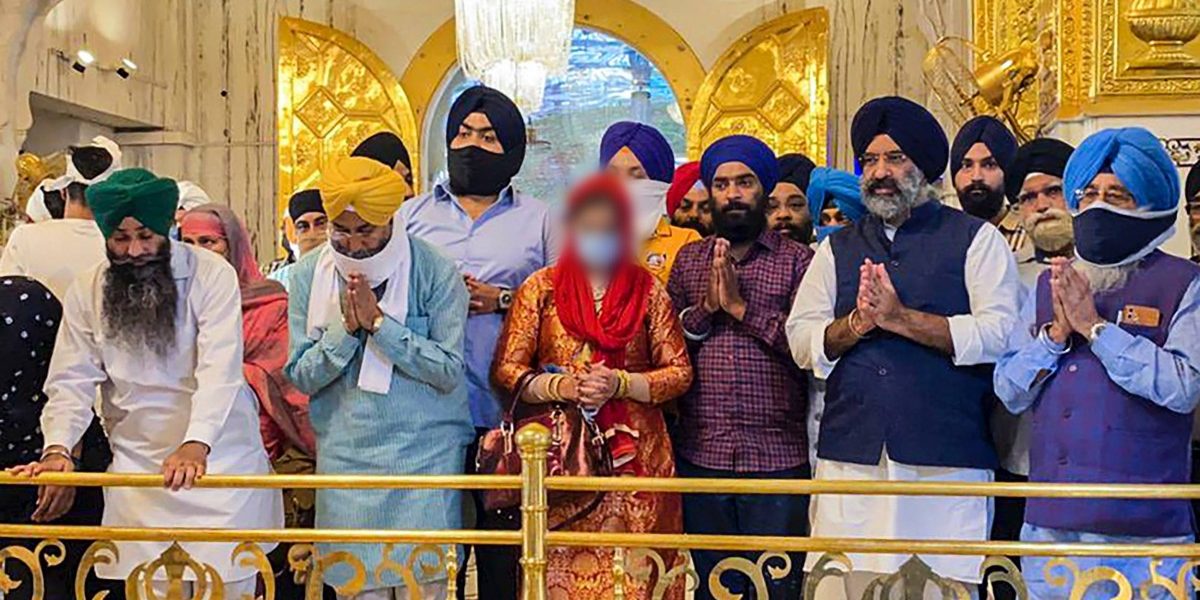 The 18-year-old Sikh woman from Kashmir who was brought to Delhi by 'community leaders'. Photo: PTI

New Delhi: A group of Punjabi writers, social activists, academics, public intellectuals and others have issued a statement expressing concern over what some community leaders have recently said about Sikh women marrying Muslim men.

Two recent marriages between Sikh women and Muslim men have become controversial, with one woman publicly stating that she married the Muslim man of her own volition, and another Sikh woman being quickly married off to a Sikh man to “save” her.

The signatories say that several Sikh women have married Muslim men in the past. Women who marry men from another religion or even choose to convert cannot be called victims of so-called ‘love jihad’, they say, as they are adults who can make their own decisions.

“The anxiety over women entering into marriages of choice has deep-seated patriarchal and casteist roots, wherein a woman is perceived as property, and handed over from her parents to her husband’s family, safely within the community and caste, with little say in the matter,” they say.

As a religious minority in Kashmir, the signatories say, it is true that Sikhs face various forms of neglect. “This is a struggle which must be waged for the rights of the Kashmiri Sikh minority. But the struggle must be premised on a commitment to the equal rights of all  castes, classes and genders in the Kashmiri Sikh community,” they argue.

What is happening now, however, is objectionable because “self-proclaimed leaders of the Sikh community do not have the right to speak on behalf of the whole community”.

The signatories see a more sinister hand behind the recent developments. “We are convinced that this controversy has been fuelled to create a wedge between the Sikh and Muslim communities who have been forming new alliances across India to fight together against the communal and authoritarian agendas of the state.” Sikhs and Muslims have recently come together on various issues including the farmers’ protests and anti-Citizenship (Amendment) Act movement.

We, the undersigned, express our deep concern over the recent turn of events around young adult Kashmiri Sikh women who married Muslim men, and often converted to Islam, after exercising their own free will in choosing their partners. However, they are being portrayed by self-proclaimed leaders of the Sikh community as victims of ‘love jihad’.

The prominent Delhi-based Sikh leaders, who arrived in Srinagar on June 26 to add fuel to the fire, alleging a blatant and deliberately provocative lie that the women were “abducted at gunpoint and married to older Muslim men.” They appropriated the centre stage, sidelining even the local Kashmiri Sikh community leadership, leaving them bewildered at the turn of events. Later, they claimed to have approached the Home Minister Amit Shah urging him to intervene and pass an anti-conversion Law in Kashmir.

Young Indians of all faiths, and this includes Sikh women, are increasingly seeking freedom to work, pursue studies, marry who they choose, and live life on their own terms. The anxiety over women entering into marriages of choice has deep-seated patriarchal and casteist roots, wherein a woman is perceived as property, and handed over from her parents to her husband’s family, safely within the community and caste, with little say in the matter. In a video released by one of the Sikh women, she asserts that she converted and married her husband by choice, but her consent and agency were accorded little value, not only by the community leaders but also by the police. She was forcefully “recovered” (like stolen property) to the custody of her parents, and she will have to fight a long and hard battle to be reunited with her husband.

We do recognise that Sikhs are a religious minority in Kashmir, and they face multiple forms of neglect ranging from non-recognition of Punjabi language in the state to little representation in Kashmir’s political, cultural and economic spheres. This is a struggle which must be waged for the rights of the Kashmiri Sikh minority. But the struggle must be premised on a commitment to the equal rights of all  castes, classes and genders in the Kashmiri Sikh community.  We are also aware that religious conversion is often the main route available for inter-faith unions in the state, and that inter-faith marriages without religious conversion under the Special Marriage Act has not gained the social acceptance it should. This is often because the Special Marriage Law is almost impossible to access, requires a long waiting period, and leads to community policing and a violent reaction by the family and community of the young woman choosing to marry of her own choice. Nevertheless, we believe that the solution to these challenges lies in working towards building a better society, one in which women may freely exercise their choice about who and how to marry (with or without religious conversion), and  be assured that their decisions are respected by all communities in the state, including the Muslim majority community.

The anti-conversion law and the attention which the Delhi-based Sikh community leaders are seeking from the Home Minister has nothing to do with preserving religion or linguistic rights.  Rather, it is premised on antiquated appeals to ‘community honour’ and the ownership of women as ‘community property’. The anti-conversion law is glaringly communal and is often used with the intent to criminalise young Muslim men who are in relationships with women of other faiths.  The real victims of this law are women as the law infringes their constitutional right to choose a partner. If there is a specific case of abduction irrespective of the religion or caste of the suspected abductee or abductor, it should be probed. Abduction is equally an infringement of freedom of choice of the victim of abduction.

We find the recent action, under the direction of these so-called Sikh community leaders, of abducting a young Kashmiri Sikh woman and marrying her off within twenty-four hours to a stranger, whose only qualification is that he is from her community, totally reprehensible.  This gharwapsi executed under the patronage of Sikh men claiming the legitimacy of being community leaders is not only unlawful, but it infantilises the legitimate choice made by an adult woman who voluntarily chose to opt for a way of life by converting her religion to her spouse’s.

We are convinced that this controversy has been fuelled to create a wedge between the Sikh and Muslim communities who have been forming new alliances across India to fight together against the communal and authoritarian agendas of the state.  A large majority of farmers from Punjab opposed the highly discriminatory CAA, and they came to the peaceful protest in Shaheen Bagh in solidarity with the protestors.  The Punjab farmers unions supported the anti-CAA demonstration in Malerkotla, and the Muslim farmers of Malerkotla and Western Uttar Pradesh are present at the Delhi borders to fight for the repeal of the three farm laws.  Farmers unions have expressed regret for the communal violence in 2013 in Western Uttar Pradesh that targeted and uprooted Muslims. Farmers unions also held big rallies in Mewat recently where two Muslim men were lynched in two separate incidents by violent Hindu vigilante groups, to reaffirm their commitment to fighting together the battle not only against the farm laws but also against other injustices.

In this context, we – writers, scholars, poets, artistes and cultural workers – affirm that the self-proclaimed leaders of the Sikh community do not have the right to speak on behalf of the whole community. Sikh tradition does not believe in taking away the right of others, least of all of its women. We believe that an individual’s right to choice in friendship, love and marriage, and the right to practice a religion of one’s belief, is an inalienable right which belongs equally to our women citizens.  We unequivocally reject conspiracy theories such as ‘love jihad’ as divisive, built on fake news, and designed to foster hatred and suspicion between religious communities. We oppose strongly the demand for an anti-conversion law in Kashmir or anywhere in the country. We regret deeply the statement of Akal Takht jathedar Giani Harpreeet Singh, and his letter to the Lt Governor of Kashmir asking him to introduce an anti-conversion law in the state. Such laws have only contributed to deepening communal fault lines, instilling fear among Muslims, and made it tougher for inter-faith couples to exercise their choice.

We also urge these Sikh leaders not to repeatedly bring up Sikh’s service, langar and contribution in Kashmir at the time of floods or earthquake to proclaim the magnanimity of Sikhs. Such self-aggrandisement is against the tenets of Sikhism and extremely undignified.

No community is entitled to be close-minded or use means at their disposal to browbeat and block young people, especially women, if they exercise choice in love and marriage.  We urge the self-proclaimed Sikh community leaders to desist from playing divisive politics and perpetrating emotional violence on individuals making independent personal choices.

We offer our solidarity to all individuals who seek to choose their own partners and way of life. We pledge our support to those being victimised by community leaders and families who seek to deny them autonomy in the name of preserving religious values.