Protesters and police allegedly clashed in some places like Howrah, Ranchi and Prayagraj while other cities saw peaceful gatherings. 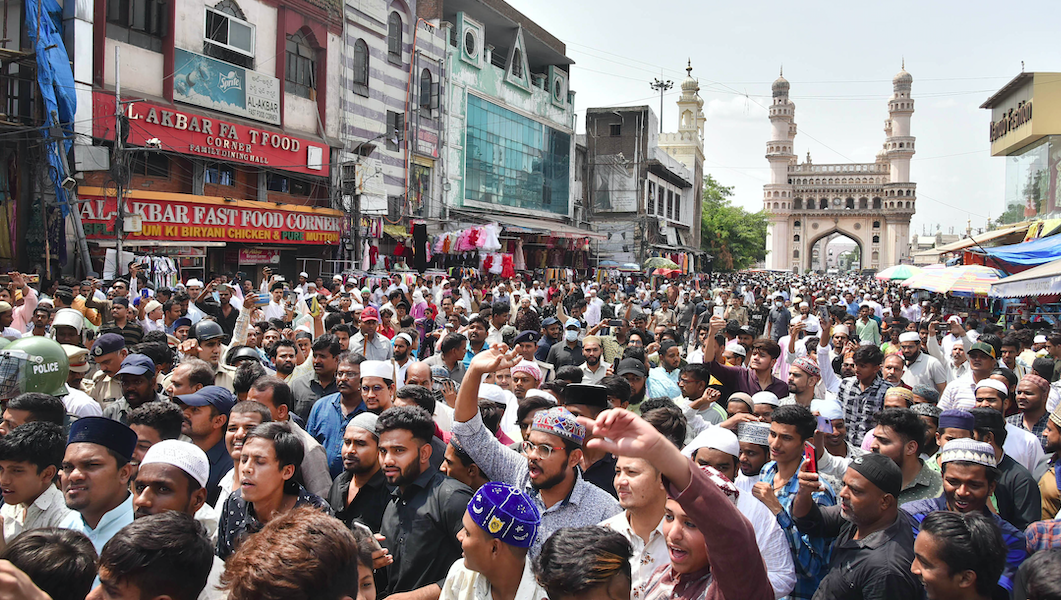 New Delhi: Protests were seen outside the Jama Masjid in New Delhi, in Uttar Pradesh’s Saharanpur, in Kolkata’s Park Circus area and other cities across India demanding action against BJP leaders Nupur Sharma and Naveen Jindal for their remarks against Prophet Mohammad.

Uttar Pradesh police have made arrests from among protesters.

A crowd of people gathered on the steps of the Jama Masjid, carrying placards and shouting slogans against Sharma, the former national spokesperson of the party, and Naveen Jindal, former head of the Delhi BJP’s media unit.

According to senior police officials, the protest was held peacefully on the stairs near gate number one of the mosque, and it lasted for around 15 to 20 minutes. Protesters dispersed from the area later.

No call for protest given by Masjid, says Shahi Imam of Jama Masjid. pic.twitter.com/Kysiz4SdxH

Protests broke out at several places in the state after Friday prayers, according to reports and social media updates.

A senior official at the Uttar Pradesh Police headquarters in Lucknow said sloganeering took place in Saharanpur, Moradabad, Rampur and Lucknow. Protesters have reported that police used force in places against crowds.

Police has, in turn, alleged that protesters pelted stones at the Atala area of Prayagraj. Additional Director General (Law and Order) Prashant Kumar said, “The reports of stone-pelting in Prayagraj are being looked into.”

A video, purportedly from the Prayagraj protests, shows a crowd throwing stones and police in protective gear throwing them back at people at a distance.

Latest reports have it that the ADG’s car was attacked by protesters in Prayagraj. 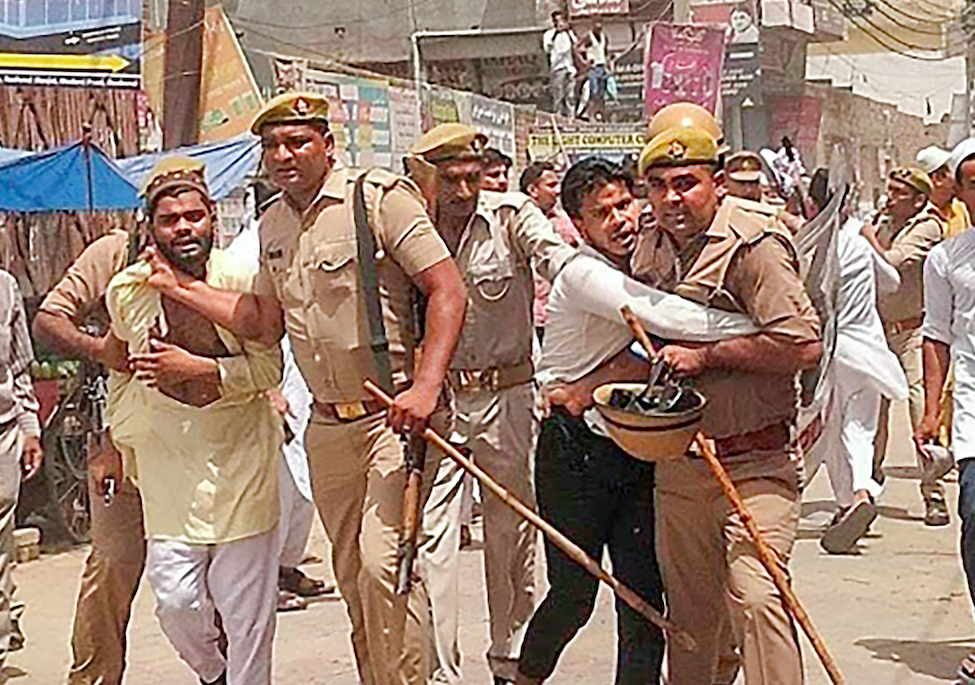 Police with protesters at Saharanpur on Friday, June 10, 2022. Photo: PTI

The Wire has learnt that at Saharanpur police and crowds pelted stones at each other and there was lathicharge. As many as 21 people have been arrested for taking part in protests “without permission,” Saharanpur SSP Akash Tomar tweeted.

21 people have been arrested in Saharanpur district for taking part in protest without permission ! Arrests still going on ! @saharanpurpol

Saharanpur DM Akhilesh Singh said, “The namaz was offered peacefully at the Jama Masjid in Saharanpur, after which people raised slogans against Nupur Sharma and moved towards Ghanta Ghar. The crowds have now been dispersed.”

Reports of similar protests in Deoband have been dismissed by authorities.

People in Saharanpur city (not deoband) had gathered for protest without permission. They have been dispersed by police. FIR is being registered and strict action will be taken. @saharanpurpol

ADG Kumar said Friday prayers were held peacefully in most places across the state.

Violence had erupted in parts of Kanpur last week over the same issue. The Wire has reported on how, in the aftermath of the clashes, police has allegedly been targeting Muslims.

Protestors set the BJP office in Howrah’s Panchla, West Bengal, on fire on Friday, June 10, over inflammatory remarks against Prophet Mohammed, the Quint has reported.

Taking to Twitter, BJP worker Amit Thakur said, “The Bhartiya Janata Party office is a place of worship for us, today thousand of mad fundamentalist have came and set fire to that place of worship.”

Large crowds gathered at Panchla and Domjur of Howrah and Kolkata’s Park Circus for the second day of protests today.

Local media has reported that Howrah protesters pelted stones at police vehicles and were tear gassed by police in return.

A day ago, chief minister Mamata Banerjee had condemned the remarks against the Prophet and also asked demonstrators who had put up road blockades in several places to “go protest in New Delhi and BJP-ruled states instead.”

“Road blockades are going on since morning in some places and people are suffering. I will request you (protestors) on behalf of the common people to call off the blockades as nothing has happened in West Bengal. Go to New Delhi and protest, where there is a BJP government. Go to Gujarat and UP,” Banerjee said at the state secretariat.

Banerjee also appealed to people to maintain calm in the larger interest of the nation.

“At the same time, I appeal to all my brothers and sisters from all castes, creeds, religions, and communities to maintain peace in the larger interest of the common people, despite the provocation which we so strongly condemn,” she said in a Twitter post.

Some policemen were injured in Ranchi while trying to control a crowd near the Hanuman Temple, situated on Ranchi’s Main Road, during protests demanding Sharma’s arrest, police have claimed.

Police fired in the air and lathicharged at the mob which allegedly pelted stones and shouted slogans.

Peaceful protests were held at areas of Srinagar, including Lal Chowk, Batamaloo, Tengpora and other places.

Authorities had snapped internet on mobile phones in Srinagar.

The Hurriyat Conference headed by Mirwaiz Umar Farooq, while condemning the repeated closure of the historic Jamia Masjid in Srinagar for Friday prayers by the authorities, alleged that anti-Kashmir and anti-Muslim measures are a hallmark of the central rule.

“Deliberately hurting the sentiments of Muslims across the world including in J-K to appease their constituency across India, these people by using derogatory language against Islam and the holy Prophet (PBUH) pronounce their hatred for both and wear it like a badge on their sleeve,” the Hurriyat said in a statement.

“In their harshness towards Muslims, they do not even allow us to raise our voice against such bigotry and hatred that causes us so much pain,” it said.

The amalgam said the Hurriyat strongly denounces the derogatory remarks made against the Prophet.

Solapur and Navi Mumbai saw large and peaceful marches according to reports.

#WATCH | Maharashtra: A large number of people carry out a protest march in Solapur against the controversial remarks by suspended BJP leader Nupur Sharma. pic.twitter.com/dVpwrq0r3G

Protests broke out in several parts of Hyderabad, including in the Old City of Hyderabad, where peaceful crowds gathered outside Mecca Masjid after Friday prayers.

Police resorted to baton charge in Mehidipatnam to foil the attempts of protestors to take out a huge rally from Masjid E Azizia at Humayun Nagar, according to reports.

The state government deployed police personnel in large numbers, according to Siasat Daily.