Police have been deployed in large numbers in Maharashtra to prevent law and order issues. Mumbai police has also served Thackeray a notice under Section 149 of the CrPC, related to preventing cognizable offences. 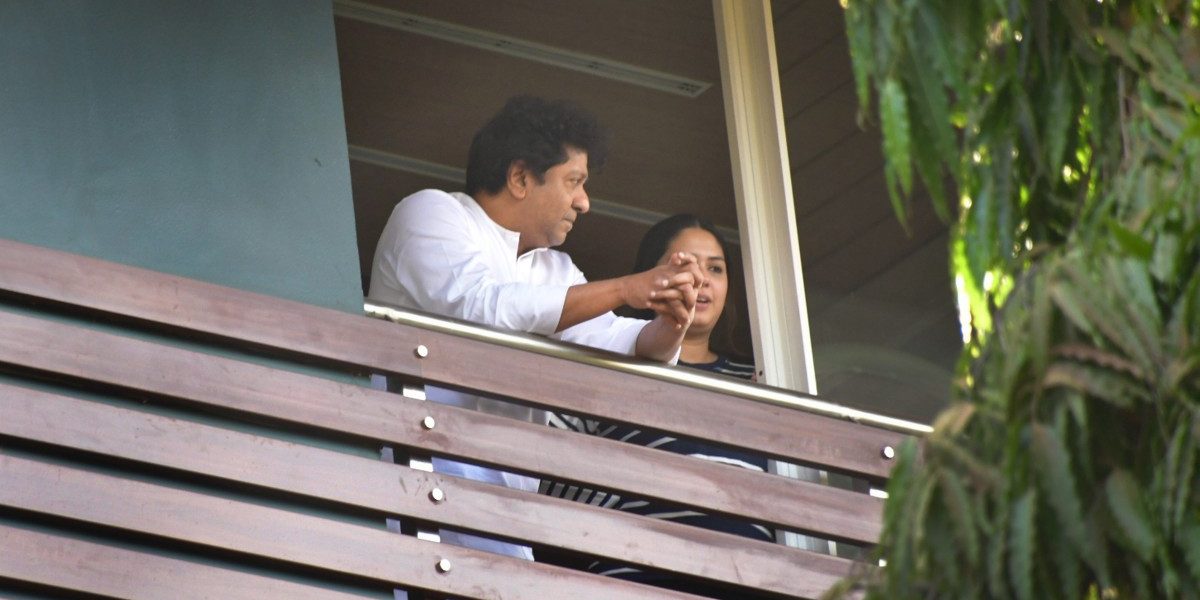 aharashtra Navnirman Sena (MNS) President Raj Thackeray with his daughter at his Shivteerth residence in Mumbai, Tuesday, May 3, 2022. A case has been registered against Thackeray over his alleged inflammatory speech at a rally in Aurangabad on Sunday. Photo: PTI

New Delhi: Members of Raj Thackeray’s Maharashtra Navnirman Sena played the Hanuman Chalisa on a loudspeaker near a mosque in the Charkop area of Mumbai on Wednesday morning, even as Maharashtra police registered an offence against Thackeray over a “provocative” speech he delivered on the topic on May 1.

Thackeray has given repeated calls to MNS workers to protest against loudspeakers playing azaan or the Islamic call to prayer.

A court in western Maharashtra’s Sangli district has also issued a non-bailable warrant against Thackeray in connection with a 14-year-old case.

In addition, Mumbai police has served him a notice under Section 149 of the Code of Criminal Procedure, related to preventing cognizable offences, as a precautionary measure.

Police have issued precautionary notices under various sections of the CrPC to more than 300 people in the Central Mumbai region, including prominent MNS leaders. The number of MNS workers who have been served police notices across the state is over 75,000.

News18 has reported that Thackeray has lined up 2,000 lawyers to fight legal cases if MNS workers are booked.

As some MNS leaders threatened to hit the streets if further action is taken against their leader, the Shiv Sena, part of Maharashtra’s ruling coalition, said the state does not run on ultimatums and that the rule of law prevails.

The police in Aurangabad on Tuesday registered a case against Raj Thackeray, two days after he called for silencing loudspeakers atop mosques from May 4.

The 53-year-old politician was booked under sections 153 (wantonly giving provocation with intent to cause riot), 116 (abetment of offence punishable with imprisonment if offence be not committed) and 117 (abetting commission of offence by the public or by more than 10 persons) of the Indian Penal Code and provisions of the Maharashtra Police Act.

In the Aurangabad rally on May 1, the MNS chief had asked people to play the Hanuman Chalisa outside mosques from May 4 if loudspeakers playing the azaan were not removed. On Wednesday evening, he repeated the call.

In an open letter, he asked people to lodge a complaint with the police by dialing 100 if they are distributed by the sound of azaan.

“One must complain daily,” the MNS leader said. “I appeal to all Hindus that tomorrow, the 4th of May, if you hear the loudspeaker blaring with azaan; in those places, play Hanuman Chalisa on loudspeakers. That’s when they will realise the hindrance of these loudspeakers,” Thackeray said in the letter.

In a video, an MNS worker, holding the party flag, was seen playing the Hanuman Chalisa on a loudspeaker from a high-rise in Mumbai. In the background, the azaan could be heard.

In neighbouring Thane city, some MNS activists played the Hanuman Chalisa on a loudspeaker at a spot in Indira Nagar area. No mosque was located in the vicinity.

On Tuesday, Maharashtra DGP Rajnish Seth said the Aurangabad police commissioner will take appropriate legal action against Thackeray over his May 1 speech against loudspeakers in mosques.

Maharashtra home minister Dilip Walse Patil, Seth and senior police officials reviewed the law-and-order situation in the state in the backdrop of the MNS chief’s deadline on removal of loudspeakers.