Protesters had responded to the call for the curfew by reducing the site to fewer than five sit-in demonstrators. 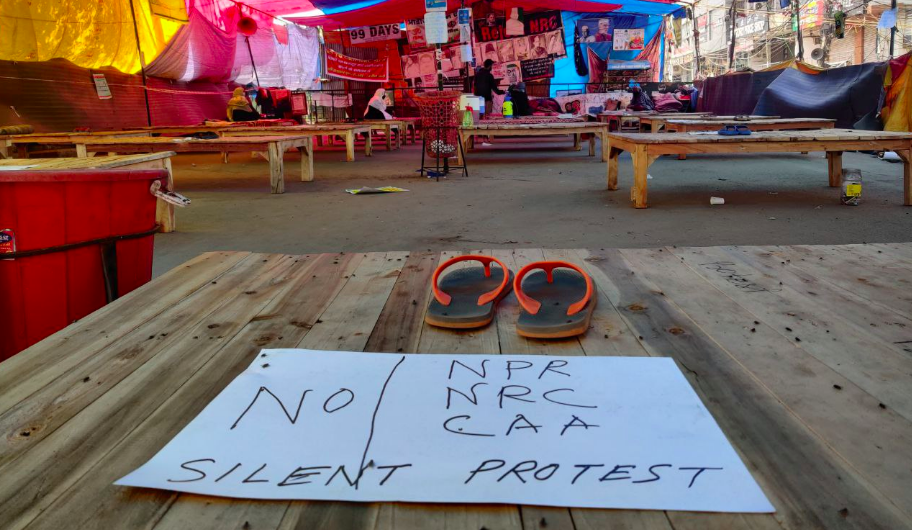 The Shaheen Bagh protest site where sandals had been placed in view of the hazards of mass assimilation during the coronavirus pandemic. Photo: Twitter

New Delhi: At Shaheen Bagh, a petrol bomb was thrown at the protest site by an unidentified person on Sunday morning. Protesters had responded to the call for the janata curfew by reducing the site to fewer than five sit-in demonstrators. The protest had come in the way of intense criticism since the pandemic spread by a section which alleged that the mass gathering was against the social distancing advisory.

A Shaheen Bagh local said that around 10 am, at least one man arrived on a bike at the area in front of the stage, threw a petrol bomb, and made a hasty exit. They say that the police arrived on the scene after this took place, with reports stating the police has found five-six petrol-filled bottles at the site.

Also read: Calling the Protest Off Will Not Dent Shaheen Bagh or Its Legacy

There has been an increase in calls for the protest at Shaheen Bagh to be dismantled in the wake of the novel coronavirus, with a considerable number of people insinuating that the protest was a liability to social distancing, which has been a critical factor in controlling the spread of the virus.

Folks at Shaheen Bagh should now call off their protest. They have made a point. But public safety must override politics. They can assemble later after the Coronavirus subsides. Refusal to do so is a risk to everyone’s health. If they still don’t move, they should be evicted.

As a result, the site has seen a considerable reduction in footfall since the novel coronavirus pandemic has begun.

The protest itself has joined in the janata curfew on Sunday by reducing the people at the site to fewer than five, with sandals symbolically placed on the cots on which the protesters usually sit.

In spite of all this, and in line with the State directives issued to contain the #COVID 19 threat facing our nation, we bravely continue our protest today with only 5 women protesters marking their resistance on behalf of all of us at #ShaheenBagh. (3/4)#JantaCurfewMarch22 pic.twitter.com/jNjfSPYSQU

On the same day, an unidentified man allegedly opened fire and hurled a petrol bomb at the empty protest site outside the Jamia Millia Islamia on Sunday, according to officials and students of the university.

The Jamia Coordination Committee (JCC), comprising current and former students of the university, had temporarily suspended its sit-in protest against the new citizenship law on Saturday in view of the coronavirus outbreak.

In a statement, the JCC said a miscreant opened fire and hurled a petrol bomb at the protest site at Jamia Square, Gate No. 7 of the university.