How the Palghar Lynching Was Relentlessly Communalised on Social Media

Videos of the incident on social media were amplified with an insinuation that it was a communally-motivated crime committed by members of the Muslim community. 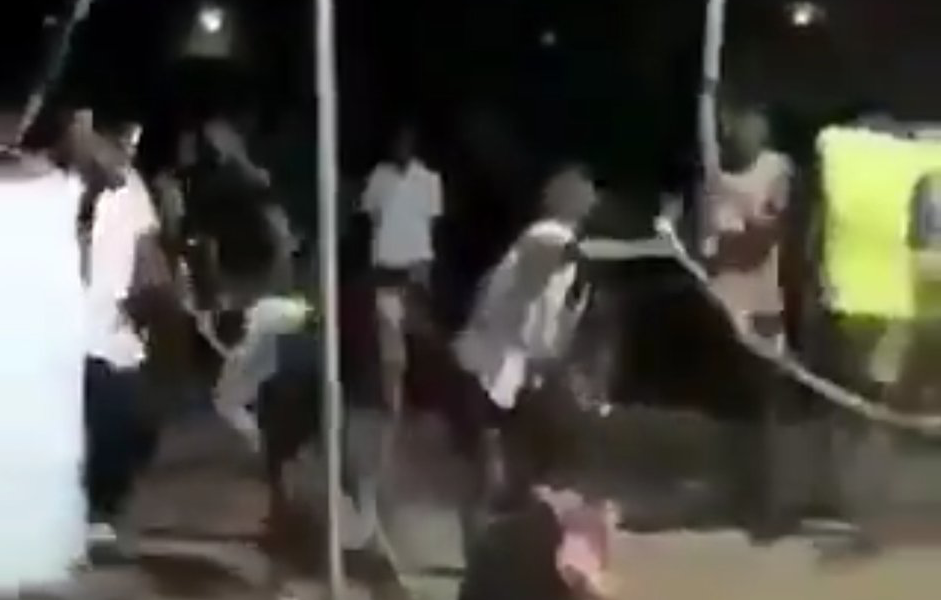 On April 16, three men were lynched by an armed mob near Gadchinchale village which comes under the Kasa Police jurisdiction in Maharashtra’s Palghar district. Three days later, videos of the incident on social media were amplified with an insinuation that it was a communally-motivated crime committed by members of the Muslim community.

One such video of the gruesome incident was tweeted by some individuals with the claim that the mob can be heard saying, “Maar Shoaib Maar”.

Film director Ashoke Pandit twice claimed that the accused involved in the incident is “Shoaib”.

Suresh Chavhanke, the editor-in-chief of Sudarshan News, also claimed that he is able to hear the word “Shoaib” in the video. 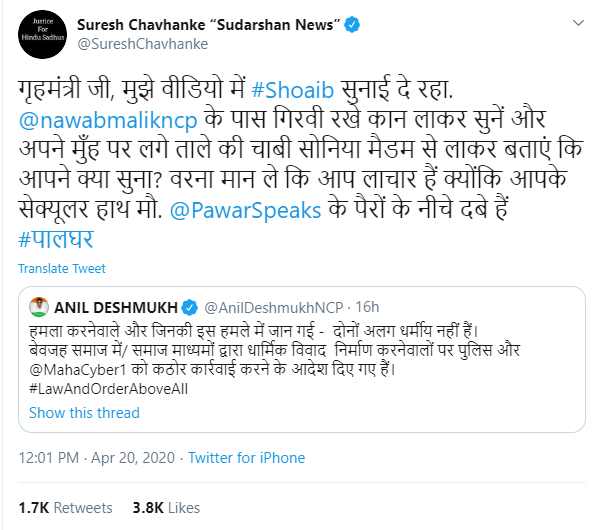 Delhi BJP’s Richa Pandey Mishra tweeted the video with the text, “Hit Shoaib Hit, Kill them”. Similar tweets by handle ‘Yana Mir‘ and ‘This Posable‘ has garnered close to 2,700 retweets combined. Facebook page Our India posted the same video with a similar communal narrative. It has been shared more than 2,200 times. 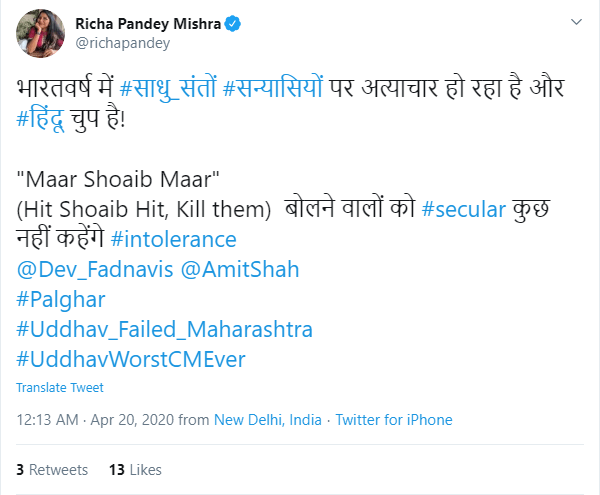 Also viral with a Christian angle

An image of the two deceased men was also shared on social media with a graphic that accuses “the goons of Christian missionaries” for the attack.

#PalgharMobLynching
Sadhus R murdered by mobs in front of police.
Police failing to protect them
Media shows little concern for their plight
In the land of Yoga, dis can’t be tolerated & all groups involved must be made strictly accountable#हिन्दू_संतों_की_हत्या_क्यों❓#Palghar pic.twitter.com/AAu5omyIxn

No “Shoaib” in the video

After listening to several videos of the same incident taken from different angles, Alt News found that the men are saying,  “Bass oye bass (Stop hey stop)”.  In the video posted below, the same can heard. Thus, the claim that one of the perpetrators involved in the incident was Shoaib is baseless.

Did you here at 10 sec what I hear? #JusticeForHinduSadhus pic.twitter.com/6Q2HcKfrzQ

Maharastra’s Home Minister took to Twitter and informed that the incident has no communal angle and that the accused and the victim were not from different faiths.

CM Uddhav Thackeray has also ruled out any communal angle in the incident and said that it had occurred as rumours about thieves roaming in the area were making the rounds.

The incident took place on the night of April 16 when three men were attacked by a mob of local tribals near Gadchinchale village. They were reportedly on their way from Mumbai’s Kandivili to Silvassa to attend a funeral when they were stopped by a vigilante group that was set up by locals to patrol during the night. The mob questioned these men who were travelling in a van. They pelted stones at them and later beat them up with sticks. The police have detained over 100 people and nine minors in connection with the lynching.

Alt News reached out to PRO of Palghar police who reiterated that there is no communal angle to the incident. We were informed that both the accused and victim are from the same faith. The accused belong to the tribal community. The PRO said, “There was a rumour circulating in the area and the police had also issued a message regarding it.” There were reportedly rumours about migrants robbing the tribals village in Palghar district.

Palghar SP Gaurav Singh informed The Indian Express that the investigation into the incident has so far focused on identifying the sources of the rumours spread in the tribal village.

Moreover, according to the 2011 census data of the Gadchinchale village of the Dahanu Taluka, it has over 248 households and of which majority of them belong to the scheduled tribe.

Days before the incident, four police personnel were left injured in an incident where the SUV of a skin specialist Dr Vishwas Walwi of Thane was destroyed at Saarni village by a mob. “At least 250 people had attacked them when Dr Walwi was returning home after distributing food grains and conducting a small door-to-door thermal screening of tribals,” said a report Hindustan Times published on April 17, 2020.

Prominent social media users like Suresh Chavhanke and Ashoke Pandit attempted to give the incident a communal colour by claiming that the men involved in the lynching were members of the Muslim community. The accused and victims both hail from the same religion. There is no communal angle to the incident.