Ziba Murat is one of eight Uyghur people who told Reuters they have spent years searching for information on relatives who were detained and have since been charged and imprisoned in Xinjiang. 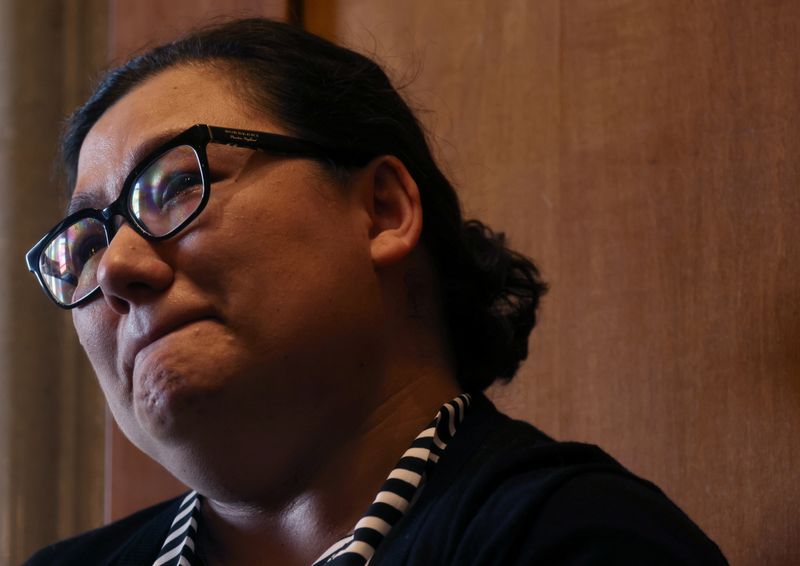 Urumqi: When Ziba Murat last saw her mother, retired Uyghur doctor Gulshan Abbas, at Ronald Reagan Washington National airport in 2016, she begged her not to return to Xinjiang, where reports were emerging about the detention of ethnic minorities.

“My heart started to beat so fast. I told her not to go,” said Murat. “We had already started to hear about the camps being built, but she thought she was safe.”

Shortly after returning home, Abbas told her daughter that her passport was confiscated, without providing details. Murat said their daily video calls became tense, and at times, Abbas would shake her head and cry for no apparent reason.

“I feel so guilty, I think she was trying to send me messages,” said Murat in a phone interview with Reuters.

Murat said she last spoke to her mother on September 10, 2018. The day after, Abbas stopped picking up her phone.

Abbas disappeared six days after her sister, Rushan Abbas, a high profile US-based Uyghur activist, spoke on a public panel at the Hudson Institute, a Washington think tank. She talked about the unfolding internment campaign in Xinjiang. Murat and Rushan Abbas believe the events are linked, which Reuters was unable to independently confirm.

Also read: ‘We Are Very Free’: How China Spreads Its Propaganda Version of Life for Uighurs

Rights groups and UN experts estimate more than one million Uyghurs and other ethnic minorities were interned in a network of camps since 2016. China described the camps as vocational training centers to combat religious extremism and says they were closed in late 2019.

Murat is one of eight Uyghur people who told Reuters they have spent years searching for information on relatives who were detained and have since been charged and imprisoned in Xinjiang.

At media conferences in Beijing this year, spokesmen for the Xinjiang government have repeatedly said China will help Uyghurs living abroad who are unable to contact their relatives, urging them to reach out to Chinese embassies and consulates for assistance.

Almost five years after the internment campaign began, relatives interviewed by Reuters say such requests have fallen on deaf ears. Reuters was unable to independently confirm all aspects of their accounts.

“If all we have to do is call the consulate then pick up the phone when we call,” said Murat. She shared with Reuters, a copy of a letter she sent to the Chinese embassy in Washington on August 5, 2020, appealing for information on her mother’s whereabouts that she says went unanswered.

The Chinese embassy in Washington did not respond to a request for comment.

China denies it has hampered efforts by relatives to find information on detained relatives.

“Some of these Xinjiang natives abroad are bewitched or coerced …and deliberately made up lies about these so-called lost contacts,” Xinjiang government spokesman Zulhayat Ismayil told a media conference in Beijing in February.

China’s foreign ministry declined to comment on its policies on communicating with overseas relatives of people detained in China, and referred Reuters to Xinjiang authorities.

The Xinjiang government and its spokespeople did not respond to a request for comment.

China hasn’t released figures on the number of those sentenced to prison for terrorism or crimes of inciting ethnic hatred. The common charges linked to the anti-extremism campaign – since the campaign began in 2016, or the number of people detained in the camps.

Of the eight relatives of detained Uyghurs Reuters spoke to, six were based in the United States, all of whom said appeals to the Chinese embassy in Washington went unanswered.

For five of the six detained people, relatives said they have received no official information at all on the location of their loved ones or the length of their prison terms.

There is no publicly available documentation on the trials or sentencing of any of the detained people on China’s judicial websites, according to the relatives and Reuters’ checks.

Murat says the only official confirmation of her mother’s arrest is a one-line statement made by a Chinese Foreign Ministry official at a 2020 media conference in Beijing, who said Abbas had been sentenced on crimes of terrorism and “disrupting social order”.

Murat said they had earlier received credible information from a non-official source whom she declined to identify that Abbas had been sentenced to 20 years. China has not publicly confirmed the sentence length and China’s foreign ministry and the Xinjiang government did not respond to requests on the sentence length.

When Reuters visited the former family home which was still owned by her mother in Urumqi in May, the door was still sealed shut with police tape that bore the name of a police bureau in Artux. This is a region near the Kazakh border over 1,000 km (600 miles) from Urumqi.

“Report to the community office if you ever return,” read a notice on the door.

Reuters was unable to contact the police bureau in Artux or the community authority in charge of the building, and questions to the Xinjiang government and ministry of foreign affairs about the notice were not answered.

Rayhan Asat, whose brother Ekpar Asat was detained in 2016, said it took four years for her family to receive information from an official source confirming her brother was detained in Aksu, around 670 km (400 miles) from Urumqi.

“We did everything we could, reached every police station, every state organ to try and find out what happened,” said US based Asat, whose parents still live in Urumqi.

“We were so confused. Why would he be in Aksu? …I think it is a desire to further uproot people and break their spirit,” she said.

Rayhan Asat and her family only learned that Ekpar was sentenced to 15 years for “inciting ethnic hatred and ethnic discrimination” in January 2020 when Chinese officials responded to an enquiry from a US senator, Asat said.

This year, for the first time, her parents were permitted three video calls between three and 10 minutes long with their son, calling from a Chinese police station, said Rayhan Asat. Prison officials told the parents, Ekpar has been in solitary confinement since January 2019 for undisclosed reasons, she said.

Ekpar was arrested within weeks of returning from the United States where he had undertaken the US State Department sponsored International Visitor Leadership program.

Rayhan Asat, a Harvard-trained lawyer, said multiple efforts to correspond with the Chinese embassy in Washington have been fruitless. In 2020, she sent a copy of an open letter appealing for Ekpar’s release, signed by 70 student organisations at Harvard University.

“They opened it, put it in a new FedEx package and sent it back to me,” she said. The Chinese Embassy in Washington did not respond to a request for comment on the letter.

Some relatives say China’s public attempts to discredit Uyghur claims of rights abuses have become a key way to learn more about their relatives detained in Xinjiang.

Officials have released dozens of videos this year including footage of jailed Uyghurs reciting pro-government statements and clips of family members criticising their Uyghur relatives abroad or pleading with them to return to China.

Murat said seeing her mother in such a video would be painful, but still welcome.

“I’m sure I’d be heartbroken but at least she’s alive, then we’d have hope. At this point, I just want to know she’s alive.”