The clip was falsely shared by Sudarshan News and many BJP supporters with the claim that Muslims were loudly chanting on the road after loudspeakers were removed from mosques.

Earlier this month, Maharashtra Navnirman Sena (MNS) chief Raj Thackeray issued a warning to the state government to remove loudspeakers installed in mosques by May 3 or else the party would play Hanuman Chalisa outside mosques in blaring loudspeakers. The debate over loudspeakers has been raging across the country. Uttar Pradesh chief minister Yogi Adityanath issued a directive ordering the removal of loudspeakers from religious places, especially mosques.

Against this backdrop, a video of a group of people reciting Azaan (Muslim prayers) on the road is viral on social media platforms. It has been claimed that Muslims have resorted to reciting Azaan by shouting on the road as an alternative to loudspeakers being removed.

Sudarshan News tweeted the video and wrote, “Could this also be an alternative to the Azaan played on loudspeakers?”. In another tweet carrying the video, the outlet wrote, “If loudspeakers are removed, is this what they will do? Does it mean they won’t follow the law?”

Far-right commentator Madhu Kishwar also tweeted the clip writing, “Despite loudspeakers being removed, these people have found a way to produce noise in the name of Azaan.”

Sudarshan News’s Abhay Pratap Singh amplified the video while warning against the dangers of “such mentality”.

We performed a reverse image search using a frame from the video on Yandex, which led us to a video on ‘One India Kannada’ YouTube channel. It was uploaded on April 8, 2020. Thus, the viral video is at least two years old and has nothing to do with the ongoing loudspeaker controversy.

The description of this video reads, “With the lockdown in effect in India, all temples and mosques have been closed, because of which Muslims did not get an opportunity to offer prayers in the mosque. They then stood on the road and prayed to Allah.”

Taking a closer look at the video, we noticed a shop named ‘Shimla Biryani’ and a board that reads ‘Dr N. Rai’. We reached out to Dr Rai and he said his shop is located in Pilkhana, Howrah.

We performed another keyword search on Google based on this information and came across photos of a shop named ‘New Shimla Biryani’ on Zomato located on GT Road in Pilkhana, Howrah. 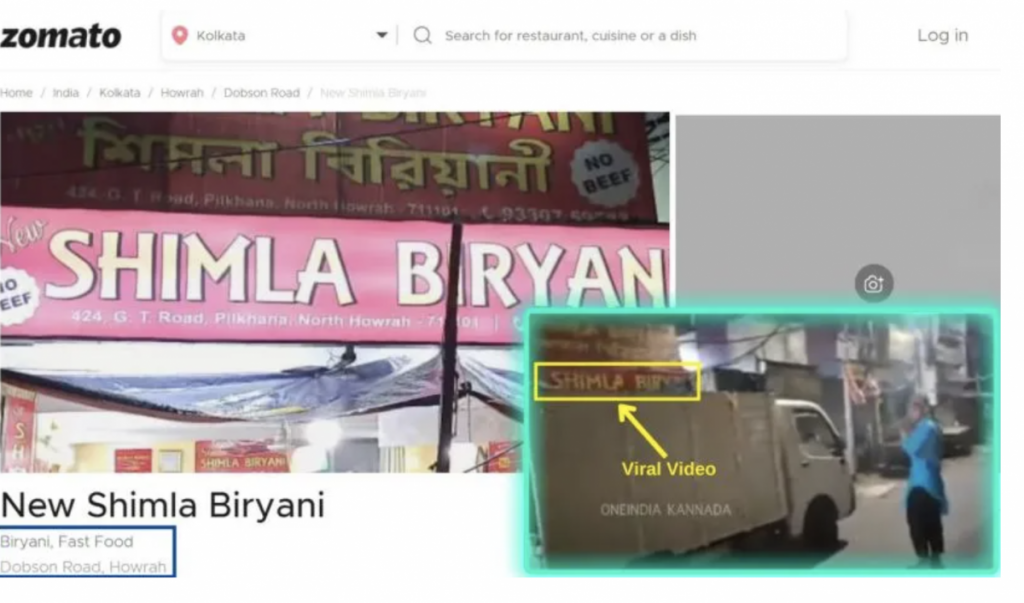 We spoke to a staff member at ‘Shimla Biryani’. He said that the viral video was filmed during the lockdown. It must be noted that the people seen in the video have maintained social distancing.

AltNews reached out to another local resident regarding the matter. He confirmed that the video was shot during the lockdown but he was unable to provide an exact date.

To sum it up, the video in question is at least two years old and has no links to the ongoing loudspeaker controversy. The clip was falsely shared by Sudarshan News and several BJP supporters with the claim that Muslims are loudly chanting Azaan on the road after loudspeakers were removed.

This article was first published on AltNews.