Last year, then external affairs minister, late Sushma Swaraj, had delivered a speech at the inaugural plenary of the OIC meeting in what was a first for India. 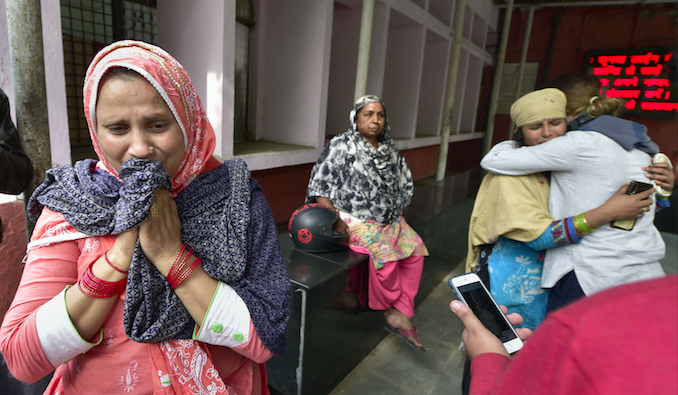 Azra Khatun weeps as she waits to receive the body of her nephew Ashfaq Hussain (22), who was killed during communal violence in northeast Delhi area over the amended citizenship law. Photo: PTI

New Delhi: India’s Ministry of External Affairs on Thursday took grave exception to the Organisation of Islamic Cooperation for its statement on the Delhi violence that has until now resulted in the deaths of 38 people, saying the comments are factually inaccurate and misleading.

The OIC has condemned the violence in Delhi and alleged discrimination against Muslims. It mentioned that the violence and destruction of property had chiefly targeted Muslims.

The communal violence over the amended citizenship law in northeast Delhi has left over 200 people injured.

Ministry of External Affairs Spokesperson Raveesh Kumar urged “bodies like the OIC” not to make “irresponsible statements” at this “sensitive time”.

#OIC condemns the recent & alarming violence against Muslims in #India, resulting in the death & injury of innocent people & the arson and vandalism of mosques and Muslim-owned properties. It expresses its sincere condolences to the families of the victims of these heinous acts. pic.twitter.com/NQjKVoLgXQ

“The statements which have come out of OIC are factually inaccurate, they are selective, they are misleading. There is an effort on the ground, to restore normalcy, to create confidence,” Kumar said.

“We urge these bodies not to indulge in irresponsible statements at this sensitive time,” he said.

India’s association with the OIC has been cordial. Last year, then external affairs minister, late Sushma Swaraj delivered a speech at the inaugural plenary of the OIC council of ministers meeting in Abu Dhabi as the ‘guest of honour’ on the invitation of the host, the United Arab Emirates. That was the first time that India was invited to attend a meeting of the OIC bloc.

Swaraj had asserted that India and OIC members have a lot of common history and values.