On February 25, The Wire's reporters found him slumped on his stomach, with locals alleging that ambulances were not allowed to reach the spot. He was admitted to a hospital six hours after he was shot. 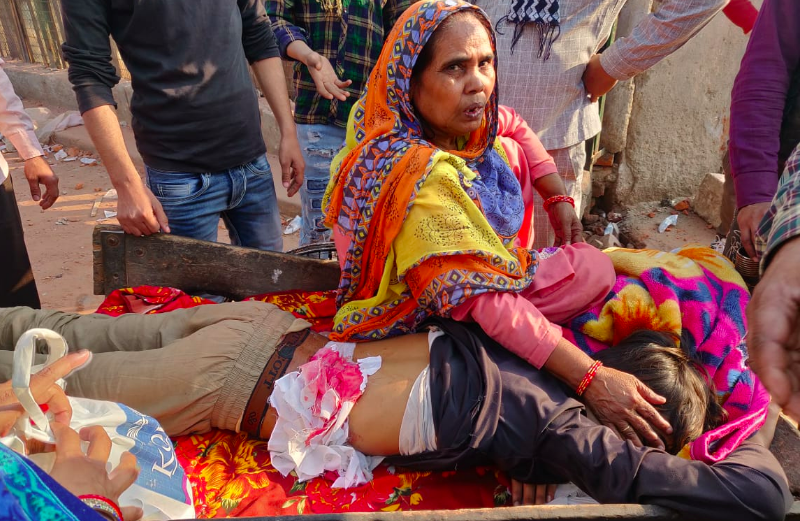 Fourteen-year-old Faizan, who was allegedly shot at by those supporting the CAA. Photo: The Wire

New Delhi: A 14-year-old Muslim boy who suffered bullet injuries in Kardam Puri of Shahdara in northeast Delhi during the Delhi riots is in a stable condition and is recovering at the GTB Hospital, according to The Hindu.

The Wire had broken the story on February 25 of 14-year-old Faizan, who received a bullet wound near his spine. Locals informed The Wire‘s reporters that he was shot at around 11 am, allegedy by Hindutva mobs, and that he had not received any medical care other than first aid because ‘ambulances were not allowed’ to the area.

The Wire‘s reporters found him slumped on his stomach, with locals attempting to offer relief with preliminary care. An ambulance eventually did reach the boy at around 5 pm and he was admitted to the GTB hospital.

The boy, identified as Faizan, had not been a part of protests or clashes but had been in the area to drop off some items to an acquaintance.

According to bystanders that The Wire‘s reporters spoke to, he was shot at at 11 am. Since then, he had not received medical care other than first aid.

“Police have been turning away ambulances that have tried to reach him,” a bystander told The Wire. The reporters themselves saw personnel of the security forces standing in a file less than half a kilometre from the place where Faizan lay by the side of the street.

However, the claim that police have been stopping ambulances from reaching the victim could not be confirmed first hand.

Delhi police joint CP Alok Kumar and the Rapid Action Force’s Bhavesh Chaudhury were both in the area. RAF personnel that The Wire spoke to said a “vehicle” had been called for to attend to Faizan.

The boy, whose mother passed away recently and whose father works in Rampur, lives with his grandmother. Speaking to The Wire, the grandmother said she was extremely scared under the current scenario and had strongly told Faizan not to venture out.

Witnesses at the scene said it was supporters of the CAA who had come in from the Yamuna Vihar area, that lies to the immediate west of Kardam Puri, who shot Faizan.

As many as 38 people have died and more than 200 have been injured as communal violence in northeast Delhi since Sunday.