'No Means to Go to UP, Pay Lawyers': Sleepless Nights for Kin of J&K Students Held for Cheering Pak

In the dark about where their wards are jailed, family members of the three scholarship students, all from poor backgrounds, have pleaded with authorities to show lenience. 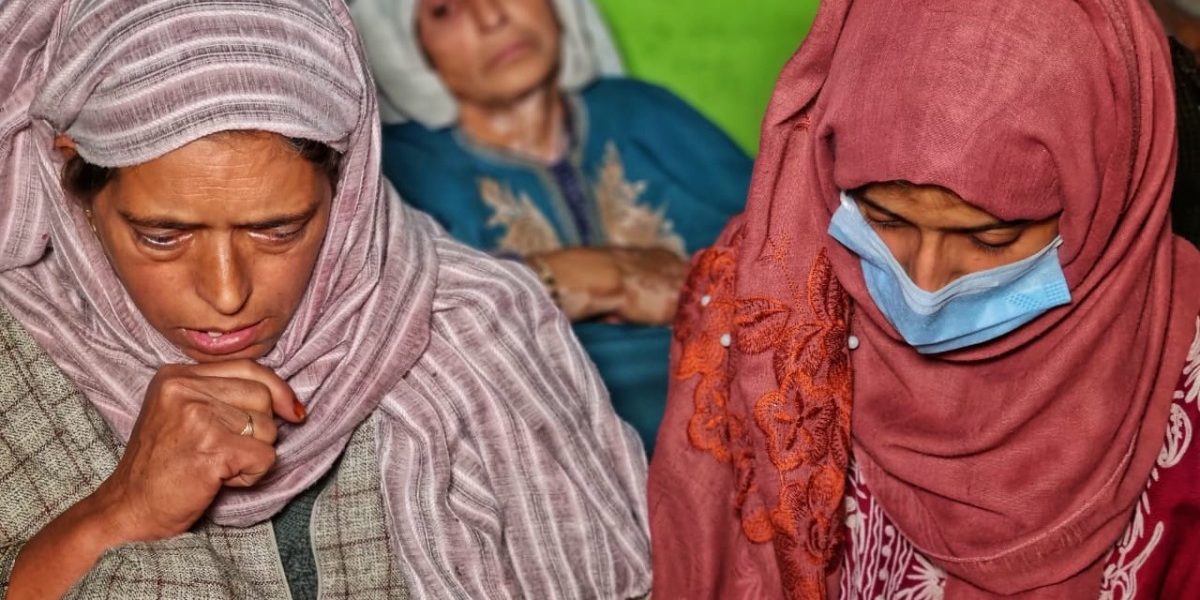 Arshad Yusuf Paul's mother and other relatives at their house. Arshad was held for allegedly cheering Pakistan's victory over India in a T20 cricket match. Photo: Faizan Mir

Chadoora, Jammu and Kashmir: Forty-five-year-old Haneefa’s hands quiver as she begins speaking to journalists. Out of sorts and struggling with the weight of sudden tragedy, she pleads with the government.

“He may have committed some mistake but I appeal to the government to please forgive him. He is my only son, the main pillar of the family. My husband passed away two decades ago, and I have two daughters,” she says in a soft voice before breaking down.

Haneefa’s son, Arshad Yusuf Paul (21), an engineering student at a private college in Agra and a resident of central Kashmir’s Hardichecki Chakpora village, was arrested by Uttar Pradesh police on Tuesday.

He has been charged under sections 153 A (promoting enmity between different groups on grounds of religion, race, place of birth, residence, language, etc., and doing acts prejudicial to maintenance of harmony) and 505 (1)(b) (punishes those who intent to cause or likely to cause fear or alarm among the public, or any section of the public whereby any person may be induced to commit an offence against the State or against the public tranquillity) of the Indian Penal Code and Section 66F (Punishment for cyber terrorism) of the Information Technology Act 2008. 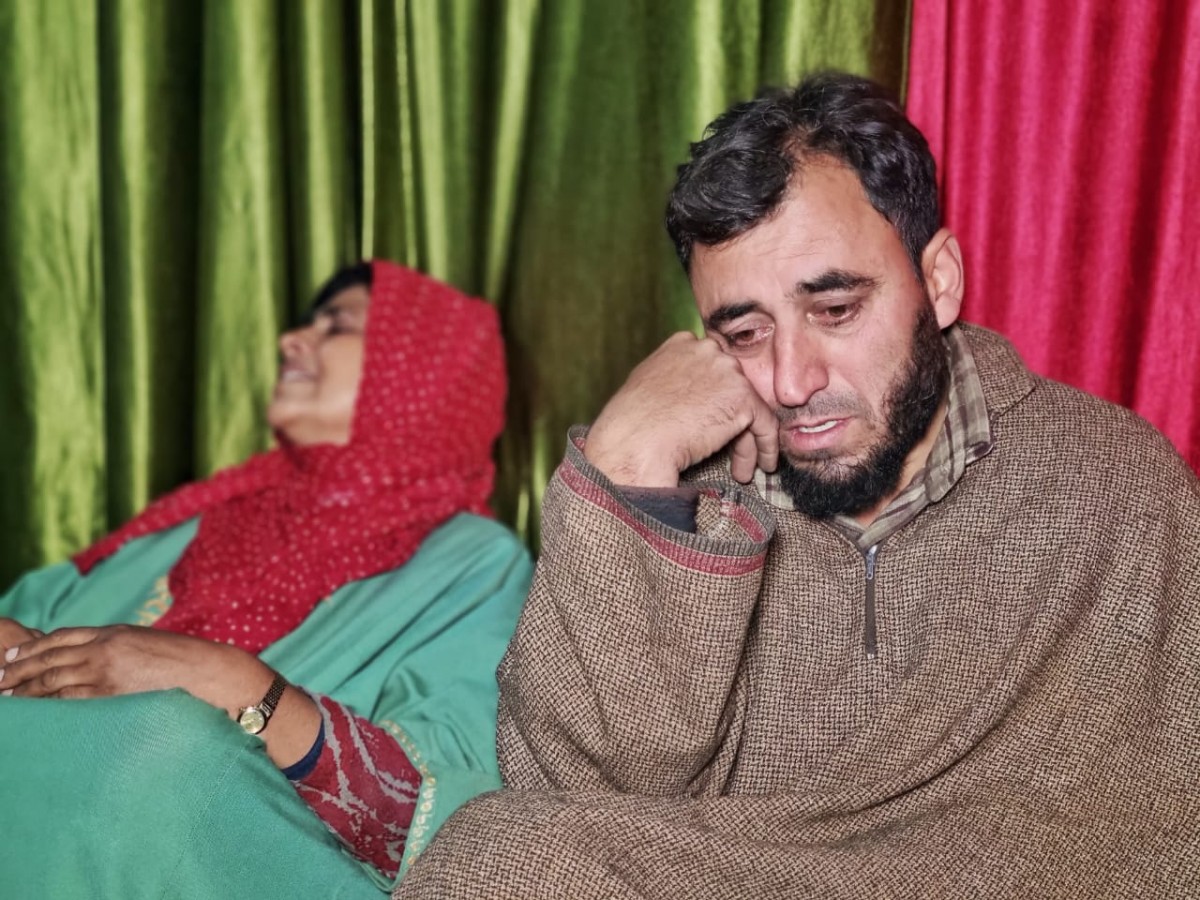 The parents of Inayat Altaf Sheikh who was arrested in UP for celebrating Pakistan’s win. Photo: Faizan Mir

The case followed a complaint by local Bharatiya Janata Party leaders who alleged that “pro-Pakistan slogans” were shouted by Kashmiri students at Raja Balwant Singh Management Technical Campus (RBSMTC) in Agra on Sunday after India lost to Pakistan in the ongoing T20 World Cup.

However, the college administration has denied allegations of sloganeering even though it has suspended the three students.

B.S. Kushwaha, director of academics at RBSMTC told Times of India that the police must take action against the BJP workers for barging into the campus, “misbehaving with staff” and “putting pressure on the (college) management.”

“The college authorities have given these students a clean chit…rather than take the college assurance at face value, the UP police is victimising these poor kids,” tweeted Omar Abdullah, former J&K chief minister.

While the Uttar Pradesh government of Adityanath, has also spoken of invoking sedition charges against the three students following their “objectionable” comments, purportedly on Facebook, their families back in Kashmir are wracked with worry.

“We don’t know his whereabouts,” said Arshad’s uncle, Hilal Ahmad, a labourer, “We heard (about the arrest) through Facebook. When we tried to call him on Wednesday, his phone was off.” 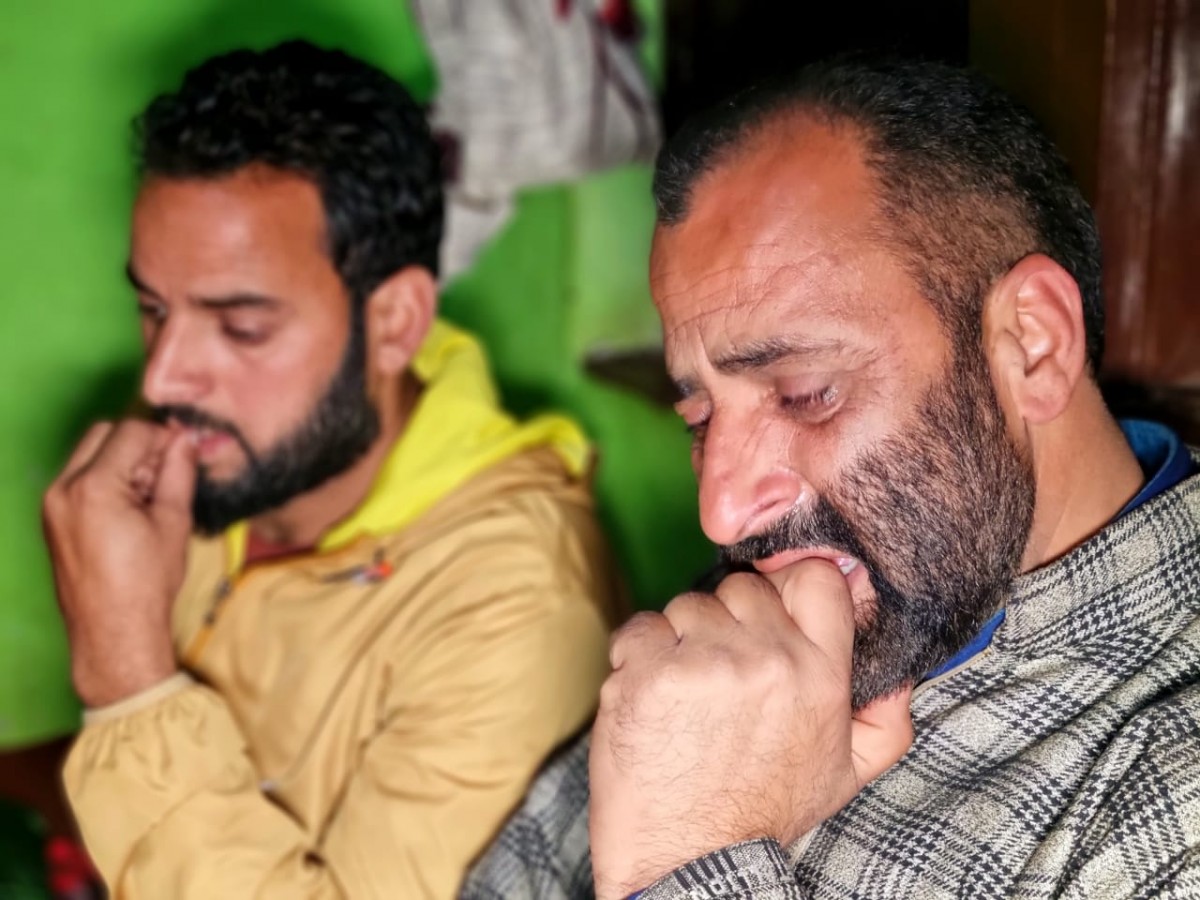 Family members of Arshad Paul who was arrested in Agra along with two other Kashmiri students for celebrating Pakistan’s cricket win. Photo: Faizan Mir.

All the three arrested students come from the underprivileged Kashmiri families and are studying under the Prime Minister’s Special Scholarship Scheme which was launched by the Congress-led United Progressive Alliance government under Manmohan Singh, in 2010.

The scheme, which came after months of intense mass protests and killings of dozens of civilians, had started showing results. Arshad is the only member across his extended family of two uncles, their four sons and two daughters, and more than a dozen cousins who appeared set to complete a graduate degree.

For most others who are of age in his family, poverty had forced them to drop out of school.

“He was looked upon as a role-model in the family. We don’t know if he will be able to resume his education now. His career has been destroyed,” said Hilal, his uncle.

The family does not have the financial resources to arrange for travel from Kashmir all the way to Agra to meet Arshad. Nor can they explore legal options.

“We are hand to mouth. Our father and uncles worked as labourers. We are daily wage earners too. We don’t have land. We are poor and too ignorant [to arrange for help in Agra],” said Hilal.

On Thursday, a video showed the students being physically attacked when they were produced before a court in Agra which sent them to 14 days of judicial remand. The attackers were heard shouting slogans such as “Pakistan murdabad” (‘down with Pakistan’) and “Bharat Mata ki jai“.

3 Kashmiri students who were arrestd & booked under Sedition Chrges for cheering pak aftr India Pakistan match roughed up in police presence by the right wing actvists after they were produced in the court in Agra, UP pic.twitter.com/RRT3Sea9ao

Hilal continued: “We saw the video but what could we have done? We are very far from him and helpless. He has not committed any crime. We don’t even know why he has been arrested. He is a child but he is being treated like a criminal.”

Among those who criticised the lawyers’ behaviour was Omar Abdullah.

The behaviour of the lawyers is unacceptable & the role of the police is deeply suspect. With polls around the corner rather than make friends with Kashmiri students the powers that be are happier using them as political cannon fodder.

Hilal is glad that policemen were present in the court premises at the time of the attack, “Had the cops not been there, those people could have done anything. They looked blood thirsty,” said Hilal.

Among the three families, only Inayat’s has managed to send a cousin, Sameer Ahmad to Agra. Sameer reached Agra with a friend on Friday and was searching for accommodations to spend the night in when he spoke with The Wire over phone.

“A lawyer told me that the Agra Bar Association has decided not to fight the case on his behalf. I don’t know what we should do now,” Sameer, a pharmaceutical trader, says.

“I don’t know which jail they have been lodged in. I am too afraid to visit the police station,” he adds.

Meanwhile, the third student Showkat’s distraught family arrived in Srinagar’s Press Enclave on Friday. Accompanied by Showkat’s anguished aunt and some neighbours, his parents appealed to the administration of Lieutenant Governor Manoj Sinha to intervene in the matter.

“I don’t have resources to secure his release. We are a poor family. My son reached this stage because of the government’s scholarship. If he’s committed any mistake, I appeal the governor to pardon him,” Showkat’s mother Hafeeza said. 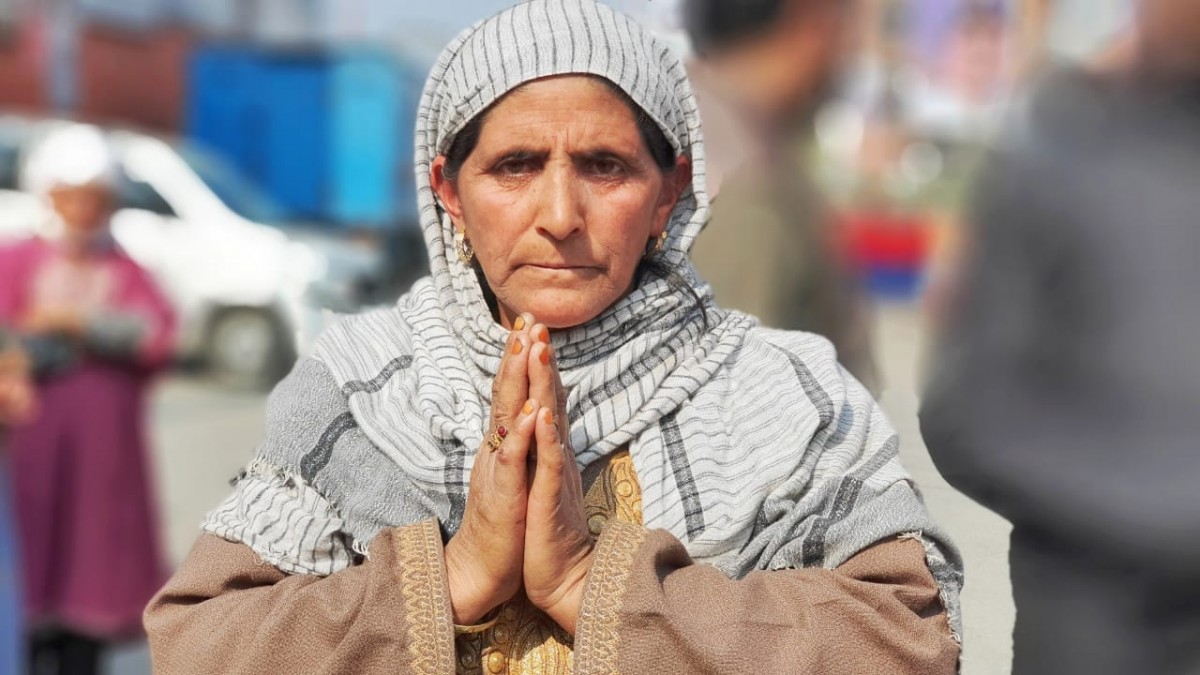 Hafeeza, mother of Kashmir student Showkat Ahmad who was arrested in Agra, at the Press Enclave, Srinagar. Photo: Faizan Mir

Amid talk of sedition charges being invoked against the trio, former Supreme Court judge, Justice Deepak Gupta, has said the tweet from the Uttar Pradesh Chief Minister’s Office stating that Kashmiri students who celebrated Pakistan’s victory would be charged with sedition is “a tweet against the law of the land”.

“A thing may be good or bad but that does not make it a crime or illegal. All legal actions are not necessarily good or moral. We are governed by a rule of law not a rule of morals,” the retired judge said in an interview with Karan Thapar for The Wire.

The celebrations over Pakistan cricket team’s first victory against India in a World Cup match evoked a strong reaction from the J&K administration also which has also sacked a health department employee in Jammu’s Poonch district for posting“objectionable comments” in her WhatsApp status.

The Jammu and Kashmir Police has also registered two separate cases under the draconian anti-terror law against the students and non-teaching staff of two medical colleges in Srinagar who allegedly celebrated the Pakistan cricket team’s victory over India.

Crackdown on Kashmiri students both within J&K & outside is reprehensible. Situation in J&K after two years of suppression should’ve been an eye opener for GOI & lead to course correction.BJPs pseudo patriotism disregards the idea of India. Release these students immediately https://t.co/3kCVPns36x