"Centuries of struggle are coming to an end today," the prime minister said. "I'm sure hundreds of people can barely believe that they are alive to see this day." 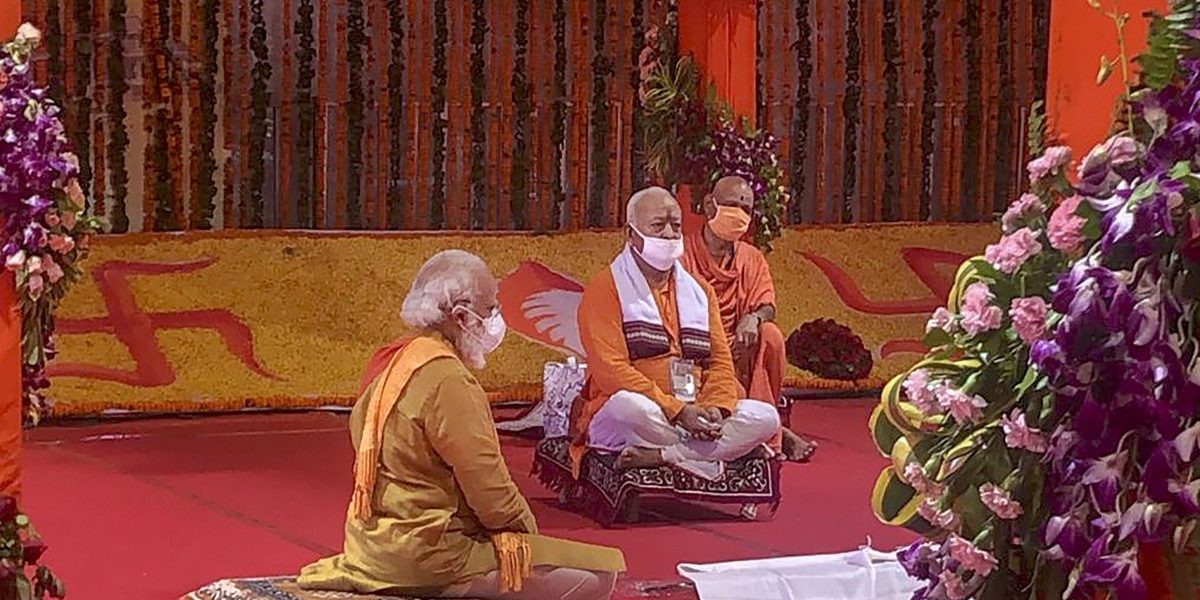 New Delhi: Prime Minister Narendra Modi on Wednesday attended the bhoomi pujan (ground-breaking ceremony) for a Ram temple to be built in Ayodhya at the site where the Babri Masjid stood for five centuries till it was demolished in 1992. The bhoomi pujan ceremony for the temple – conceived by the Vishwa Hindu Parishad in 1989 – was attended by several Bharatiya Janata Party and Sangh parivar leaders including Uttar Pradesh chief minister Yogi Adityanath, UP governor Anandiben Patel, RSS chief Mohan Bhagwat and yoga guru and businessman Baba Ramdev.

On arriving in Ayodhya, the prime minister first offered prayers at the Hanuman Garhi temple and then planted a parijat sapling at the temple site. Then the official bhoomi pujan began. It concluded a little before 1 pm.

Once the prayers were done, Adityanath, Bhagwat and Modi addressed the gathering. Their speeches were broadcast live on Doordarshan and also through loudspeakers set up at locations around Ayodhya. “Today is an auspicious day,” the chief minister said. “This marks the end of decades of struggle. A journey of over 500 years has been ratified by the Indian judiciary and constitution,” he asserted.

In its verdict last November, the Supreme Court handed the disputed site to the Hindu litigants, clearing the way for them to build a temple, while also noting that the demolition of the mosque in 1992 was a crime. Ironically, the criminal trial of the BJP and Sangh leaders accused by the CBI of conspiring to destroy the Babri masjid has still not been completed.

Adityanath thanked the prime minister on this “emotional day”, saying Modi had not only taken India to new heights, but also ensured the development of Ayodhya and culmination of a decades-old movement to build a Ram temple. Underlining the party political significance of the event which BJP leaders have tried to market as a national celebration the chief minister also used his party’s ‘sabka saath, sabka vikas‘ slogan.

Bhagwat spoke next, calling the event a “joyous occasion” and a “new beginning for a new India”. The RSS has been dreaming of this day, he said, and that dream is finally coming true. “Though who sacrificed themselves for this cause are with us in spirit,” he said. He also brought up L.K. Advani (whose rath yatra is seen as the one of prime stages in the agitation which led to the demolition of the Babri Masjid), saying while he could not attend due to COVID-19, his role was important to remember.

Modi began his address by raising slogans praising Lord Ram. “The echoes of this slogan can be heard around the world today,” he said. “I am honoured that the temple trust invited me here, gave me the opportunity to be a part of this historic event.”

“Centuries of struggle are coming to an end today,” he continued. “I’m sure hundreds of people can barely believe that they are alive to see this day. Our Ram Lalla has been living under bamboo sticks, now we will build him a real temple. This land, where Ram was born, has got its freedom today from the cycle of being broken and rebuilt.”

“The Ram Mandir will become the modern symbol of our traditions. It’ll become a symbol of our devotion, our national sentiment. This temple will also symbolise the power of collective resolution of crores of people. It will keep inspiring future generations,” Modi said.

Modi attended the religious event as prime minister even though questions had been raised about the appropriateness of his participation as a constitutional functionary.

Though the BJP has claimed that a grand Ram temple was destroyed by Babar to make way for the Babri Masjid, historians say there is no evidence and the court too refused to endorse the Sangh’s arguments in this regard.

From Wednesday morning, the area outside where the bhoomi pujan took place was crowded with people. Most of them were locals from Ayodhya, as the Uttar Pradesh administration had set up barricades to limit entrance into the city. Members of the BJP, VHP and other right-wing Hindu groups, however, held simultaneous prayers in various parts of the country.

Chief minister Yogi Adityanath had asked people to watch the event on TV and light lamps in their homes instead of coming to the venue, but crowds gathered nonetheless. TV channels showed how people had gathered on top of nearby buildings to try and get a glimpse of the prime minister. 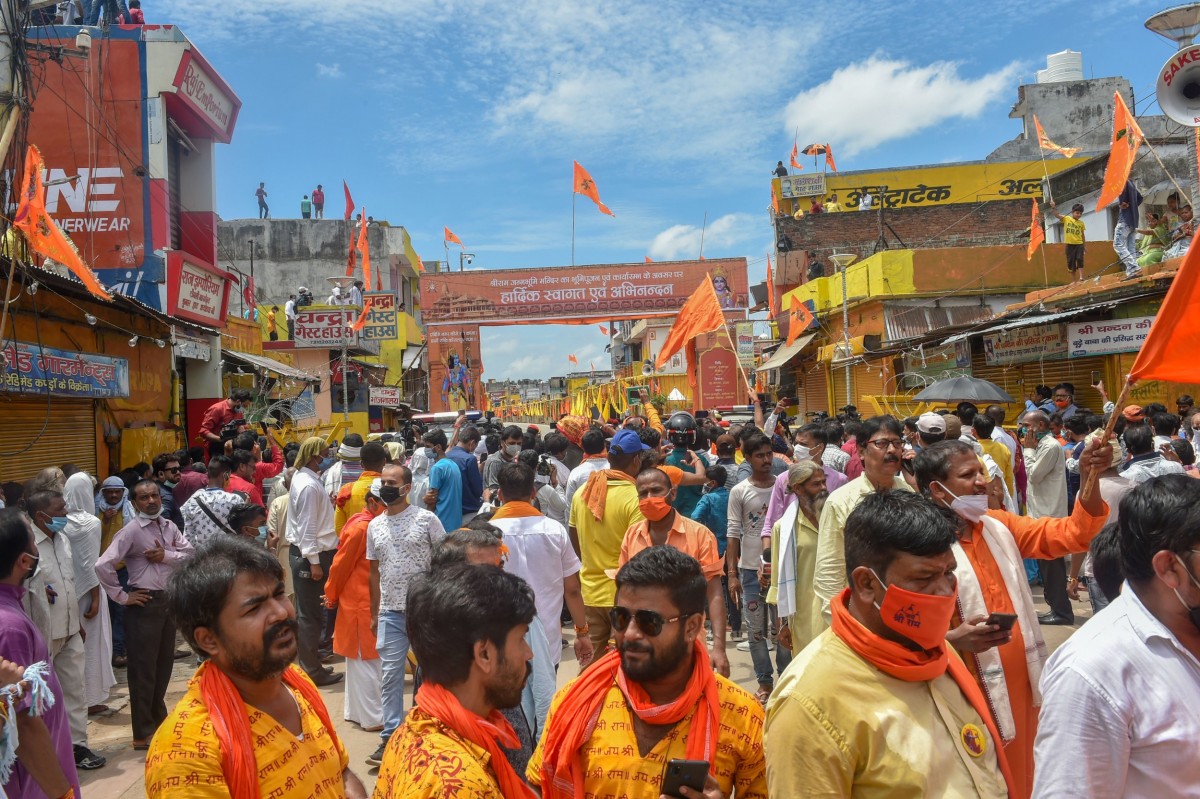 While no official COVID-19 do’s and don’ts were released, attendees of the ceremony wore masks and appeared to be sitting in demarcated spots at some distance from each other, unlike the people gathered outside. As the event progressed, though, several attendees either removed their masks or pulled them below their noses.

In preparation for the August 5 event, large parts of the city of Ayodhya had been painted yellow, considered an ‘auspicious’ colour. Questions had been raised on the choice of date – August 5 also marks exactly one year since the Narendra Modi read down Article 370 of the Constitution, and revoked Jammu and Kashmir special status and statehood. It was also suggested that the government leaders not go ahead with this event in the middle of the COVID-19 pandemic.

Missing from the bhoomi pujan were a few senior BJP leaders who have had key roles to play in the Ram Janmabhoomi movement and the destruction of the Babri Masjid. L.K. Advani and Murli Manohar Joshi, for instance, were not on the list of invitees, officially because of their age and the COVID-19 risks attached. Others who are named in the conspiracy case on the demolition of the mosque, however, including BJP leader Uma Bharti and three members of the Ram temple trust – Champat Rai, Nritya Gopal Das and Kameshwar Chaupal – were present.