Without a doubt, Ansari was the target of the prime minister's wrath because he is the senior-most Muslim in public life.

Without a doubt, Ansari was the target of the prime minister’s wrath because he is the senior-most Muslim in public life. 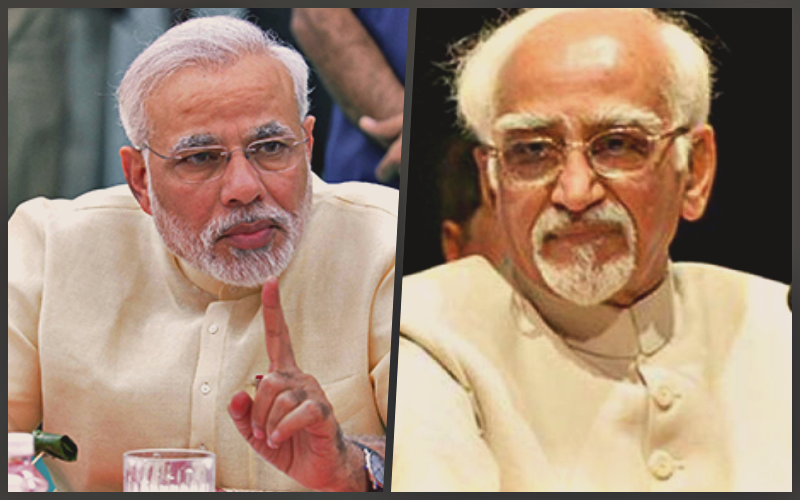 Narendra Modi is definitely the best orator India has seen in a long while, but we must remember that he chooses his words with extreme care. So when he referred to the slaughter of Muslims in Gujarat in 2002 by saying that he would feel fain even if  a puppy came under the wheels of  his car, he meant to convey something that many of us missed. In the same vein, the very sharp words that he selected for the farewell speech of India’s longest-serving vice president carried a message that we need to understand.

Mohammed Hamid Ansari is a seasoned diplomat, he also knows the value of each word. So when he decided to state in his last interview as vice president that there is a sense of insecurity among India’s Muslims with “the breakdown of the ability of the authorities” to enforce the law, he was very serious. He bemoaned the fact that traditional Indian values of tolerance are not visible today, when mobs are lynching Muslims on the beef ban issue.

Can we see what it was in these sentiments that could provoke the prime minister to get so personal and dismiss the brilliant career of one of India’s most dignified public figures as “just” a West Asia specialist? As a prime minister who decides to look into each and every senior posting much more than anyone else before him, and thereby delays these orders for months and years, he knows perfectly well that diplomats and civil servants do not decide their own postings. In fact, this is the same Modi who rushed to every important Arab leader before his new-found bonhomie with their arch enemy Israel. This remark could, therefore, be cleverly resetting of South Block’s priorities, so that all ambassadors from that region can now report home what India’s prime minister felt about Ansari’s ‘Middle East connection’. That would be really sad – in one stroke, it could damage the carefully-nurtured goodwill that generations of Indian foreign ministers, secretaries and ambassadors have built in West Asia so tirelessly. They successfully deprived Pakistan its critical advantage with fellow Muslims in so many countries and, of course, managed to ensure a lasting supply of India’s most necessary commodity, oil.

It was nice of Modi to admit, even while taking a jab at the diplomat and former vice president, that he had not really understood the nuances of diplomacy before he became prime minister. But that did not deter him from flying all over the world and hugging every head of state, whether they liked it or not. These hugs could neither get us the support we needed for Nuclear Suppliers’ Group membership, nor did we move any closer to a permanent seat in the UN Security Council. In fact, we do not have a single friend in the neighbourhood except Bangladesh, which is not happy with us at all. Even the only ‘Hindu rashtra‘, Nepal, is more angry with India now than it was under the UPA. All the dramatics of suddenly dropping in without invitation or notice to say ‘happy birthday’ to then Pakistan Prime Minister Nawaz Sharif on December 25, 2015 backfired completely. International diplomacy, unfortunately, does not run like state or zilla parishad politics, where personal equations matter more. Thus, instead of blaming diplomacy as too tricky a business, he could have begun by appreciating the specialisations of life-long diplomats, like Ansari’s in Arab matters, rather than running them down.

Coming back to facts: Did the prime minister or the BJP really want the outgoing vice president to say that Muslims are indeed very happy at the beef ban and the lynchings, or that the latter have never taken place? Is it not the duty of constitutional officers to tell the government when an ‘offside’ or ‘foul play’ is happening, much too often and obviously systematically? Especially if the incumbent happens to be India’s senior-most Muslim? This is exactly the point. The planned outburst was aimed at the apolitical vice president only after the person he feared most, Pranab Mukherjee, had retired. Modi chose a moment when he could hit out at Ansari and to make it look ‘political –’ he had to drag on what his ancestors did for the Congress. The Ansari family’s chief contribution was to India’s freedom struggle, not to a party as was imputed, and it is a different matter altogether that the RSS, the force that runs the government, chose not to participate in this historic movement. Hindutva’s founder, Vinayak Damodar Savarkar of the Hindu Mahasabha, did go to jail for anti-British activities. But then he also wrote a series of mercy plea letters to the British, promising all the help they need if only he was released. The BJP must take a clear stand on what exactly its views are on Mahatma Gandhi’s civil disobedience, the Quit India movement and other critical struggles in our nation’s history that its predecessors shunned, instead of taking potshots at those who suffered for the nation as Congress party members.

Sadly, the prime minister also interpreted Ansari’s post-retirement career in the Aligarh Muslim University and the National Commission for Minorities as “being only in Muslim circles”, hinting that his worldviews are restricted. But did Modi or Amit Shah ever work beyond their own culture, politics and religion? Do the Hindi belt leaders, who love to decide everyone’s diet, know even one language or culture of this great country that lies beyond go-kshetra? Tamil may be a difficult language, but if these Hindi-only cadres took the trouble to learn Odia or to understand a bit of Kodava or the Konkani culture, they would have realised the beauty of a plural India they never knew existed. Ansari is the epitome of refinement; he does not share the views of Muslim extremists and is thus comparable to Maulana Azad and Zakir Hussain where culture and plurality are concerned. It is sad that those whose professional qualifications do not come anywhere near his, like the aggressive Kailash Vijayvargia, are let loose to attack Ansari.

Let us be clear, Ansari was chosen for Modi’s barbs because he is India’s senior-most Muslim in political life. The message was an extension of the one the BJP put out before the Uttar Pradesh polls, when it did not put forth even a single Muslim candidate. This message is that ‘Muslims just do not matter and we do not care about them’. We have to see how long this ruthless, immoral electoral calculus will continue to work for them. What such repeated messages will instigate in the less patient section of the 18 crore Muslims of India is yet to be seen. While extremists on both sides may soon be ready for more violence, the great civilisation called India will not be.

This article was originally published in Bengali in the Ananda Bajar Patrika.