With Suvendu Adhikari's speeches, it is clear that the 'Pakistan' narrative has gained ground in BJP's campaigns in Bengal. 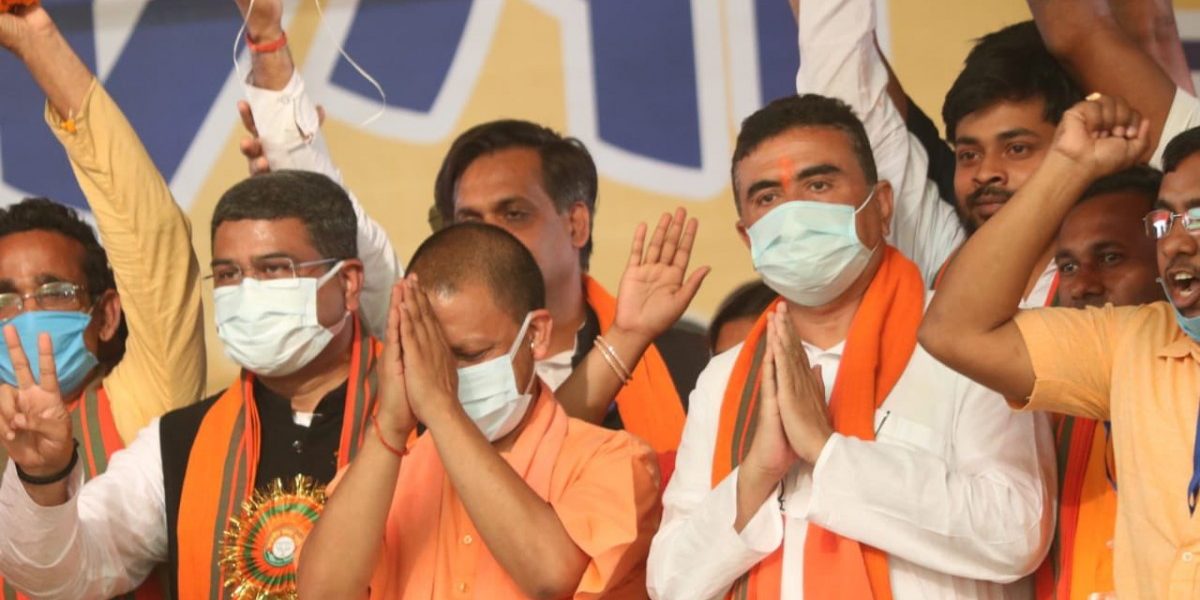 Kolkata: The Bharatiya Janata Party’s candidate’s speeches in Nandigram – the epicentre of the fight for the West Bengal assembly – has come to be centred around words like ‘Pakistan’, ‘begum’ and ‘Eid’ in what is turning out to be a campaign targeted at communal polarisation.

While speaking at a public meeting in Nandigram on Monday, March 29, Bharatiya Janata Party leader and candidate from the seat Suvendu Adhikari said, “If begum comes back to power, the state will turn into a mini Pakistan.”

‘Begum’ refers to chief minister and Trinamool Congress chief Mamata Banerjee and appears to be a reference to Banerjee’s closeness to the Muslim electorate. For the past few days, Adhikari, in all his public meetings in Nandigram and surrounding areas, has referred to Banerjee as ‘begum’.

“Mamata regularly says ‘Eid Mubarak’, it has become a habit of hers. So much so that, on the occasion of Dol (the spring festival in Bengal, usually preceding Holi), she wished everyone ‘Holi Mubarak’,” said Adhikari, before making the ‘mini-Pakistan’ reference.

“She is trying to act like a Hindu now. She acts according to the seat she is campaigning for. While campaigning in Egra, she was reciting the kalmas (Islamic phrases). In Nandigram, she was chanting the wrong Chandipath (Hindu mantra),” said Adhikari on Monday.

Two days ago on March 27, while speaking at a public meeting at Daudpur in Nandigram, Adhikari said, “Never have I seen Pakistanis’ hooliganism in Nandigram before now…Nandigram needs to take stand. Will it vote for begum and ultimately make Sufian stronger?”

Sheikh Sufian is a TMC veteran in Nandigram and one of the key faces of the Bhumi Ucched Pratirodh Committee that spearheaded the anti-land acquisition movement in the region in 2007.

On March 20, while speaking at a public rally in Nandigram, Adhikari said, “Do you want the son of Medinipur’s soil or do you want to see Nandigram through Sheikh Sufian’s eyes? They have created a small Pakistan in various gram panchayats. If Pakistan wins a cricket match, they burst crackers, distribute sweets and eat meat. Do you want to hand over Nandigram to them…think about it.”

Adhikari has been keen to highlight the names of TMC’s Muslim leaders and further the polarisation narrative.

Concern over the fact that Banerjee will be spending her time in Kolkata if she wins from Nandigram has found root across Nandigram, The Wire found.

Pallab Jana of Birulia gram panchayat said, “If Didi wins, she will move back to Kolkata. It’s obvious she won’t stay here. Then to even get a caste certificate, we need to go to Sufian’s house. We can’t accept that.”

The anxiety over Sufian’s Muslim identity, manufactured through BJP’s campaigns, is heightened by morphed photos of Mamata Banerjee wearing a hijab and offering prayers, that have been doing the rounds on WhatsApp.

Adhikari, on March 7, had addressed Banerjee in a rally, saying, “No one accepts you as Bengal’s daughter here.”

Nandigram assembly constituency is spread across two blocks, Nandigram 1 and Nandigram 2. In Nandigram 1 block, 34-35% of the population are Muslims, whereas the figure is at around 10-12% in Nandigram 2 block. Overall, a quarter of Nandigram’s voters are Muslims.

In the 2019 Lok Sabha election, BJP got 62,000 votes from Nandigram assembly segment. Political observers believe most of the votes that went to BJP were against Suvendu Adhikari, who was then in the TMC, rather than pro-BJP.

With Adhikari keen to live up to BJP’s expectations of him, his campaign this time has proceeded on openly communal lines. Many in Nandigram believe that the anti-Adhikari votes had been cast by former supporters of the Left who had been harangued by Adhikari’s men.

“Adhikari thus needs his voters to think of themselves as Hindus and forget that they were ever against him. Pakistan and polarisation are ways to bring this about,” said a local who requested not to be named.