The report, prepared by civil rights activists, has further alleged that the police probe into the incident was "grossly compromised" in order to "protect the Hindus." 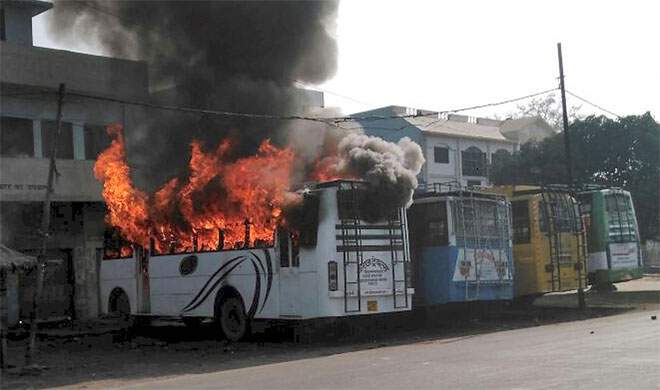 New Delhi: Muslims were “selectively targeted” in the wake of the January 26 communal clashes in Uttar Pradesh’s Kasganj and the police probe into the violence was “grossly compromised”, a report prepared by civil rights activists has alleged.

The report – Truth of Kasganj – also alleged that there were “inconsistencies” in the police version of the violence and there were attempts to protect certain people. The activists also demanded a “high-level inquiry” into the clashes.

Communal clashes had broken out in the western Uttar Pradesh town after stones were pelted on a ‘Tiranga Yatra’ taken out to celebrate Republic Day.

The police had said some people were riding motorcycles carrying the tricolour and were chanting ‘Vante Mataram’ and ‘Bharat Mata ki jai’. When they reached a minority community-dominated locality, some “anti-social elements” pelted stones and opened fire. In this firing, 19-year-old Chandan Gupta was killed and two others were injured.

The activists also alleged that there was “discriminatory delivery of justice” to favour and protect certain people, based on majoritarian agenda.

The police investigation into the violence has been “grossly compromised in a blatant attempt to protect the Hindus and frame the Muslims”, the 21-page report alleged, adding the administrative and police “failed” in preventing the violence.

“As enunciated in the report, we demand from the Uttar Pradesh government to terminate the current ‘tainted prosecution’ of the two chargesheets, and constitute a high-level official inquiry into the administrative and police failure in preventing the January 26 violence and its escalation once the police reached the spot,” Setalvad said.

The activists also pledged to move the Allahabad high court through a PIL, seeking a fresh police investigation directly reporting to and monitored by the court.

The activists also sought action against the alleged right-wing people from the motorcycle rally and investigation into their “role” in the violence.

The activists, present during the launch of the report, alleged “many inconsistencies” and “distortions” in the police probe.