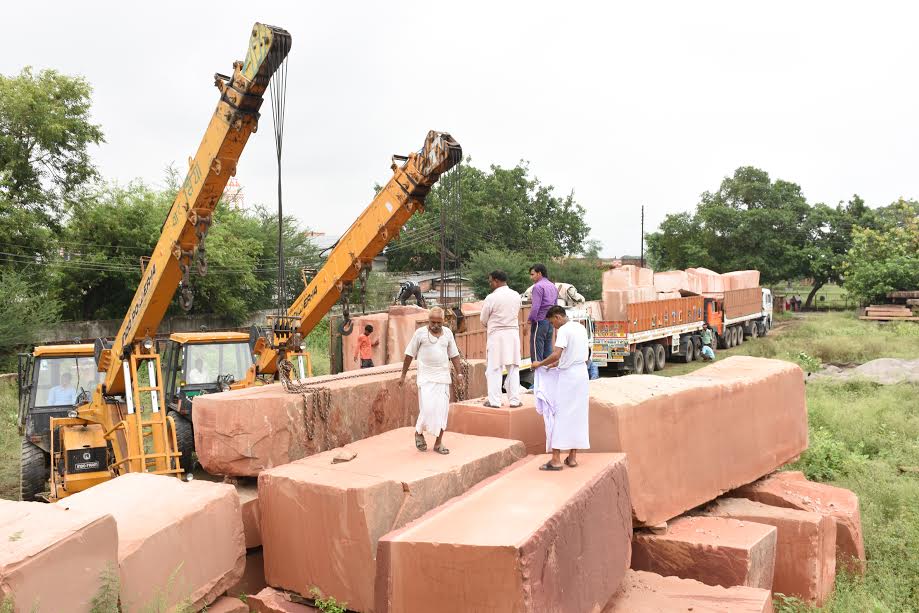 Ayodhya: The All India Muslim Personal Law Board, concerned over the arrival of stones in Ayodhya for the construction of the disputed Ram temple, will lodge a protest before the government and the Supreme Court.

A series of the arrivals of stones to be used in the construction of the Vishva Hindu Parishad (VHP) proposed Ram temple structure has made Muslim organisations restless.

Muslim leaders and clerics are also of the opinion that the activities that have started in Ayodhya recently may disturb the communal harmony and peace and that these activities must be banned at once.

Talking to The Wire, Sayed Qasim Rasool Ilyas, senior member of the All India Muslim Personal Law Board, said, “We will lodge a complaint in the Supreme Court over the arrival of stones as it is contempt of the apex court. The matter is subjudice before the court and the VHP is gathering stones in Ayodhya for the construction of Ram temple. We will demand a ban on these activities.”

Mufti Hisbullah, a party in the Babri Masjid/Ramjanmabhoomi case said that the activities that have been growing day by day may disturb the communal harmony, as by doing this, the VHP leaders are playing with peace and law and order.

Senior member of the All India Milli Council and also a party in the Babri Masjid/Ramjanmabhoomi case, Khaliq Ahmad Khan said, “The state government, by ignoring the VHP’s illegal activities, is pushing Uttar Pradesh into a state of anarchy. The state government must ban the import of stones by the VHP.”

Baadshah, president of the Ayodhya-Faizabad unit of Jamiat Ulema-I-Hind (a party in the Babri Masjid/Ram Janambhoomi dispute), has demanded the immediate ban on the arrival of stones and also on their carving for the Ram mandir.

Maulana Baadshah said that Jamiat will too move to the court demanding the immediate ban on all activities being conducted by the VHP.

Haji Mahboob, a plaintiff in the case said, “If the VHP continues with the import of stones for Ram Mandir, then the Muslim community will be bound to gather construction material for Babri Masjid in Ayodhya.”

Meanwhile, Ram Janambhoomi Nyas president Mahant Nritya Gopal Das, on Thursday, announced the start of the construction of Ram Mandir before the Lok Sabha polls. He said three parts of the proposed Ram temple are complete and for the fourth part of the temple, import of stones will continue.