Yasser Arafat’s post merely lauded the courage of the people of Gaza. But comments made by trolls gave it a communal colour that the police seemed too eager to act upon.

Lucknow: All 32-year-old Yasser Arafat had wanted to do on the night of May 19 when he posted a pro-Palestine image and comment on his social media page was display the courage with which residents of the battered city of Gaza were standing up to Israel.

But the citizen journalist from Saraimir town in east Uttar Pradesh’s Azamgarh district was not only trolled by Indian supporters of Israel, but actually arrested in the early hours of May 20 by the Azamgarh police and placed in a lock-up. Although he was out on bail by the evening of May 21, the experience was so harrowing that, according to his family, he remains in a state of shock even today.

Arafat’s post on his Facebook page, which he calls Azamgarh Express and on which he usually posts local news that is sometimes combined with his own views, had simply noted that in Gaza the coming Friday, every house and every vehicle would fly the Palestinian flag.

But some readers among the Azamgarh Express page’s 17 lakh followers appeared to have misread the post as an appeal by Arafat for every Muslim in Azamgarh to raise the Palestinian flag in their home and on their vehicle on the coming Friday.

Although Arafat was quick to post a clarification, Indian supporters of Israel trolled him relentlessly, demanding to know why he had asked his readers to raise the flag of another country in India. 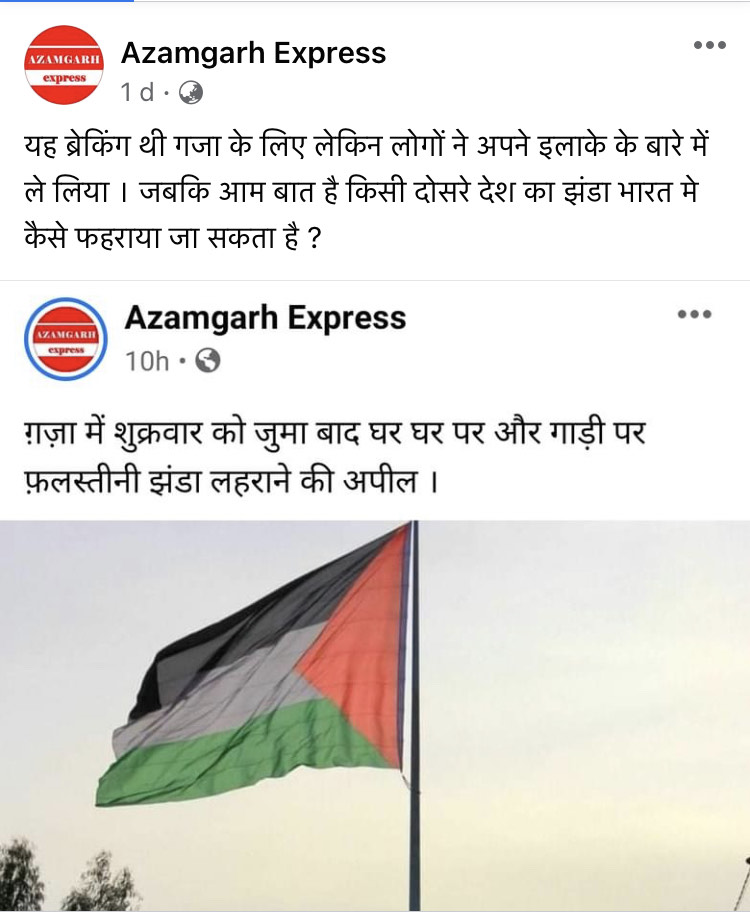 Within hours of this trolling, the Azamgarh police arrived at Arafat’s home and arrested him.

In early 2020, the Azamgarh police had become infamous for the violence with which it lathi-charged Muslim women during the anti Citizenship (Amendment) Act protests. The brutal act earned it the reputation of being anti-minority and when Arafat was arrested last Wednesday it appeared that nothing in the past year had changed its attitude.

According to Arafat’s family members, the citizen journalist had voluntarily removed the “objectionable” portions from his post as soon as he saw the sharp and venomous reactions to it by a section of his readers. He had even made a quick clarification of his intent in posting the image and making the comment. But by then the trolls had given the post a distinctly communal colour.

Soon after the police arrested him, his home was raided by the Special Operations Group (SOG), an anti-militancy task force. However, according to Arafat’s family, the SOG agents found nothing objectionable in his residence.

“My brother was implicated by the police just to satisfy those who are in power even though he is innocent,” Arafat’s brother Shahid told The Wire.

Also read: ‘Our Lives Are Shaped by Violence’: Kashmiri Artist Detained for ‘We Are Palestine’ Mural

Anil Singh, the station house officer of the Saraimir police, said that the police had arrested Arafat because he had “indulged in public mischief”. “Communal tension started brewing in the town after his post went viral and to avoid any untoward incident, we had to arrest him,” Singh told The Wire.

However, the police officer refused to comment when he was asked why no action was taken against those who had given the post a communal twist.

Arafat is now too terrified to speak to anyone. “He is in a state of shock and has not interacted with anyone since he came back home,” said Shahid. “Apparently the police raid and the interrogation caused him much mental and physical trauma.”

India has been a staunch supporter of Palestinian self-determination since 1947. In 1988, India was among the first few countries to recognise Palestine’s self-declared statehood.